As you know I'm not in the league of getting myself a Northern Bay, Duffy, or any of the other incredible boats out there. I also know that the Dyer isn't technically a Downeast boat, being built in RI.

However, being in the industry I've been given an opportunity to steal a 1977 Dyer 29 soft top for around 50K, repowered in 2005 with a Yanmar 4LHSTE, soda blasted and barrier coated in 2010, rigged with radar and pilot (which of course would be immediately replaced with a Furuno NavNet3D system). I plan on sea trialing it this coming week, and I've heard a lot of great things about the Dyer hull. I'd be using it in the Long Island Sound and as far east as Block Island Sound and Montauk. I was hoping I could find someone here who may have owned a Dyer and could provide some input on how they run in a following sea, certain things to look for, etc. The boat isn't listed so I don't have any good pics yet, but I looked at it on Saturday evening and she is in great shape, although I need to have the decks checked out as well as the hull as far as moisture and delamination go. Any and all information would be extremely appreciated. This forum is like my home, and I trust everyone's opinion here as the whole member base is filled with old salts who have seen it all and more. Thanks in advance.

:!:Also, I just got a major order of really rare find BlueStar Furuno NavNet equipment, including two MFD12s, two DRS4D radars, a DFF1 sounder, PG500R heading sensor, as well as a TZTouch TZT9! I will be posting the prices soon in the 'Discount DE Electronics' section , ans tomorrow Simrad is also announcing their Winter Rebates that are from the 12th of Nov. to December 30th. Making the final push for the end of year volume.:-o
C

The 29 Dyer is by far the finest riding vessel under 30 feet that I have ever had the pleasure of running. I have canyon fished on one and the boat never let us down.
The hull is solid glass so there is no need for any worries in that area. Most had aluminum fuel tanks with an equalized hose connecting them. If they are originals or even the second set they most likely are due for a change. The tanks can be slide out easy, however it requires engine removal.
The decks were plywood over glass and most likely they will need some careful going over.
The other spot to check is the corners of the windshield frame as they a prone to rot; unless yours is made of teak then you are good. The teak option was about 1K back in the day.
You power for that vessel is perfect and the Yanmar 240 HP is bullet proof.
50 K is a very fair price for both seller and buyer.
Keep us posted 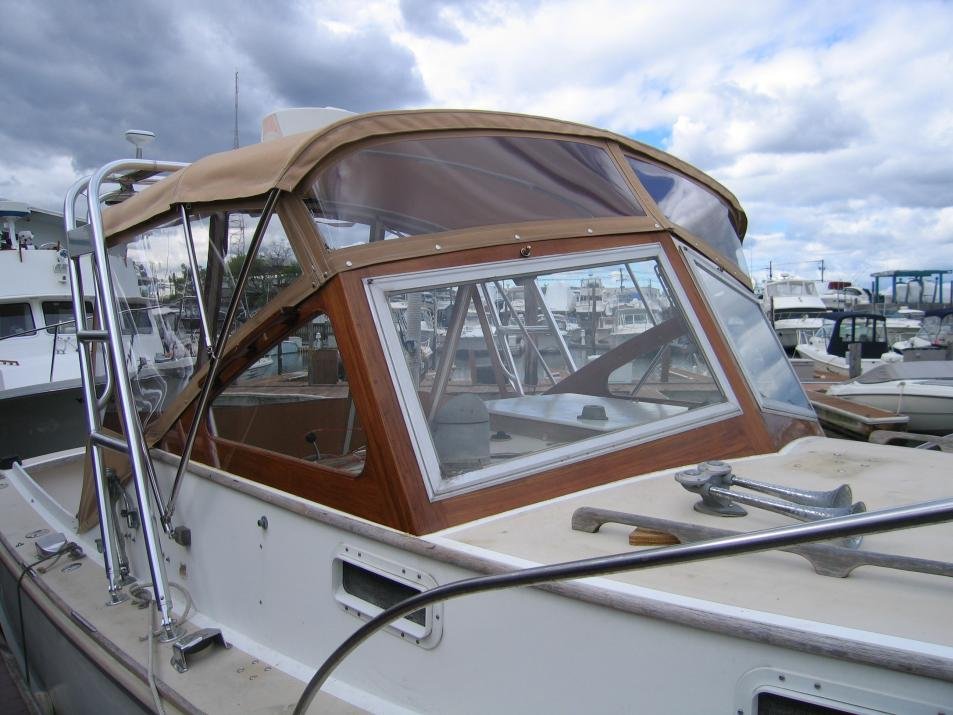 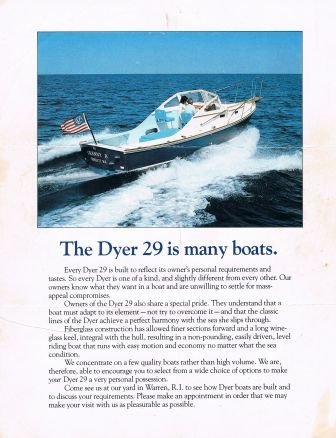 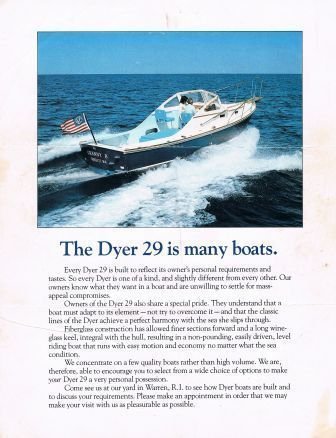 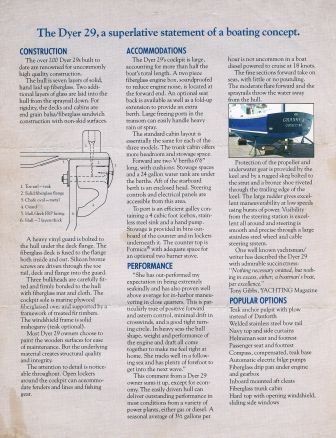 Awesome response, thank you for the pic and literature clippings. I've always known the Dyer to be a seaworthy boat, but never researched it as much as I have now. The more I read, the more I'm impressed.

The boat in question does in fact have the teak windshield option, which is in beautiful condition, freshly varnished. I'd say the decks are my biggest concern, as you said, they're plywood and look weathered. The boat seems to suit my needs, which is a boat that can handle a heavy chop here in the Sound, economical enough with fuel to get out east, and I love that LH engine, even more than the LY that I've seen in a few other Dyer repowers. Also, knowing the owner, he never pushed the engine past cruise RPM, and after a quick look over the engine, the only pieces I think would need replacing would be the exhaust elbow, and the strainer looked like it may actually be the original. Obviously I'll have my boss do the survey, we're Yanmar Gold Plus dealers and he's honestly one of the sharpest diesel minds I've ever met. The visibility with the bimini seems to be a little restricted, it doesn't have the isenglass above the windshield like in the picture you posted, but I would imagine most days the bimini would be off. Thanks again for the comments, I can't tell you how appreciative I am to get a real perspective on this boat. It will be my first, and I've been searching for the perfect boat for 5 years now, and this seems to be a real steal. Going to be an interesting week.

I fished on one years ago when I was a mate on several charter boats in high school. She was a very seaworthy boat with an excellent ride. I loved fishing on it. The owner had a solid wheelhouse custom built and she looked really sharp. That has always been my one complaint about the 29 Dyer, they have a seaworthy hull with beautiful lines but they either have soft tops or the wheel house looks like shit. That and the interior looks like they came straight out of 1968. Wish they would modernize the look. That being said, I'd love to own one, a truly great sea boat.

Chris,
I don't know much about those boats but get yourself a good flashlight and a rig a mirror on a pole or stick and try to get a look at the deck undersides to see if any spots are rotten or have been leaking, check back by the scuppers and anywhere you think water may have had a chance to get under the glass and the plywood. Good luck on the buy if you go ahead on it. I'll be calling ya on my pilot install and i'll be needing a jog lever for it.
Steve
B

The Dyer 29 is a great boat and very nice lines. But IMHO that boat is 35 years old. That is getting old.....even repowered I think 50K is on the far end. I would think 40K tops for a boat that old, fiberglass doesn't last forever.
C

Glad you found the inforemation useful. Back in 1984 I did a lot of research on the Dyer & 31 JC. That was when I was in the market to buy a new boat. This Post on N/E has some aditional information on the Dyer. 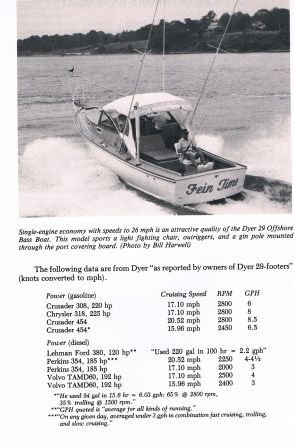 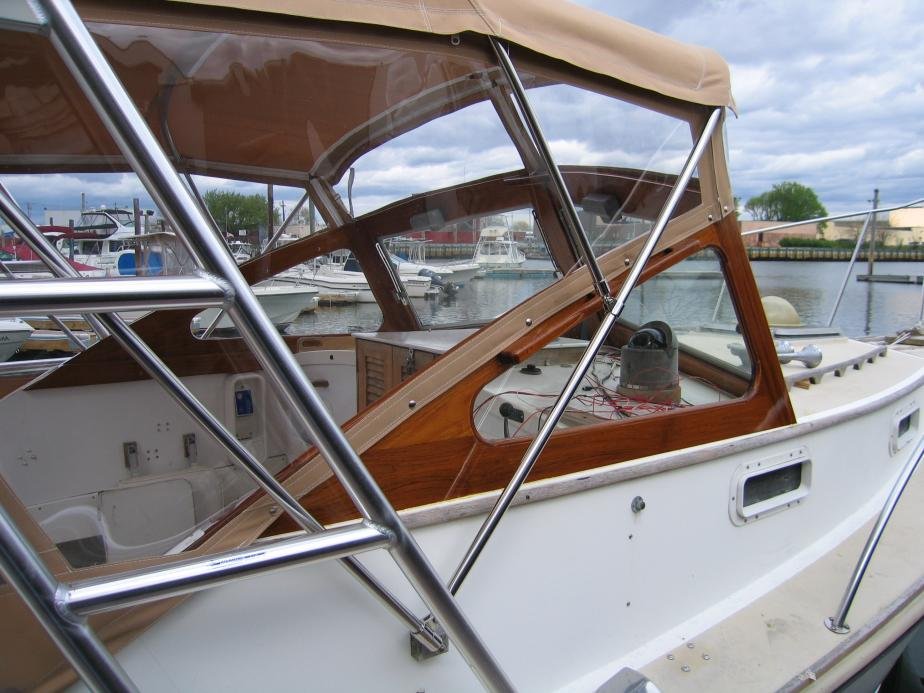 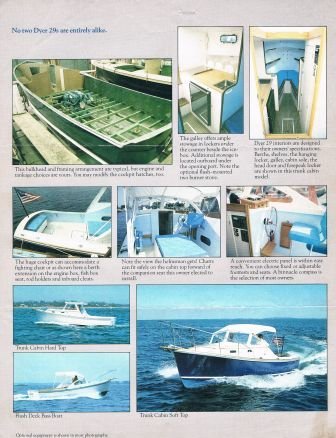 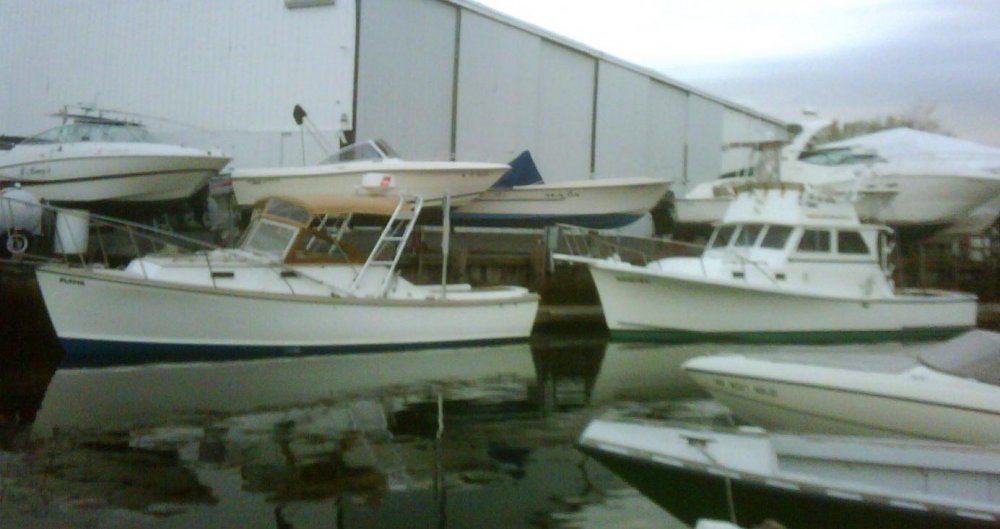 Chris,
is this a flush deck or trunk cabin?

jojobee said:
Chris,
is this a flush deck or trunk cabin?
Click to expand...

It's a trunk cabin model. Here's a side profile pic. 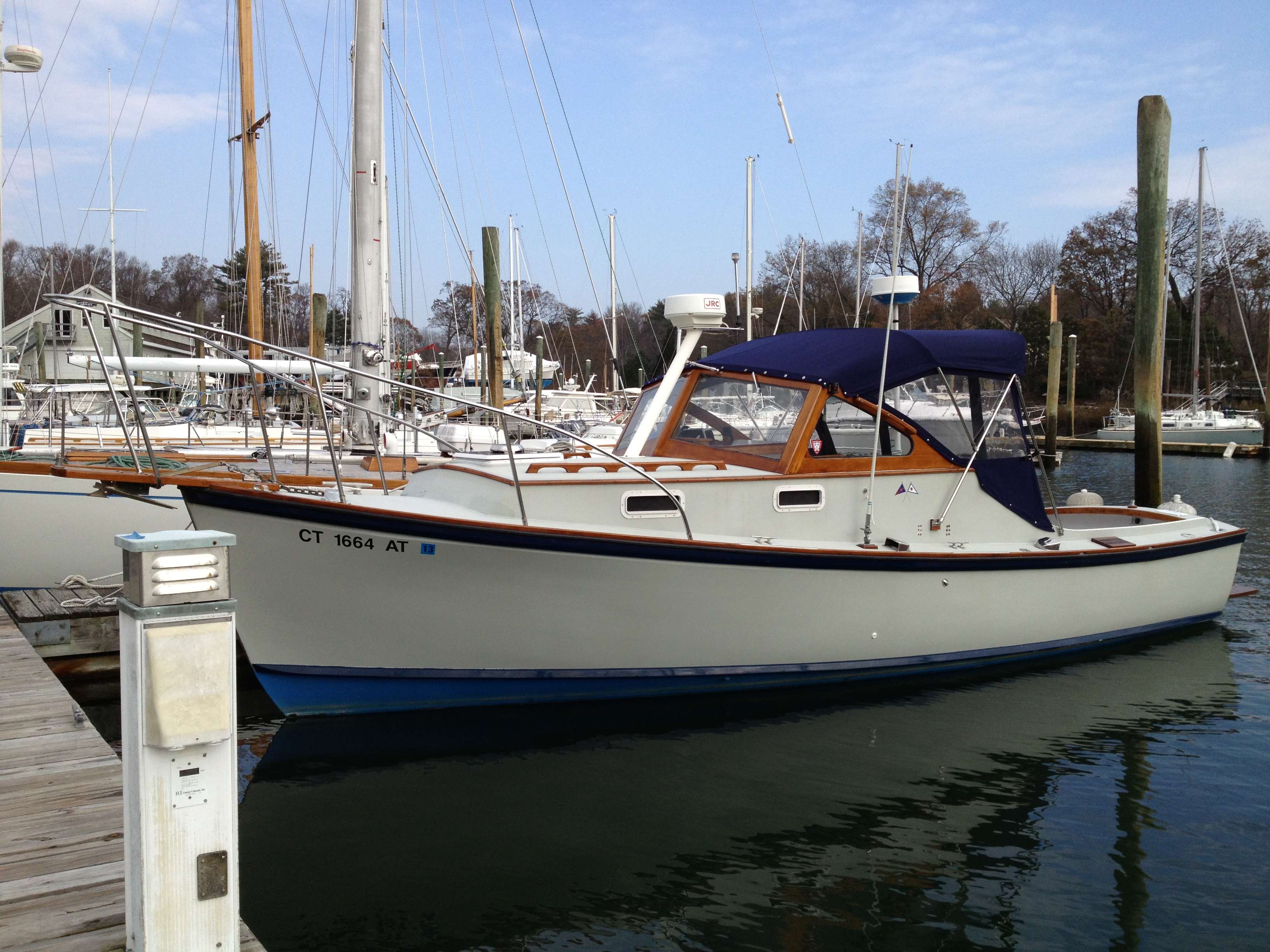 Here is one of my favorite looking 29s.

A digital camera works good for getting into places you cant get to get a look at things.

It is a great sea boat. It can get rolling when anchored due to the relatively narrow beam and soft chines, but more than makes up for it when it gets snotty out. Down sea the handling is not bad. You get the hang of it fairly quickly. I have been out in some pretty crappy conditions and never felt I didn't have enough boat. Go for it. I think 40K would be the number for one of that vintage. Tad Jones at Dyer in Warren R.I. loves to talk about his boats and can probably give you the history of the one you are looking at.
Duke 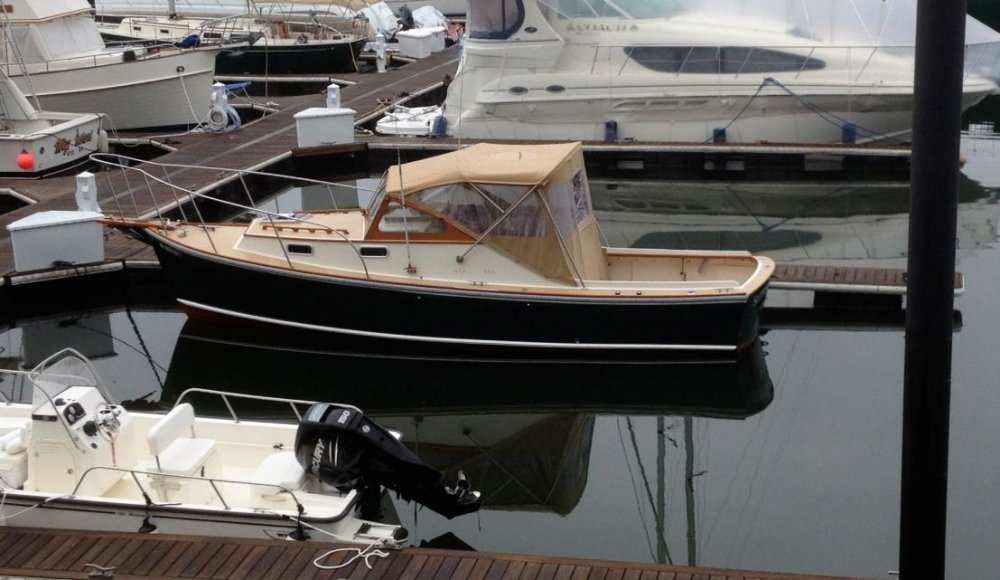 Here is some information, from about the time, the boat your are shopping was built.
Duke 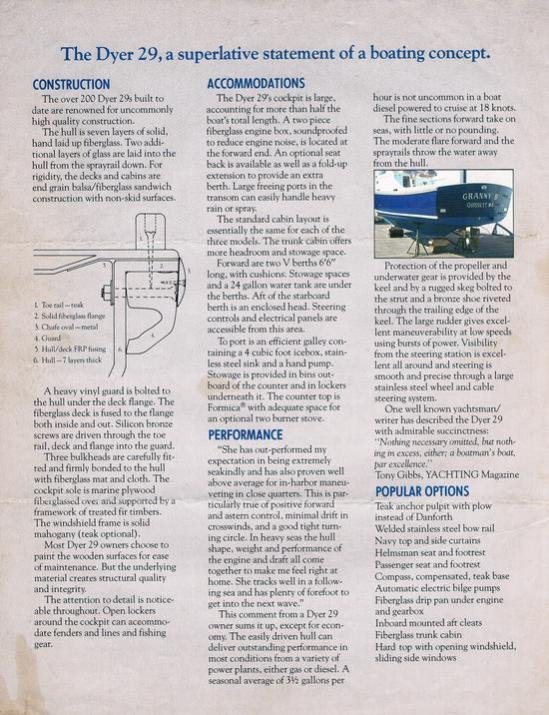 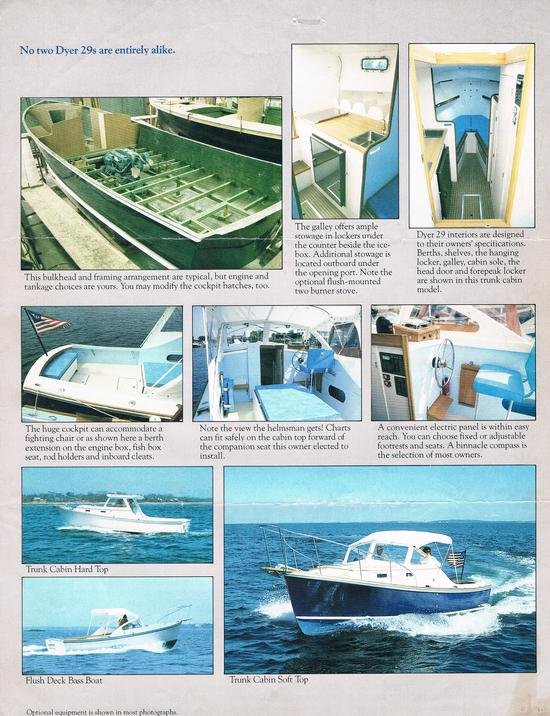 You will love the Dyer 29. For the size, there is no better riding boat. I'm a bit partial since I'm been running one now for 16 years out of Narragansett Bay. We have been caught in plenty of bad weather, and she has always got us home comfortably. If you have any questions, please contact me. We've set her up for inshore spring fishing, and when the weather windows open, we have fished the canyons from East Atlantis over as far SW as the outer Dip. Everytime I want to get a bigger boat, I remember that I can do a canyon run(overnight) on less than 100 gallons. What boat does that? Good luck with her!

Sorry for the double post on the literature. I didn't notice that CaptainLarry had already posted that information. I'll see what else I have lying around.
Duke
C 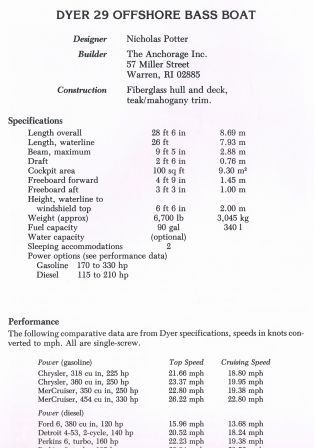 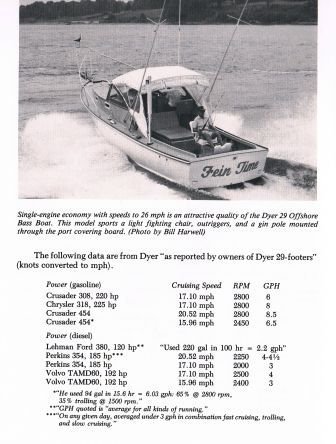 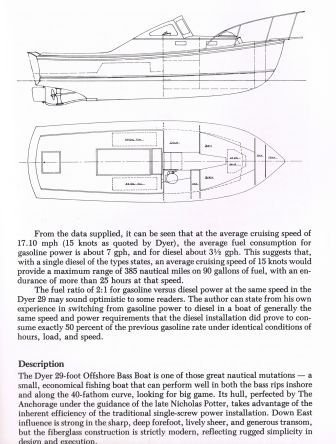 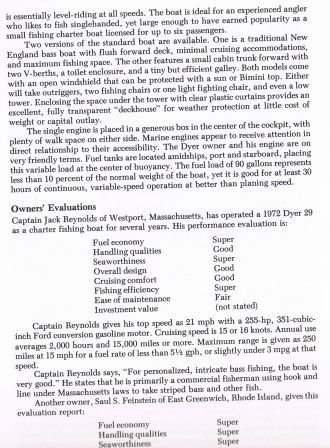 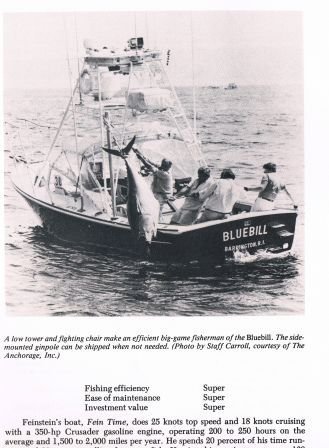 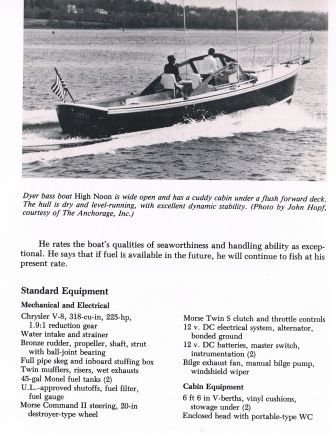 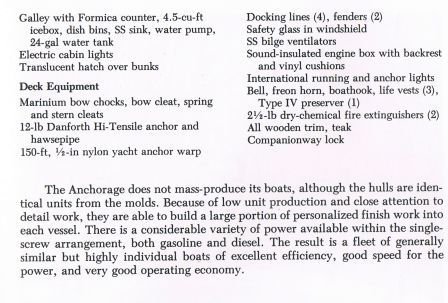 hey Wharf Rat - what happened? did you pull the trigger? I am considering an older model too and would love to hear what you did and get whatever feedback you can provide.....

My first boat was a 29 Dyer Trunk cabin. I fished her hard, brought it north tuna fishing. I would say for its size it is a very good sea boat. Fished quite a bit of bad weather with that boat. I don't recall any following sea issues at all, but like any boat you need to get a a feel for the sea and anticipate what the boat is going to do, not wait for it to start happening. I always felt the 31 JC got a bad rap for this very problem. If you are already into the skate, you waited to long to correct.

First trip on my Dyer we won the local shark tournament, first prize was exactly what I paid for the boat. Pretty good following sea that day. 50% of the boats that entered turned around in the inlet that morning. 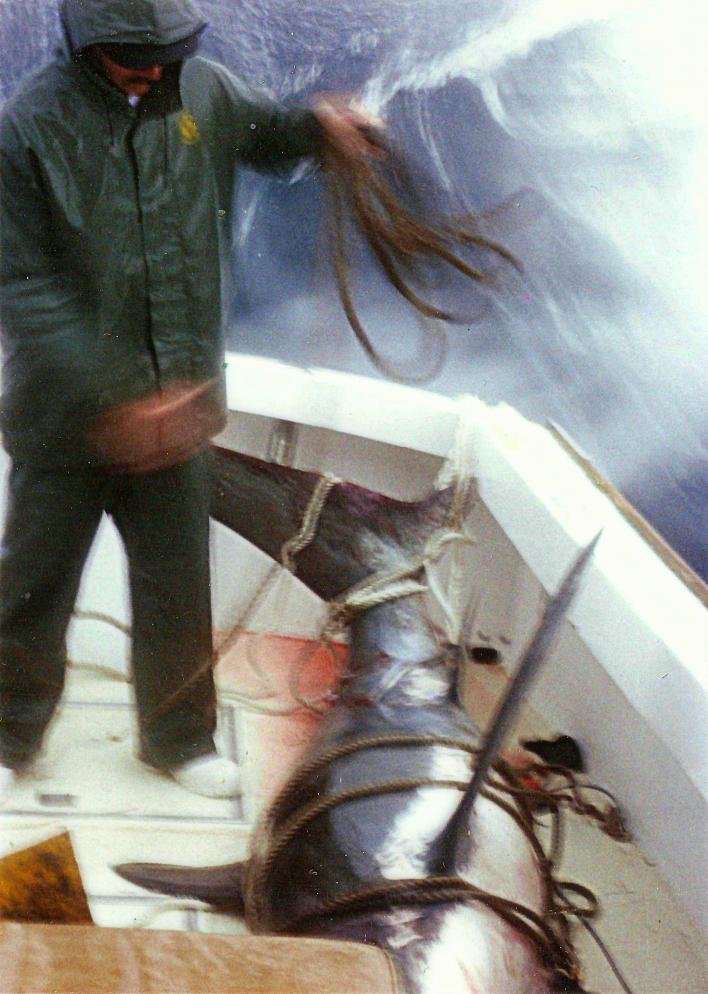