I was a fly on the wall during Bill's '76 midland rebuild last year and it motivated me to give it a shot myself. I picked up this '87 Seaway a few months ago. My initial plan was to restore the exterior (the blue/red paint combo of Eastporters great rebuild) and keep the interior intact for the season (even w/ tiller and 5 gal above deck tank). The deck felt solid and it wasn't until I reached around the stern hatch and started pulling out 2ft sections of stringer wood that I decided to do the deck as well.

I've spent the past few weekends pulling up the deck and stringers. As a complete novice when it comes to boat construction, I knew it would be crucial to keep the stringers intact as a template but the rot was severe. I tried to pull the entire grid out as one piece but the wood just crumbled. I'm at the point now where I need to trim the flange so it's the same length throughout and then I would like to start installing the stringers. I've been following Tunascapes' and RKrough's builds and they're been extremely helpful. I have a few questions at this point and welcome any and all suggestions.

As I was cutting up the deck I got a little too impatient with the circular saw and ended up putting a good 5 inch slice into the hull (under waterline). Any suggestions on the best way to patch this?

From the pictures you will see that I left as much of the bow hatch as I could but I ended up removing the deck inside the hatch (from looking at tunascapes deck, I think that was a mistake). Should I just remove that entire hatch and glass it back on once the new deck is down?

How do I even begin with the stringers? Wood to use? Resin? Measuring? Leveling? I have some measurements from the ones I took out but they were far from exact due to the rotted wood.

I've really enjoyed reading about the progress of everyone's builds and look forward to more in 2012. Happy Holidays. 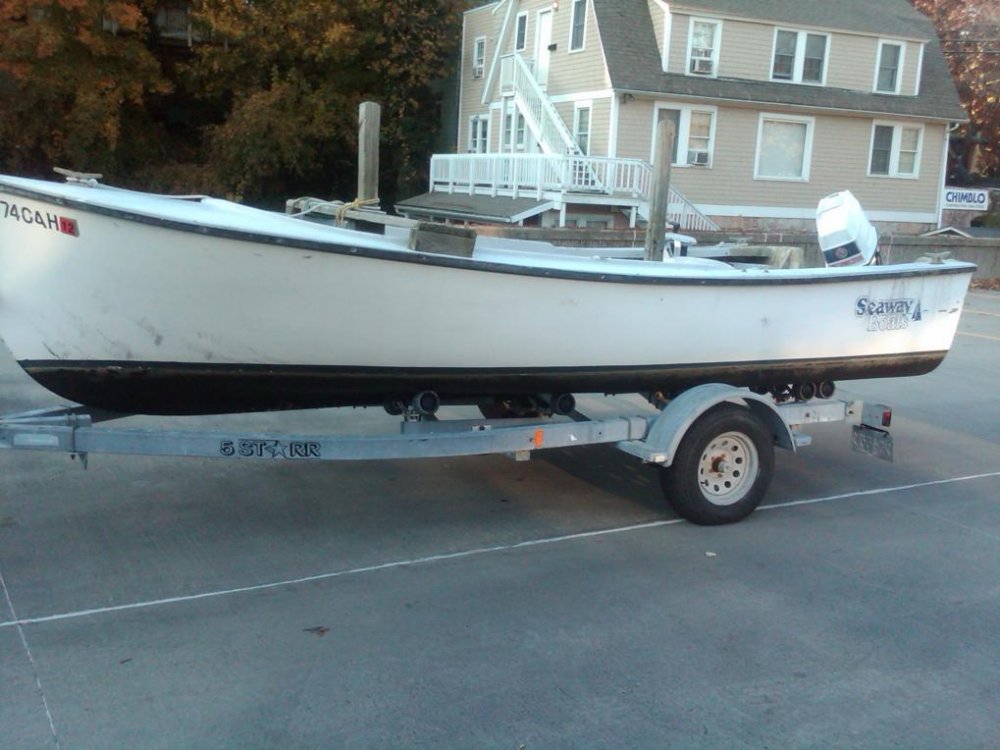 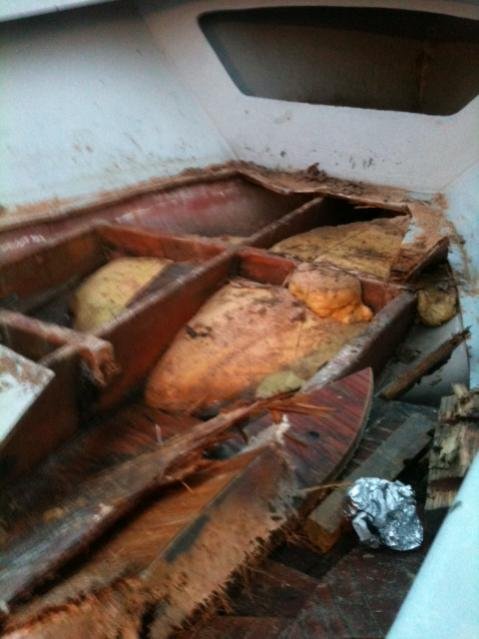 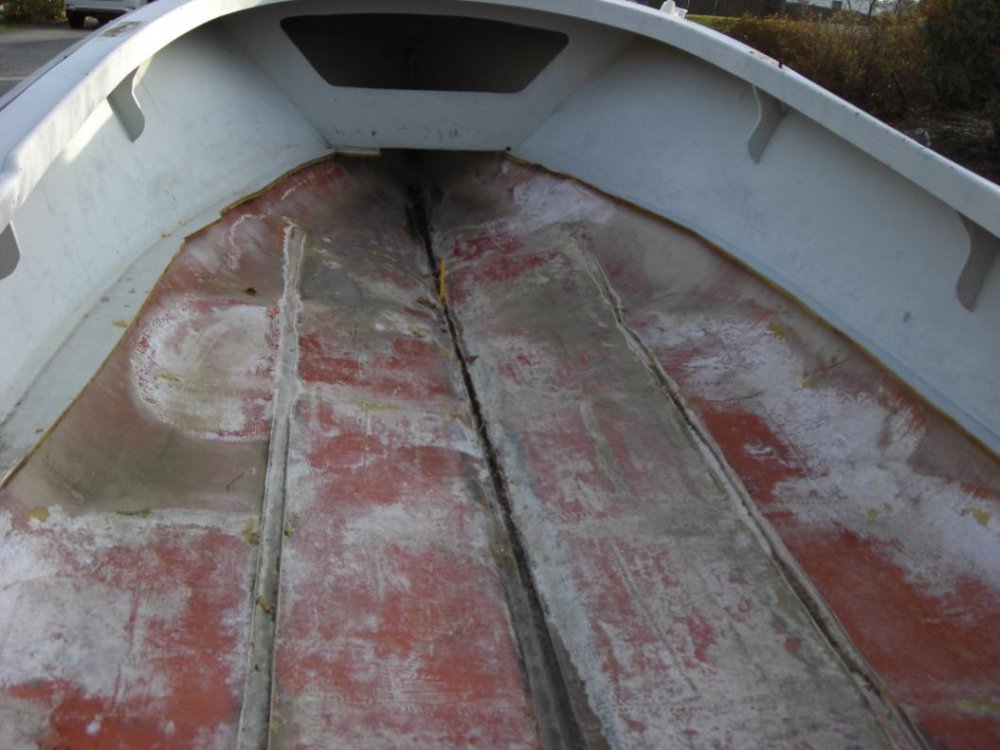 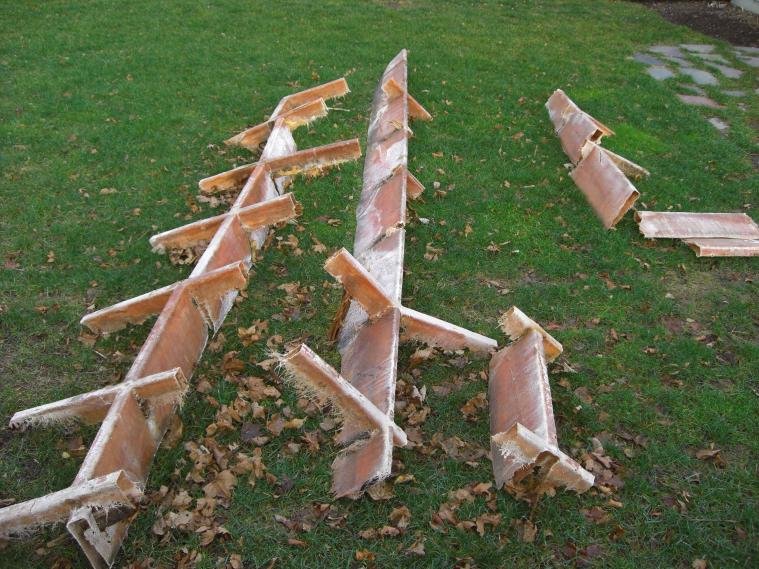 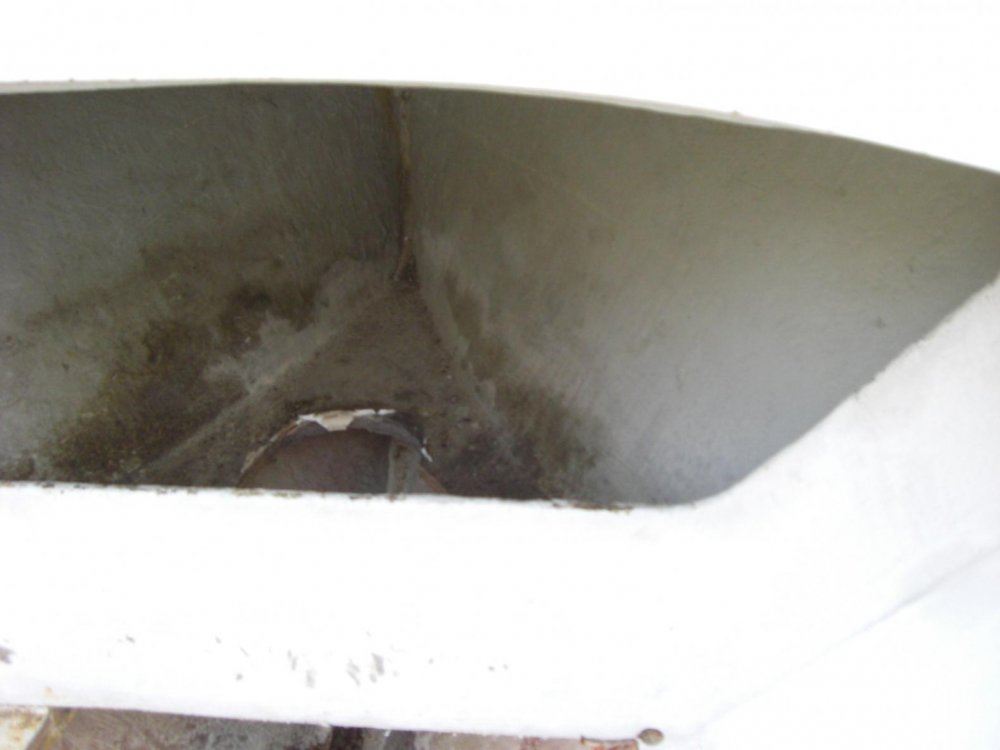 Oh the joys of rotten wood. Good start so far. I guess I am not following your concerns on the bow hatch but you have yours cut back to the same point I do. I had a built in step in the front for extra seating and hatches for storage that might be what you are looking at. I left my bow hatch as is and most likely am not going to touch it, it seems to be decent. I did leave my center stringer coming back about 6 ft just as a point of reference for deck height. Now that the two outside stingers are done that will go and be replaced back to accommodate the new in deck gas tank.

I had talked with Bill about one of his friend that had bought a 19 seaway and had offered him one of my old stringers to copy. It is not in great shape but it was good enough for me to scribe my stringers to. I am assuming your are that friend so you are welcome to it. I am just over in Norwell, not sure if you are in Hingham as well.

Great boat to rebuild, and you have a nice clean "gut job" so far. I'd look at all the comments I've made re: stringers, transom, and sole and duplicate it. You can go with DRY pressure treated and not worry about rot again. Very cheap compared with composites- go with epoxy for a secure bond. One major concern is stringer height/sole height for proper placement of scuppers above natural waterline. Many of these small DE boats didn't put the scuppers above the waterline and water is always on the sole. If that is the case with your boat before you gutted it- I would recommend increasing the height of your stringers and going with 3/4" ply to avoid needing lateral sole supports as your original had.
Was your original sole 1/2" or 3/4"?
Last edited: Dec 23, 2011
E

Regarding the 5" cut in the hull- I would sand inside hull, add 3 layers of 1708 wet on wet (patch job). On the outside of the hull fill with thickened epoxy after it is hardened. Fair, prime, paint- done.
F

Tuna, I am in Hingham as well. I'd appreciate the stringer mold. I have some time off coming up and I'm excited to put the tools away and start building her back up.
F

Eastporter, Thanks for the reply. The original was 3/4". I only got a chance to take the boat out a couple of times but the sole stayed dry. I noticed on your rebuild as well as Tunascapes, that you used the flange as support for the new sole. I'm going to do the same thing so is that why you're saying I won't need the lateral stringers. Also with the additional 1" height I think I will automatically have to raise the scuppers. I'll attach a picture in a separate post. I went back through your thread and appreciate the listing of materials used. Thats a huge help.
F

Here are pictures of the transom and scuppers. The person that rebuilt the transom wen't heavy on the resin so I'm going to start fairing that down after I remove the engine today. I'm not exactly sure how to rebuild the engine well?(the area where the sole dips down below the scuppers) but I'll cross that bridge once the stringers are installed. 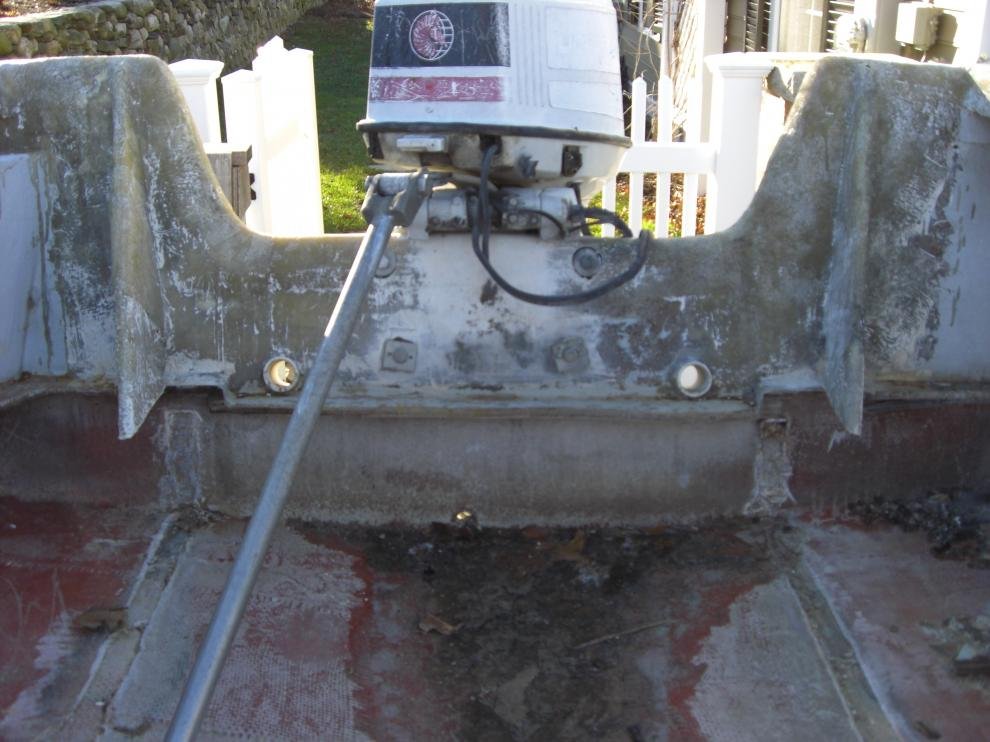 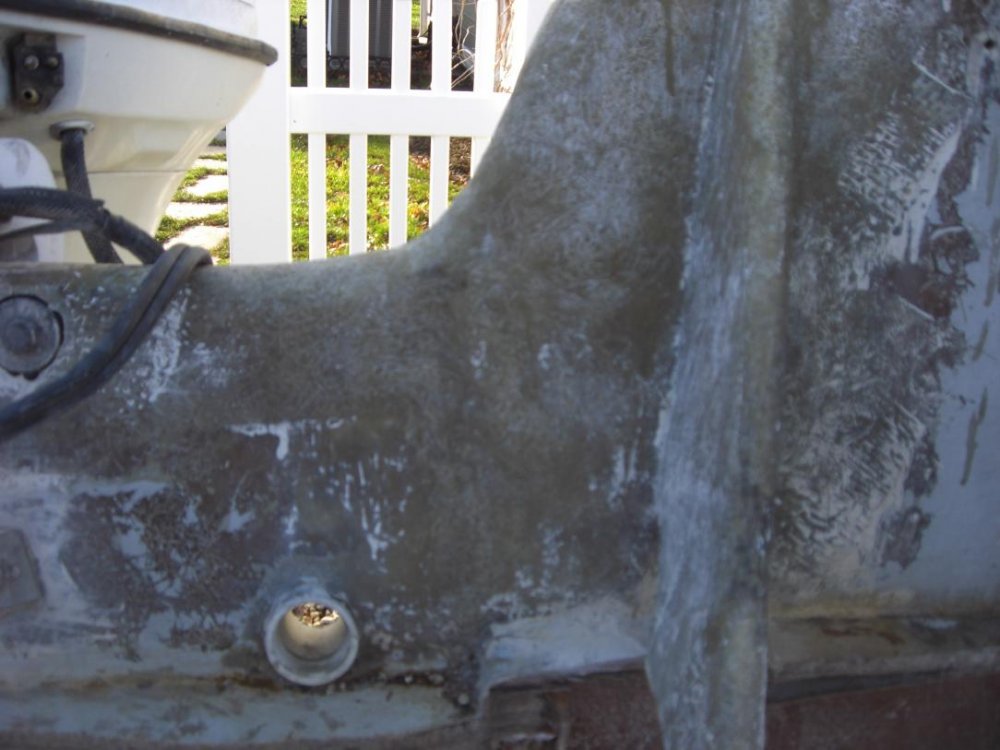 You are welcome to that stringer whenever you need. Just send me a pm when your ready and we can get it setup. As far as that scupper well area, yours is more similar to my dads 26 than my 19. The 26 has that drop down across the entire transom where yours is only in between those gussets. Just my opinion but it looks like those pieces of PVC are raised off the actual sole which would leave residual water anyways. I would raise the deck height by setting on top of the existing flange, like you mentioned, and then fill that small gap under your scuppers with whatever you need to get it flush. Maybe 1/4" plywood and then some glass. This would eliminate the residual water and make the height change a little less severe with the new deck height. If your boat doesn't flood with the current scupper height there is no reason to get into patching the transom.

My one piece of advice is make sure you glass the transition from the deck to the scuppers very well. This is a place that always ends up leaking and rotting the deck on that type of setup. I still don't think we got that perfect on the 26 but I have no way of knowing for sure. When you come for the stringer I can show you 26 if it would help, it's right around the corner from my house.
E

Hey guys,
All good advice to use the flange of the old sole to support the sides of the new sole and raise it up a bit. The old scuppers will be fine to use again, and you can add the little drop down by going with a thinner piece of ply in that area as Tunascapes said (it looks like you only need 3' or so by 6" ). You will be fiberglassing over it with 1708 so it will be strong. You will probably have to measure and cut 3/4" or so from the bottom of the two knees that are currently fiberglassed to the transom. I wonder if those were added to give support to a heavy motor as this is not the normal set up from the factory. If it was mine I might even remove them- although you never know how the current transom was tied into the hull. It is hard to tell from the photo- does the plywood core in the transom go all the way into the bilge? It looks like it it stops where the old sole was, but maybe it is all of the new fiberglass and resin on the top of the transom that it making it difficult to see.
Last edited: Dec 26, 2011