First of all I will post pictures as soon as I can take some current ones hopefully over the weekend. The boat is in very good condition and currently in water fishing. It is not the biggest one or the fastest one on the market but has been completely redone. If interested please contact me at [email protected] and please, once again please don't send me an email if you are just curious about the price. I appreciate your time and have a good evening.

Description:
31â€™ Eastern Casco Bay without flying bridge. This safe economical vessel that has been used for both pleasure and charter fishing and owned by the present owner since 2001. The vessel has been completely redone in the past two years with new wiring, AC/DC panel, bilge and macerator pumps, marine toilet, tanks including fuel water and waste, bow thruster, inverter, three D8 batteries and other misc items. The decks and aluminum fuel tanks were replaced during the winter of 2012. The decks are supported by new Douglas fir stringers and the decking is Coosa Board making them solid and will never rot. While the decks were out all bilges received a fresh coat of gelcoat. Items also replaced new include exhaust, trim tabs, steering lines, Kobelt Controls, Wynne Windows, two Bomar aluminum hatches, forward Bomar lexan escape hatch and four Port Lights. The engine had a top end overhaul and the reduction gear rebuilt during the winter of 2011. The vessel would make an excellent charter, tuna or pleasure vessel for someone looking to get into a diesel boat which has been completely gone through.

Hey Dave, good luck with your sale! a new CB in the future?

A Few Pictures From Today

Here are a few pictures of the boat from today

And a Few More

Dave, when did the new tanks go in?
C

One of the tanks went in during 2011 after a small leak and the other when we did the decks in the winter of 2012. The tanks were fabricated from aluminum by New England Propeller who has been fabricting tanks for a number of years. Once completed the bilges were ground down and new wedges were glassed in which they sit on top of. They do not sit directly on the wedges but on double thick hard neopreme rubber with both sides smeared by 5200. all of the supports they sit on have limber holes drilled to allow the flow of any water in there from sweating or what ever to run to the lazerette with a bilge pump. Each tank has a ventilation box built above it so with proper ventilation they will remain sturdy for many years. Bob of South Shore Boat Works helped me with the tank work and putting in the new decks. He does an awsome job and has done many projects on this boat over the years.
Last edited: Oct 21, 2013
L

Dave, did I miss the asking price? Thank you
S

Dave. Sorry to see that Relentless is up for sale . With all the upgrades, Someone will be getting a very nice boat that will need minimal maintenance for 10-15 years. Good luck Bob
T

Can we gwt some fuel burn numbers? Thanks, Dave.

Well without a flow scan it is tough to determine however we can run a twelve hour charter with four hours of steaming at 2150 RPM and cruising at 14 knots with eight people and full fuel on board. A few two to three mile moves and moving back up on the drift. By the end of the day we usually burn between 55 and 60 gallons averaging about 5 gallons and hour for the day. My best estimate is we are burning about 8 GPH at 215o and 14 knots. Once again Best Estimate
W

First of all I will post pictures as soon as I can take some current ones hopefully over the weekend. The boat is in very good condition and currently in water fishing. It is not the biggest one or the fastest one on the market but has been completely redone. If interested please contact me at [email protected] and please, once again please don't send me an email if you are just curious about the price. I appreciate your time and have a good evening.

I'm with worldcat, Cap'n Dave ought to throw out a idea of what he's looking for so as to save both his own time...and a prospective buyer's as well. It's not like there's a blue book for downeast boats (or is there?!)...

It only takes a few minutes for someone to send an email and I have replied to a few who have sent me one requesting the particulars and price. However to satisfy those folks who don't have the time due to being up too late watching the Sox win the AL Penent, out tuna fishing, getting thier Halloween costume together or any other reason I have decided to post the asking price. The asking price is $74,900 and of course like anything else in life including marriage is negotiable. If anyone has any particular questions, please feel free to email me anytime at [email protected]

I'll Miss fishing aboard Relentless. 2008 was the first time I joined a shared charter and have great memories of these last 5 years.

Whomever gets the chance to aquire this vessel will be happy. There is not a thing it needs. The Refreshing it has had makes it feel like new.

Not being an owner of a boat myself I may be out of place saying it but my feeling is Relentless will Survey for 20% over what the asking price is. 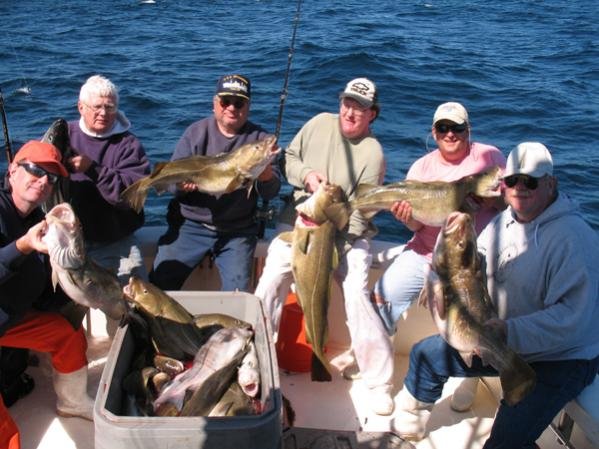 Boat looks and shows great. You will find your buyer.