Hey I am going to put this on next weeks boat list but thought someone might be interested before this thing sells fast..Its a 2006 ROS center console.its actually in VA.. it has a motor ( which has 360 hours)on it but the owner is now living in alabama and is going to take it off and put it on another boat that would fir in better down there..I spoke with him last night and I guess there is a lot of interest and some guy from Louisanna is looking tocome up and buy it..Looks like a very good deal for that hull.. he says the 225 is way over powered so I figured one of those 150-175 e-tecs on ebaymotors would work just fine...so you figure about $7k for the motor and you got a pretty nice boat for $13000

If you go to the ROS website these sell for starting at 68k with an outboard
http://www.fontaineyachts.com/ROSBoats/24s.html

also if you dont like the drive you can have the boat shipped via uship.com.. basically you just post an ad for the shipment you are looking for and trucking companies ( or 1 man gigs) bid on your job..I know a few people who have done it will some good luck.. 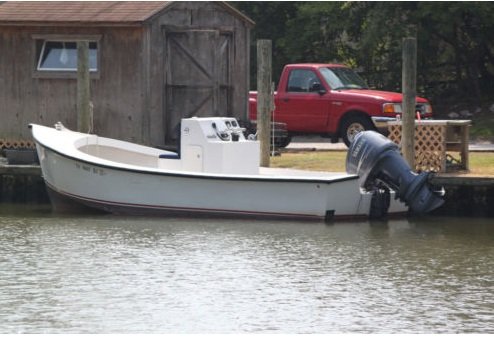 Jesus... When I only wish I jumped on a ship to get some cash this year!

My ebay buyer couldn't get a loan and backed out on the deal. It's back for sale on Craigslist, with or without an engine:ROS 24' Commercial Center Console
P

Well it was 3 years ago so I hope he sold it by now!

I didn't even notice that!
C

Hey guys. Fist post here. I have been vacillating between a number of center consoles in the 20 to 23 foot range. Most of this time has been dreaming of Regulators, Makos, Contenders and the like. Lately though, I have been looking at the down east style boats, Roth built, G-20, ect.

I am aware of the general benefits and draw backs of the down east hull form as opposed to the afore mentioned deep and semi deep V hulls, but I do love the styling of the down easters, and am attracted to the economy and sea keeping of these hulls.

Almost all of my fishing is light tackle, spin casting surface pugs and fly rod, often close to the rocks and other structure. My season typically consists of fishing Gardiners Bay/LI Sound and points slightly west during the spring and summer months, and later moving to Montauk for the fall run of Albies and Stripers.

So. Long story short. I was wondering if someone could give me the Readers Digest version on the differences between the Eastern 22 the Seaway 21. I am interested in difference in hull form, fit and finish, and thoughts on which boat might be a better fit for me.

Thanks in advance,
Chris

Chris, Eastern and Seaway are the same company I believe. I am not knowledgeable on the differences between the hulls but I bet they could tell you!

edit: My impression is that Eastern is their more up-market brand but I could easily have that backwards.

I always thought that Seaway was the upgrade brand due to use of teak and the whole picnic boat theme. I don't know now that Eastern owns and manufactures both of them, as the price on the Eastern boats seem more expensive than Seaway (at least for the 24').
You must log in or register to reply here.
Share:
Facebook Twitter Reddit Pinterest Tumblr WhatsApp Email Share Link