[FONT=Verdana, Arial, Helvetica, sans-serif]A handsome and versatile Down-east style powerboat designed and built by New England Craftsmen. Jamie Lowell, a 6TH generation designer of Maine Lobster boats, designed the Gurnet Point 25.[/FONT]
[FONT=Verdana, Arial, Helvetica, sans-serif]Above the waterline, the Gurnet Point has a moderate flare forward, slight tumblehome aft and the beauty of an uninterrupted sheer of a traditional Maine lobster boat. Below the water, the Gurnet Point 25 has a semi-built down-east style hull that is stable, fast and efficient.

The bilge and chine are very tight, which minimizes rolling, creating remarkable stability. The bow has a sharp deep forefoot, which decreases resistance to water flows and eliminates porpoising. The long full keel, with faired deadwood around the stern bearing, provide a long straight run, protects the running gear and minimizes resistance, allowing for a fast and efficient hull. Toward the stern, the hull flattens out to a long run with moderate dead rise.

[/FONT][FONT=Verdana, Arial, Helvetica, sans-serif]The Gurnet Point 25, with its hull design has the proper length to width ratio of 3 to 1. With today's high cost of engines and fuel, its efficient hull moves easily and economically through the water with a low to moderate horsepower engine. A modern lightweight diesel inboard engine of 170-230 hp will push the Gurnet Point 25 at speeds of 20-25 knots, while using a minimal amount of fuel. An outboard powered version of the Gurnet Point 25 is also available with a maximum of 200 hp.
[/FONT][FONT=Verdana, Arial, Helvetica, sans-serif]
The Gurnet Point 25, with its wide 8-Â½ foot beam is legally trailerable without special permits or restrictions. This is especially desirable because of the high cost and limited availability of dock space. 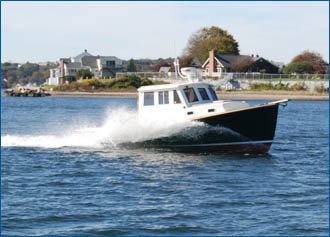 Nice to see the Lowell boat building tradition has a new generation to keep it alive. Jamie and his cousin or brother own Even Keel boat works. I saw the Gurnet on their site.

I am not sure why this pretty little boat and their 38 footer do not have a greater following. They look like fine boats to me. It seems NBay is now the 38 ft leader. Any thoughts why?

Looks like they've only launched one 38' so far, as it's a relatively new design. Tough market to be introducing a new model in, but the line drawing looks really nice. The sheer is reminiscent of the Holland 38', a boat I've always admired for her lines. I like how she's not crazy wide either, only a touch over 13' on a hull that's almost 39' long. According to the article in Soundings that was posted on their website hull #1 had the R6-800 MAN in it, that's a ton of power for a 38'...wonder how she performs with all those horses? From the photos I've seen it looks like the 43' runs bow-proud when she's put in the corner (similar to a Wesmac), I wonder if the 38' has the same attitude.
G

"I am not sure why this pretty little boat and their 38 footer do not have a greater following. They look like fine boats to me. It seems NBay is now the 38 ft leader. Any thoughts why?"

New designs come along to improve on the old designs. The new materials and power plants stood the test of some time which allows bigger better faster. Not even sure if there is a Even Keel Boatworks 38 made yet? It says there is one under construction. Is that the mold or a boat? Not sure why they would pick demensions they did. Looks like they are using wood rule of tumb for a glass boat. Its pretty obvious that glass should have 10 to 15% more beam than the old wood designs. It allows for alot more boat for your money.

The NB38 is a good something for everyone boat. It looks great. It pushes well for effecincy and can be adapted to any need easily. What else could there be to make a popular boat?

when was the last mdi 45 new construction
G Even Arno Day was building em over 3 to 1 . That man had a great reputation.

Gulf.. those Arno days were never built in glass were they? is that one glass or wood?
H

If you want a boat you can load a million traps onto, or load all the crap you'd cram into a similar sized Cabo, go ahead and put a 15' beam on a 40' boat. But, if you want to retain more of the traditional seakeeping abilities of a downeast design, make it closer to 3-1.

The Duffy 35' is just about on the 3-1 pin, and that continues to be one of the most popular designs on the water.
G

Bill said:
Gulf.. those Arno days were never built in glass were they? is that one glass or wood?
Click to expand...


No Bill, Arno Day never built a glass boat. He was inovative in understanding the need and how to build exceptional boats that exceeded the 3 to 1 rule. There were others who produced great boats that added beam over the traditional rule too. Clifford Alley made some. Boy I wish a had a need for a 29 x 10 Arno Day boat.
G

HarborRd said:
If you want a boat you can load a million traps onto, or load all the crap you'd cram into a similar sized Cabo, go ahead and put a 15' beam on a 40' boat. But, if you want to retain more of the traditional seakeeping abilities of a downeast design, make it closer to 3-1.

The Duffy 35' is just about on the 3-1 pin, and that continues to be one of the most popular designs on the water.
Click to expand...

Yes you are right. A 35 Duffy is only slightly over the 3 to 1 and is still being made. The Arno Day boat is also over 3 to 1 in wood which was almost unheard of in that day and age. I don't think anyone anywhere can have a legitimate remark about Arno Day not being amoung the highest level of craftsmenship and classic Downeast a reputation can have.

You think 10k is a good deal for that boat?
G

Bill said:
You think 10k is a good deal for that boat?
Click to expand...


Bill. if that boat is solid. That is a steal. Wood is a whole different aspect of boat owning. It isn't for everyone.

Bill said:
I called on it the guy said he sold it over a year ago haha
Click to expand...


The power of the internet... and people who don't date or edit a sold into the subject when it happens
S

I was looking through the thread for Gurnet Point 25. This is a boat that we build at South Shore Boatworks. Thanks to all that participated. We are currently building a 25. Despite the economy, there continues to be alot of interest in our boats. We don't have dealers and pride ourselves on being custom boatbuilders that incorporate the customers ideas to build the boat of their dreams. Anyone is welcome to stop by and see our current long term project. The restoration and conversion of a 45' Wooden lobster boat into a yacht. This boat when finished will be shipped to the Medeterrean and homeported in Croatia. Best to all. Bob Fuller

About time you registered and logged on here, I knew you would sooner or later. Bob has done some great wood working projects on my boat including ripping out the enire galley on the strboard side nd dulicating the seatee on the port to add additional seating. Fabricating a new wooden engine hatch that was all teak and holly on the sole and finally cutting out a deck on the port side to replace a leaky fuel tank when I was out of town on business. He took care of everything and the work is always top nothc to say the least. He will be helping me out with my deck replacement and youy must stop by and see his GP 25.