Thought I would start to share my fathers new build. John Brackett is laying up the hull & top, along with a few other pieces. John's been great to work with. Very quality builder, responsive & easy to communicate with, and has also been sending progress pictures daily. For power, we are thinking either the 250 or 300 Yamaha. The two engines weigh the same amount, so both are in consideration. Boat will carry 100 gallons of fuel, 50 gallon water tank and a 25 gallon waste tank. Here are a couple pictures of the work so far. Very appreciative for the full grind job on the hull. 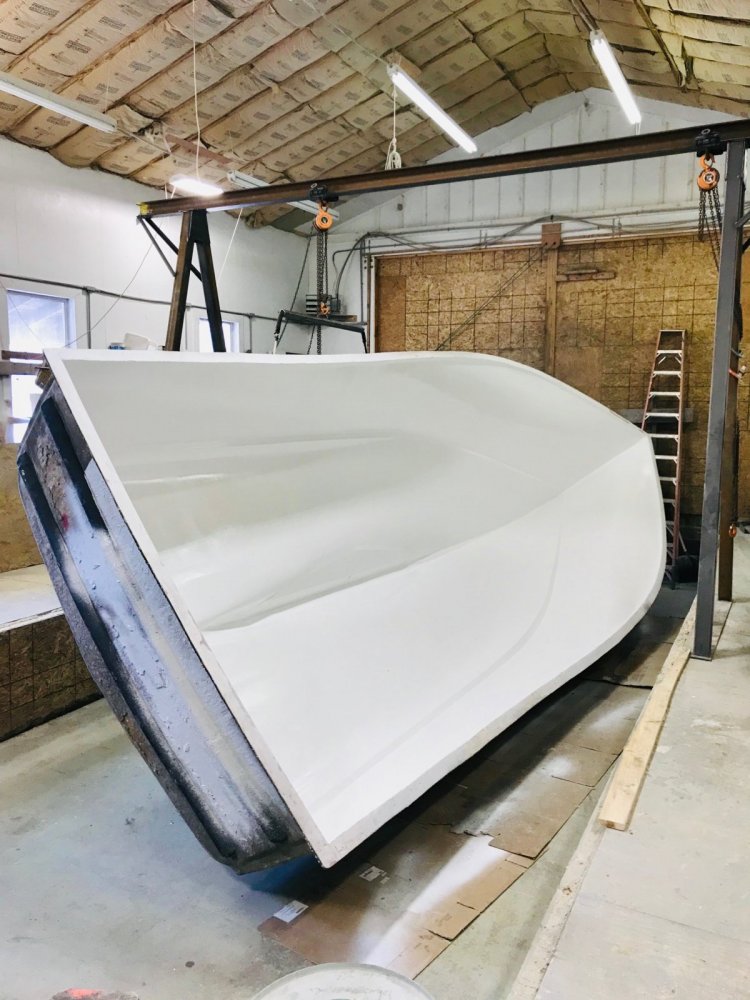 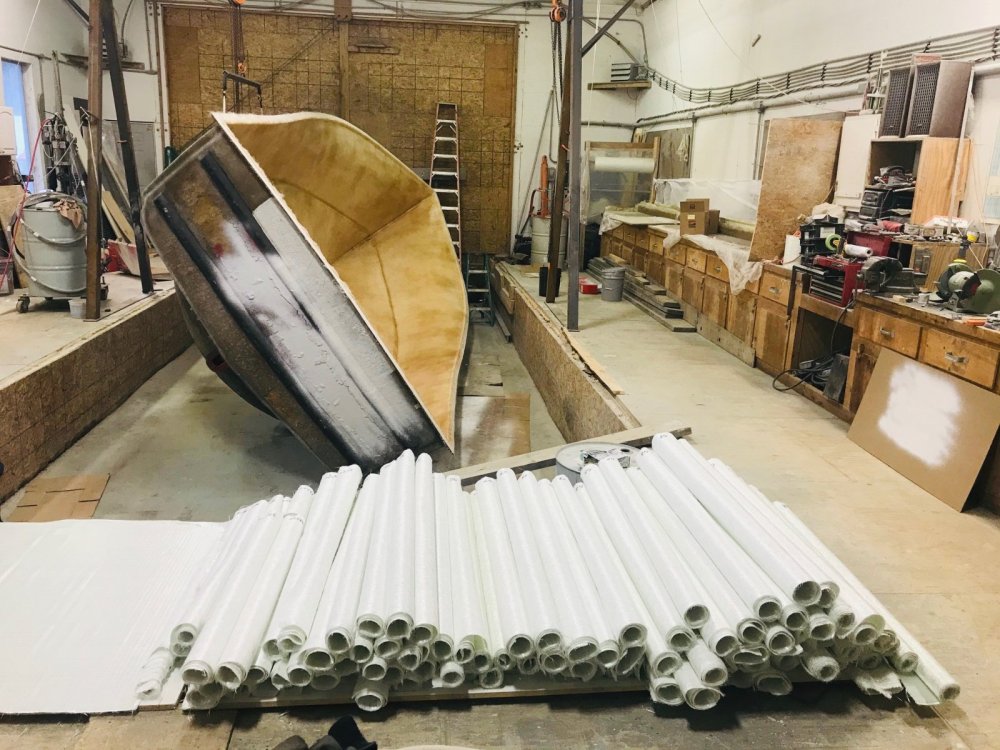 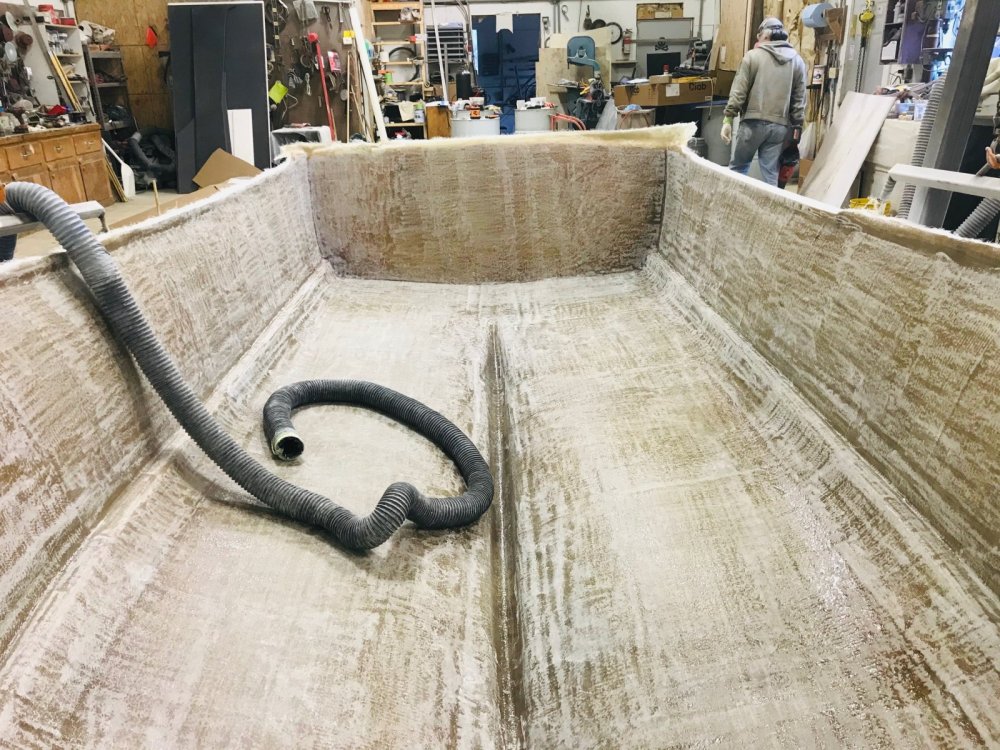 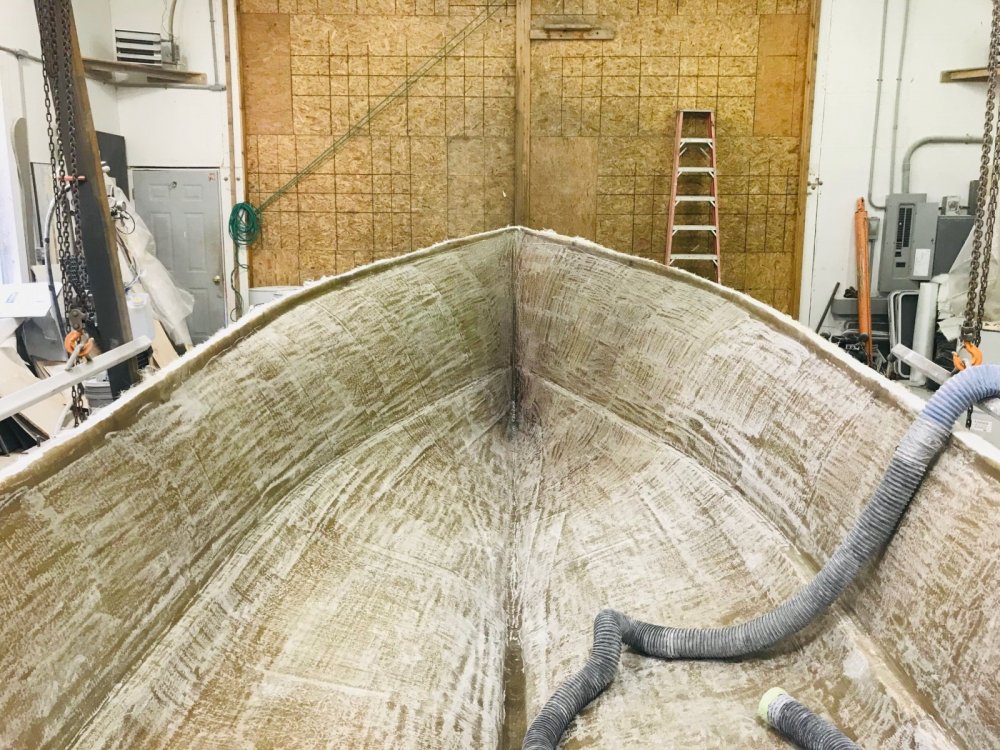 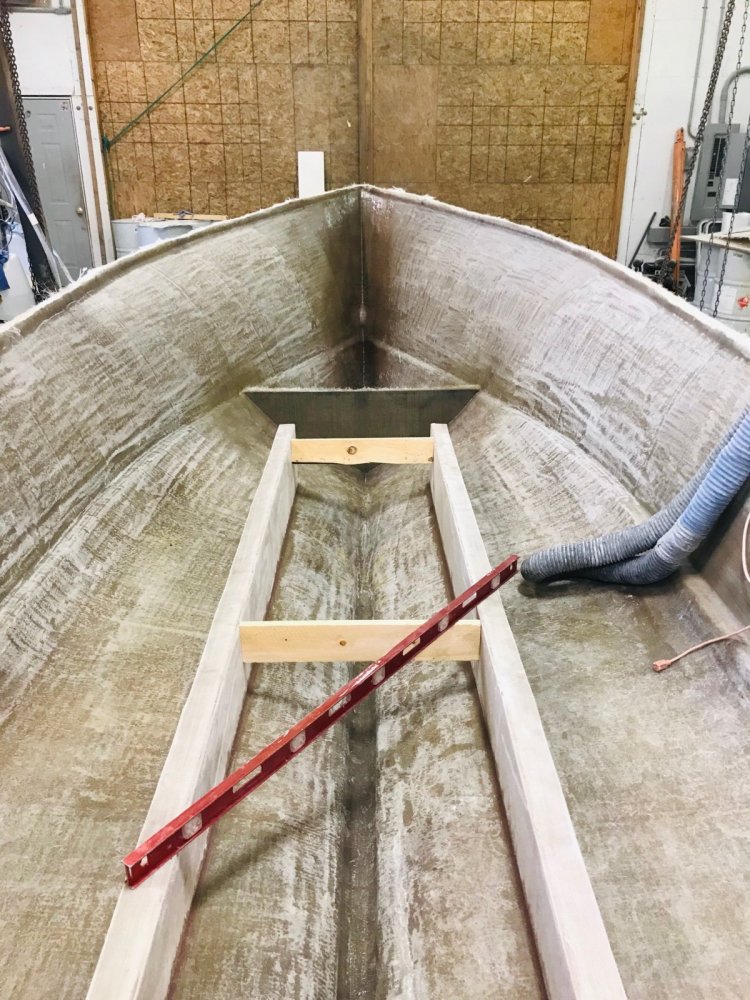 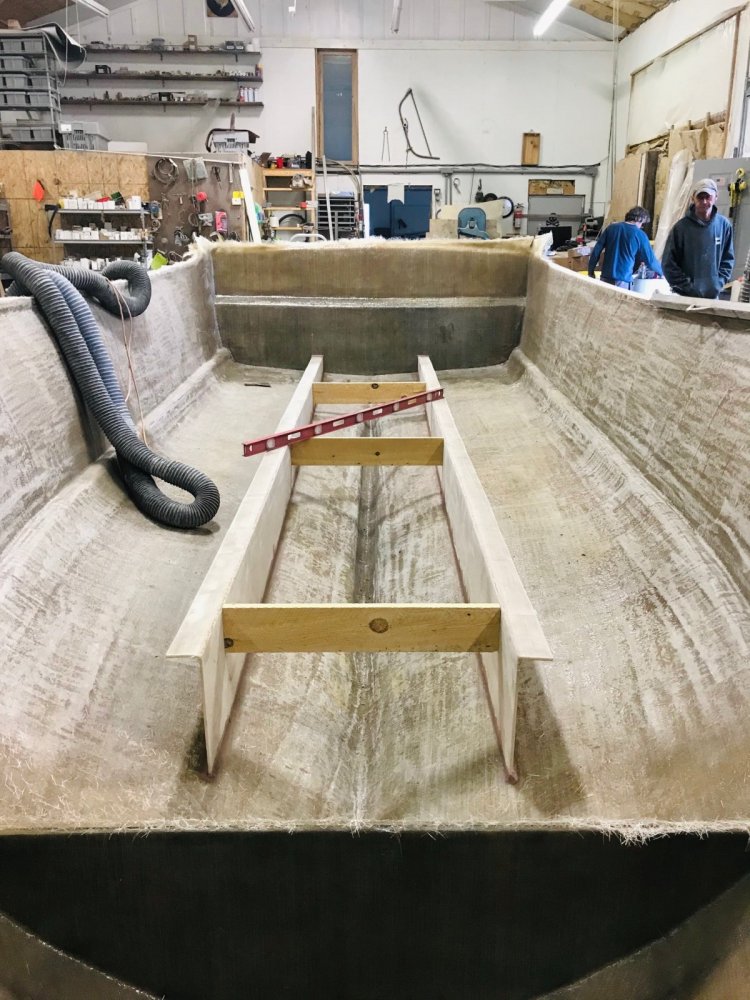 This is going to be nice!

Go 300hp! In my opinion but I have a hp addiction. I love those hulls

It will have an Armstrong bracket. They have the hull measurements on file.

jdickau484 said:
It will have an Armstrong bracket. They have the hull measurements on file.
Click to expand...

So how does that work?
Does Armstrong have a catalog of hulls they make the brackets to fit as orders come in?
If yes, what happens if they don't have a hull form on file?
Call them to find out I suppose.
My next project will be a DE center console and may need a bracket in the long term.

I am thinking a company like that just has a whole bunch of manufacturers on file. The builder has been in contact with Armstrong, and they have the hull measurements needed from the last builder. When I had my bracket made, by a guy that was essentially a one man show, my builder made up a template that showed the curve of the transom beam to beam and then also measured the angle of the transom. Those were the two big measurements, along with motor shaft length and overall width. We also discussed the shape of the bottom at the transom, and he added a little curve to the bottom of the bracket, to more accurately reflect the shape of the bottom. Its been a while but I believe Armstrong has a form on their website.
Last edited: Mar 24, 2020

jdickau484 said:
I am thinking a company like that just has a whole bunch of manufacturers on file. The builder has been in contact with Armstrong, and they have the hull measurements needed from the last builder. When I had my bracket made, by a guy that was essentially a one man show, my builder made up a template that showed the curve of the transom beam to beam and then also measured the angle of the transom. Those were the two big measurements, along with motor shaft length and overall width. We also discussed the shape of the bottom at the transom, and he added a little curve to the bottom of the bracket, to more accurately reflect the shape of the bottom. Its been a while but I believe Armstrong has a form on their website.
Click to expand...

I'll have to check it out with all the time I have on my hands right now.
20 Mitchell Cove is my target hull. I would think they had done one before but maybe not.
Having one I can get premade would be hugely helpful as I want to do this one myself. A lot scary. I am.a good electrician but not so much on the FG. Haha.
Enough of the highjack.
Love the Webcos. The 29 was the first DE I ever was on. Boat was re asy on the eyes and the body.

I do remember a white 20' MC with an armstrong on it.
B

There is one in Gloucester

I love this boat and outboard combo and cant wait to see it finished out. Going to open a lot of peoples eyes to outboard power and love the bracket so you get a full Transom and swim platform all in one.

I wonder about the power though- fuel cap seems a little short (not too much maybe 25 gals more would be nice depending on how you use it) to me which makes me think the smaller engine might be better but then maybe the fuel consumption would be better on the bigger engine at lower rpm/cruise. In reality it still is a DE so will run fast when its flat but too flat aft to really go more than maybe 25kts when its bumpy so how much power do you need? Short ride to the Oar for you so maybe a 15hp kicker motor is all....

Ben, I do think the 250 would push her along well enough. Considering the weight of the engines, just going to take a look at both. Its hard to imagine anything less than 250, as I have 150 HP on my boat and this boat will be substantially bigger/heavier. I do find comfort not having to push my engine for an 18 knot cruise, and i think that is the ultimate goal, an easy 18-20 knot cruise. The only other 26' WC with outboards that i know of (splashed), has twin 115 Etecs, so unfortunately not much of a comparison out there. There is one in the works with a 250, so will be nice to hear specs on that. The 22' at John's would fit nicely in that slip or yours.

Some glass on the stringers today, and main bulkhead being laid up. 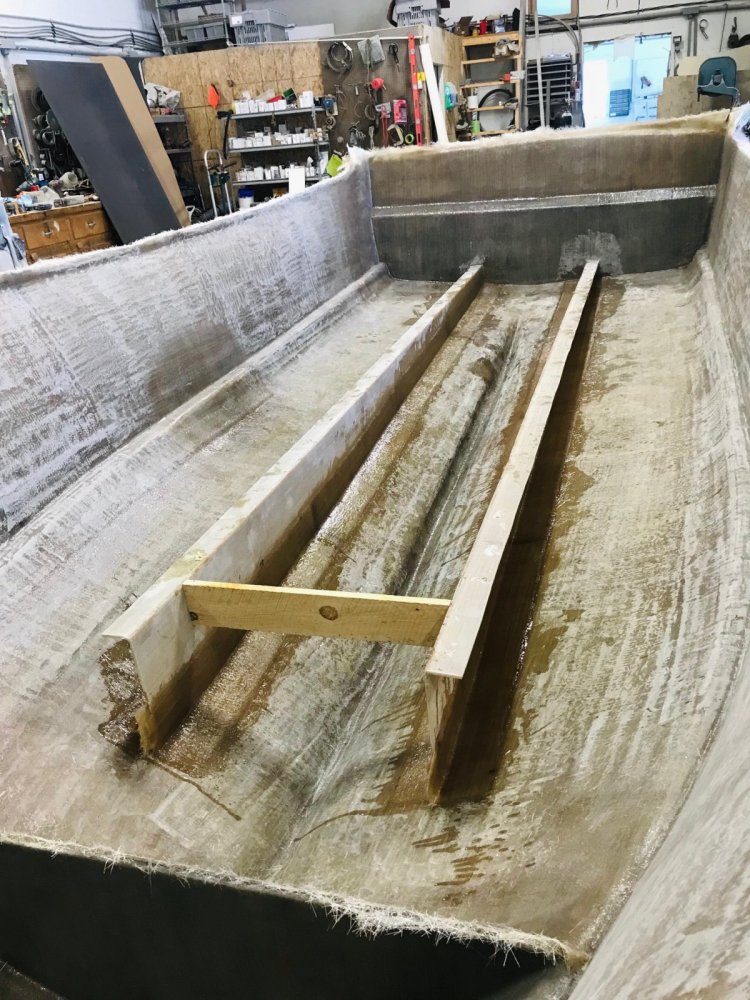 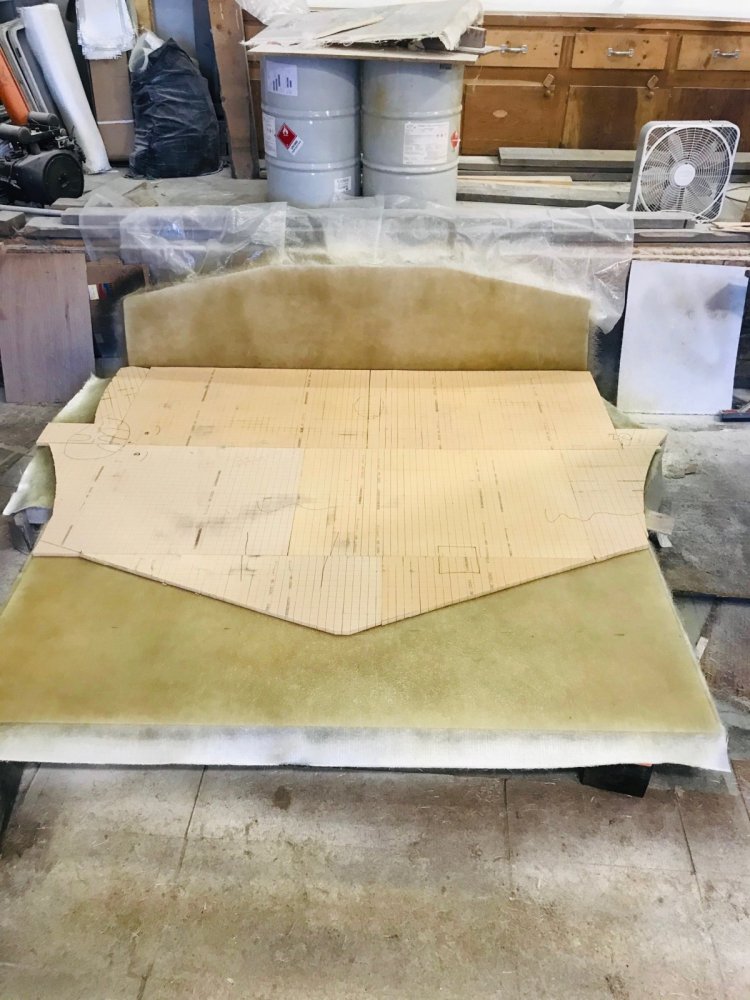 Great hull choice cant wait to follow this build, almost did an older 26 WC conversion to outboard . For those of you that have not been up close to one all I can say is this is a huge hull for a 26 foot boat. they tend to raise the deck height for the inboard version but with the outboard you could probably drop the deck height 6 inches an the scuppers would still be 6 inches above the water line and you would have approx.30 inch gunwale height.
I say go with a 300HP engine think about a 30 inch shaft gets everything up out of the water even at rest,
I run a 300HP on my 26 northern bay I think I could get away with 250hp but your boats is going to be bigger and probably heavier then mine so 300hp would be the way to go. and like you said you wont be running the engine hard to cruise in the 18 to 24 knts. range, fuel wise at 18 -22 knts. I burn 7 to 9.5 GPH so conservatively say 10 GPH running 20 knts with 75% rule = 7.5 running hours with @ 150 nautical mile range. if your planning long range trip 120 gallon tank would add a little more distance, I hold 100 gallons and even running 70 mile round trip runs my fuel is never below the half tank mark.

I had a Novi built in 2000. I used it for a variety of commercial fishing. When I purchased it I had a small cabin up front. Plenty of room pushed very easy. With then cabin on the bow I added 300lb of weight in the cabin. Depending what sea conditions you are using this boat remember you don't have a 1200lb hunk of iron in the front of the boat. Plus factory in the 800lb hunk of weight on the transom. Build her heavy on the nose. 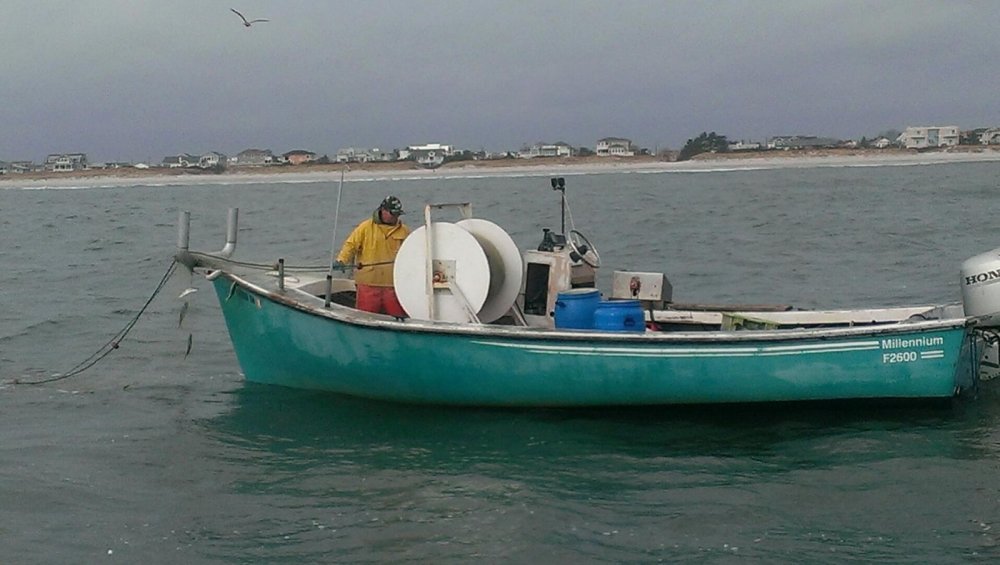 Great idea to go with an all composite build on this boat! Did the builder make those glass stringers or from a factory?

Thanks for those numbers South Shore. Nice reassurance and I like the idea of a 30 inch shaft. We have a Novi outboard as well, and I will say they are definitely a little more tender in a sea that requires keeping the entry down in the water, compared to a DE outboard. But i agree, we will have the fuel tank where an inboard would be mounted in this hull. I think its beneficial to build these boats heavy in general, nothing crazy but I don't believe it pays to keep them light like one might want to with an inboard config. Eastport, John laid these up. Interesting for sure.
Last edited: Mar 25, 2020

Would be great to see if you could find out how that other boat with twin 115’s runs on one. I bet it does reasonably well. Personally would go with the 300 if weight is the same. Cant wait to see it finished out.

Which 22 are you talking about?

He has the molds for the 22' WC as well. Which has the 8'6" beam I thought I remembered you saying was max for your slip.

Hull is out of the mold. 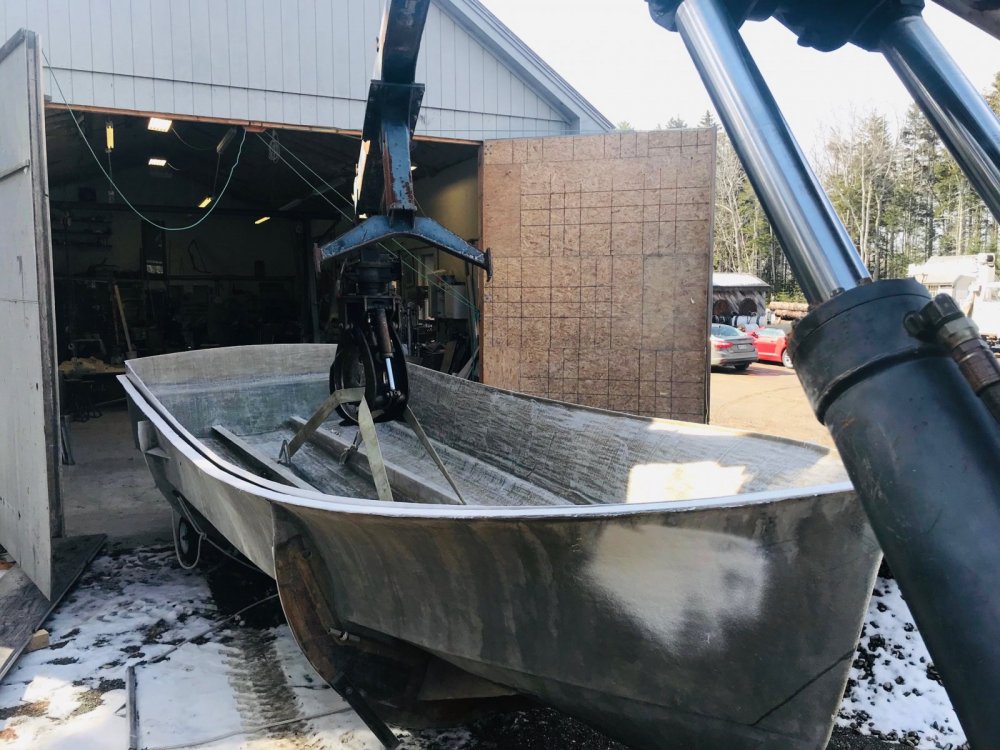 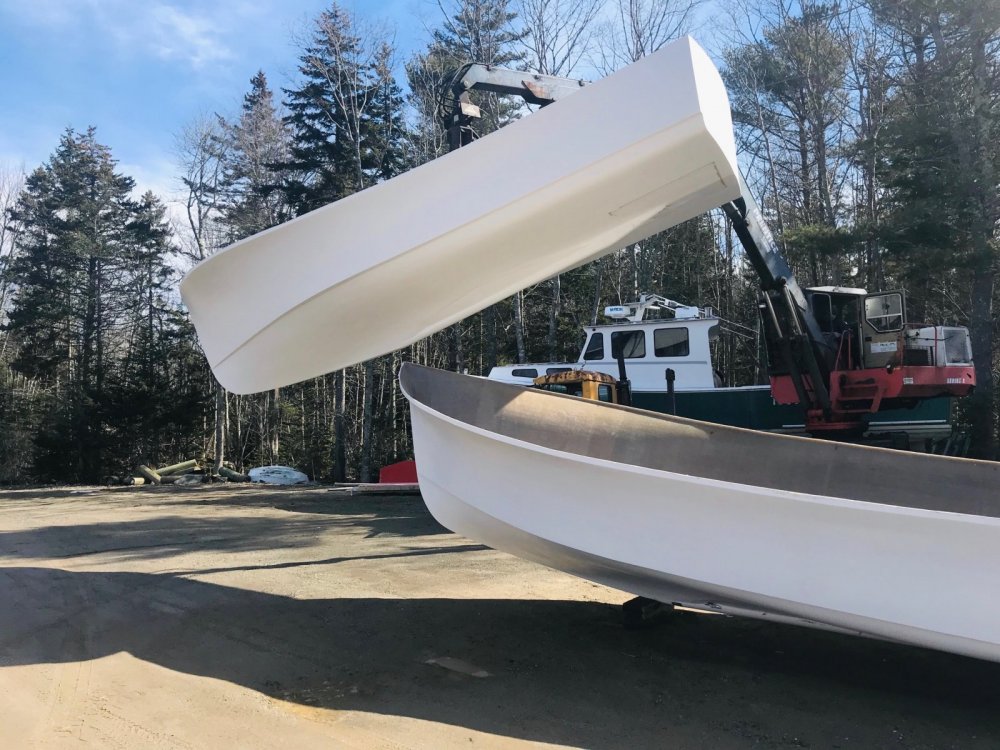 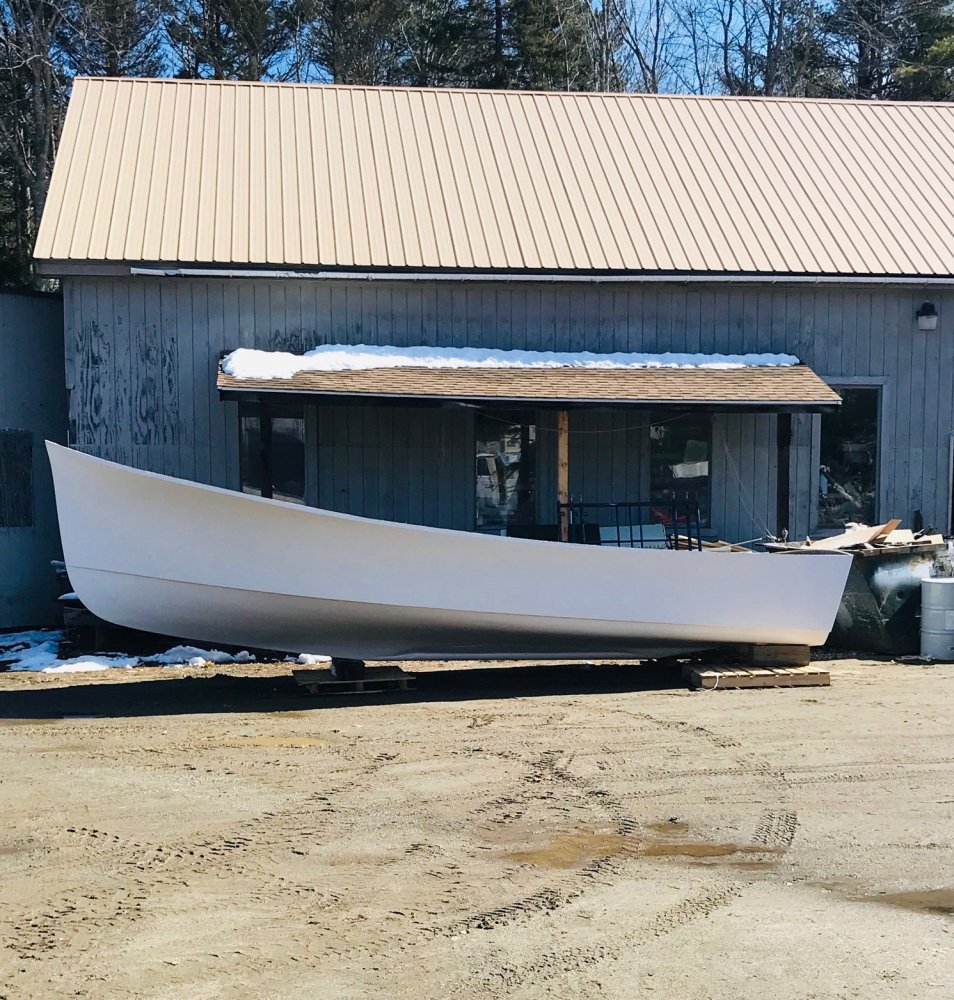 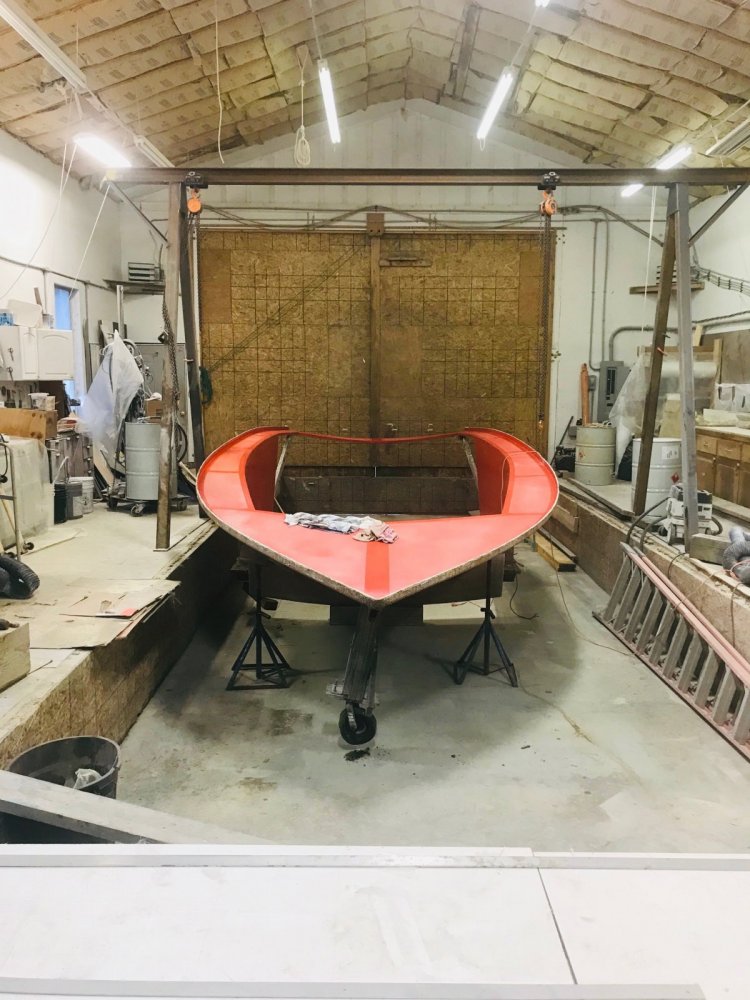 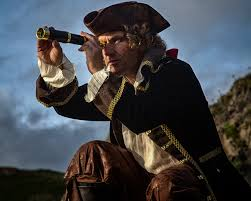