In the market for a 28 downeast. One of the boats Im looking at is a 28 AJ with a 260HP Yanmar. Boat is nice looking on the eye and finished well. I've done a lot of looking around on the internet but cant find all that much on opinions. What I have read is positive but I was looking to see if anybody has any first hand experience being on this type of downeast. I am new to the web site and have been enjoying all the information on the site.

My buddy has one with the 315 Yanmar and it is finished off nicely. He may be looking to sell if you want to look. I have fished on the boat several times and it rides well and very fuel efficient.

Alan Johnson 28. Years ago Alan was finishing off other peoples hulls and decided to do his own thing with his own boat and came up with the AJ28. 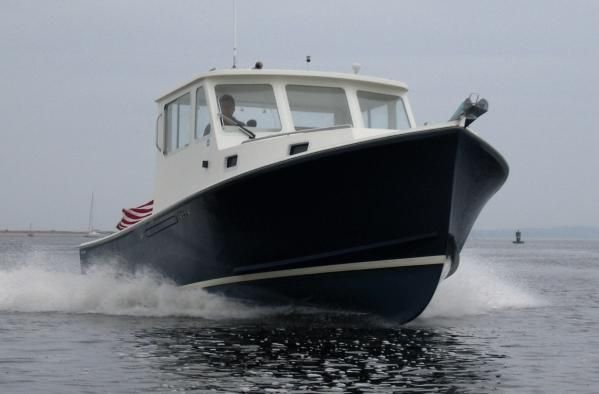 I looked at and researched them when I was looking to buy.Nice boat,excellent fit and finish.The boat is 100% composite;no wood at all.They are in the upper end of the $$$ range (new) for that size.Though I have never sea trialed,I heard they pounded a bit;hard to believe for a D/E boat.

Nice boat, there is one by me and the owner loves it. Seems very well built. If I remeber correctly it started out as a 26 duffy and he changed it a bunch by making it wider and longer. I considered building one a few years ago and Mr. Johnson was a very nice guy to talk to, he knew where all his boats were located and witch ones were for sale.

Thanks for the replies everybody. I came across Alan's number and will give him a call. I'm in the market for a 28- 32 Downeast. Just really started looking now even though most boats are wrapped up in my area (Long Island) I have a 28 BHM and a 31 BHM I will be checking out later in the week. Perfer a 28 ft being I fish a lot alone and figure it would be easier to run. I'm limited to a max size of 32 ft due to restrictions in my neighborhood boat basin. Looking for a boat finished with a small galley and separate head to keep the wife happy for a couple overnighters on Fire Island. My 1984 Mako 258 has been good to me but its time too move up and over to diesel.
E

Thanks for the info Eslang. I was Thinking that the 260 was not going to be enough power to get a 18-19 cruise. I can live with that, especially with the fuel burn. I 'm curious at what the difference the 315 will get. I'm going to give Alan a call when I have a few moments to speak later this week. I like the white hull better. Did you have any opinion on the ride of the AJ 28. Do you think the hull is too light or experienced any rough ride. What kind of cruise did you get on TIGERSPUD.
E

The ride was good for a 28' boat. I thought the boat ran great at 19-21 knots. It has a large keel for a 28' boat. Over 23 kts it climbed on the keel. Ive never run another 28' boat so I can't compare. My friend has a 26 general marine and you could put it inside my AJ. I think the 315 was the right amount of power for that boat. TIGERSPUD does over 30 kts on the pin. It really moves. I think the cruise is between 20-22 kts. I can tell you that my hull was blue. It looked great when it was all polished up in the spring. It loked lousy in July after the sun beat on it. My new boat is white. No matter how much it fades a coat of wax makes it shine. It's sooo much easier to take care of.
It rides fine for a 28' boat. It doesn't compare to my 36.
BTW I liked Alan so much I had him finish my NB. He does nice work and no wood. It's all composite material.

Eslang,
Did I see your NB in Block Island this summer at the boat Basin? If it was yours nice rig.
E

When?
It's white
Name is MEGHAN ANN
I was there with it a few weekends. Last time was Labor Day weekend.
I was there for the Tri State also but on my friends NB 36. Maroon hull
named Buddy B

It was yours, I noticed it because Alan had his mark on it and I didn't think he was finishing boats other than his own these days. He had finished off my WB28 and when I was looking to build new he turned me down on finishing a new hull, he said he wanted to focus on his 28's.
In any event nice rig and lots of luck with it, I am sure it will serve you well.

I had a friend who bought a AJ28 flybridge with gas power that keeled walked badly over 20knts. I mean bad, if a 20ft boat went by, you would fall of the edge of the earth and end up in a black hole facing who knows where. We had to cut the bottom three ft wide to take out the small V on the bottom of Duffy hull to flatten the bottom, plus trim tabs and that helped. Fit and finish was good except the window edges were not decored and was wet. One other thing I did not like was the fiberglass fuel tank was a tub that only had 2 layers of glass over the top. Scary as it was more flexable then a rubber bladder though it did not leak but with gas, if it did.
D


tunafishhkg said:
I had a friend who bought a AJ28 flybridge with gas power that keeled walked badly over 20knts. I mean bad, if a 20ft boat went by, you would fall of the edge of the earth and end up in a black hole facing who knows where. We had to cut the bottom three ft wide to take out the small V on the bottom of Duffy hull to flatten the bottom, plus trim tabs and that helped. Fit and finish was good except the window edges were not decored and was wet. One other thing I did not like was the fiberglass fuel tank was a tub that only had 2 layers of glass over the top. Scary as it was more flexable then a rubber bladder though it did not leak but with gas, if it did.
Click to expand...

Let's see if we can make some sense out of tunafishhkg's post above.

You mention the AJ 28 and Duffy in the same breath - which is it? AJ originally finished Duffy 26s but then designed their own hull, the AJ 28 - these are two different hulls (a fact that you seem to have missed).

Regards the evil handling tub that you cite, I'd just point to 50+ mph race boats that tore up the lobsterboat racing circuit in their day (better than ten years ago now). Ever hear of the Terminator? How about the Lunasea? I'm sure everyone here has seen the photo of the upended lobsterboat at the Searsport venue ten years ago now, right? Well, that boat that went airborne (and then sank) was Jim West's 'Wild Wild West' (Jim's own design). Anyone here remember the other boat in this two-boat match? The one that didn't go airborne and sink? Well, that was the Lunasea, an AJ.

Finally, like just about all Maine builders, AJ sells kit boats and I'm certain that if you put just a bit of research into it you'll find that you friend's mickey moused mess was rushed to launch by some shade tree 'finisher'. And while its true that many a downeast design can use trim tabs, the AJ is as stable and flat riding as the best of them.

While impressive, Wild Wild West did not go "airborne". She just passed me on the sidelines when she rolled. Splitting hairs, I know. I'm just glad no one was hurt worse than they were.

Also, it wasn't the normal operator running the boat.

Also, Lunasea was a beast! Fantastic to watch and listen to. Smooth.
E

Yeah, I didn't want to touch that one but .....I agree. The whole post made no sense. While my 28 never rode as nice as my 36 it was 1/2 the boat. I never experienced any of those things with my 28. I also never heard of a 28 fly bridge with a gas motor. As far as I knew, they were all aluminum 80 gallon tanks. I know Alan raced that hull plenty. I'm sure the boat handled well.

Only called it as I saw it or thought I saw it since it was a 26 Duffy, so I apologize for calling it a 28, my mistake, but it had the AJ logo/name but who knows, might not have been built by him. Never intended or implied bad work by anybody as I have seen where the customer gets what he wants engine and all and the fit and finish was a good cruiser style boat, not mickey moused by any means other than engine choice LOL. I do not think this hull was meant to go over 22knt and it did 26 cruise with the gas engine. My friend did the research since we did not cut the bottom on a whim because my friend talked to the orig hull designer who told him to cut out the bottom. I only did as I was told to help out a friend LOL
Last edited: Jan 27, 2012
D

F/V First Team said:
While impressive, Wild Wild West did not go "airborne". She just passed me on the sidelines when she rolled. Splitting hairs, I know. I'm just glad no one was hurt worse than they were.

Also, it wasn't the normal operator running the boat.
Click to expand...

Travis ... I was watching the entire thing through my binoculars and they were coming right towards me. Bumpy southeasterlies rolling up the bay and the Wild Wild West was to windward with the two of them just about even. They were planing but weren't anywhere near top speed yet. WWW rolled to port after taking a queer one and did get airborne as the next part of her that touched the water was the top of her stem and she did a near pirouette that kicked up much white water (and was probably responsible for taking our her windows). I think everyone watching was shocked that the injuries were as minimal as they were (a tweaked shoulder and a broken ankle, maybe???). No more deck-height engines after that season. I've got some pre and post-race photos somewhere and will post them if I come across them.
You must log in or register to reply here.
Share:
Facebook Twitter Reddit Pinterest Tumblr WhatsApp Email Share Link