Boat repowered in 2003 with new 200 hp volvo Penta tamd 41 p diesels zf 2 to 1 gears and new shafts and props. 2010 took motors out and had McDonnell marine did total rebuilds on the motors new cylinder kits injectors valves rebuilt injector pumps etc.....motors were rebuilt as maitenence not because of failure. I have 2000 hrs since then and doesn't burn a drop of oil between oil changes which are done religiously every 100 hrs

Boat cruises easily at 18-20 knots and will do 25. 75% load is 18 knots and will burn about 1.3 nm per gallon. Holds 185 gallons plus has an additional 50 gallon tank and can put two thirty gallon drums below deck for canyon or George's

The top was removed and a new hardtop was put in three years ago. It was properly decored and new marinelite windows were put in. Also has a removable winterback, bus heater and stidd chair

Great fishing boat will post pictures as soon I can figure it out.....I have pictures on my website but they are outdated and have the old top on the boat
Cape Cod Sportfishing Charters - Machaca Charters on Cape Cod and the Islands
M

I can email pics

How does she run with the twins?? Is the keel cut? 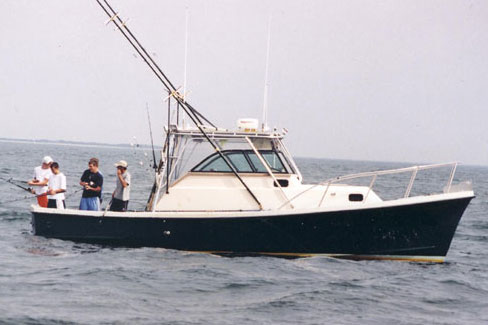 Good luck with the sale, McDonnell guys always seemed top notch to me if I am thinking of the CT Company. They came up to survey my TAMD41PA's during the sale of my boat.
M

That picture is of the boat before I cut the top off and built a hardtop...trying to get some pics up...the keel is cut and tapers back up into the hull. I have a single engine Jc also with the keel cut and the twin motors it performs much better in a following sea than the single McDonnell marine in ct has done the major engine work on the boat. I yanked the motors a few winters ago and we did all the work in their shop top notch operation. Brian McDonnell knew the boat from the previous owner and knows the history of the boat. He will tell you how well the engines have been maintained- oil changes etc....
M

It appears from viewing the image properties that you did not copy the entire URL of the image. 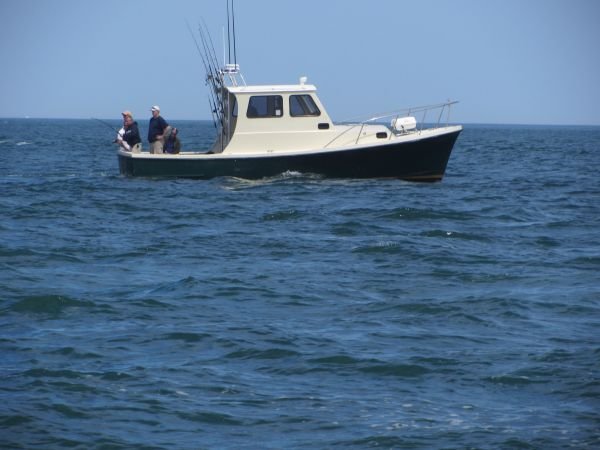 Going to be a sad day when the green hornet sells. That has been a great boat! I spent a few days and nights in the canyon with Willy fast economical and most of all very fishy! Good luck can't wait to see what u pick next!
M

I've been out with Willy several times on this boat. It's a great boat that handles real well. Can't wet to get out out on your new ride in the Spring! Good luck with the sale.

I have fished many times on this boat , Willy takes good care of it doesnt beat on it... and most of all it raises fish. I think you should replace with it with a 36 Northern Bay.
M

The Machaca is as seaworthy and fishy as they come, and has been expertly maintained throughout ... somebody is gonna get one hell of a boat
C 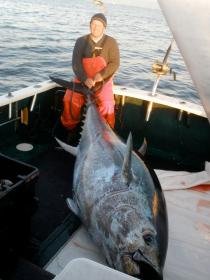 I think T-Ro should buy it
M

I was able to post pictures on Craigslist cape cod so a few on there.......
M

It is a cored hull. Vertical grain 3/4 balsa. As w most late eighty boats it has quite a bit of glass lay ups to go w the core....The last survey was done two years or three years ago and the surveyor checked the hull w the moisture meter no problems were found. I increased the water intakes for the raw water system and re did those through hulls and they were dry and sealed w resin. I decored resin coated and filled w hull and deck and gelcoated then reinstalled new raw water pick ups w life caulk. There are two underwater lights that the holes were also properly decored. The top is also core new only a few years ago every window cut out was also properly decored and sealed properly.
C