Has Duffy built many of the 38's? I have never heard much about them.Seems like they would be a great boat for those wanting to move from the 35 but not wanting a 42. How about some feedback. Performance etc.

I have one finished by Ken Flower. Built for tuna fishing with a 800HP Cat and a 23KT cruise. Today is not looking good in the office so tonight I can answer your questions and post some more pictures.

Look forward to the response.Thanks

Twin Fins up for sale??

Just have a dream.I guess it will be plan C or D maybe E. When I get over the charter scene due to regulations ,high fuel cost ,lack of people willing to pay the rates and just the bull s%$t that you have to deal with etc, etc.
H

Also looking forward to Frigate's reply. I don't think ABC has sold too many of these hulls, and also the page for the 38' on the website has said "under construction" for at least 2 yrs now. I have heard, through the grapevine, that it isn't as good of a sea boat as the 35', but that is only dock talk. Interested to get an owner's input!
S

this is just a guess

I think 42 ft is upper limit of DE for majority of buyers.

Sport fisherman are inclined to buy a Carolina boat or other twin screw which is more maneuverable and faster. The extreme bow flare makes the Carolina boats very small forward under 42 ft compared with DE
H

Great sea boat in any sea direction as well as on the drift. I have finished 2 of them. The first is the "C-Dawgs" which hails out of Bass River. The second is the "Susan B" which is currently for sale on Yachtworld. She is a big 38. Absolutley dwarfs the 35.

Susan B is a great looking boat!!

I believe that's the second Susan B downeast that has been listed in the past two years....the first was a 38' NB I think?
H

That's correct. That 38 NB is now the new "Destiny". We have an obsession (sickness) for finishing hulls. Honestly we sold the NB to build a smaller down east and then came along this 38 Duffy hull that my dad couldn't pass up.
H

Gotcha....so now are you guys downsizing, or is there a 42' Wesmac kit out there begging to be finished????
H

Maybe when I retire. We just can't justify the big boat with work and my kids sports. Besides, my old man is itching for a Florida boat. The 38 is a great hull though.....

As I said this morning today was not a good day in the office. Friday nights when we are not fishing are spent on the computer for my better half and myself. I got home and went though our built CD and wrote down the pictures I wanted to post. Then my better half said she has different plans for tonight. I will post in the morning.
H

Post up when you get the time, Frigate.
H

Hunta said:
Maybe when I retire. We just can't justify the big boat with work and my kids sports. Besides, my old man is itching for a Florida boat. The 38 is a great hull though.....
Click to expand...

Hunta....what are your thoughts on the Evolution drive? You may have seen the thread on here about the +'s and -'s....looking for another first-hand opinion.

We had the Duffy finished for tuna fishing and so we could spend the weekend on it. Atlantic Boats sent us scale plans of the boat and we spent a year getting things where we wanted and so they would fit in the boat.

I agree with Hunta the boat likes any sea but if I had to pick the sea it likes the least it is a dead on head sea. A few degree off dead on is no problem. Yes it is a big 38'. "Absolutley dwarfs the 35." That is an under statement. If you put the 35 and 38 next to each other it looks like you could put the 35 in my cockpit.

The boat cruises at 23kt burning 28gal/hr and we can get down to 3kt with the trolling valve. At 600rpm the boat does 6kt and at 550rpm with the slow engine switch on it does 5kts. We are docked on the south end of the Shinnecock Canal. The tides of Peconic Bay and Shinnecock Bay are opposite. There are locks in the canal that only let the current flow south. Docking at 5kt backing with a 3-5kt current is fun.

That is something about the boat I had a ton of pictures of the build and boat. Ask any questions you have and any pictures you want to see and I'll post them.
K

Sounds perfect, can I have it?!! Nice ride!

After looking at my post I see I left out a few things. There are two 40gal. fresh water tanks in the stern, the toilet is fresh water to cut down on the smell, there is a 64gal. holding tank, and all the windows and door are Diamond Sea Glaze.

Here are some pictures inside the boat. 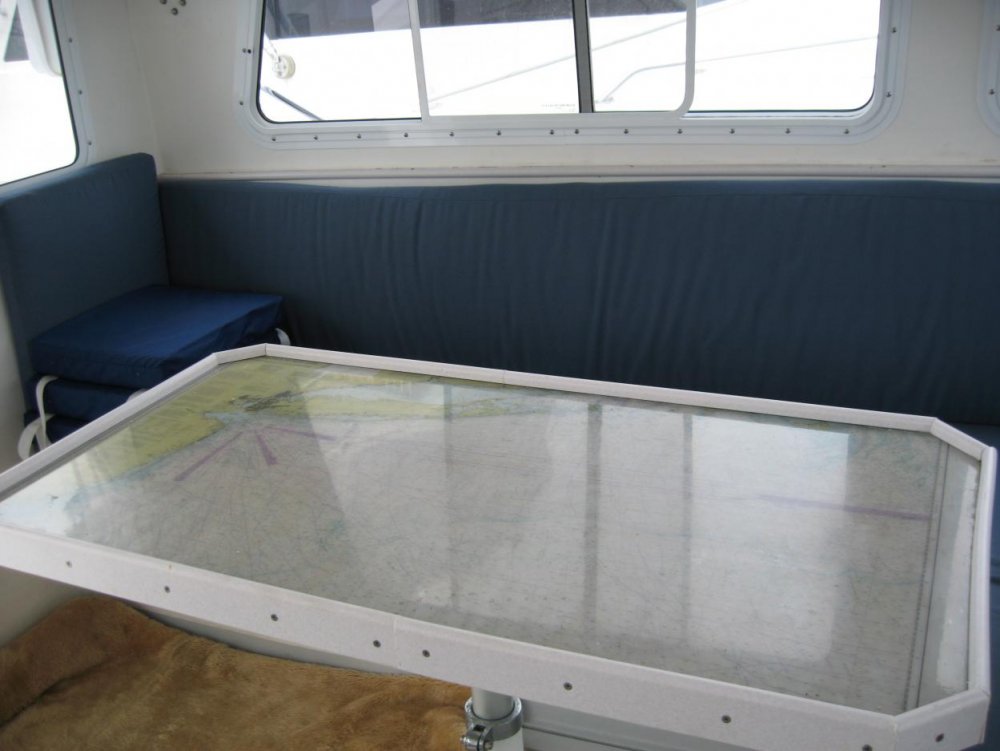 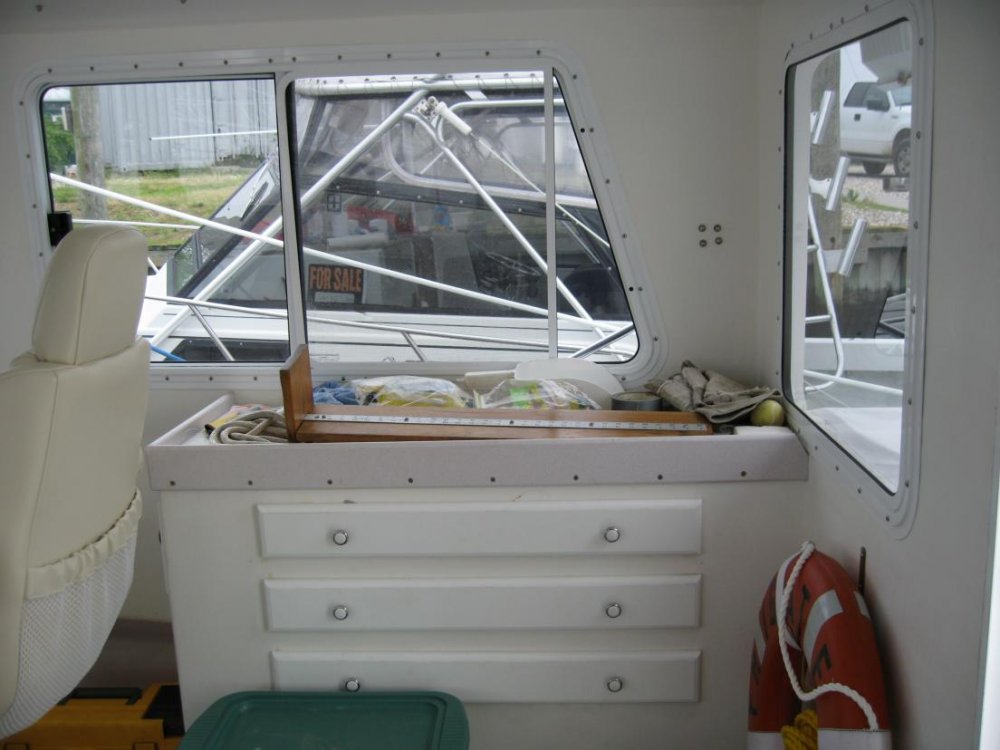 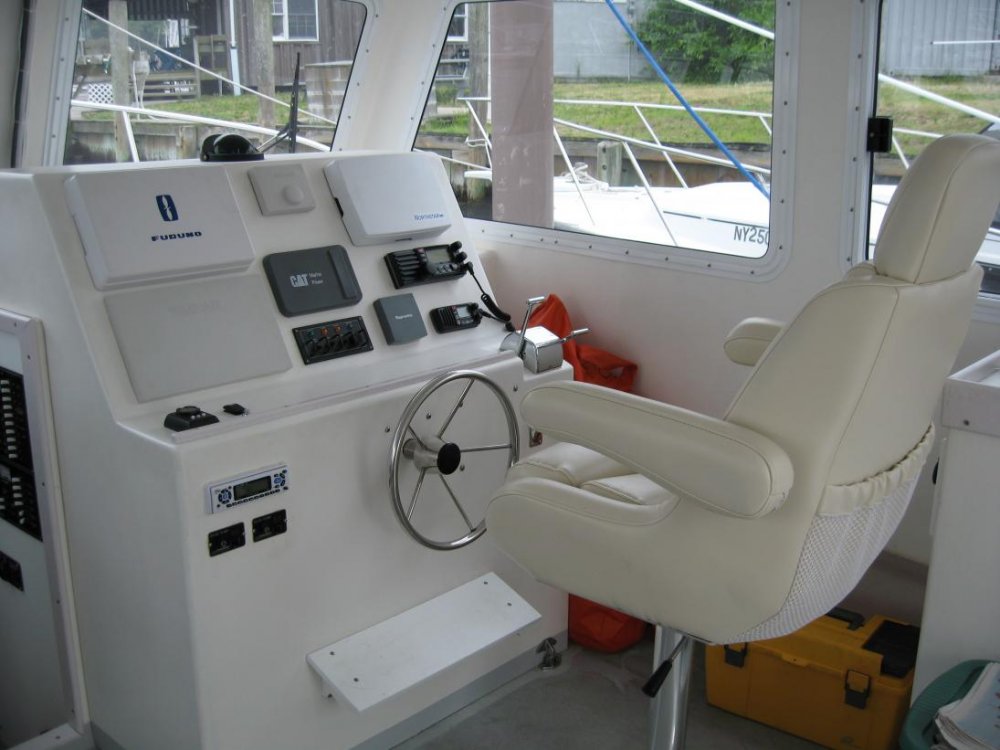 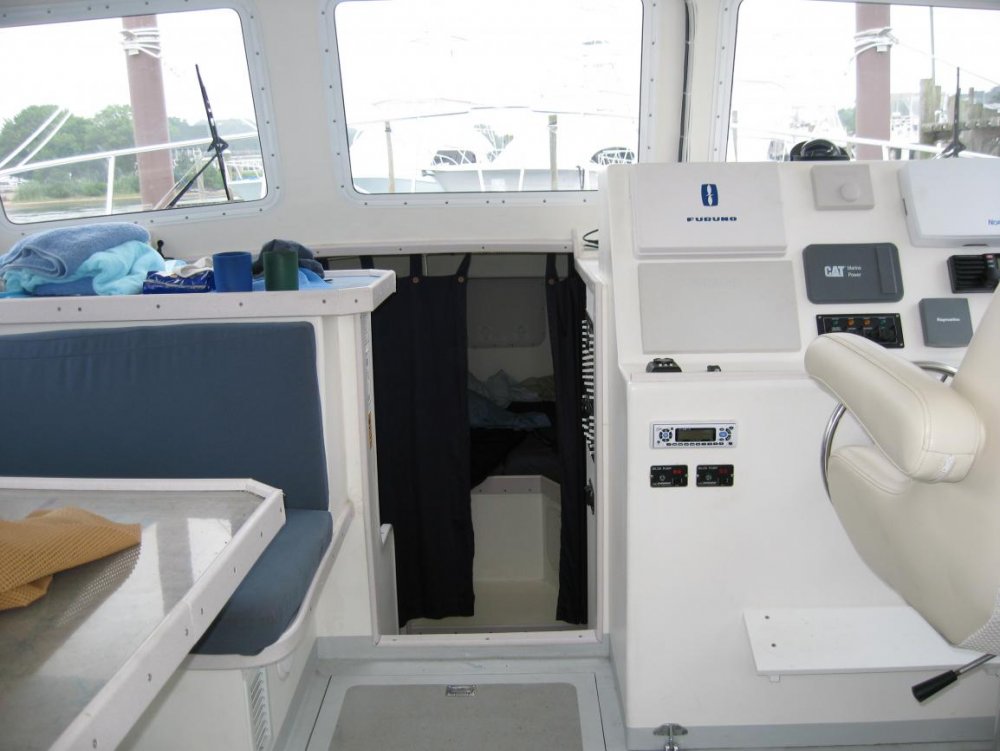