Random article I found from the Portland Press dated 2010 about the decline in downeast boat sales.

The Associated Press
JONESPORT â€” For the first time in 24 years of building lobster boats, Wayne Beal doesn't have any job orders.
He has a 42-footer under construction at his boatyard -- but he's building it for himself, so he can give up boat building and go lobster fishing instead.
In Maine, where lobster is king, Beal and other lobster boat builders are braving tough times. With the lobster catch down and fishermen feeling an economic squeeze, boat sales have hit the skids.
So even with the uncertainties facing lobster fishermen, Beal believes he's better off doing that than sitting around and hoping for more boat orders to come in.
''There's not a lot of guys making the move to take on a new boat. And the economy is on its face, too,'' Beal said in the cavernous, high-ceilinged boat shop where he has built scores of fiberglass boats over the years. ''This is the first time I've had to lay crew off.''
In Down East Maine, lobster boat building has a long tradition as a provider of jobs and money in a region that is short on both.
Fishermen have been buying boats for as long as they've pulled lobster-filled traps from the cold waters off Maine's rocky, seaweed-covered coast.
In early times, fishermen used rowboats before graduating to larger motorized vessels. Over time, the lobster boat evolved into a simple design featuring a high bow, a small cabin and low gunwales making it easier for lobstermen to lean over and tend their traps.
In Jonesport, which some regard as the birthplace of the modern Down East lobster boat, there's no doubt about the importance of the industry: Lobster boats and traps are stored in yards, some road signs are in the shape of lobster boats, and the Independence Day celebration features lobster boat races.
Here and elsewhere, lobster boat builders enjoyed boom times as the annual harvest of Maine's signature seafood more than doubled from the 1990s to more than 70 million pounds this decade. To catch all those lobsters, fishermen needed big new boats with powerful engines and fancy electronics that could cost $250,000 or more.
But the high times have been replaced by a sober-minded sensibility.
Last year's harvest was down 23 percent from 2006, and nobody knows what this year will bring. At the same time, fuel, bait, traps and other costs have surged for the state's nearly 6,000 licensed lobstermen.
And with regulations limiting the number of fishermen and traps and requiring expensive rope to protect North American right whales, lobstermen are in no mood to take on more debt. The result: Fewer orders for new boats and a weak market for used boats.
Some boat builders -- including many of whom have been around for decades and whose boats can be found all over the Northeast -- have shut their doors. Others are seeing sharp drops in orders or turning to the pleasure boat market for business.
Young Brothers, a well-known builder in Gouldsboro, closed last year after 31 years in business and 550 boat deliveries.
At Holland's Boat Shop in Belfast, lobster boat orders have evaporated for Glenn Holland, who is now making only recreational boats.
On a recent day, more than a dozen employees were working on four boats inside H&H Marine in Steuben. Even though the yard looks busy enough, orders are on the decline, said co-owner Bruce Grindal.
During the go-go years, H&H was making about 30 boats annually.
Last year the number dropped to 15, and Grindal cut his work force from 24 to 16.
''This year is anybody's guess,'' he said.
The used boat market isn't much better, Holland said. ''For sale'' signs can be found on many wharfs, and there's no shortage of classified ads for used boats in commercial fishing publications.
''And the prices keep dropping too,'' said Holland. ''Sooner or later they get to the point where they're practically giving them away.''
Maine's lobster catch last year was valued at $243 million; in the peak year of 2005, it was worth $317 million.
But the lobster industry is far bigger than that.
Boat builders alone contribute tens of millions more dollars to the economy. There are perhaps a dozen or two companies that build hulls and tops of lobster boats, and dozens more people who finish off the boats.
Beal is a typical lobster boat builder in many ways.
He was pulling lobster traps by age 7 while growing up on Beals Island and became a full-time fisherman when he came of age. He later switched over to boat building and started his own business, Wayne Beal's Boat Shop Inc.
Since 1994, he's built boats ranging from 32 feet to 46 feet long inside a 6,000 square-foot building that has a lingering smell of fiberglass resin. He's now building the ''Kendrick and Chandler,'' named after his grandchildren, which he hopes to have in the water by July 4.
Beal's thankful he can at least return to fishing, given the downturn in the boat market.
The phone stopped ringing with new orders last fall, but he can hardly blame the fishermen given the rising costs, the falling catch and the threat of new regulations.
''It's putting so much pressure on the fishermen that they're holding off going into debt on a new boat,'' he said.
''And the young people coming up, you're not selling anything to them because they don't know if they can get into the fishery or not.'' 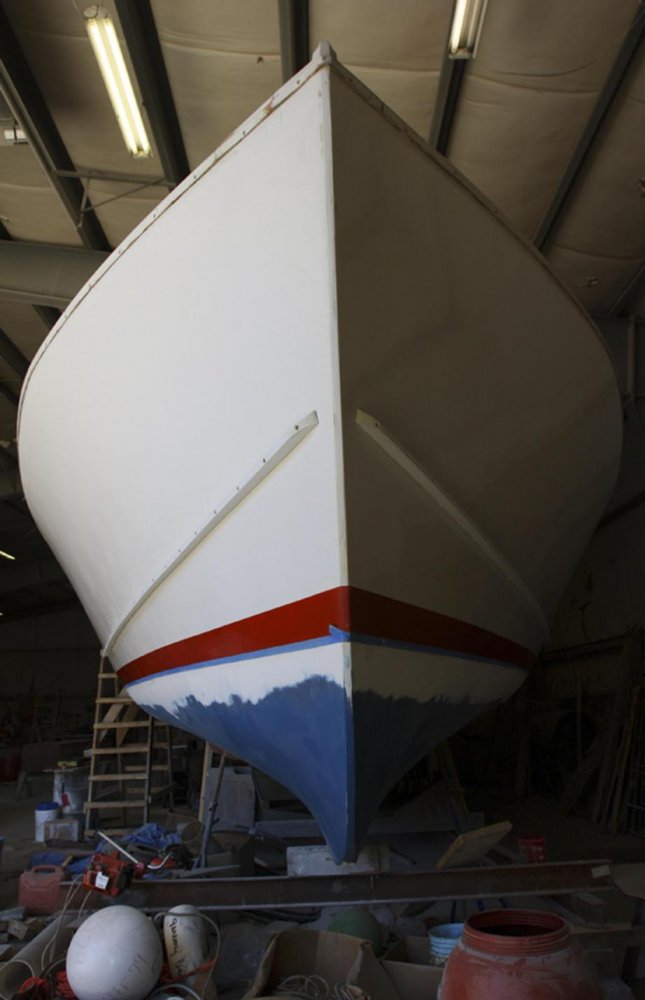 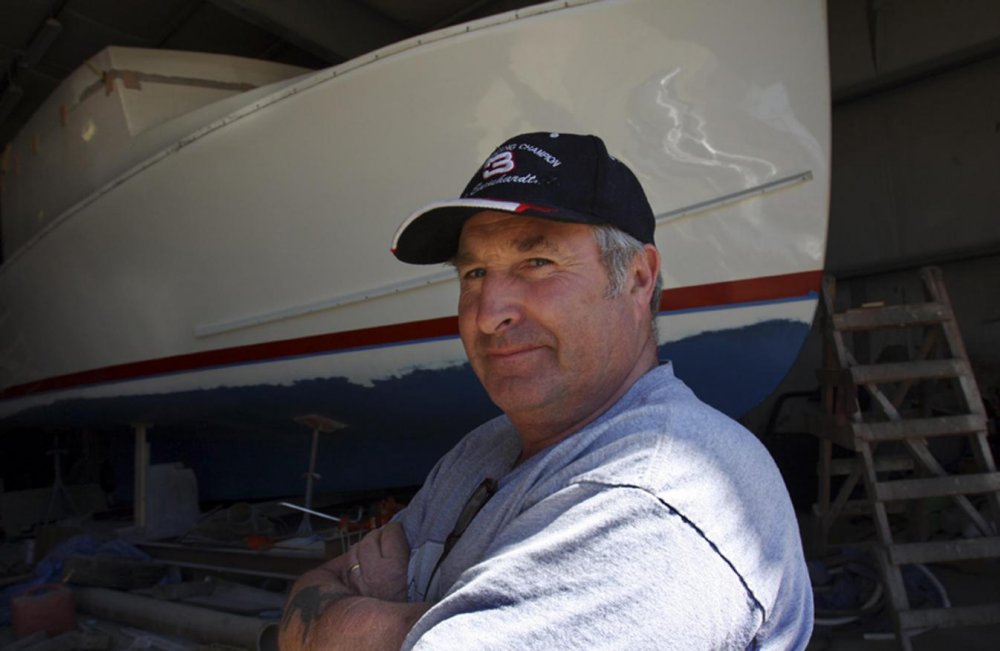 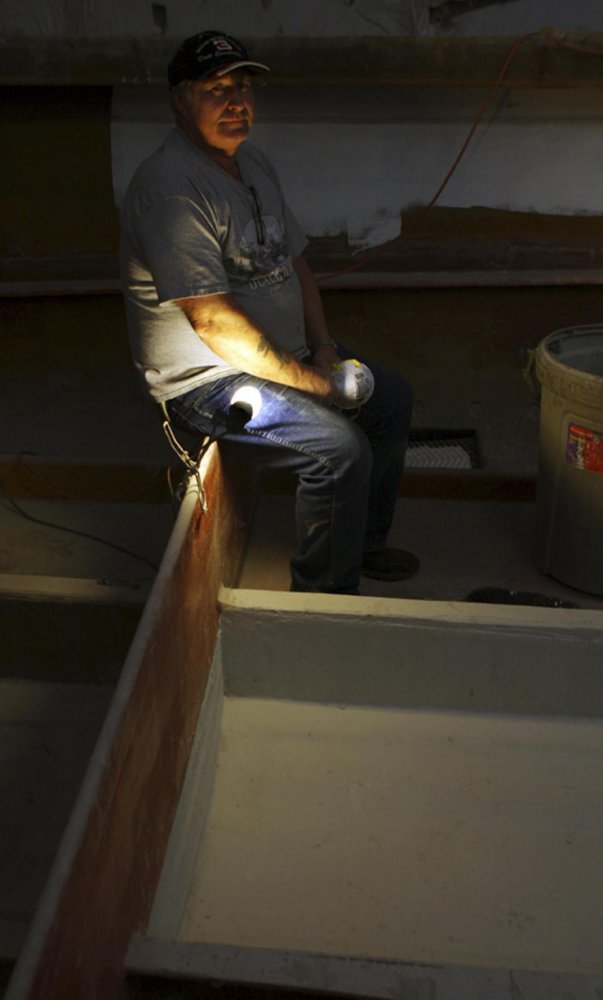 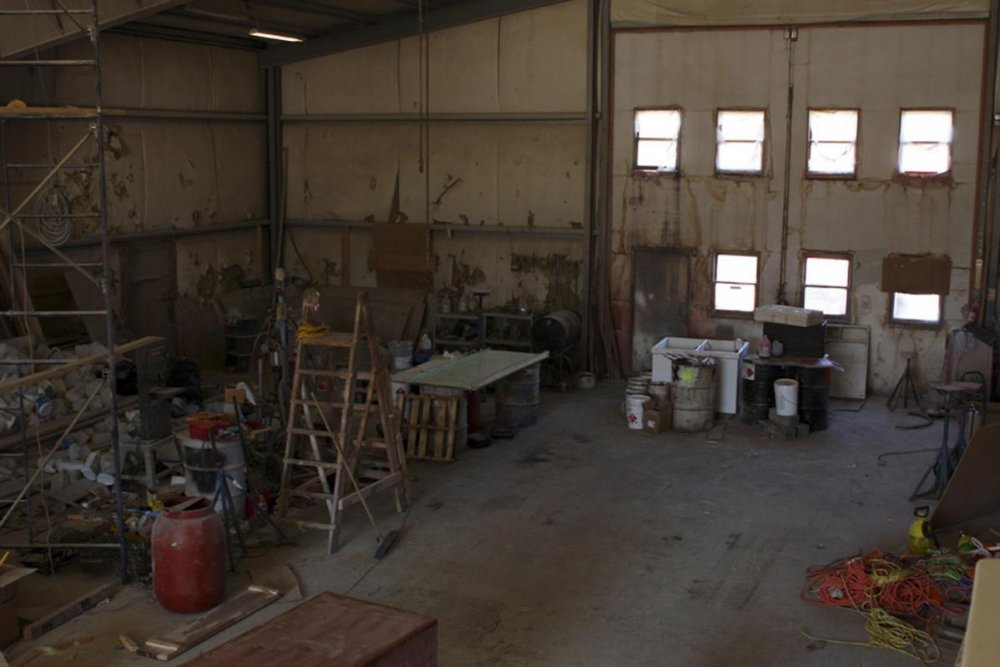 a few pic if the best downeaster i ever owned 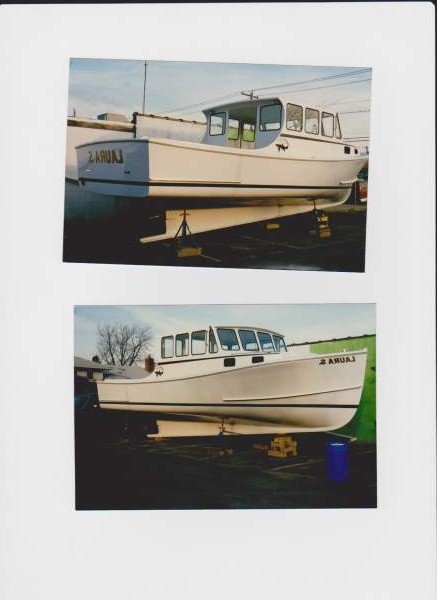 nice article. thanks for sharing.

MDI45 said:
a few pic if the best downeaster i ever owned
Click to expand...

Hey looks like you figured out how to post the pics! did the youtube video work that I sent to you?.. that is the 36 WB? tits

MDI45 said:
a few pic if the best downeaster i ever owned
Click to expand...

Is that the 40 Wayne Beal?? What happened to it?

jojobee said:
nice article. thanks for sharing.
Click to expand...

no problem.. it wasnt "up lifting" but figured you guys would want to read it..

thanks bill i got it.....Elmar that is a pic of my 36....and here is a pic when i was finishing two wayne beals in the parking lot of my bait shop in the late 90's 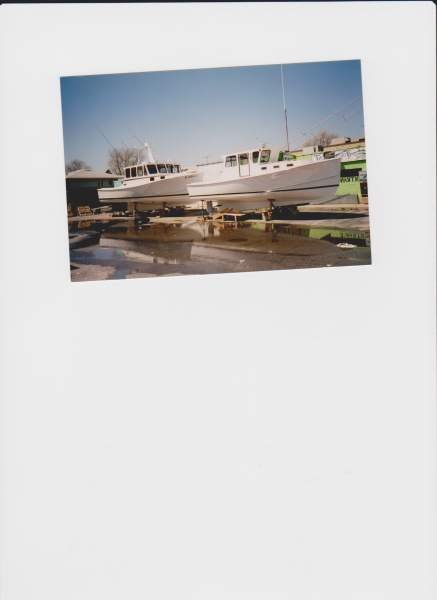 VERY SAID, I lobstered for some 25 odd years,been on water the before i could swim. the lobster fishery is gone down here, (long island sound )!! at one time 3 pot trawl one nit set 72 keepers back in the 90s quit in 2002 rise in fuel & bait coast let alone two deck hands. in 2002 when it was too be the best time of the season, would haul 300 pots on a 5 nit set !! and catch only 7 or8 keepers and do that for 2 or 3 months and take a good long look at the BILLS and sit in awe, ITS TIME TOO MOVE ON. YES IT IS TRULY SAID.

Hey J dandy,when i built that boat in 1996.....i was paying .79 cents a gallon for fuel on the south shore of long island...whats goin on in this country

yes and a barrel of bait was 18.00 delivered. you remember the west Nile spray job up in the west of long island sound that was the END! if i remember that was 1997 was all down hill from there.

Here is a few more pictures of my old Wayne Beal 36...i bought a kit from the King of the downeaster..it was a beautiful boat..then i got the big idea to build a bigger boat....bigger is not always better. 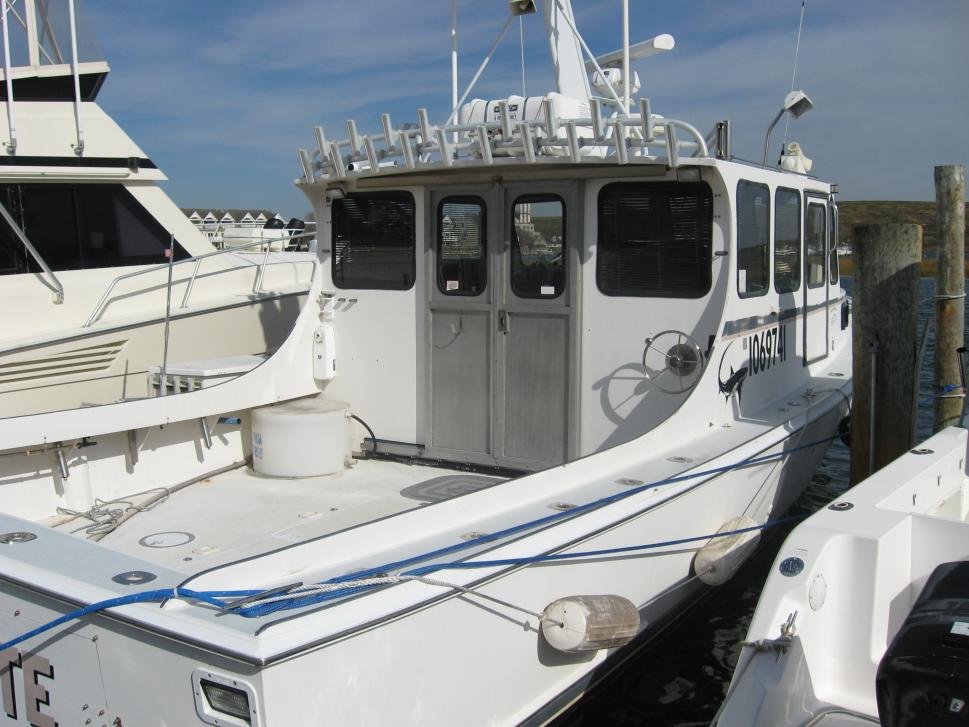 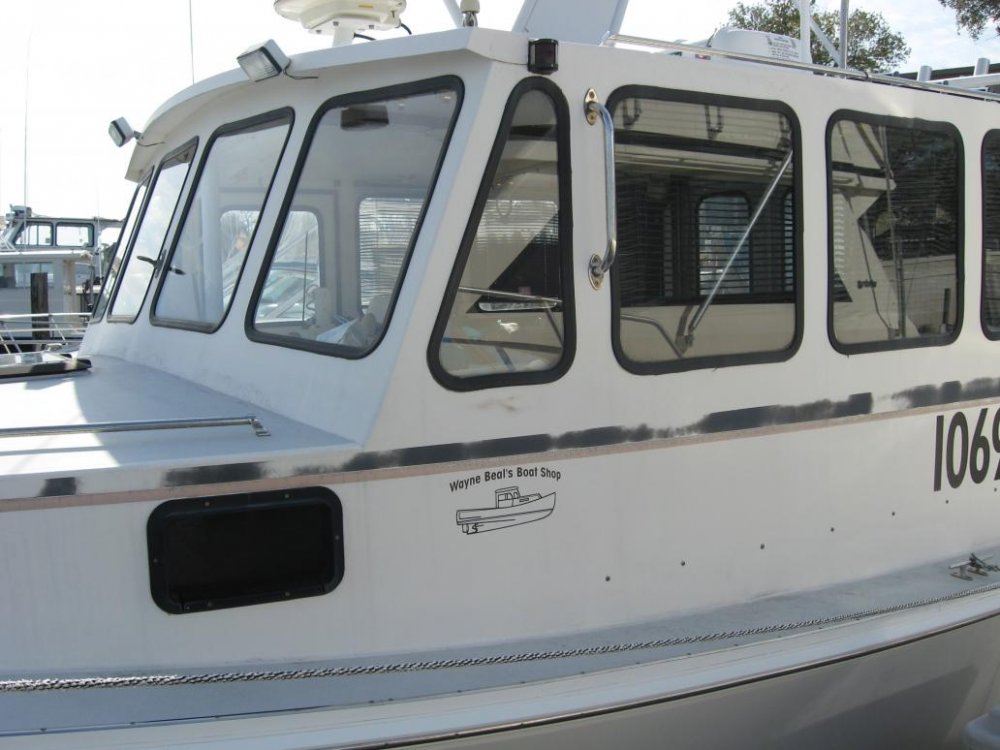 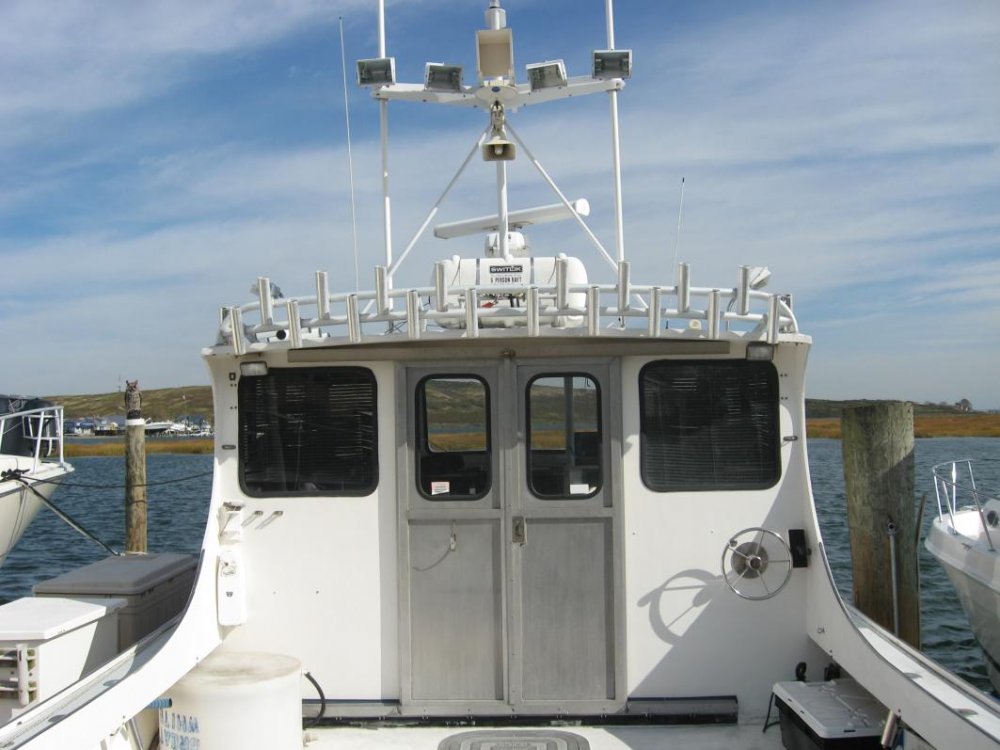 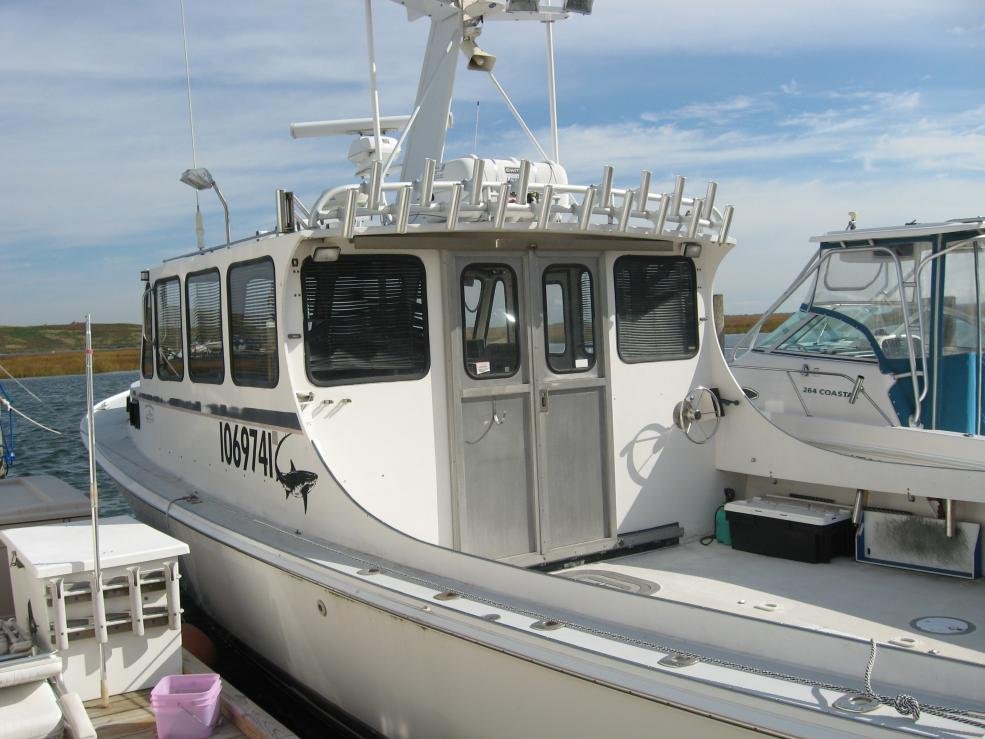 There was just an article in the Maine Sunday Telegram about the Long Island Sound die off.The govt still denies that the spray had anything to do with the die off,and continues to spray.

Great article, but on the other hand very sad. This country has headed in the wrong direction thats for sure

Parker2320 said:
Great article, but on the other hand very sad. This country has headed in the wrong direction thats for sure
Click to expand...

Parker , I will second that..
J

Too much gov't interferance !!
S

Md, got any pics of thw WB salon?
T

Bigger is not always better