It looks like I need another set (at least one) of 8d batteries. I'm thinking of switching to agm's so I don't have to replace them every 2-3 years.

Anyone have a good supplier in the ri area? These things can get very expensive, but like everything else it depends where you get them.

Costco has them here so i'd bet if you have one nearby it might pay to look.
1

I know that Napa, carquest, and sams club also carry them. I saw one at sams club the other day around $180. I don't know the specifics on it though.

Just my opinion,but I have Interstates in boats and have got as much as 13 years out of one set.I always fill with distilled water.
P

try to avoid the napa 8d batteries, it's been years and years since i have used them, but couldn't get a year our their 8ds

I should have qualified it with I'm looking for a quality battery, not necessarily a rolls, but something with some lead in it.
0

Interstate doesn't have an 8d battery, at least not according to their website. Same for sears.

The NAPA batteries seem to range from crap (some weigh only 116 pounds) to ok, but the ones with ok specs are expensive for their class.

I'm guessing the costco/sams batteries are light as well. A good 8d battery should be 160 pounds or more.

My boat came with rolls batteries which lasted over 7 years. I was in a crunch and let the marina replace them, and now 2 years later hey are failing. I have a quality charger so it is cycles that are killing them.

I'd like to get over 4 years. I have good access but at 160 pounds each no fun to hump around.

Have you tried calling Rhode Island Battery in Warwick? They can help you for sure. I have a pair of 8D AGMs and they have been great so far.
P

Try C. E. Beckman in New Bedford we use them a lot. They carry AGM.
P

i just use two 1000 cca batteries, not a fan of the 8d, unless you have a big motor that absolutely requires them

It is a long story, but I could probably deliver them to the Point on Friday or Saturday if it helps.

Also Deka Batteries in Rhode Island. Batteries are East Penn good batteries anything you want including AGM at good prices

Rolls... not worth the extra money IMO. Years ago Rolls claim to fame was that they could/would clange out a dead cell for you which may have made them worthwhile. But they haven't done that for years.

Greg, seems short service life you are getting. Are they up against your stringers or over your prop where they may get too much vibration? Over/under charging?

Brooksie said:
Rolls... not worth the extra money IMO. Years ago Rolls claim to fame was that they could/would clange out a dead cell for you which may have made them worthwhile. But they haven't done that for years.

Greg, seems short service life you are getting. Are they up against your stringers or over your prop where they may get too much vibration? Over/under charging?
Click to expand...

Nope, well off to the side and midship. I have a Xantrex 50 amp charger and I'm not burning a lot of water in either one, so I doubt its overcharging.

I think my problem is undercharging under the alternator. I'm using about 32 amps of load with electronics and other small stuff (can go up to 35 or more with lights on), but I doubt the alternator puts that out at idle or trolling speeds so the battery will be in a state of discharge for an extended period. Batteries, especially cheap ones, don't like to be cycled like that.

I could upgrade the alternator to a higher capacity model (currenty using the oem sized 80 amp) or rewire so I have a separate house and starting config. Right now its wired so house and starting loads are together and on the alternator. Two batteries, on an a/bb switch, so one is on duty and the other on stand by. The standby is on the charger if the gen is running. If I rewire, I can have the charger on the house battery which will put out more amps.

One battery is worse than the other which makes sense.

Easiest route is just replace them then worry about the load/alternator.

You are correct sir! I stand corrected.

They have a very difficult to use website. The 8d batteries are hidden under commercial truck batteries, and you have to select all batteries to see them. Ughhh.

Anyway, reasonable specs and easy to find. I guess I should also look at alternators.....

And finally just to tie this out, here is the power curve for my alternator. Like I suspected, until it is above 1800 rpm's (probably 2000+ in real life) it isn't covering my charging needs and the battery is discharging. 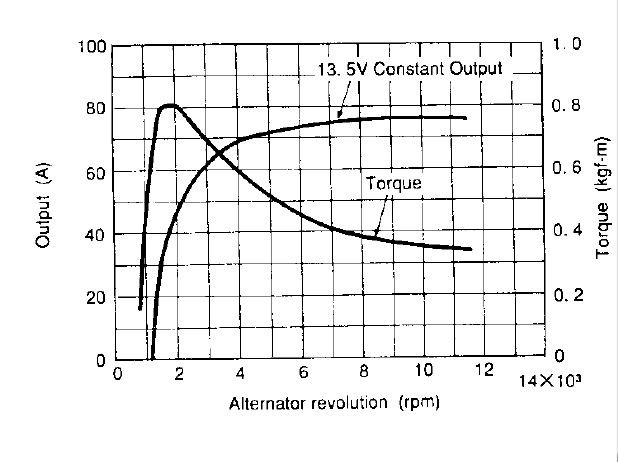