The purchase of the 32 Holland is getting quite near. And in anticipation, I am planning on the construction of an integral fuel tank. It will be a fiberglass tank and located in the stern, above the deck, and under the washboard.

For those who have built an integral fuel tank, what bit of knowledge can you share?
Last edited: Nov 23, 2011

Chris, it wouldn't hurt to give Glen Holland a call.
As you know, that's where he installs the fuel tank on the 32's as "standard" equipment.
G

Already spoke to Glenn at length. Almost hard to get off the phone with him once I told him that I had one of his original 32 Holland's in Florida.

He advised me to do 2 things for proper weight distribution: 1) put the #3 cylinder of the engine exactly 16ft forward of the transom (assuming a 6bta) and 2) put a 100-150 gallon fuel tank in the the transom.

Doing this will get the nose of the boat slightly higher than level while at rest which is ideal for handling and speed.

Of course, he tried to talk me into a gasoline powered engine instead of a 6bta. I declined.

Great speaking to him..... he's a wealth of information and shares it readily.
T

I am excited to see this come together. I hope everything works out for you and you get the boat in your hands in the new future.

I find it amazing how he knows exactly where to put that cylinder. That is why I want a downeast built in Maine. They KNOW their boats and are not just slapping pieces together.

Good Chance I cannot wait to see your newest project get underway.
G

Thanks. Looking forward to posting more pictures. It looks like I might pick-up the boat on friday or saturday. I'm working on an engine now.

Sweet, we want to see a lot of before pictures!!
G

Looks like hell right now el Mar .... but at least she isn't "cooked". Everything has been removed. Only the engine/hull stringers and a steering ram are left.

Noby in FL has any idea what a 32 Holland is so the user blew the engine .... the decks were starting to rot so he just "let it go". The Cabin is gone. The bulkheads were removed .... not sure why. Just a shell. Although the engine mounts are still present.

Chris, when you got your cooked Duffy it was at a certain point. The Holland from what you say is at the same point but it got there from a different way. Good luck with your rebuild.
C

Sounds like a big job. I assume that you will be upping the shaft size to at least 1 . If so with the motor out you should lose the bronze stern bearing and slide in a full length wet tube. The wet tube is the way to go. You can push the tube out a little further from the keel. Next you can mold a fair it into a smooth flowing until for good water flow. It is not a hard job and it is zero maintenance once installed.
Last edited: Nov 23, 2011

Hi Chris glad you found something close to home! I would consider using epoxy for the tank but of course can be done with poly using vinylester as I have heard that vinylester will not react with ethanol just in case they ever add it to diesel. I would form it out of one piece bi-axle cloth if possible though in most cases you will have a seam and that ok but and Use plenty of baffles for strength before adding top. I purchased the kit from AB on my Duffy and added extra baffles then gel coated the inside. I then wiped it all down with acetone till I was sure I remove all the gelcoat wax. On the top I had a ss plate made for the pickup and returns, then glassed in blind nuts to screw to. This gave me a port to clean out if I ever had problems but you could also glass in a thick square pad to drill and tap for your pickups and returns. IMO the next most important thing is how you mount it into the hull depending on shape. On the Duffy kit its square and molded into the shape of the curved side. This allows you to glass it in ridged rather than strap it in so I bedded it on 5200 globs and left no holes to get water in or out as there is only a small gap left around the entire tank making condensation less a concern since its airtight. On a long rectangle tank I would hesitate to glass it in due to flex issues. Though I do not agree with a lot of his stuff, Pasco has a good article on tank mounting. Though it does not apply to your transom mount, if you deck over the tank, again take care of the load put on top of the tank if it’s that close to deck frame to get the most gallons you can. I used a 1/2" gap of 5200 under the deck framing also to absorb some flex and prevent abrasion. Test to 3lbs or fill with water before installing. Having said all this, it took me 2wks to build mine and probably would purchase the complete finished tank from Duffy if I had to do it again and could afford it as it’s a lot of work. I added a center tank a couple yrs ago and had a plastic tank built that leaked in 6m but the FRP tank I built has had no problems. I have put my Duffy through some heavy seas tuna fishing for the last 13yrs and all is well.
Last edited: Nov 24, 2011
G

Thanks Vince. Hope you are well in Hong Kong. Have you started anything with your 32 BHM?

I read through a some articles written by West System regarding the construction of an integral tank using epoxy and what they said is "spot-on" with what you said above. THANKS!

I think my tank will be a bit easier than what you built with your Duffy. Mine is just a rectangle using the transom of the boat as part of the tank. All above deck. Your tank was irregularily shaped and need to factor-in the position of the deck timbers. Your's was very complicated.

Thanks for your help and I'm sure I will be tapping into your experrience in the future.

Starting to plan out the BHM and will leave it as is instead of a walk around for now. Will set up as a stick boat with just a vberth just in case of an overnighter at some away port in Ptown or Maine. Should move along with 450Hp. Check your PM regarding prop calc. Take care looking forward to your 32 build project pics Happy Thanksgiving to all!!
Last edited: Nov 24, 2011
S

You should consider a V-drive transmission for the Holland. Then you could put fuel tanks under the decks. Talk to Glen, he has installed a few. No engine down forward.
You have an engine box either way, but atleast you can go down below without having to step over belts and pulleys.
G

sailboatssuck said:
You should consider a V-drive transmission for the Holland. Then you could put fuel tanks under the decks. Talk to Glen, he has installed a few. No engine down forward.
You have an engine box either way, but atleast you can go down below without having to step over belts and pulleys.
Click to expand...

You are correct, a V-Drive works quite well in a 32 Holland; able to move engine aft, move fuel cells forward and keep the cabin free of the engine. But....

I don't terrible care for v-drives. I know that Glenn likes them but he is an unfortunate minority. My experience with v-drives hasn't been positive. Difficult to align, more parts to break, loss of hp and a lower re-sale value.

But many people like the v-drive. For me, the positives overshadow the negatives.

But as you point out, having the belts up in the trunk cabin isn't ideal.
M

Certainly this guy believes in them. 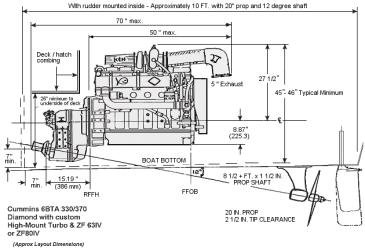 Chris, Maybe these pics may help a bit. One surprising thing is that with the fiberglass tanks you lose capacity due to the wall thickness of the
core and glass - more than you might expect. Note, the grooved area on the tanks "lid" is where the balsa was decored and made solid, which is where most of the fitting are. The pick ups are at the rear of the tank. 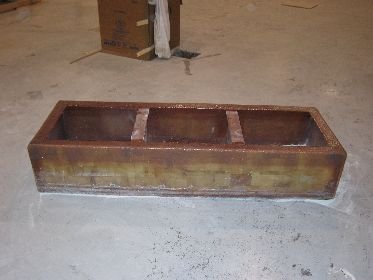 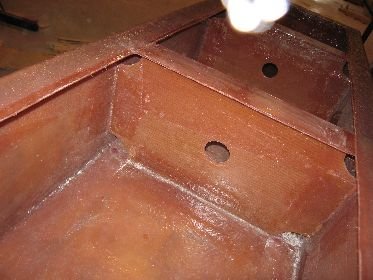 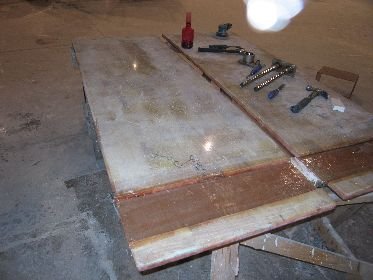