Congrats on a giant bluefin.... Story at mvgazette.com

Off to a roaring start after all that hard work on the boat. Congratulations.

Congratulations Tim...Thats the way to break her in

Location
Portsmouth NH, boating out of the mighty Merrimack

Certainly $puts back$ some of the time, effort and cost of the rehab project we all enjoyed over the winter
H

Almost didn't even see this thread. Thanks all. First trip east for giants after fishing the canyons for 21 days. Didn't even realize it was my birthday until after we landed the fish. What a battle though, my new official best. 8 hours and the first time we saw color was in the end. My hats off to that fish, I can still barely move my arms along with my mate's. Couple more pics

Congratulations Tim. I respect a man who puts his time in. You deserved that fish. Keep em coming!

sick man....what a debbie downer that other guy was on that thread lol...I dont know much about the giant game but I assume anyone who does it knows the name of the game is to keep it fresh and not burn the meat...gj man

Congrats man! thats a hell of a fish!!
G

Congratulations Tim, that is one wicked tuna!
D

What a Great job on the re-build. What a better way to start her off than to catch a HOG like that ! Very nice. Hope you're luck stays with you !!

Great fish and well deserved after the work you put in on the boat. Hope you ger a few more before the season is over.

Way to go Tim. I hope this is the first slob of many to come. A bit of payback for your sharing of a fantastic build project.

My bud Mike on "Fishbucket" got a call from the guys at Red's saying his record was smashed. (prior he had their largest @ 750lbs whole)
He was in at Red's a few days later icing up and saw the beast.
He said 698 dressed.
Congrats and hope it pays $ well.
Mike said it looked like it had been through a battle, possibly from trying to get it over the side and into the boat.
Was amazed looking at the fish on the pallet and the guys from Red's said, "Thats the good side up" 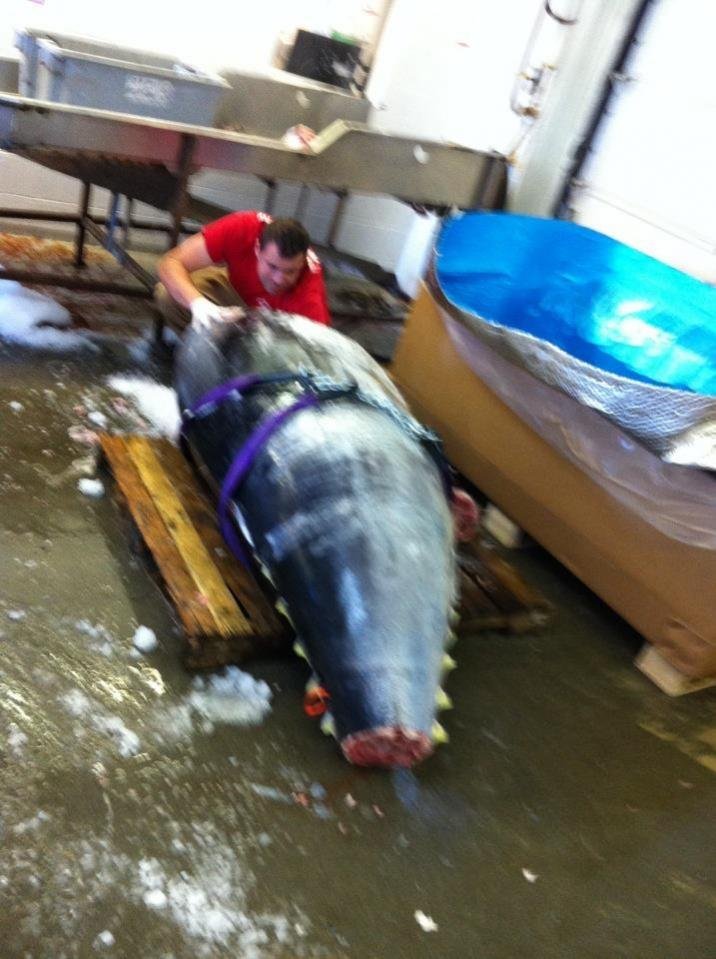 Weight was 799 dressed at the truck. That was with the entire head off and gutted. One side was chaffed up due to heavy seas trying to bring it aboard with the block and tackle. Then JP put the good side down in the truck. Tried to stop it but it was too late. Oh well. Got my boom on waiting for the new winch to arrive then headed back out. Nice piece of aluminum I-beam.