MAArcher said:
Tipjar's not going to have any floatation, not even sealed bulkheads? Seems like a really bad idea to me, especially on a small boat? I'd rather have to rebuild the boat in 20 years than sink after a mishap that foam would have saved me from.

On the PT stuff you've seen, any evidence of resin not bonding to it well?
Click to expand...

It might bond temporarily, but it will not bond long term.
Don't use it as as a stringer and attempt to glass it to the hull.

MAArcher said:
Tipjar's not going to have any floatation, not even sealed bulkheads? Seems like a really bad idea to me, especially on a small boat? I'd rather have to rebuild the boat in 20 years than sink after a mishap that foam would have saved me from.

On the PT stuff you've seen, any evidence of resin not bonding to it well?
Click to expand...

If you look back at my thread the bilge is one big air pocket and the venting will be somewhat of an air trap. What mishaps are a concern? I don’t boat at night, if I do it’s slow… very slow and cautious. I plan on three bilge pumps. Two aft and one forward in the bilge. I am obviously not heading to the canyons. Probably never far from land.
I lobstered out of a 12 foot skiff for 7 years out around Boothbay Harbor and Linekin bay. Cruised to many of boat races and never had an issue. If that foam gets saturated and can cause more safety hazards than prevent. I have never seen a foam filled boat not get the foam wet. Either through condensation from inside the void or some chowderhead installing hardware incorrectly.
It’s really funny that to some size matters on this. A 48 Mussel Ridge has more potential to sink than a 20 ft outboard boat. Yet builders are not filling these things full of foam. If anything I have seen more builders staying away from it.

harpoon83 said:
It might bond temporarily, but it will not bond long term.
Don't use it as as a stringer and attempt to glass it to the hull.
Click to expand...

Yeah I should reiterate that. PT is fine for deck framing, but not anything you are going to glass.
My brother used epoxy coated dug fir on a boat and it worked well. Light and the wood helped absorb vibrations and sound.
Marine grade plywood it another option. You could laminate it to make 2X stock. But then you are adding lots of weight.
T

As I layout the longitudinal and latitudinal stringers, it would be helpful to know where the best placement of the center console and seat would go. Is center of gravity a concern? I’ll be using the boat for fishing.

Weight distribution fore and aft is super important. Get the structure built and the deck in and then float it off of a trailer with some barrels of water that will simulate people and the CC. That will give you a good idea of where to place everything in order to get it floating just right.
T

PatriciaLynn said:
Don't make the hulk thicker, use structure to reinforce it. Done correctly, it will add a ton of strength and be WAY lighter than just adding material to the hull.
Click to expand...

I agree with this and what Eastporter said about not coating from the outside, but a few strange things happened with my hull.

After I transported it 500 miles and put it in the water, I noticed there were tiny fractures at the waterline where the trailer rollers support the hull on an old trailer with rusted solid leaf springs. No problem, I simply cut out the bad material and replaced with new.

Then a few months later I saw that the bow had been repaired and looked a little off. So I started picking at it with the claw end of a hammer. I got hold of a piece of gelcoat and fiberglass cloth and pulled on it. It pulled free as a single strip all the way back to the stern. Then I was able to keep removing the rest of the outer skin of the hull until the entire hull (except the transom) was stripped down to a very thin layer. There was very little bond between the outer cloth/gelcoat and the inner layer of fiberglass.

So, this being as thin as it was and knowing I fish the canyons, I wanted to make sure that there's material in the hull.

Like I said earlier, I think just one layer of 1200 or 1700 would have been fine for my hull, two layers of 1708 was overkill, but I've never peeled a boat like an onion before. Certainly my preference would have been to add this layer to the inside of the hull instead of outside, but I didn't have access from the inside because I wasn't replacing the deck and stringers (both recently replaced and solid) and the outside peeled off, so that's why I added material from the outside. 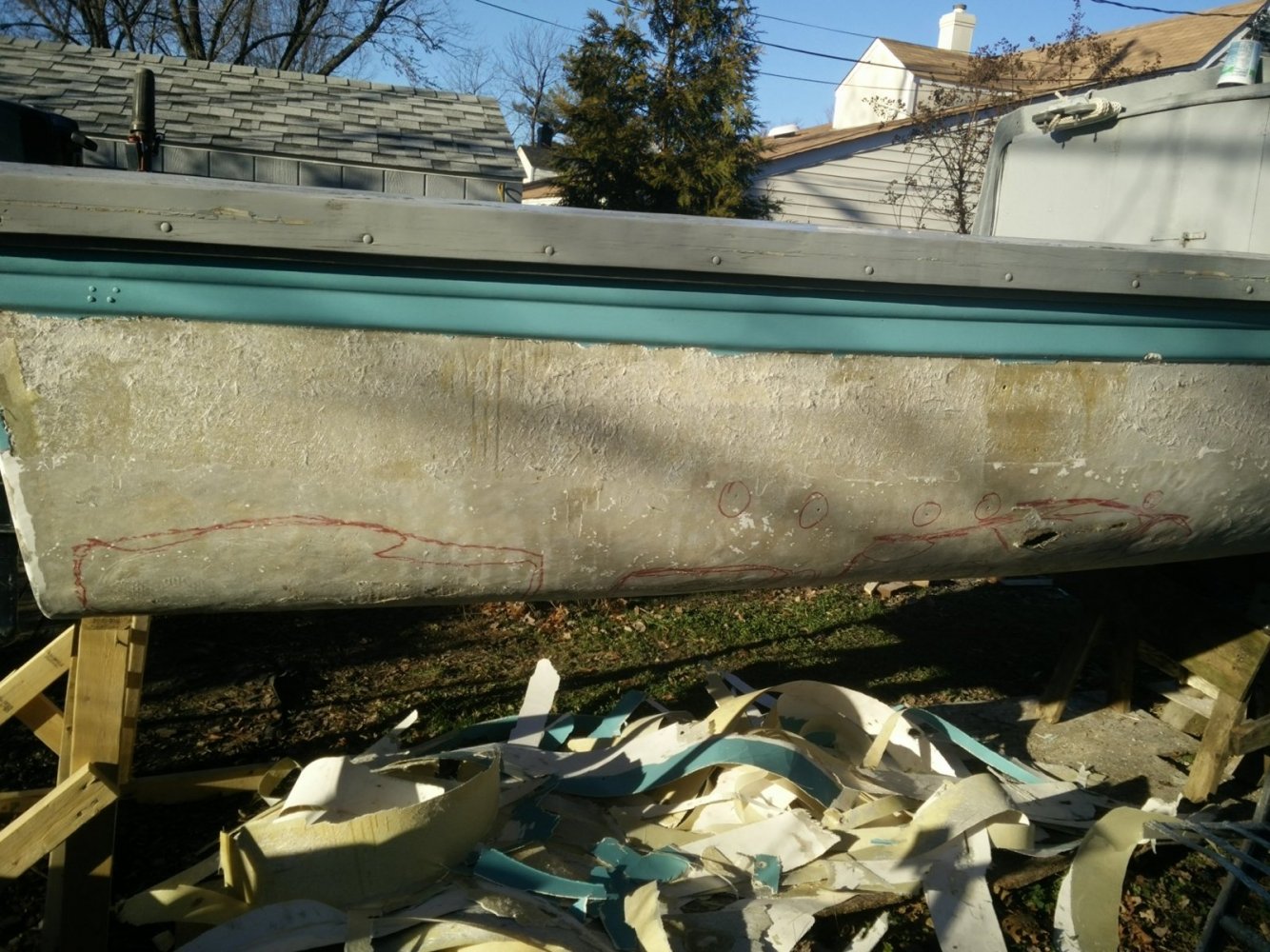 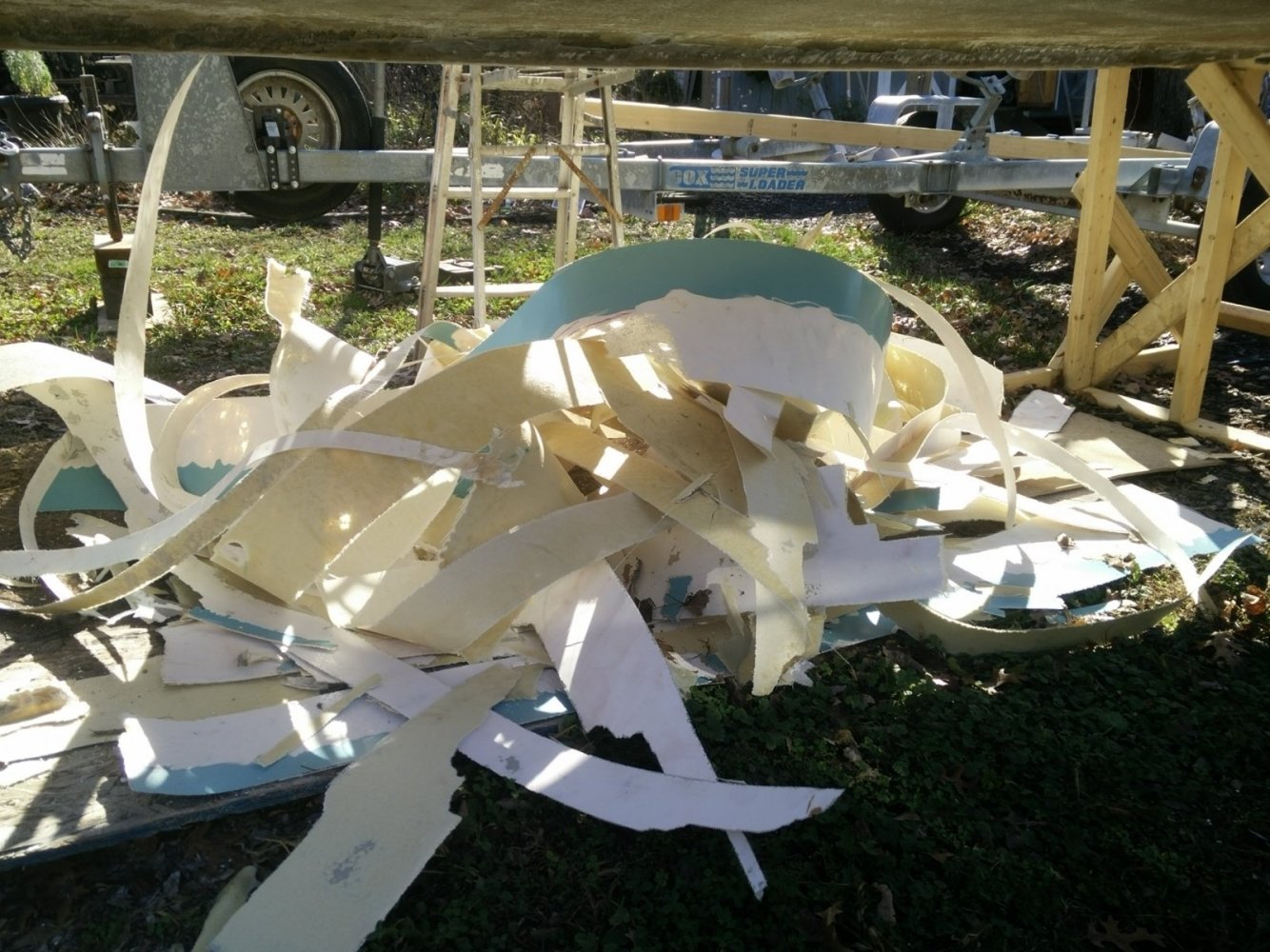 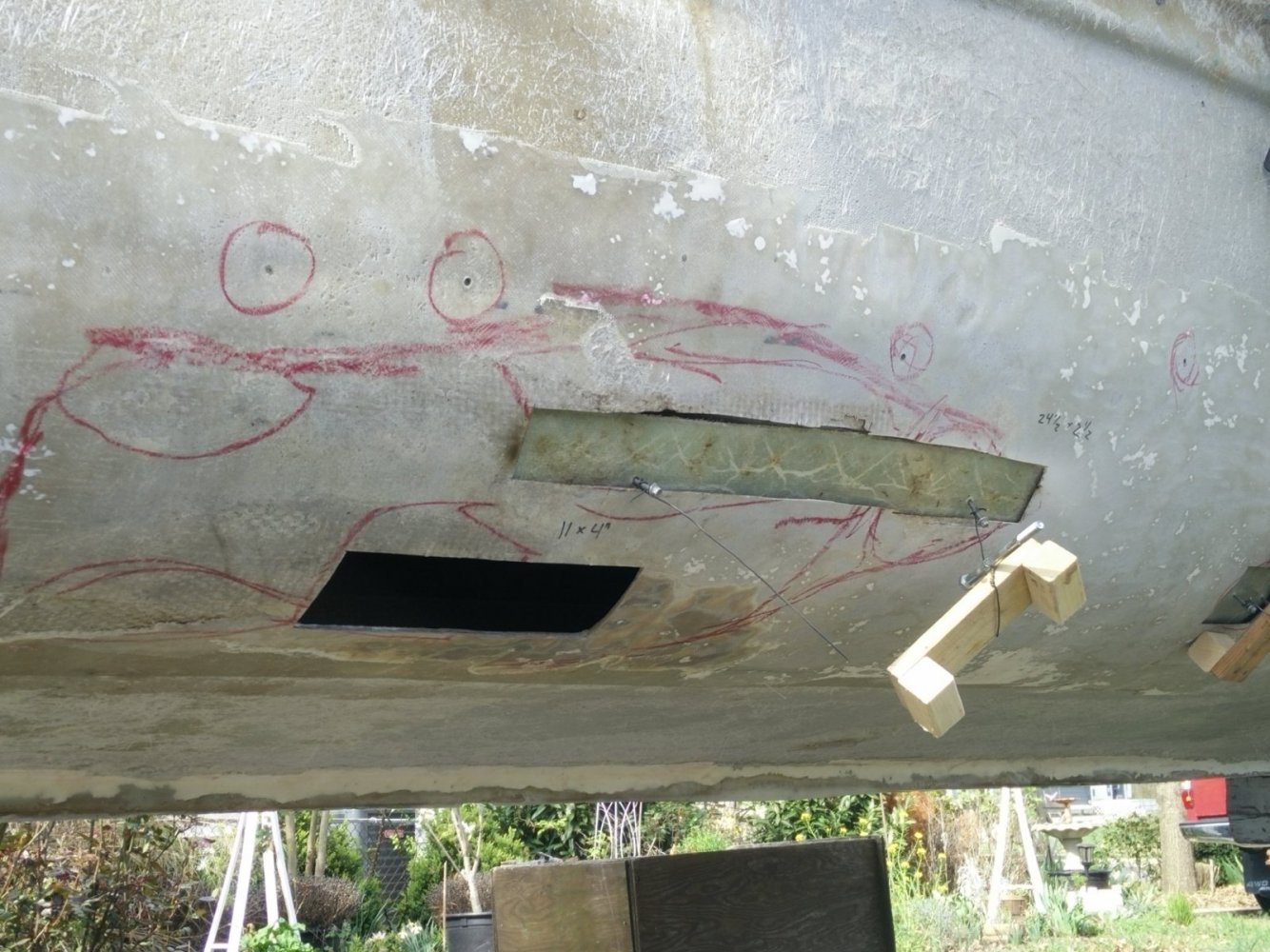