Saturdayâ€™s fishing excursion began at 4:30am with a juvenile bluefish trip, and ended at 4am Sunday, after landing close to 800 pounds of striped bass. Quite the chock full Saturday!

I will admit that I was not thrilled when my alarm went off Saturday morning. I never mind getting up to go fishing, but we were targeting small bluefish-not slob bass. But devoting a morning to catching small blues will be well worth having prime giant tuna bait this fall. Iâ€™m happy to say that things worked out great, and we loaded the bait pen up with 20 bluefish between 6 â€“ 18 inches. Awesome tuna bait.

After cleaning the boat, making an eel and worm run, and grabbing a coffee, I met Sean, Bob and Pat at the Sandwich Marina for some striper fishing. I had high hopes for the evening. The bass have been around in force, and I knew some folks landed some nice ones earlier in the day. On top of that it was a beautiful evening, with clear skies and light winds at the marina.

Unfortunately those light winds kicked up a bit once we got on the water. A very refreshing 10 knot breeze from the east made for some sloppy trolling conditions at Scorton Ledge-the first spot we hit. We got a little wet, but we trudged through the slop until we marked a ton of bass holding just off the Ledge. They were stacked up!

I resisted telling the guys about the find until we had a rod bent over. Luckily these fish were in the feeding mood. We picked away on small keepers and bluefish for a bit, until the port side rod doubled over. Big fish!

Pat was the first on scene and did a nice job bringing this big boy to the boat. At one point I was more concerned about losing Pat than the fish! We were all doing a precious little dance around the boat, trying to keep our balance in the choppy conditions.

After a nice fight, Pat got his fish within range and I brought her aboard. A beautiful 25 pounder, very nice start to the night. A couple passes later and Bob would match his eldest son with a 25 pounder of his own. Sean boated a couple small keepers, apparently saving his big fish for later in the trip.

All these pre-sunset bass bit a 24 inch red tube and worm. Pretty typical for the Ledge.

Once the sun set we moved east, hoping to find piles of bass to pitch eels to. We trudged and searched through 20 feet of water-nothing. I moved out to 30 feet-nothing. 40 feet produced not a single mark, 50 and 60 feet were also dead. In many cases I would feel a little pessimistic about not marking anything in these areas, however what happened during the full moon last September was still fresh in my mind. If it happened again on this trip, I thought to myself, then these guys are in for a real treat.

And thatâ€™s exactly what occurred! The wind backed way off, the seas flattened right out, and we found bass in 10-15 feet of water-and a TON of them.

From there on out it was a consistent diet of doubles and triples, line peeling drag runs, and big bass hitting the decks. All three guys landed the biggest bass of their lives. Pat had the lunker of the night, weighing in at 37.5 pounds. Both Bob and Sean were not far behind, with multiple fish caught in the 30 pound range.

I somehow managed to take some video footage of the events without dropping my phone in the drink. I love hearing those drags scream, Iâ€™ll surely be watching these videos throughout this winter!

The full moon and flat calm seas made it possible to watch the big bass in the moonlight. On numerous occasions we had two or three 20-30 pounders follow hooked bass right to the boat. These fish were not at all spooked by our headlamps, and could not of cared less about the boat. One bass even slammed an eel that had slid up Seanâ€™s line as he battled a fish!

Every once in a while the stripers would come up and annihilate something off the surface. I have no idea what they were feeding on last night, but they were super aggressive. The bass literally paved the bottom, with small patches of bait here and there on the sonar. If we lost track of the fish, all we had to do was cruise a few hundred yards or so in any direction, and we would quickly stumble across another large mass of them.

We found the bass at 9pm and were headed back to the docks with sore arms before midnight. In less than three hours of pitching eels we had caught 31 keepers between 10 and 37.5 pounds! Unreal!

The night fishing on Cape Cod Bay does not get better than this! This same bite occurred during this same week last year. Usually the bass push offshore during the night, but for some reason every so often this pattern reverses, and they push up incredibly close to shore. When this happens, the best fishing of the year ensues.

Who knows how long the bass will remain in this pattern. It could be for weeks, or just a matter of days. Either way, if you have a boat then right now is the time to get out there-Iâ€™m talking tonight people! Or of course, you can always give me a call.

If you do head out, still expect to do some searching around. The area we fished last night was absolutely loaded with big bass, however it all happened within a one quarter mile stretch of beach. We searched over 10 miles of water to find this area.

So in conclusion, this is as good as it gets on Cape Cod Bay. Right now is the time to go. Good luck and go get â€˜em! 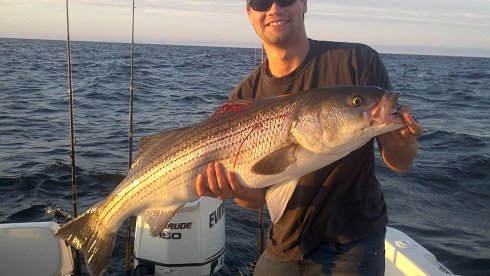 Thanks for the Report ryan..looks like you guys are having quite the summer