Ever hear of this knot

Anyone ever hear of this knot?

It's a great knot, I've been using it for years. Learned it on the EXCEL and it has been 100% for me.

Looks like a good knot for braid to swivel connection.

It holds OK as I try it out at my desk. Easy to learn and to tie.

What is the more original name of the knot, not the extempore name that Mr. Collins uses in the video?

Two years ago, I wanted to respool all my marlin rigs with super braid. I bought eight 1500 yard spools of 130. Trolling super braid is a nightmare so I wanted to use 100 yard mono leaders and needed a knot so it would go through the guides. Upon attempting to test mono to super braid knots, I discovered none of the super braid i bought was 130; it all broke around 70 to 75 lbs.
I got into a pissing contest with the seller, but eventually took the charge off my charge card. I offered to ship the crap back, but the seller refused to pay shipping.
I got real 130 lb super braid from another source, but still haven't found a knot that comes close to even 95% break strength. The braid always cuts through the mono.
If I hadn't tested the first braid for knot strength, I wouldn't have known it was way overrated.

What this source calls a Palomar is a different knot. 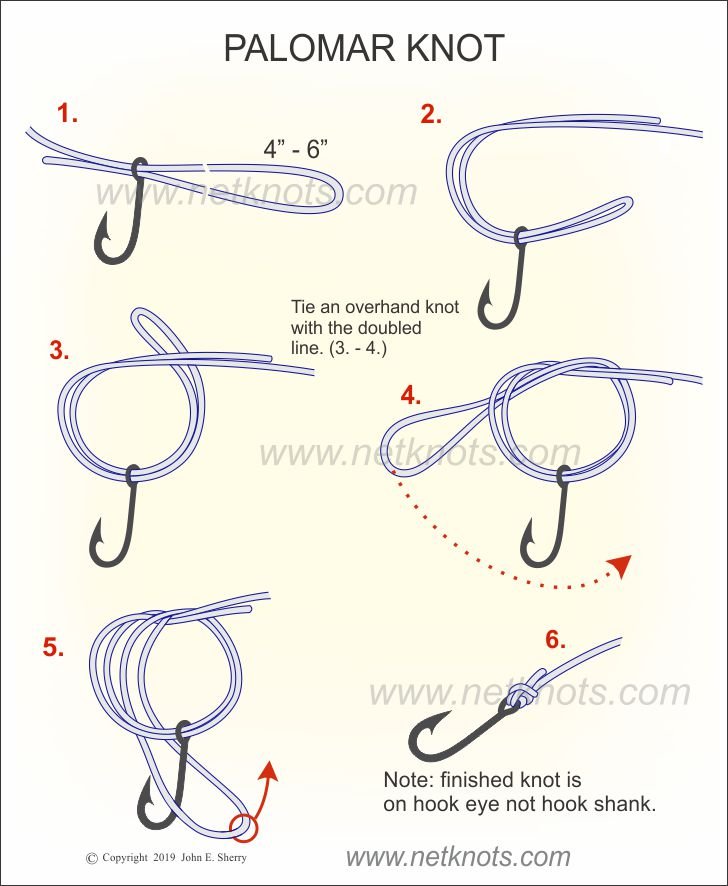 Yes you are correct that the Palomar is illustrated to be tied differently, but you can tie the same knot in a different manner, and this Springer knot looks a lot like a Palomar when tied. But maybe slightly different.

That's the Palomer knot I was taught decades ago. Mono is easy,braid more patience.
J

As much as I like the palomer knot this "other" knot lays down better/smoother and is more compact.I really like the looks of it.I had to make sure the line was laying correctly without any line crossover before cinching it down.

I don't know of any other name for the Springer knot. Definitely not a Palomar, and in my view, far superior to a Palomar. Listen to Captain Collins, he is not one to recommend anything that isn't proven.

Here's a new Palomar heartbreak. So many failed Palomar knots:

This "Springer" knot is almost a Uni-knot, but looped twice, not once, through the hook eye.

I lost some confidence in the Uni many years ago when with the recommended five wraps around the loop it slipped on some brand new, very slick, mono. I see now that one source recommends six wraps for the Uni.

John Collins only calls for two wraps around the two loops with this knot.

The knot does offer the advantage of what Clifford Ashley would call a "double bearing" (two loops through the hook eye), distributing friction and strain of the two parts around the metal.

The number of wraps will depend on the thickness of the line you are using. If you are using light mono (20lb or less) I'd go with 6 or 7 wraps. In braid I usually do about 7 for 30lb or less.

You also have to be sure that the knot seats correctly. If you are not careful the turns won't stack correctly and can slip or cut each other.

I'm definitely going to give this knot a try. It looks like a great option for tying on live bait hooks with 50lb+. I'd have to do some testing before i tried it in lighter line.

All I use is the springer knot. have not a had a failure and it pulls extremely well on the tester.
P

Basil said:
It's a great knot, I've been using it for years. Learned it on the EXCEL and it has been 100% for me.
Click to expand...

Quite the endorsement there!

Has anyone tried this knot with 80lb flouro or heavier?

Ive been using a Palomar but it’s kind of iffy cinching it down.

Basil said:
It's a great knot, I've been using it for years. Learned it on the EXCEL and it has been 100% for me.
Click to expand...

Basil would you prefer this in holding power over a crimp on 100+lb fluorocarbon?? Curious as I’d like to try it for presentation purposes; but I’m not willing if I lose strength.

FWIW I tied a few of these knots using 80 lb Triple Fish flouro. The first one I cinched up dry and it tightened up neatly. The 2nd and 3rd I used saliva and it felt smoother but they all looked the same. Nice, neat and compact. I took a double wrap around my gloved hand and put a lot of pressure on it and there was no slippage. I'm going with this knot on my flouro and swivel connections this season.
You must log in or register to reply here.
Share:
Facebook Twitter Reddit Pinterest Tumblr WhatsApp Email Share Link