I recently sold my downeast boat, ELIZABETH, to Captain Mark who renamed it, DELIVERANCE. I was along during his maiden voyage for tuna to the Hudson Canyon with Bob, Steve, Kevin and Tom. Conditions were perfect and the area was obvious with 50 boats already trolling. We moved out of the fleet and found a single, fat bigeye just before dark. It was a nice fish and fought hard. After thirty-five minutes, Captain Mark, darted it. We continued trolling for another half hour with no other results. We setup for dirft chunking and after an hour while Steve was free lining a live squid, he was hit almost immediately by an unknown large fish. Steve fought the fish around the boat and we had to clear the lines for this big boy. Feelings were high that we had another bigeye. After thirty minutes, a large swordfish showed up in the lights. Unfortunately, we went "light for the bite" on the leader and the bill chaffed the leader real bad. With the final lift before the dart, the line popped. A futile attempt was made to harpoon the fish while it realized it was free. We missed by inches and it swam away to fight again. Very slow for the rest of the night. We were eager to begin trolling. With the sun rising, we dropped the spread in the water. Five minutes later, five lines exploded to the crashing of a wolf pack of bigeyes fifteen feet off the stern. Within seconds, one line snapped with a loud crack after being tangled. The other four were boated in forty minutes. Final tally was 5/6 on quality bigeyes. On the way back to the barn, we could not wipe the smile off Captain Mark's face. Way to break in the new boat. Seems the name change didn't change the boat's mojo.

Mark (center) with Tom and Steve. 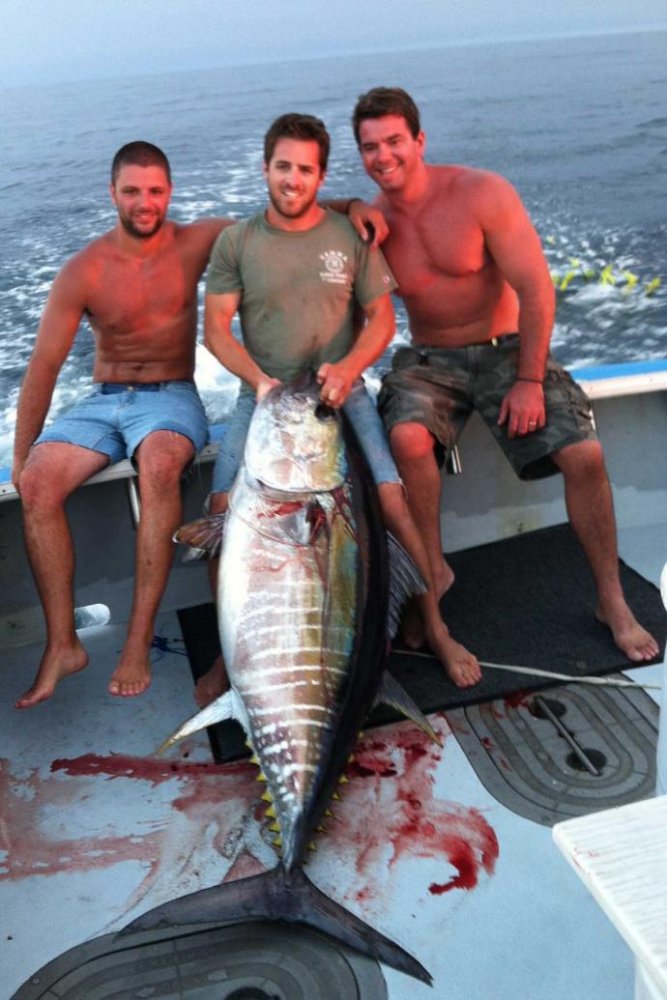 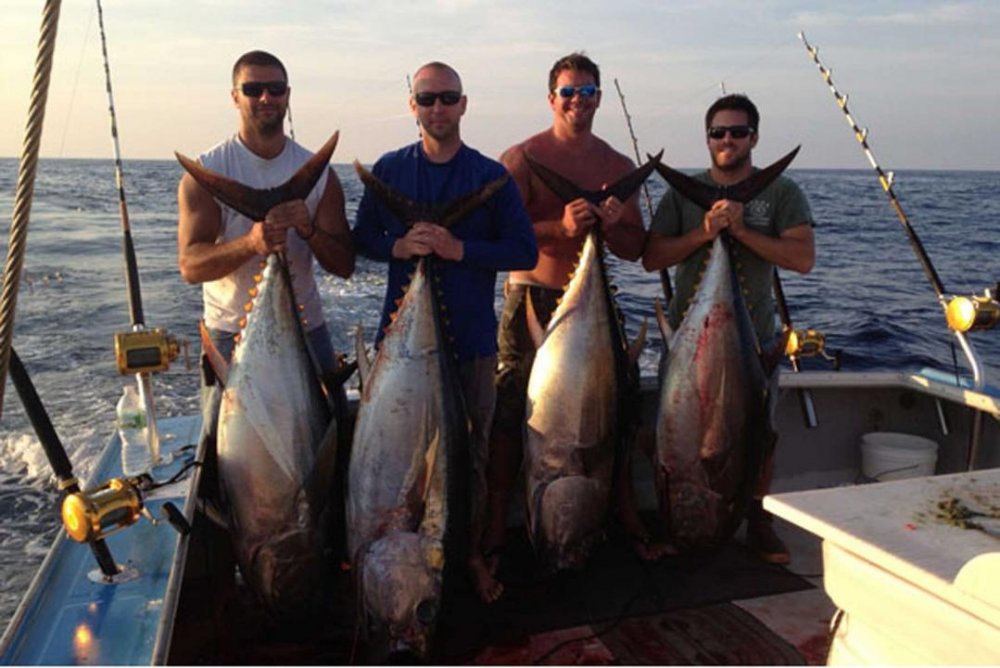 Very nice! Perfect way to break the boat in.
C

great trip. and that's a nice boat. congrats on the sale, and congrats to the new capt.

Congrats saw you out their fighting the fish as we passed by in the 38 Holland. Congrats again and good luck with the boat

Thanks to all. It was a really good time in the Hudson this past weekend. We all needed a good shot at some real bruisers in our area after listening to what has been going on down south. I hope the fish keep coming up. We need a decent bite of YFT in the area to take up some of the slack time out there.

Sure was strange being a passenger on my boat after nineteen years. The ELIZABETH sure earned her keep many times over catching crab and tuna when I owned her. I know Mark will enjoy her as much as I have. If nothing else, he's off to a good start and the boat is ship shape and ready to get back out there. As for me, I'm enjoying the time off, it's truly amazing how much work goes into the preparation of a boat to get it out on a trip and how much more work there is when you get back. Fortunately, Mark has been bit by the tuna bug and he is nonstop when it comes to fishing. Perhaps I will get another invite to go fish with him.
P