So who has any fishing truths to put down here...

Here is one that came to mind when I did a tuna trip... I went out and got a new big Bomar style fishbox. Ran down the canyons and came up empty handed. First truth, that first time you buy the extra cooler, you wont need it.

Today, got my new cod permit... couldn't find the amount of cod to fill the permit...ha...
H

Put a boom and winch on the boat for the big boys then spent 6 days east, nothing but sharks. I should make it so I can hide the boom down below so the gods can't see it.

In Shinnecock Bay blackback flounder are like Islamic terrorists. Life is good until the seals show up.

Frigate said:
In Shinnecock Bay blackback flounder are like Islamic terrorists. Life is good until the seals show up.
Click to expand...

The same is happening in the bay where iam...the seals are everywhere..now....gunna start seal watching trips
S

Over all the years of fishing, we have it figured out now. Every season is different!

Yup, been there done that...
B

the bite of whatever your fishing for is unreal when bait is hard to find and the livewell is hardly full. When the livewelll is full the bite is not......

every time one of my boats hits the hard, we get a tremendous inshore tuna run

I am always one day early/late!

I've always ound it a truism that if I need a striper for a guest, all we will get is bluefish. If I need bluefish for sharking, I will only get stripers.

The blitz just started at the spot I just left :shock::shock:

Run the the partyboat Miss Barnegat Light for night blues and the fleet can be crushing them all week long but like clockwork Saturday night they vanish just in time for the big weekend crowds.

You can't catch fish at the dock.

If I don't bring ice, I catch fish. If I load the boat to the gunnels in ice, I end up dumping it.

It happen to me blackfishing the other day....all morning long nothing.....i left and it was game on...kill me
J

I got let in on a secret spot this fall fishing up some taug. The commercial season was open and everyone was all over the place trying to fill there quotas. Most of the guys were making 6-8 mile runs out of the bay in search of the critters as was I. When a friend of mine brought me to the most un likely spot inside the bay no more than 1-1/2 miles from the dock. This spot is less than 1/4 mile from shore, completly sheltered from the prevailing winds, and is just inshore of a reef so no matter what the swell is, it remains very calm. He made me swear that I would not tell anyone about it. We sat there everyday for two weeks and hauled up fat ass white chins one after another. It was incredible. The best taugin that I had ever done. we would each have our ten keepers within an hour usually, and that was after we threw another ten smaller keepers back that were in the livewell. Anyways, some of my very close friends that Have always told me about there secret spots were getting very upset that I was coming back with overflowing coolers every trip, and wasnt talkin. So They finnally called me out and basically said that It was f#$ked up that they always let me in on there sweet spots and they felt rather betrayed by the fact that I was holding out on them. It made me feel bad, so I spilled the beans. The next day I went back, I kept the same crab on my hook for an hour. There wasnt even a choggie to be cought. I got completely skunked for a week or so at that spot, then I gave up............ Bad fishing ju-ju. I should have never told. I was makin at least 200 bucks a day there every day and back at the dock before 10am. Only burnin 2 gallons at most. wtf

Man was it cold on sat 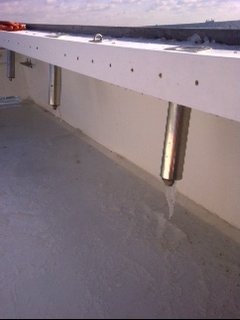