Always felt the same way about the freeze thaw cycle after owning wet cored boats in the past. Nice to hear at least one person agree.

Travis suggested separating the core pieces which was a great idea and superior to the "fill the kerf" method mentioned here IMO.

The whole filet at the edge of core material idea was new to me. Not sure I agree entirely but it would make glassing over a 3/4" step easier.

Fillets are mad easy to make, just take your trimmings from your layout or after you're all done and just zip them with a band saw at the proper angle, bed them and glass over them.

I think I saw a movie entitled "fill the kerf" back in college...
R

F/V First Team said:
Fillets are mad easy to make, just take your trimmings from your layout or after you're all done and just zip them with a band saw at the proper angle, bed them and glass over them.

I think I saw a movie entitled "fill the kerf" back in college...
Click to expand...

F/V First Team said:
Fillets are mad easy to make, just take your trimmings from your layout or after you're all done and just zip them with a band saw at the proper angle, bed them and glass over them.

I think I saw a movie entitled "fill the kerf" back in college...
Click to expand...

Seems like a finger and some hull and deck might do to and it could all be done hot, no? Dreaming of uses for that goop daily...

Gleaming the cube? Probably not.

Could be done with hull and deck, but if you're doing a super structure or some other large project that would take a lot of time, not to mention a lot of material. You could just kiss it with a grinder too, but then again you have debris to manage and clean up to have everything as nice and neat as you can when you glass over it.

Travis. Still reading up on core bonding adhesives. Besides core bond what others do you reccomend? I know you said csm but is there anything else ? Will core bond be ok for non foam applications?

There is core-bond, poly-bond, nida-bond, james bon... no wait, that's not right. There are many different bonding materials out there, some use BPO paste, others use MEK-P as catalyst. Even smushing down into some soggy mat works pretty swell.

I've never used the Nida-bond so I can't say with any validity how it works.

Core-bond uses BPO paste and is real purdy depending on which color of paste you choose (blue works pretty good, the green sometimes is too pigmented so it shows through on thin light-colored gelcoats), it is somewhat thicker being more akin to super creamy peanut butter when you trowel it on your surface. Pretty good work time, you can mix up a five gallon pail and go to town coring a top with a 3 man crew. One to run the gun to wet out the core material and two to trowel and apply the core. Big heavy rollers are your friend with this material, don't worry about filleting the edges or pockets that need filling, you can just slide your blade over it and be done. Sands easily for surface prep. Smells not terrible.

Poly-bond uses MEK-P and is either an off white color (if you use clear MEK-P) or pink if you use the red MEK-P. More like mayonnaise in consistency and you can tune up the cure time just like you would with resin (just add more catalyst, laughing manically while playing chemist is totally up to you). Same deal as before, heavy rollers to set your core material do wonders for the project. The little spits and spats that come up as you do the edges of your core and deposit them on the scrim sides can just be rolled out, no need to drag the blade across the surface. Mixes really nicely with the resin, since they both use the same catalyst - core-bond seems to slip and slide around when using this technique. Building up ramps and fillets for your core doesn't always work out for big areas and thick cores, due to the fluid nature of Poly-bond but it can be done. Sands pretty good, but given the ease of just rolling it out on the material you shouldn't find yourself in a position where you need to sand. Smells like every other MEK-P catalyzed product, mmmm; styrene.

When de-coring areas, the pro-bond trips the de-coring tool up more often than poly-bond. Can slap you right out of the hole and across the surface of the exterior forcing you to do some gelcoat repair.

I think poly-bond gets a little better hold on the core material only because it cross-links better with the resin - same catalyst after all. You can usually pop the entire plug out with core-bond, you have to worry the pieces out with poly-bond.

Both taste horrible and the dust makes you sneeze.

Additionally, since it's MEK-P and you're just guessing how much catalyst to use it's easier to whip up another batch of poly-bond to complete the job than it is with core-bond. BPO likes proper mixtures otherwise you have some fancy (and rather hot) boat art when it kicks off while trying to use it.

Thanks for that. Ill read up on those. What heavy rollers would you use? Just as an example, something you can really lean on to get the job done. Sometimes it helps to remember that scene in Who Framed Roger Rabbit, especially in the corners near a radius.

Indeed a "good read" on core materials but my experience makes me disagree with them that freeze/thaw cycles have no effect on delamination enlargement. Quite the contrary, if I discover a small delam area on my deck in the fall, and don't handle it. it is always larger in the spring.

As a '71 Bruno owner, I have had some experience with core delams. I have owned this boat for 30 years, I have never had a delam on the hull itself or house overhead but have had a dozen+ on the foredeck, transom deck, washboards, & trunk cabin. All have been found by sounding and repaired without cutting up the boat.

Knowing that this is a problem with these boats, I spend an hour sounding the entire boat in the fall when I put her away. If I find a spot, I map it, then drill 5/32" holes 2" on center from the inside throughout the area passing through the core material but not the outer skin. If water runs out (seldom) I set up my shop vac and run it while I am cleaning & covering up the boat. I may install a clipon worklight w/ a 40-60w bulb and leave it on over the winter.

In the spring I inject the holes with microballoon thickened epoxy working across the area and its dozens of holes plugging the injection hole with a tapping screw when the resin starts to come out another hole then moving to that hole and so on. After cured, I come back and remove the screws, fill the holes, and done, stronger than new.
Last edited: Oct 1, 2013

So for those of us that are in the market for an older boat; should we just consider the solid glass hulls? Seems risky to have 36 ft of problems and how can you trust surveyors you don't know to find the moisture problem.

Kodiakan said:
So for those of us that are in the market for an older boat; should we just consider the solid glass hulls? Seems risky to have 36 ft of problems and how can you trust surveyors you don't know to find the moisture problem.
Click to expand...


Hard to say... The cored boats have some advantages too weight, strength, insulation, no sweat, quite...
The moisture meters can be misleading for sure. I think I just got a good hull and house but bad decks and trunk.

Weight? Unless you're leaving out much of the laminate, you are actually ADDING weight, core weighs, bedding material weighs and resin certainly weighs.

Strength? You must mean stiffness.

Insulation yeah, more dead space between the skins, how much? Debatable.

I'd steer clear of a cored hull personally.

Not that my opinion means sh!t, but here it is anyway. My jc35 is cored. Not saturated thankgod. The only real differance i have notice between mine and another friends jc35 solid glass is the acoustics. Everything else Travis said, im in favor to go along with.

If i buy another boat, i want solid glass and if the acoustics arent to my liking i will just add some drapes.

Take a gander at this ol' girl

Notice that the exposed balsa is gone but look at the kerf. How does that look? Had this top not been modified to be the front of a tack shed the core probably would still be top notch.

Anyone care to guess what boat this top is from? 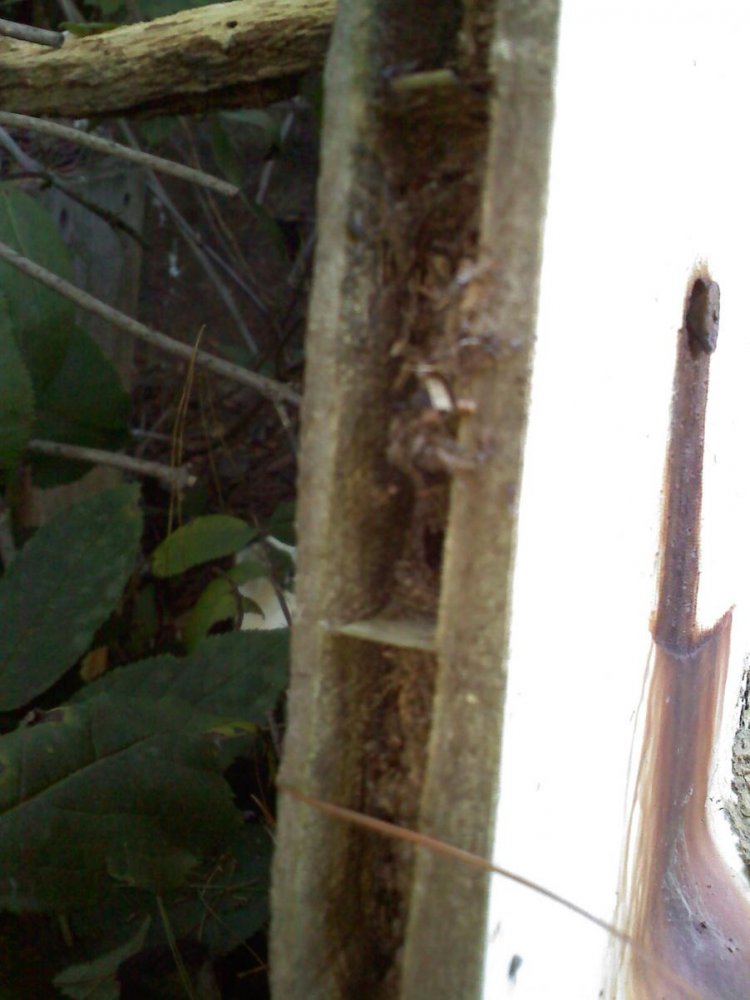 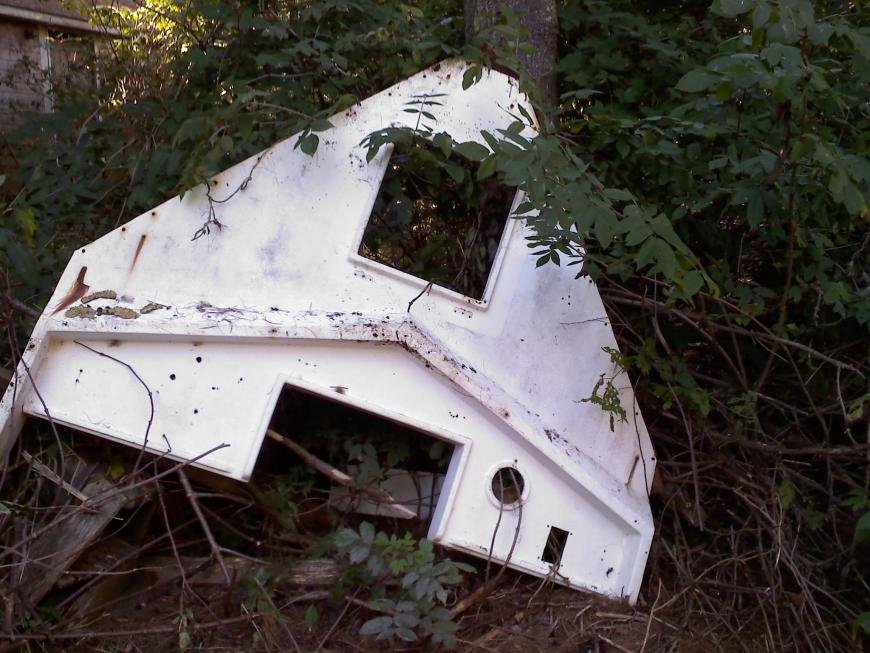 A few years back we rebuilt a foam cored BHM hull from the early 90's. The Boat had been sitting out of the water for a couple of years after the owner passed away. The surveyor checked the hull and found no problems. But there were major issues due to improper installation of the sea valve and the quarter guards. the areas around the penetrations weren't sealed or removed for a solid glass pad. Done properly, a foam core hull has the benefits that were mentioned, but a lot depends on who and what has been done to the boat

So I'm planning my core out on my boat. Specifically that wash rails and the stern. I am going to pre glass these sections so that everywhere there is a rod holders etc. There is no core in sight, just solid glass so I am not dealing with decoring etc. Now with all the fillets, core bonding, damn kerfs etc. Why can't I just make this whole top solid glass and forget all this ? Right now I have 1/2" balsa.if I went solid glass how thick would I go? Oh ya and before you lay core bond or poly bond down to "old " glass you definitely need to lay at least 1 layer of mat down before you lay the core bond down. And you have to time the curing time of the core bond to the cure time of the resin primed balsa..