Anyone see this show on TLC??

Stumbled on it flipping channels, can you say battle fishing???

They were herring fishing in Sitka Alaska.

Maybe SteveAK can chime in.

I've heard the name before but don't know anything about the guy. Looks like your typical "screamer skipper" to me with a inexperienced crew . That happens to a lot of "screamers" they can't keep a crew so they drag family members in to crew. Its always hit me kinda funny when i hear guys talk about another fisherman and say "that guy is a aggressive fisherman" well all i've ever seen is the guy is a asshole, no respect for another persons gear or where another person is fishing its like they think that the whole area is only for them, you know the me only attidude.
That Sitka herring fishery is a big deal for the guys who have the permits, permits go for around 600K if you can find one to buy. Some boats will fish in 'co-ops" so 4 or 5 boats work together and when the plane finds the fish one of the boats will go and make the set while the others just run defense by setting their seines out straight so other boats can't go in and make the set. Here's a picture of the record set made in Sitka a couple of years ago, it think it was around 1500 tons, it was a million dollar set. 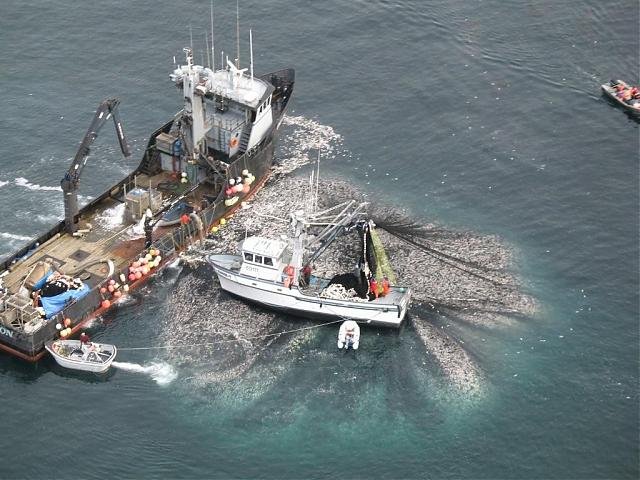 I did get that feel from the guy while watching the show last night.

The first episode showing the Sitka herring fishery was intense, I love watching those nice boats fishing. I'm looking forward to the future episodes where they show the Andersons fishing for salmon in Chignik. I've heard Discovery Channel is thinking of doing a show in the area that I fish (Cook Inlet). I personally think the Bristol Bay salmon fishery would make the best show; it could easily rival Deadliest Catch with the amount of drama and competition.

I enjoyed the show.

Being a father of 2 daughters, I like seeing women in non traditional jobs.