By ROBERT TOMSHO
NEW HARBOR, Maine -- In the century or so since Maine lobstermen began racing their boats, there have seldom been rivals quite like Galen Alley and Stevie Johnson, who went head-to-head here one recent Sunday afternoon.

On a racing circuit where $500 in cash and a barrel of lobster-bait herring is considered a big prize, neither man is a working fisherman. But then, no lobsterman would probably ever try to haul traps from their decidedly unconventional boats.

Stevie Johnson's boat, "Sunbird," features a Pontiac convertible.
.Mr. Alley, the circuit's record holder for speed -- 64.5 miles per hour, set earlier this summer -- competes in a souped-up fiberglass clone of his great-grandfather's boat. Mr. Johnson has been trying to beat him from behind the steering wheel of a blue Pontiac convertible attached to the deck of a sawed-off cabin cruiser.

Lately, they have been among lobster-boat racing's biggest draws, "Galen with speed and Stevie with something strange," says Jon Johansen, president of the Maine Lobster Boat Racing Association. The association held races in nine coastal towns this summer, with competitions attracting up to around 500 people on shore and others on spectator boats. In the recent contest here, organizers offered a special one-time prize of $1,000 to anyone who could beat Mr. Alley's speed record, an offer open to Mr. Alley himself.

In the old days, when Maine lobstermen sailed schooners, races were usually casual affairs involving fellow townsmen trying to beat each other back to a harbor after a day of fishing. Beginning in the 1920s, individual towns along the coast began holding more organized races. Eventually, working lobstermen found themselves racing against vessels manned by boat builders, seafood merchants, auto mechanics and retired teachers.

During the 1980s, the big winners included the Young brothers, Colby, Arvid and Arvin. They raced in a craft known as the Sopwith Camel, named after the famed World War I British biplane, one of which shot down German flying ace Manfred von Richthofen.

Herr von Richthofen was better known as the Red Baron -- which was also the name of the 32-foot craft owned by boat builder Glenn Holland, the Youngs' most relentless competitor. His vessel is still so fondly remembered in these parts that one Maine toy maker sells wooden models of it. Weary of trying to keep up with competitors who were spending $60,000 and more on high-power racing engines, Mr. Holland retired from the circuit in 2000. "Bragging rights are all you get out of it, and pride was getting expensive," he says.

Indeed, no one gets rich racing lobster boats, which on race day compete in various categories based upon their length, engine size and whether they use diesel or gasoline for fuel. Although a few races offer up to $500 for first place in some categories, prizes of $200 or less are more common.


The Foolish Pleasure
.The number of race participants varies from about 50 to as many as 150. Everyone who pays the registration fee, typically $20, gets to take part in "hat drawings" wherein all entrants win some sort freebie donated by local merchants. Drawing prizes range from $100 bills, lobster traps and motor oil to gift certificates for boat-painting services and pizza. Some boat owners pay the entry fee just to take part in the drawings but don't actually compete on the water, although race organizers frown on such behavior.

A lobster buyer by profession, Mr. Alley, 48 years old, of Beals Island, Maine, first tried his hand at racing four years ago with a 30-foot wooden lobster boat once owned by his great grandfather. He outfitted it with a massive racing engine, but things didn't go smoothly.

On the first trial run, a board on the bottom of the old boat sprang loose with such force that it pitched a 13-year-old passenger into the air and overboard. The boy was rescued but the heirloom craft sank. Mr. Alley refloated it, but, unable to keep the rickety boat watertight, he eventually had a fiberglass replica made.

Dubbed Foolish Pleasure, the white craft has a massive dragster-style engine mounted on its deck. At races, its booming growl can often be heard long before the boat comes into view at the starting line. At just over 2,000 pounds, it weighs about a fifth of most other boats its size, although its lightness sometimes causes it to go slightly airborne in choppy water.

A relentlessly competitive sort, Mr. Alley celebrated a runaway victory after crossing the finish line at one race this summer only to find he'd mistakenly just won a competition for female boat captains.

As for Mr. Johnson, lately his rival for the attention of racing fans, Mr. Alley is dismissive. "I can beat him by 15 miles an hour," he says. "He's not even in my class."

CloseGalen Alley's boat "Foolish Pleasure" set the speed record for Maine's lobster boat racing circuit earlier this summerâ€”64.5 miles per hour.
."It would be nice to beat him because he goes like hell," says Mr. Johnson, 54, acknowledging that a breakdown by Mr. Alley is probably the only way he will top him this year. But then, for the barrel-chested boat builder -- who has won many races against others this summer -- showmanship is as important as victory.

He built one lobster boat with a powerful engine from a World War II-era patrol boat and another with pontoon-like stabilizers that also served as beer coolers. Mr. Johnson showed up at one race in a seaplane piloted by a friend. He convinced officials to put on an exhibition race pitting some lobster boats against the plane, which was supposed to stay sea-bound during the race but was disqualified because it left the water.

To make his current boat, Sunbird, Mr. Johnson lopped the top off a 26-foot cabin cruiser, installed a new deck and chained a 1994 Pontiac convertible to the top of it. For races, he controls the boat from the car's front seat.

Powered by a pair of 200-horsepower outboards each equipped with its own gas tank, Sunbird is a showstopper at races. During the competition in New Harbor, Mr. Johnson cruised among the spectator boats between races, waving, honking his horn and hamming it up for countless snapshots.

"Is that a car or what?" someone shouted.

"It's a cah-boat," Mr. Johnson replied, suppressing the "r" in classic New England patois. All the while, his big motors were guzzling gas from the tanks he'd neglected to top off.

When the flag went down beginning the race where he and Mr. Alley were competitors, Sunbird jumped forward. Then one of its fuel-starved motors conked out.

Mr. Alley roared to the finish line ahead of everyone else, although he couldn't beat his own speed record. He plans to modify his boat's drive shaft in the off-season to try to gain speed.

Mr. Johnson has been laying plans of his own for the 2010 season. He recently heard about an old Oscar Mayer Wienermobile that might be had for the right price.

"A friend of mine is working on it," he said 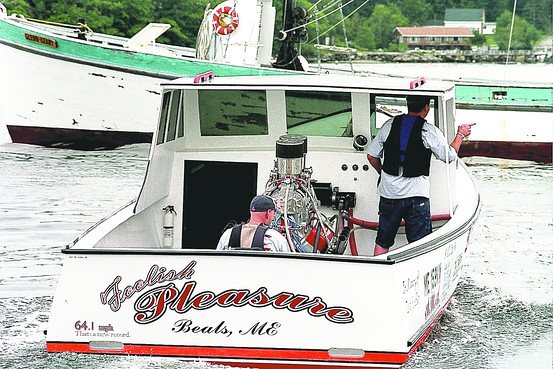 Libby 29, blown gas for power. Did not get to see him run, something broke.

From the same weekend, at the town dock. This pic (for me) pretty much sums up old school vs. new school on downeast working boat design. Yes, they are apples and oranges, but the modern boats are just plain getting bigger, and beamier. A 44 Calvin at the dock, and in the background, to the right, a 32 Holland.