Ahoy there! Since I've just come aboard of this site I wanted to introduce myself and this sweet Downeaster that has been my home since '93. "PATIENCE" is a Webbers Cove 34. She was finished in Lighthouse Point, Florida at Lighthouse Point Marina by owner, John Rhodes in 1968. The first of an intended series of a cruising motoryachts designed for a couple or solo he called it the "Mini Ship 34". This was in reference to her boatdeck atop the salon solving dinghy storage problems. Being the "showboat" for future sales, my vessel was finished in mahogany. The builder's son told me that the cabinet maker that trimmed the interior had his dad pulling his hair out! The radius instead of corners, one piece trims. They ended up with 5,800 hours on this boat. It shows! At the Boatshows they got the same reaction from most everyone, we want More Bunks! Yes the old...."my boat sleeps..."! This boat has a beam of 10'8". It Drinks 6, Feeds 4 and Sleeps 2! He had four more hulls that were finished like tiny trawlers. Two bunks forw'd. Two aft and a conv. dinette. Too many people. Too small a space. I think I got the best deal.
"PATIENCE" is powered with a Perkins 6-354. I moved from Florida to Morehead City, NC. In that trip I burned less than 200 gal.s of diesel. In her forecastle she has a v-bearth. A head with shower, two hanging lockers, three shelved lockers and six drawers. Up two steps to the pilot house. Between the bridgedeck and the benchseat the only "length of the boat taken is about two feet. One step down. The "workdeck" space is the salon and cockpit. Beside a divider for the galley there's nothing built in. The cabinsides come right down with lockers under the side decks. Sedan doors open the salon out to the cockpit on the same level under the same cover. The photo shows the "funnel"(propane locker) and the full run coach top covering the cockpit. The woodwork is now done and the fairing begun. Now to match the awlgrip on the pilot house and fo'c'sl.
As for myself. I grew up on the CT shore of Long Island Sound. Sailing all my life. I've sailed for a living, charters, deliveries, private yachts. I've worked in boatyards. From painting bottoms to rigging. I have done a bit of commercial fishing out of Galilee and Block Island, RI and Stonington, CT. I sailed the longest open ocean passage in the world, Panama to the Marquesas, French Polynesia. I have lived aboard more than I've lived ashore and wouldn't have it any other way. 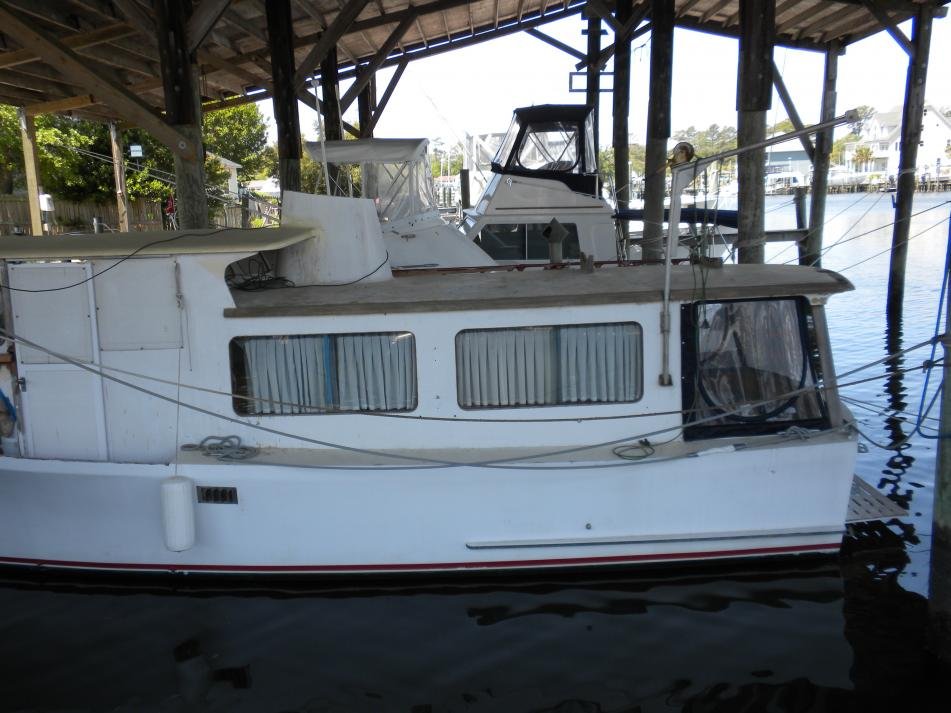 A better shot of her profile. There is a very similar hull to mine in the shed here. It is faired and primed. It has a Ford Lehman 6 cyl diesel with reverse gear not in boat. Asking $5K! 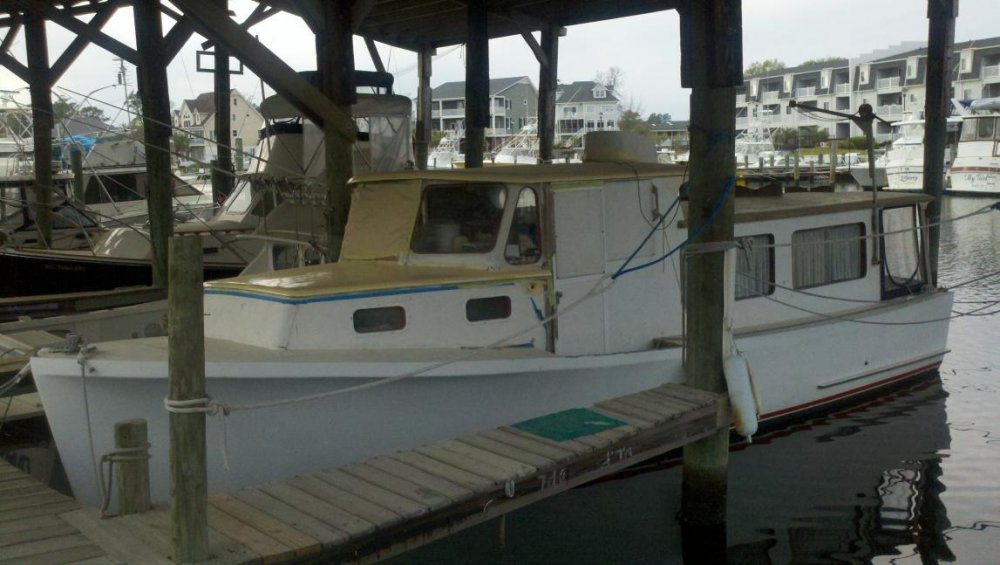 Welcome aboard, Rob. You add more diversity to our already diverse group.

Is the stack functional? Or decorative

That dark hull on the otherside of the 31 Bertram is a beautiful Bruno Stilman. He got that slip when Dick Bruno left it!

The funnel is the propane locker. There's a remote controlled celenoid at the tanks. Its piped direct to the galley and runs under the countertop to the stove. Funny thing, when I bought the boat he had a rusted out RV stove in it that was virtually a bomb!! Since replaced with a rebuilt Shipmate 3 burner with oven/broiler. I also have an old Shipmate "Skippy" coalstove for heat. If I'm not plugged in for Clean electric!