Heading up to zone 10 Sunday with my oldest son. After putting in for 23 years he got picked. Looks like it's gonna be warm. Anyway I'm excited to go, he hasn't hunted since he went to college but seems to be excited also.

How will you be armed -- bolt; lever; slide action?
C

Dont forget a shotgun for some birds once you tag out! Good luck

Where is zone 10? I spend some time up in jackman and its loaded with everything from moose to partridge
M

Thats a trip of a lifetime. I hope he gets one.
F

Downrigga said:
Where is zone 10? I spend some time up in jackman and its loaded with everything from moose to partridge
Click to expand...

So when you get picked how long do you have to tag out? How does that work?
F

you get a zone and a certain week
( mon thru sat), its all in the permit lottery application
you can choose specific zones and weeks you only want to hunt or just take whatever is available when and if your name is drawn
M

Good Luck! A northern Maine moose hunt has to be one of the greatest hunting experiences. 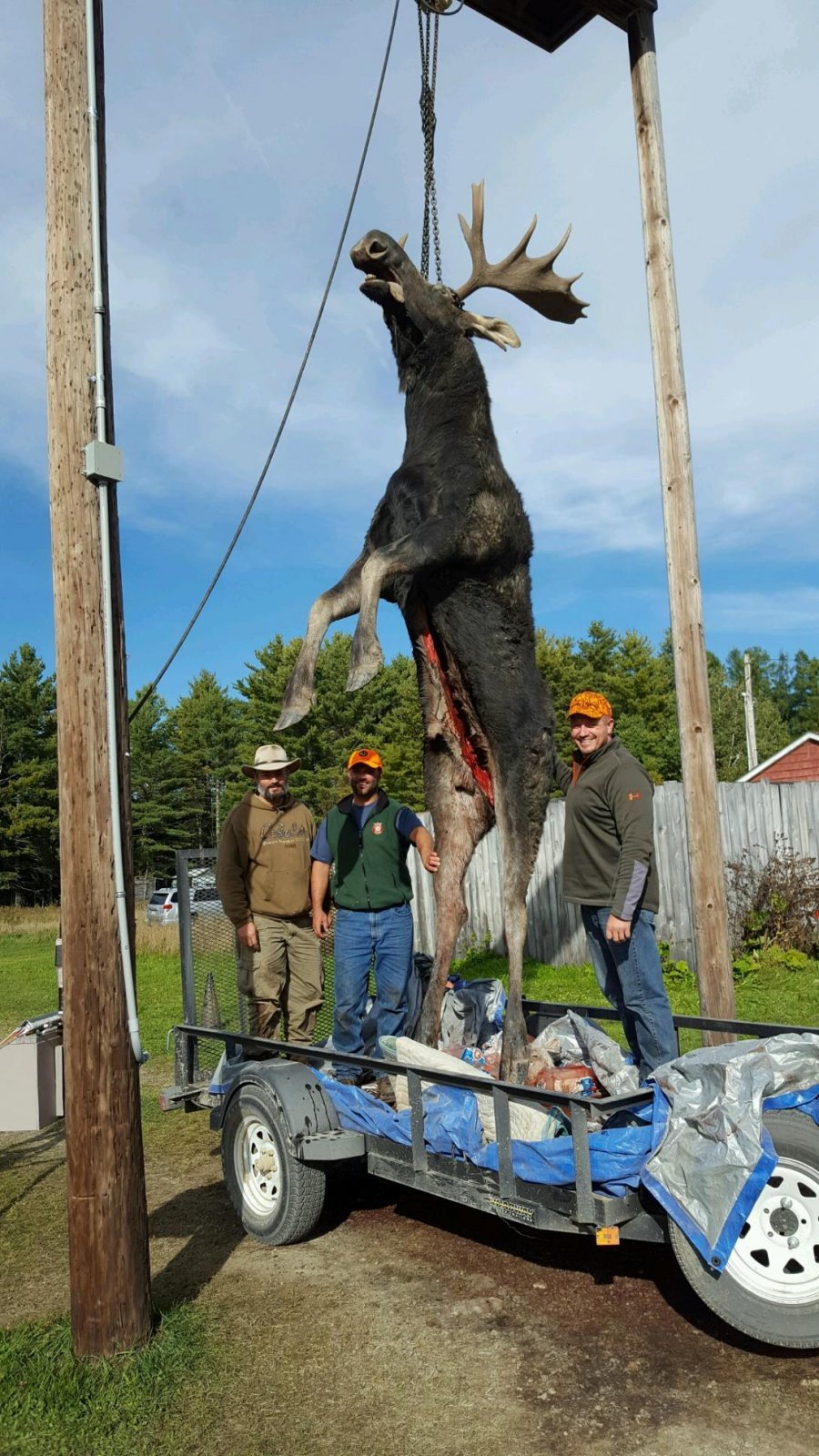 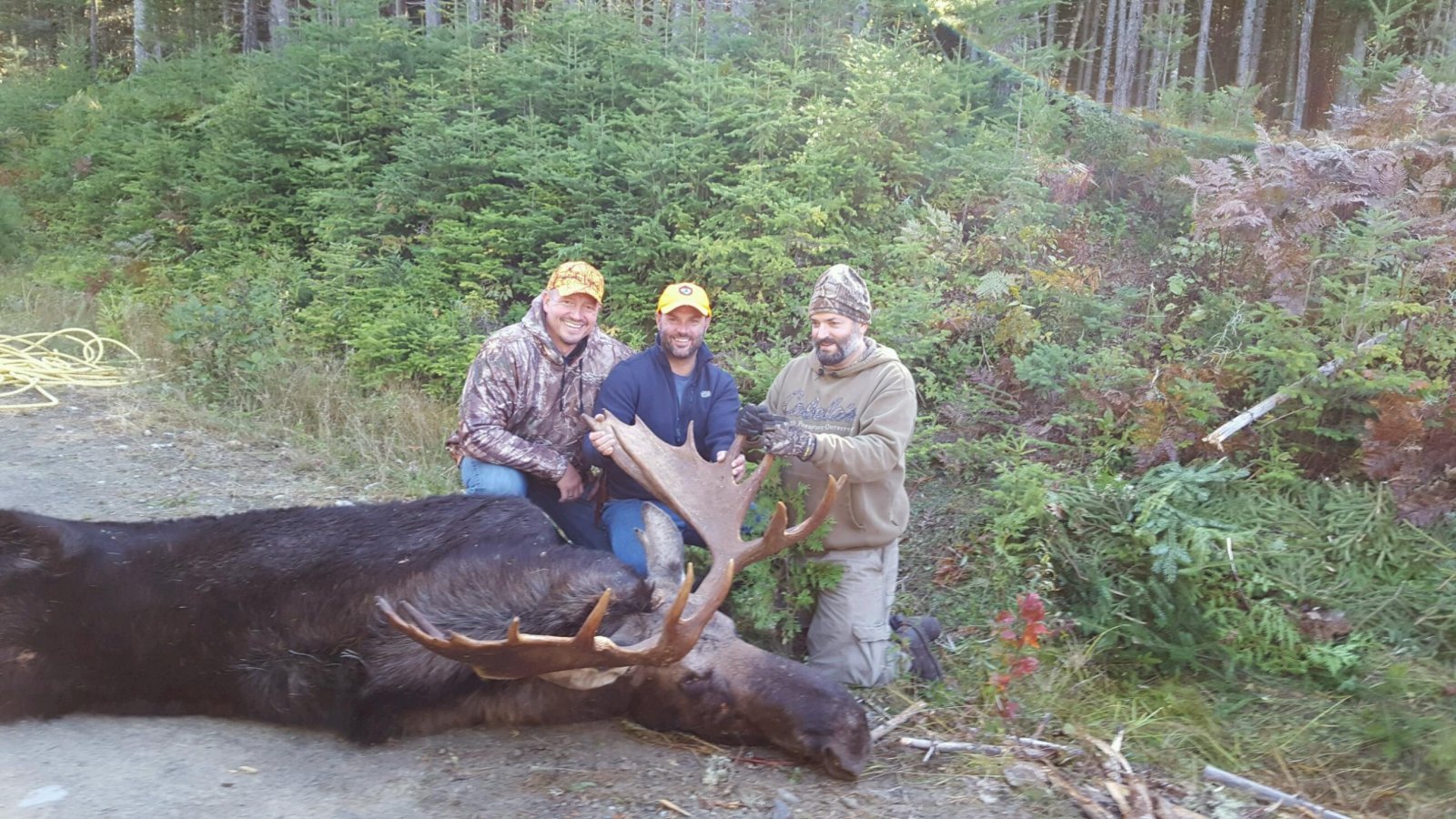 Nice one! Gotta ask, is the center of Maine better for hunting? Or further toward the border? Or is it just plain luck depending on the time, temp, or month?
Last edited: Oct 14, 2021
M

Fishnjess said:
Nice one! Gotta ask, is the center of Maine better for hunting? Or further toward the border? Or is it just plain luck depending on the time, temp, or month?
Click to expand...

This map shows where moose were taken last year:

It can be a little bit misleading, since a lot of hunters still try and get the moose near logging roads. That doesn't mean there aren't higher concentrations in places that aren't as accessible. They say the days of shooting trophy moose from the road are long behind us and you have to get off the beaten path if you want to get a big one. Unit 1, the Allagash, is one of the more prized areas and that's were we got our tag. If I recall it was over 100 miles from a paved road. It took us almost an hour of driving logging roads from Unit 4 where the cabin we rented was up to Unit 1 were we could hunt. We didn't use an outfitter. The guy in the middle with the guide patch is my brother and it was his tag. I was the sub-permittee. We both went to guide school together but I never bothered to take the test.

We had a September hunt during the rut and we called him in. He was just under a thousand pounds. We were somewhere around 600 hundred yards into the woods and it took two of us about 12 hours of work to get him close to the road using my chainsaw winch. We got him within a hundred yards and then the winch crapped out. Luckily a group of old timers on their umpteenth moose hunt happened by, with about 1,000 ft of serious rope and snatch blocks. They had the moose to the road so quick it made my head spin. It really showed us what can be accomplished by the experienced and well prepared. 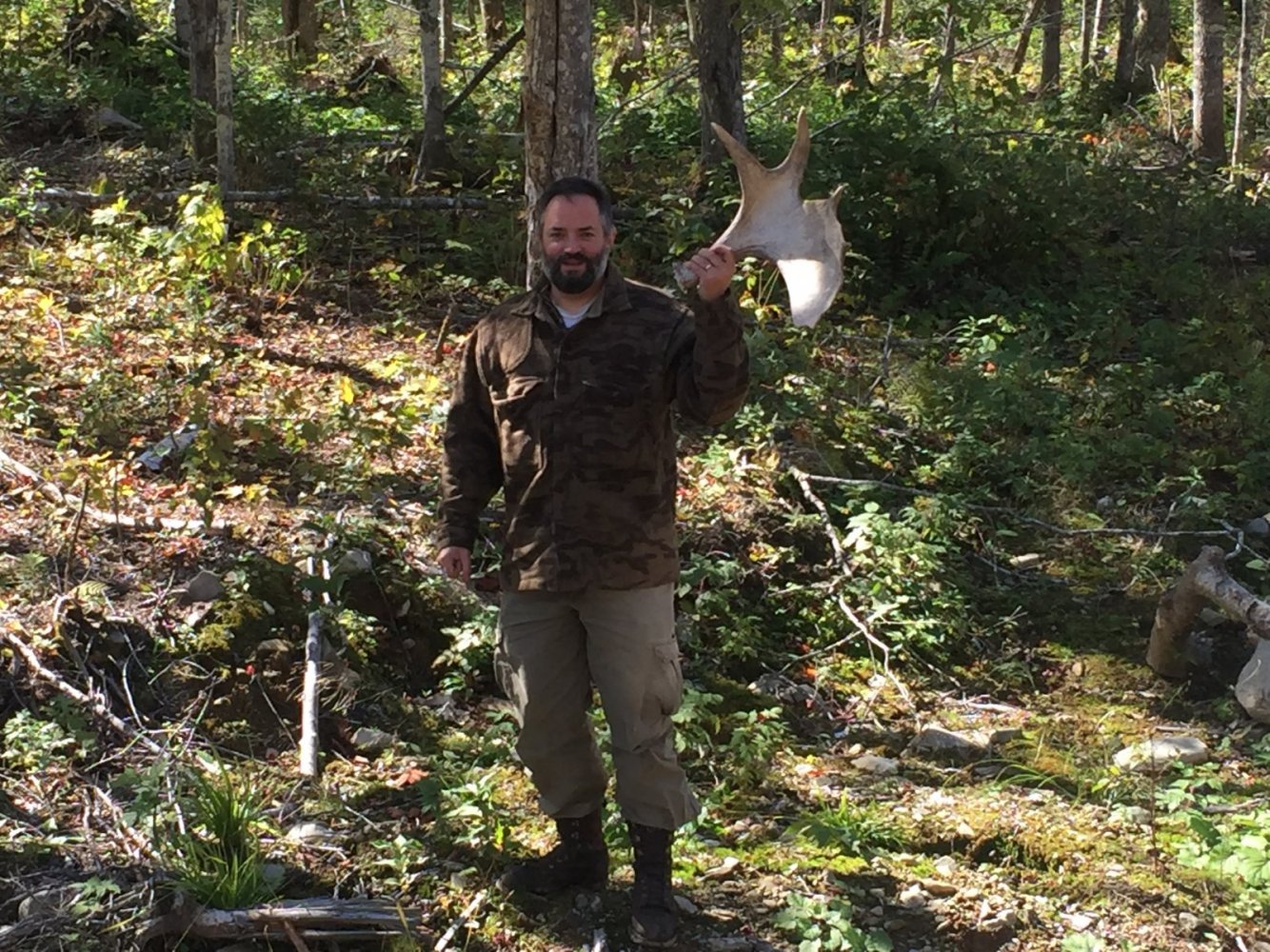 I love the North Maine Woods. I've been up there for a couple of week long bird hunting trips with my dog. Hopefully before I'm too old to do it I'd love to spend a few weeks by my myself remote trapping for bobcat and bear.
Last edited: Oct 17, 2021
C

I'm back unfortunately my son did not get his moose It was very warm and dry. No activity on Monday but slowly picked up. All sightings were before 8am. Saw 4 bulls, 3 cows & 1 unk. Also saw a small bear. FYI the moose hunters seemed to do better on the grouse then the bird hunters. Best part was I got to spend a week with him hunting and he seems OK eating tag soup.

saw some activity on the game camera this weekend camp visit. 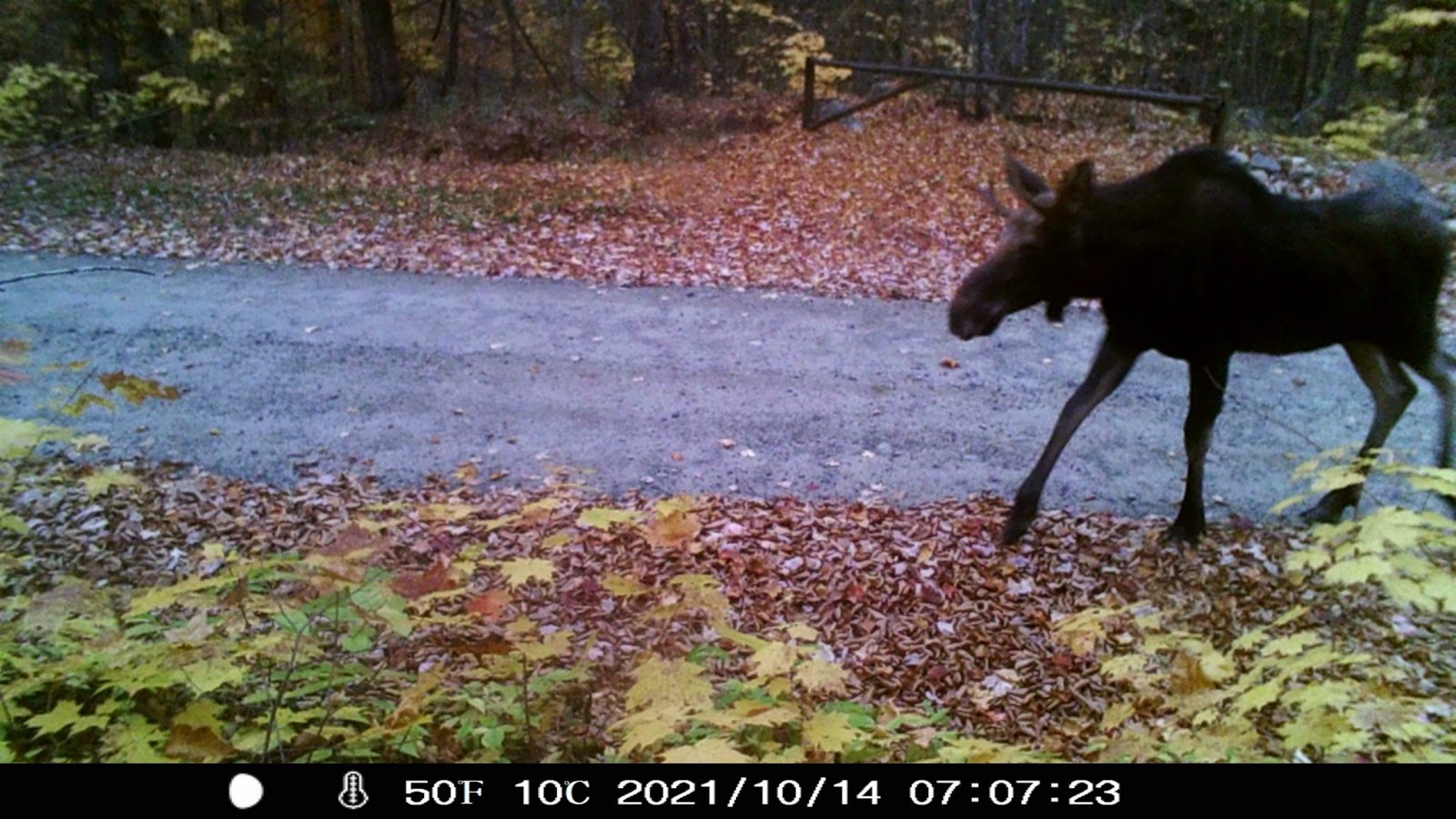 I was up in that area this weekend, too warm. 50's at night kept the birds off the roads. The only birds we shot were when we were walking in the woods, usually it is the other way around.
P

Just got back myself , very few birds seen a few nice moose taken, but very warm hard on the dogs 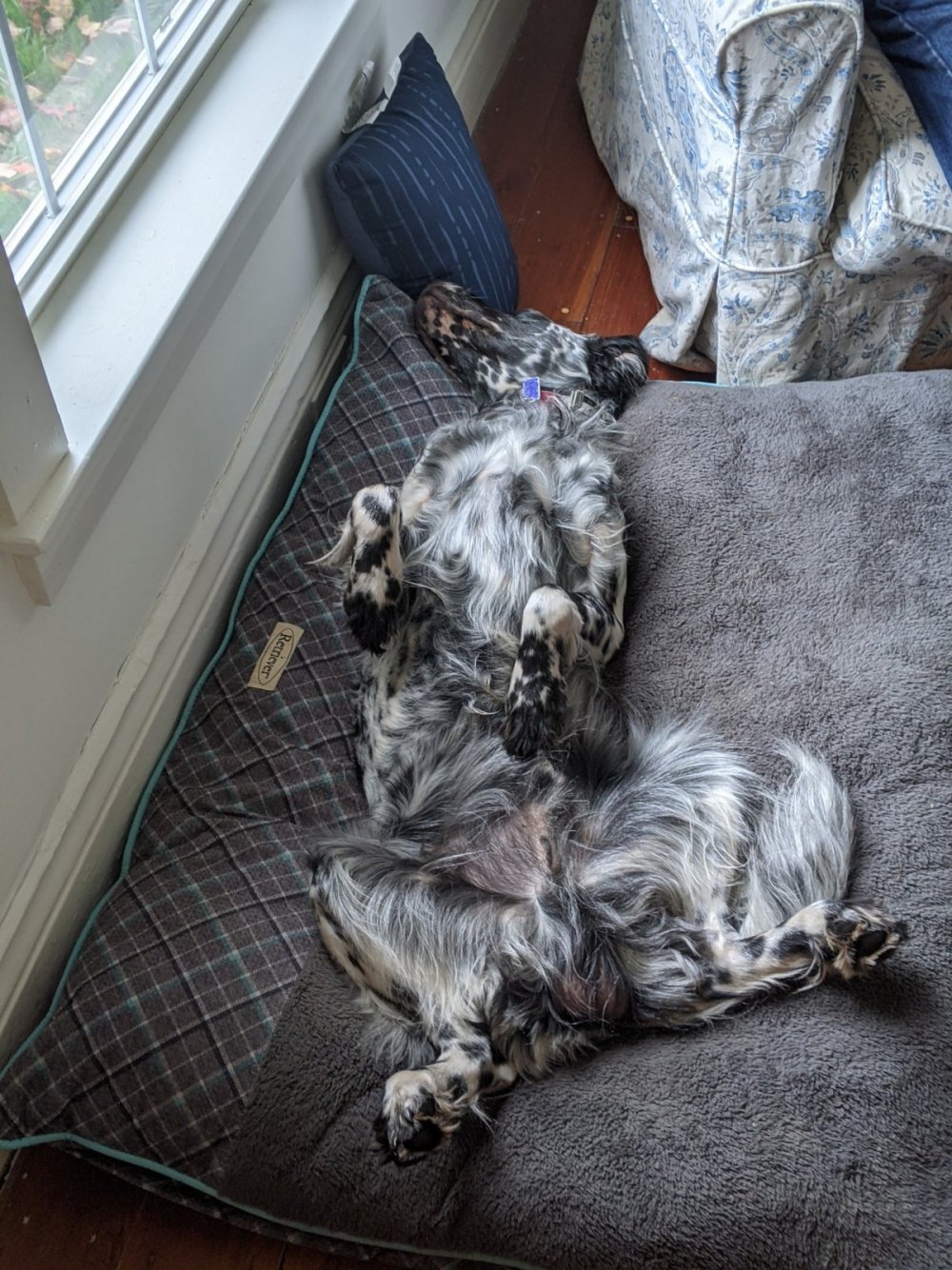 Just saw this. Sorry to hear about the warm weather and lack of action...

My wife drew a cow tag in zone 6 this year and we're leaving Sunday for Masardis. I've been putting her in for the draw since 2001. It's supposed to be cooler next week. Will post a report if we score.

Hey Moose Hunters, this was in my backyard today, along with my size 12 hoof. Big Bambi or Baby Bullwinkle??? 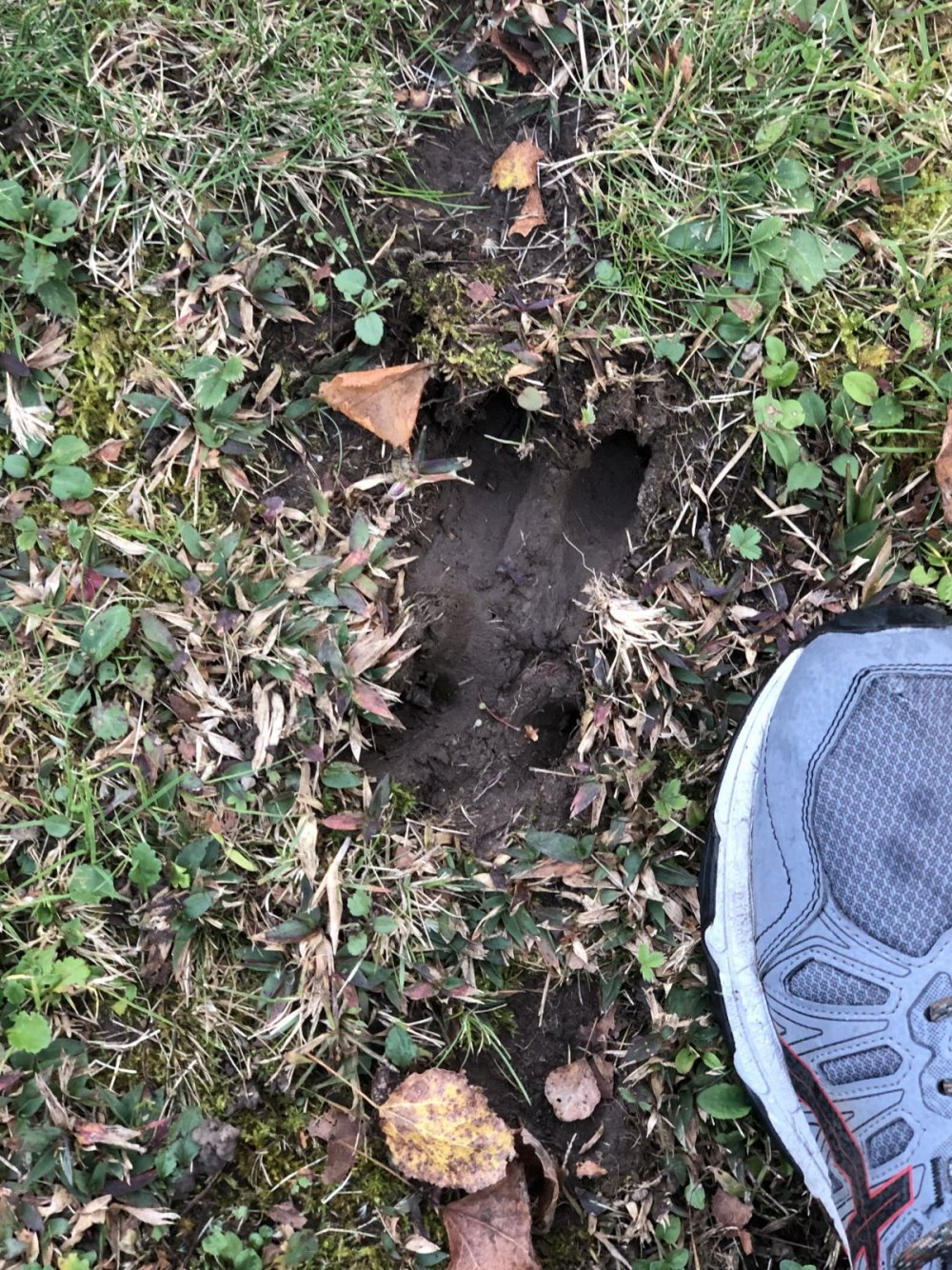