Morning, Iâ€™ve been lurking on the site for a bit and figured it was time to join the fray. I recently picked up a well-used â€™74 Midland skiff that has been bouncing around on craigslist for awhile. The boat needs some serious cosmetic work with a few repairs/parts in the mix, but the deck, transom and stringers were replaced about 5 years ago and all seem at this point to be very solid, although the deck needs some patching. A couple of things to point out is that the previous owner essentially laid a second hull inside the original to beef up the hull and he raised and inclined the deck to help with drainage. I like the added hull strength but Iâ€™m not sure about the raised deck yet. Iâ€™m in the process of stripping all the hardware in preparation of patch and paint work and figured folks on this forum would have some ideas on a couple questions I have.

1st question is regarding the deck. Iâ€™m going to leave it for now, but Iâ€™m wondering how others feel about deck height on these boats. Iâ€™ve read some comments that the deck height is too close to the waterline and can cause drainage issues, but you lose freeboard and some stability with the raised deck. Iâ€™d say the deck at the bow is raised about 6 inches, and itâ€™s not clear how much it was raised in the stern. Thereâ€™s only about 15â€ of freeboard at the mid-point of the deck, which isnâ€™t a whole lot of freeboard. Anyone know what the approximate freeboard is for these boats? Any comments on the stability and roll of these boats with the standard deck height?

My second question is regarding the console and weight distribution. At this point Iâ€™m only going to be using portable gas, which will probably stay in the stern with the battery. The current console needs to be replaced and Iâ€™m looking for opinions on what to replace it with. Iâ€™d love to put a little pilot house up in the bow but I donâ€™t think thatâ€™s much of an option without dropping the deck back down. But what do folks think about the size console I should be looking for? I'd prefer to have the console well forward to maximize deck space. Do I want to keep it small and light or something with a little more beef?

Thanks for any input, 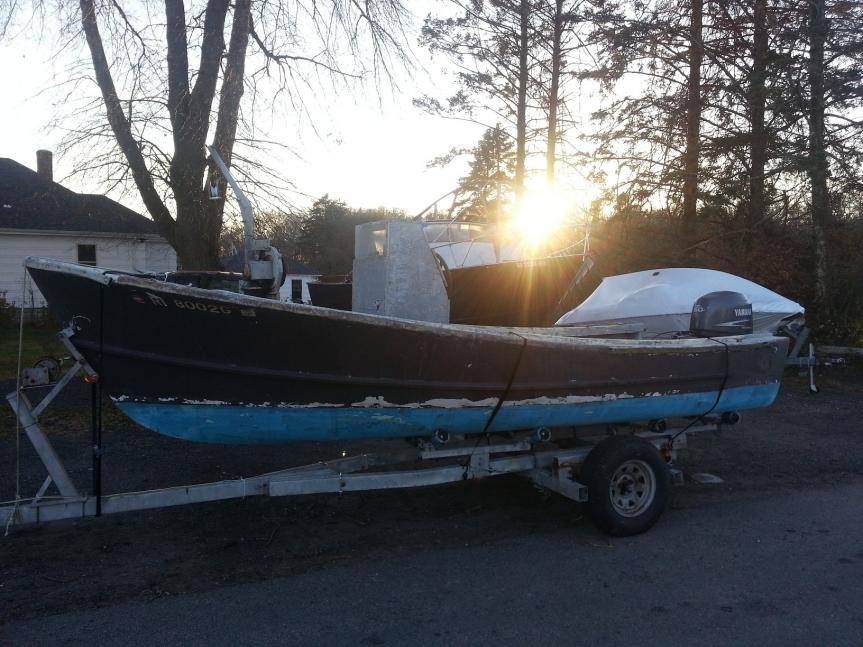 Have ya weighed her? Have ya run her at all...?

Yes, it's a 60hp. I have not weighed the the boat or been on the water yet. I may try and take a test run next week over the holidays, but I have some engine maintenance I want to take care of before putting any stress on the engine.

I think I was behind you last week on Pt Judith rd???

I say that in jest wineyarders...you should talk to Bill the admin of the forum he did an extensive rebuild of his Midland. Look him up on the forum he documented a good portion of it

Ayep, she's a sight alright. Pedlyr, I'm sure that was me, the boat was stored at Westlakes for a bit, I hope I didn't shower you with my trailing rust cloud. I would have been just starting out on the relaxing 125 mile tear up 95 to Cape Ann
W

Here's the thread on the rebuild.

wineyarders said:
Ayep, she's a sight alright. Pedlyr, I'm sure that was me, the boat was stored at Westlakes for a bit, I hope I didn't shower you with my trailing rust cloud. I would have been just starting out on the relaxing 125 mile tear up 95 to Cape Ann
Click to expand...

I usually notice Midlands and I remember never seeing yours before. Even at Westlakes.

I know that drive well. Good to see you made it OK. Good luck with 'er.

Thanks for the well wishes. Not sure about the other boat but it's at westlakes. And thanks for the link to the midland rebuild, I read that and a couple others several times before the purchase. Actually the information from Bills thread regarding a reinforced hull was one of the reasons I got the boat - hoping he or one of the other guys that own a midland will chime in.

Hey just saw this.. ya that engine will run that thing right along.. ive seen pics online of them with 35hp on them.. pryrofan ( Al Wilcox) was the one who finished the plug to these boats.. the plug was started in maine by a couple of brothers ( forget the name) one owned a rope company, the other owned or started HydroSlave,, they trucked it down to mass and Al finished it for the company Mindland who built the boats..they are a really nice looking boat and this is why I bought it.. they are however known to flip so keep that in mind when you rebuild it.. I would get a custom tank built for below the deck,, as big as possible,, say 30 gal...

the hull is thin in my novice opinion..I ground out the whole hull and took stringers out and relaminated with 2 layers of 24oz roving and a layer of CSM. I also added a tank below deck and replaced the stringers etc.. the boat is solid now.. before it would rattle your bones going over a 6" wave..

keep that motor and dont go any bigger.. like I said these things are known to flip and the scuppers are real close to the water line if they are the orginal ones. if your doing the deck which I assume u are do the stingers over and if you have time either add some glass to the hull or add some core.good luck..

if i ever finish the boat I am working on now I would love to flip my midland over and add a keel to it..

Known to flip...? Really? Why cause they're top heavy or something or what?

That's concerning, particularly since my set up has a raised center of gravity. Although the guy I purchased it from said he worked it in some pretty tough conditions close to the beach and it was a seaworthy boat for the size.

Bill, Can you provide a little more background on this? Is it due to flooding or is the boat have stability issues? Regarding your other points, my boat has a reinforced hull and the deck and stringers are sound, but I'm wondering about the raised deck, particularly since there may be some stability issues with the boat.

I rebuilt a 1982 Midland, There has been two incidents that I have read of where 19' Midlands had pilot houses added to them and they flipped ( rolled, turtled or whatever you want to call it) in a beam sea. This is a old school open skiff design with a narrow waterline beam. IMO it is a safe boat when operated within her capabilities.

OK, good to know - no pilot house for this one. The KISS principle will remain in effect.

I was throwing out an old laptop last night and while checking through the HD I found this link to a discussion forum talking about one of the 2 Midland 19 sinkings I have heard of. This was in LI Sound. The pictures no longer work but IIRC one of them showed the boat with the added pilot house. This happened in 2007 not recent!

That was right in our back yard. We have lost several people boating out of Clinton over the years. Never good to hear that kind of news. You really must consider the effects that modifying a hull has on it's behavior under all conditions. Same goes for over loading a vessel. Staying safe out there starts with thinking safe on shore, and I don't just mean life jackets or speed limits. Today is the first day of spring! Tis the season......so be safe, think ahead, and enjoy the entire season. I look forward to reading GOOD boating stories from you guys come next winter!

Hey thanks for the update. The forward third boat has a narrow beam so it makes sense that raising the center of gravity forward could create stability issues. My midland has a lot of additional hull glass so im glad for the weight but it also has a raised deck and I was planning on putting the console forward. It's still not all that clear what caused the boats to capsize. To me it sounds like excessive lateral pull on the bow or maybe flooding. I have a hauler but I'm a bit leery of getting a trap hung up and having things go awry. Anyway, thanks for the additional info, it gives folks food for thought.

Reading the newspaper article it sounds like he was anchored from the transom, which we all know is dumb. With all that structure on the front there probably was no way for him to get to the bow to anchor. I have a cuddy with the battery, anchor and other gear up in the bow and it feels pretty stable.

After running this boat for a year I imagine with the stern anchor and the currents they get down there the boat flooded through the scuppers.

Overall the Midland is a great little boat. Surprisingly dry/smooth ride with appropriate speed but if you try to push it you'll quickly know it's time to slow down. It rides like a duck and I can ride all day on 6 gal.

wineyarders said:
After running this boat for a year I imagine with the stern anchor and the currents they get down there the boat flooded through the scuppers.

Overall the Midland is a great little boat. Surprisingly dry/smooth ride with appropriate speed but if you try to push it you'll quickly know it's time to slow down. It rides like a duck and I can ride all day on 6 gal.
Click to expand...

I have had a great time with mine, There has been days when I wish I had a bigger boat but at the end of the day when I slide her on the trailer, hose her down and top off with $20 worth of gas I'm happy she is what she is.
You must log in or register to reply here.
Share:
Facebook Twitter Reddit Pinterest Tumblr WhatsApp Email Share Link