What's the ballpark avg cost for a custom aluminum tank. I figured 10-20 a gallon

Closer to 10 i think. There are some variables , like wall thickness and complications of the shape of tank

I had a 90 gallon made a few years back by Atlantic it was 750 delivered.

I got a fairly good quote from a place in NJ. I forgot who told me about it now though.
O

anyone looked at plastic tanks made by triple m plastics in me. they make tanks for diesel or water in any shape or size

Really hate to say this since I think the CO. is a good CO. and they refunded my $$ for the cost of the 100G tank, BUT, I owe it to the DEBF community to say it was a nightmare!!! I also have to say I do not know if its the same owner now or have changed methods of fabrication or maybe just my bad luck. Without living it again thru a long explanation, it took almost 2 months to get it then, first one arrived smashed during shipment, second one was not per design so did not fit, and after 2 months the installed one leaked! They would have come down and repair, but after the lost time and cost of cutting up the deck again, I went with an Alum tank since I had to cut out the deck again anyhow for the repair and did not want to take any more chances. Lucky that I was around when it started leaking to shut down the bilge pump and avoid major fines plus that I do my own work so did not have to pay a yard to cut up my deck. Maybe if your tank will be accessible and removable you can think of getting one but if you do, special mounting methods have to be adhered to due to boat flex/movement though that was not the reason for my top seam leak.

I had a 20 gallon tank made last summer for around $350 Can. at a local boat repair facility. They gave me a choice of stainless, aluminum, or regular steel but, looking at the all grey hair on my 67 year-old head, they hinted that the 20 year life expectancy of a regular steel tank might be good enough for me and that's what I went with.
ChipTam

What is the best material to have a diesel tank made of?

Pick your pleasure. Poly works well for me, mine's gelcoated on the inside and its been fantastic.

What is special iso resin. I asume vinalester or poly resin as well? How are the penetrations done?

Drilled and tapped. Sealed with pipe thread compound that is compatible with fuels using stainless steel fittings and pickups.

F/V First Team said:
Pick your pleasure. Poly works well for me, mine's gelcoated on the inside and its been fantastic.
Click to expand...

if you get a chance, can you put up a pic of one of the fuel tanks you build.

Next time I'm under the deck, sure

You going to continue to build FG tanks with the advent of ethanol going into diesel ?

Not sure if you'll be able to see very much, but it's worth a shot.

If you scan around to the various posts that I've tossed up with renderings you should be able to see the fuel tanks. Aside from being digital, they are exactly the same in their construction.

Solid FRP product with stainless steel fittings. Bronze and copper can be used in lieu of the stainless upon request. I like to put in deck fills with 2" openings so that fuel trucks can be used, filling the tanks goes so much easier when you can pump 90 gallons a minute into them (or even 40 for the smaller vanes on the trucks) vs the 1.125 gpm that you find at marinas. Pickups are usually held off the bottom of the tank roughly 1/2" and if there is a depression due to the turn of the bilge we utilize this natural feature to maximize the total usage of the tank - since the fuel wants to flow to the lowest spot on its own accord. Lately we've been running 5/8" supply lines which has worked out very well. Scared the Cummins guys when we flooded the Racor because the flow was so tremendous they thought there was a leak somewhere and leapt out of the hell hole so they didn't get wet. Very amusing. All vent lines are 5/8" and the return is 1/2". Necks are often glassed to the top of the tank and to the bottom of the deck for those times when fuel is leaking out of the nozzle of the fill up station, makes the CG happy and it makes cleaning up the mess oh so much easier.

Absolutely. I am looking into other alternative sealer coats for the interior of the tank, I think I've found a few to choose from but the cost is prohibitive currently. Pretty much doubles the cost of the tank just for interior coating.

Please note the neck going from the top of the tank up to the bottom of the deck. I have not rendered in the fill, supply, return or vent lines as of yet. 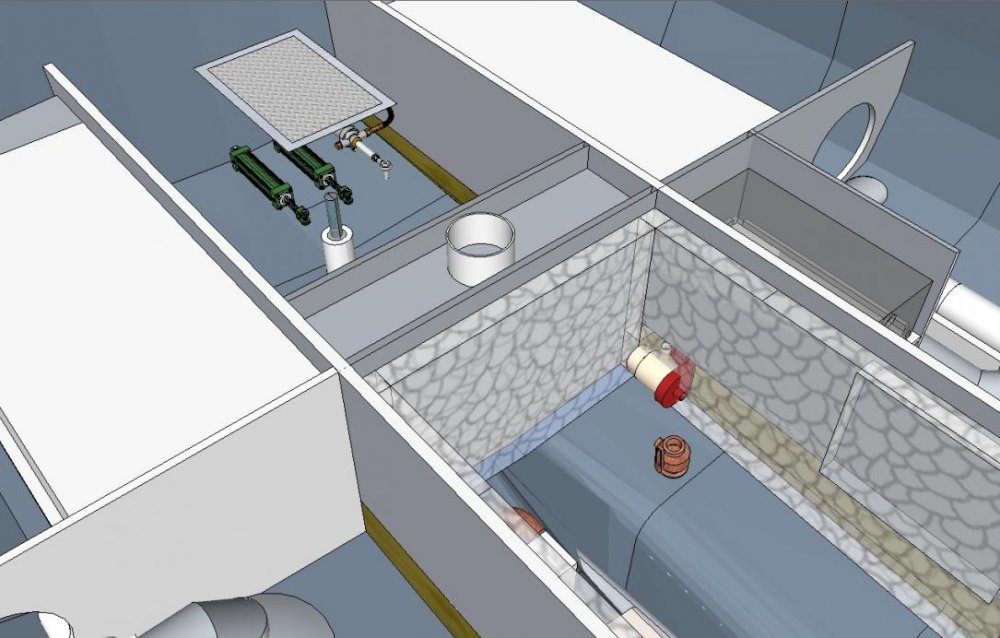