Federal safety rule, which goes into effect April 1, 2021, applies to boats less than 26 feet operating at plane or above displacement speed.​

Exceptions to the ECOS requirement include if the main helm of the vessel is in an enclosed cabin or the vessel is not operating on plane or at displacement speed. Low-speed activities such as trolling or docking do not require use of an ECOS. The vessel operator is also exempt if the boat's motor produces less than 115 pounds of static thrust — or about the size of a 3-hp engine.

The new rule applies to all navigable waterways. Current federal law preempts states from enacting or enforcing a law on a subject that is different from a federal law on the same subject. States also cannot enforce federal law. The National Safe Boating Council notes that the U.S. Coast Guard expects to reach out to the seven states (Alabama, Arkansas, Illinois, Louisiana, Nevada, New Jersey, and Texas) that currently have some form of ECOS requirement to determine enforcement. In the 43 states without ECOS rules, it's expected that a new ECOS law violation would be adjudicated in federal court. While boat operators who fail to follow the new requirement could face a $100 civil penalty for the first offense, BoatUS expects the Coast Guard's initial focus will be education.

Here's the USCG link Engine/Propulsion Cut-Off Devices if you were worried about retrofitting.

According the the FAQ in that link it only applies to boats made in 2020 or later.
T

Kenneth said:
According the the FAQ in that link it only applies to boats made in 2020 or later.
Click to expand...

I interpret Q6 as applying to boat manufacturers, the key word is "installed". While Q3 applies to boat operators, basically if a boat/engine already has an engine cut off switch, you must use it if your boat is less than 26', doesn't have an enclosed helm, and you're cruising above displacement speed.


Q23 is a bit rambling, but the answer is clear. If the engine cut off switch exists, it must be used.

This is the difference between the rule applying to most boaters versus applying to the handful of boaters that bought a new boat in 2020 and beyond.

I wonder what actual problem this is based on - ie how often does somebody really fall out of a running boat?

True story - the CG had me tied up to one of their RIB's in the Merrimack for a safety check. We were drifting stern with the current. Guy at the helm was facing forward with his hands on the wheel, someone more experienced was showing another rookie how to use some electronic device they had for safety checks.

I said "Hey we are going to drift into that can you know" - guy at the helm's first instinct was to run back to the transom to get ready to push off the can, he killed the engine due to one of those stupid devices and then couldn't figure out how to restart his engine. In a panic he fumbled with the putting the clip back in, eventually he did get it working before we hit the can; senior guy was shaking his head in frustration. We wouldn't have actually hit the can, I was still running and just had to step up to the helm, but they seem to cause more problems than they prevent in my eyes.

The better ones are the ones that are a separate switch - at least those you can obviously flip back up if you accidentially set them off. The ones on the key switch aren't complicated or anything but take an extra bit of thought if you are freaked out to re-install.
T

In 2019, 299 people fell overboard and 189 of those 299 died. I should look deeper into this report, but I don't see how often the skipper falls overboard while cruising above displacement speeds. 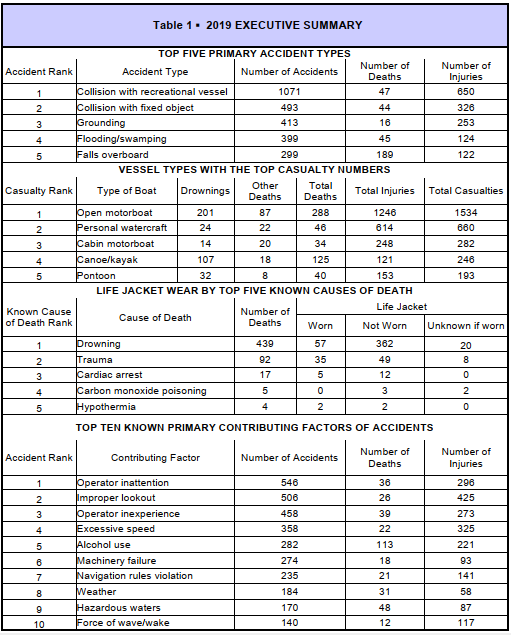 tsharac said:
In 2019, 299 people fell overboard and 189 of those 299 died. I should look deeper into this report, but I don't see how often the skipper falls overboard while cruising above displacement speeds.

Above headway speed definitely is the key thing there, at headway speed in my little center console I might leave the helm for a moment to kick something over or adjust something, but I'm taking that risk because I am in the harbor in broad daylight at 5 knots with people and floating objects all over the place. I fall out, look stupid, and get rescued - I live. In the dark, no not going to do that, certainly not outside the busy harbor.

Now in a little center console, going too fast, doing something stupid - the same reason jetskis have those (and people tend to use them on a jetski), you could smash a wave the wrong way and manage to get yourself ejected, I guess. But never once I have ever thought I was going to fly out of the boat when at the helm - only thing being tethered to it does is make it so you can't step away - maybe that's the point.

Really dislike laws based on theoretical situations that almost never occur - this does seem like another one of those.

I once pulled a guy out of the drink that had been ejected clear out of his boat and the boat kept going without him. It actually took all three of us on board to get him over the rail because he was ready to go down for good. He cried like a baby when he realized he wasn't going to die. Yet I have a feeling he didn't learn much that day because he got lucky instead.

It’s a difficult call. I see the merit in it, but not a fan of the government telling me how to run a boat. When I was lobstering in a 12 foot skiff I never wore the lanyard. I couldn’t it would been pulled out every time I hauled a trap, or gotten tangled in rope. I think the law needs more ifs, ands and buts. I can see a single Capt fishing by himself needing one but if you have a crew onboard.....why?
C

I don't know. I think it isn't all that hard to get ejected from a boat if you are going fast. Not that this would happen to anyone here, but then the policy probably isn't aimed at protecting people who know what they are doing.

For example: Video: Florida docks destroyed by out of control boat

So the captain falls overboard, engine quits and frightened passenger can’t start the boat to go retrieve the captain. Captain has the thigamajig. Boat drifts into rocks. Captain drowns because no one can start the boat or figure out how.
C

andy65 said:
So the captain falls overboard, engine quits and frightened passenger can’t start the boat to go retrieve the captain. Captain has the thigamajig. Boat drifts into rocks. Captain drowns because no one can start the boat or figure out how.
Click to expand...

Yup. That's definitely a possibility. Even without the rocks -- cold water and a bit of wind pushing the boat further away could be enough for a bad situation to develop. So if they were going to make rules, they really should have included guidance that that people attach a spare key for the cutoff switch nearby.

tsharac said:
In 2019, 299 people fell overboard and 189 of those 299 died. I should look deeper into this report, but I don't see how often the skipper falls overboard while cruising above displacement speeds.

IDK, I know a lot of nitwits bought boats during the COVID shutdown.
T

mmac1913 said:
IDK, I know a lot of nitwits bought boats during the COVID shutdown.
Click to expand...

Covid shutdowns started March 2020 so the report was before then. We'll see how the 2020 and 2021 numbers look with the increase in new boat owners and uptick in boating.

I have a Raymarine LifeTag that's wired to a relay that opens the run circuit and shuts the boat down if I go overboard. I boat solo 75% of the time, and I might have a chance of getting back to the boat if stops. Without the Lifetag the boat, if on autopilot might be found 300 miles away.
The subject of government mandates is not for the wise boater, but the morons that think a checkbook buys you knowledge and experience. Same reason there are warning labels on lawn mowers. Still plenty loose limbs every year. Gov mandates can't fix stupid!
T

Anyone else have experience with using and/or installing these?
C

An advantage of these electronic devices is that they avoid the problem andy65 pointed out above -- the cut-off key in the water with the skipper making it difficult for the passengers to restart the engine. As I understand it, the electronic devices allow the engine to be restarted immediately without any further steps.

We pulled a friend's boat off the rocks after he was ejected. I know it's cliché to say, but he's very lucky to be alive. He held onto a lobster buoy for quite a while before someone finally saw him in the water. The boat was damn near a mile away from him when it grounded out.
Had he been wearing the cut off lanyard, he'd have been a little wet and embarrassed, but would have kept boating the rest of the summer. That boat has still yet to be back in the water unfortunately. 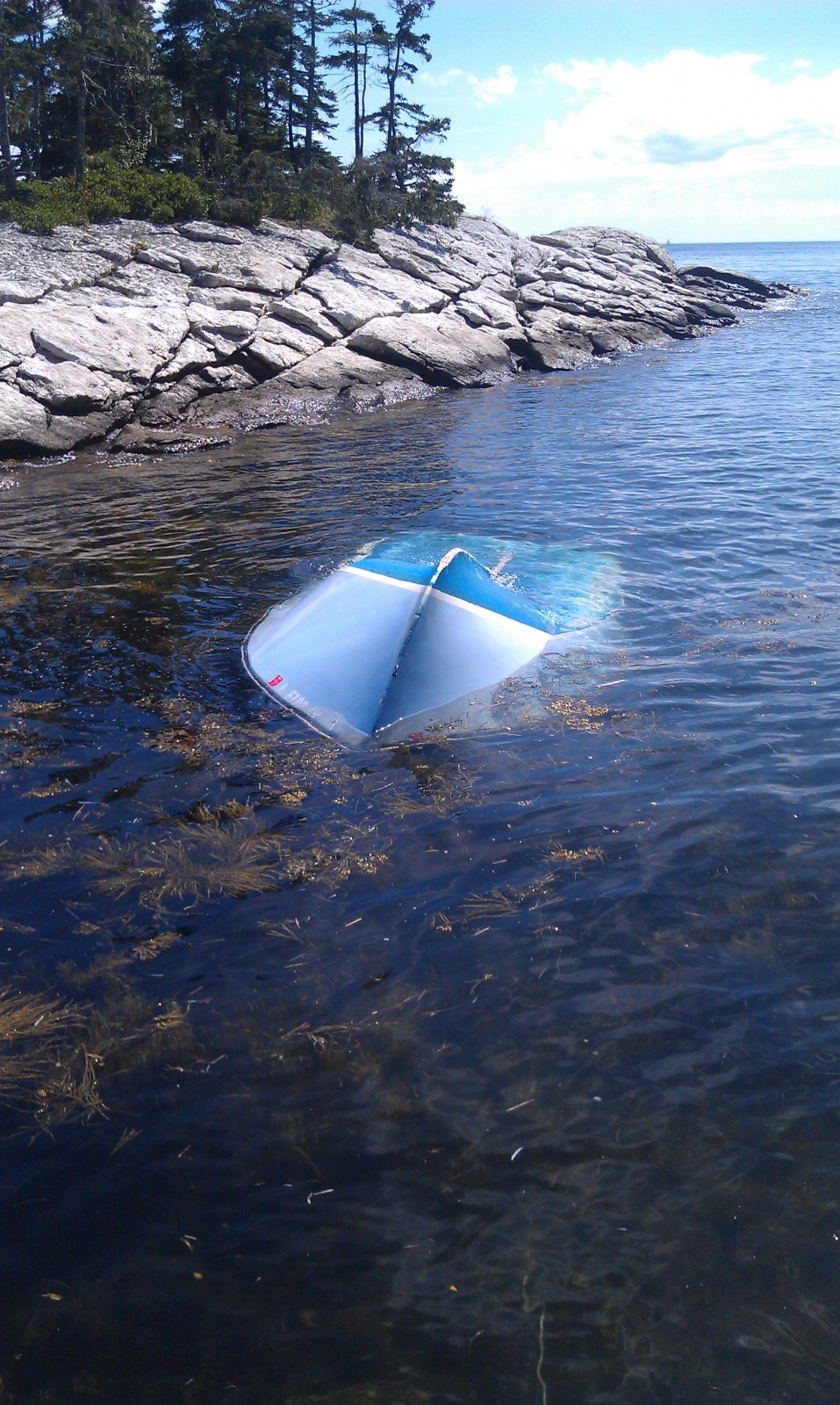 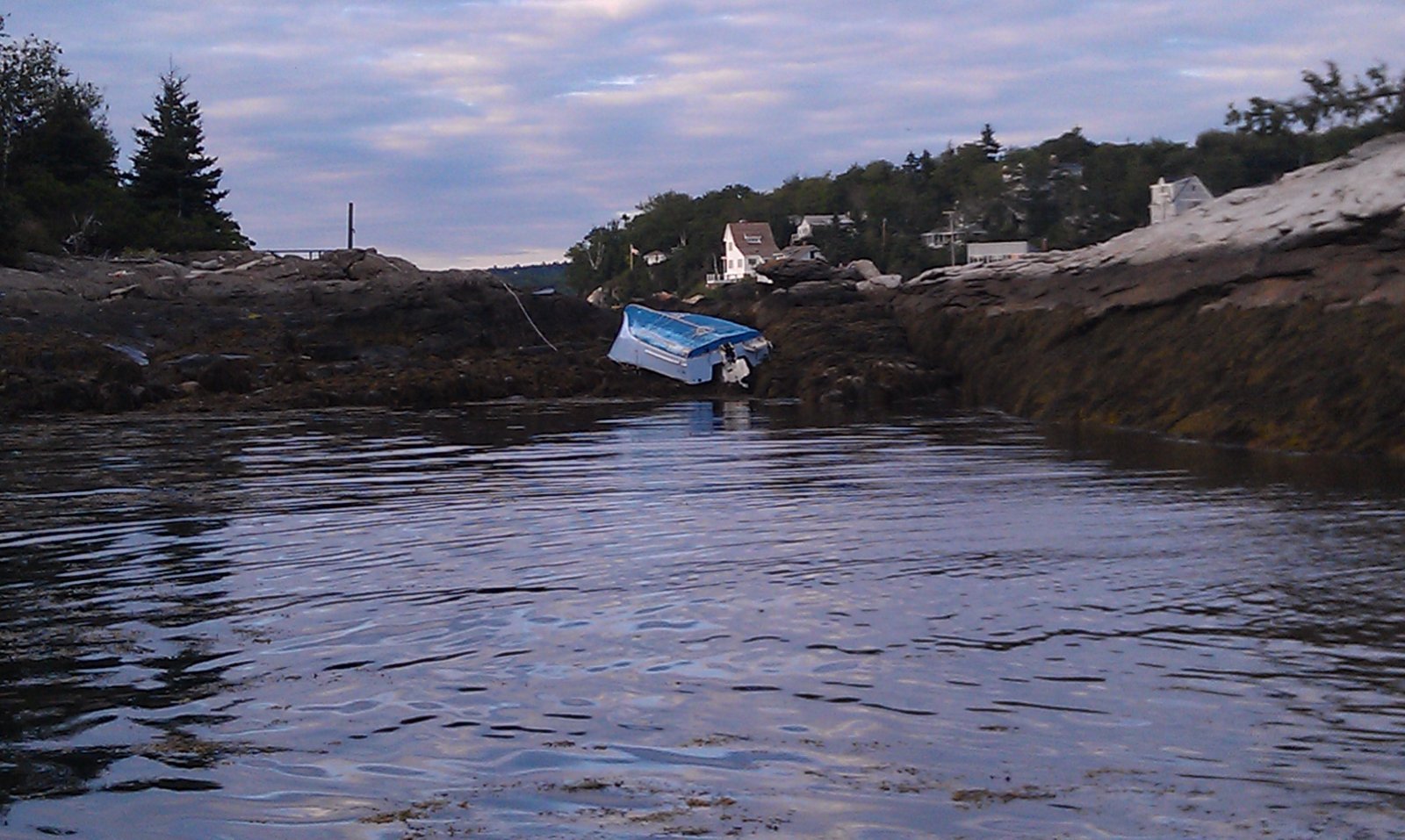 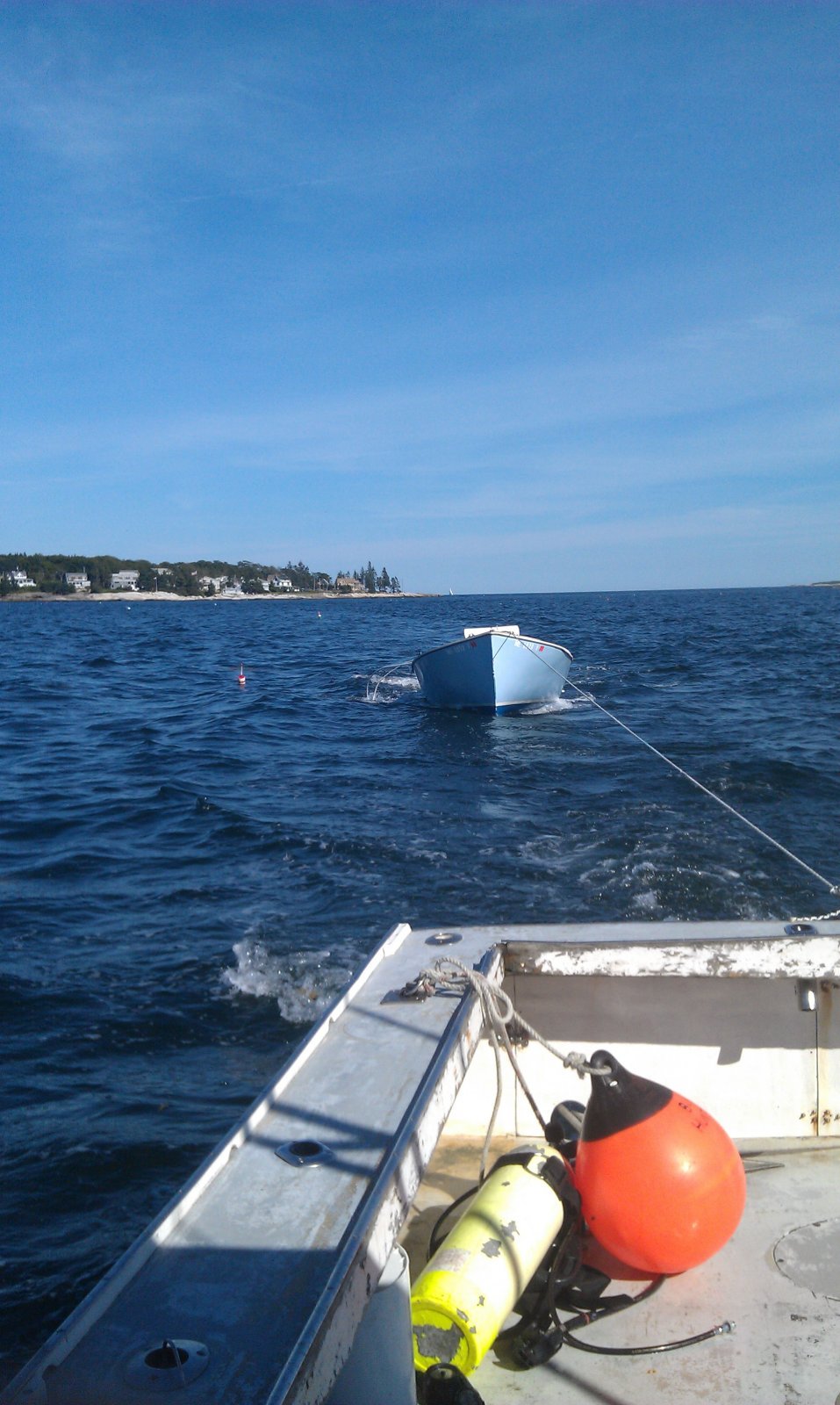 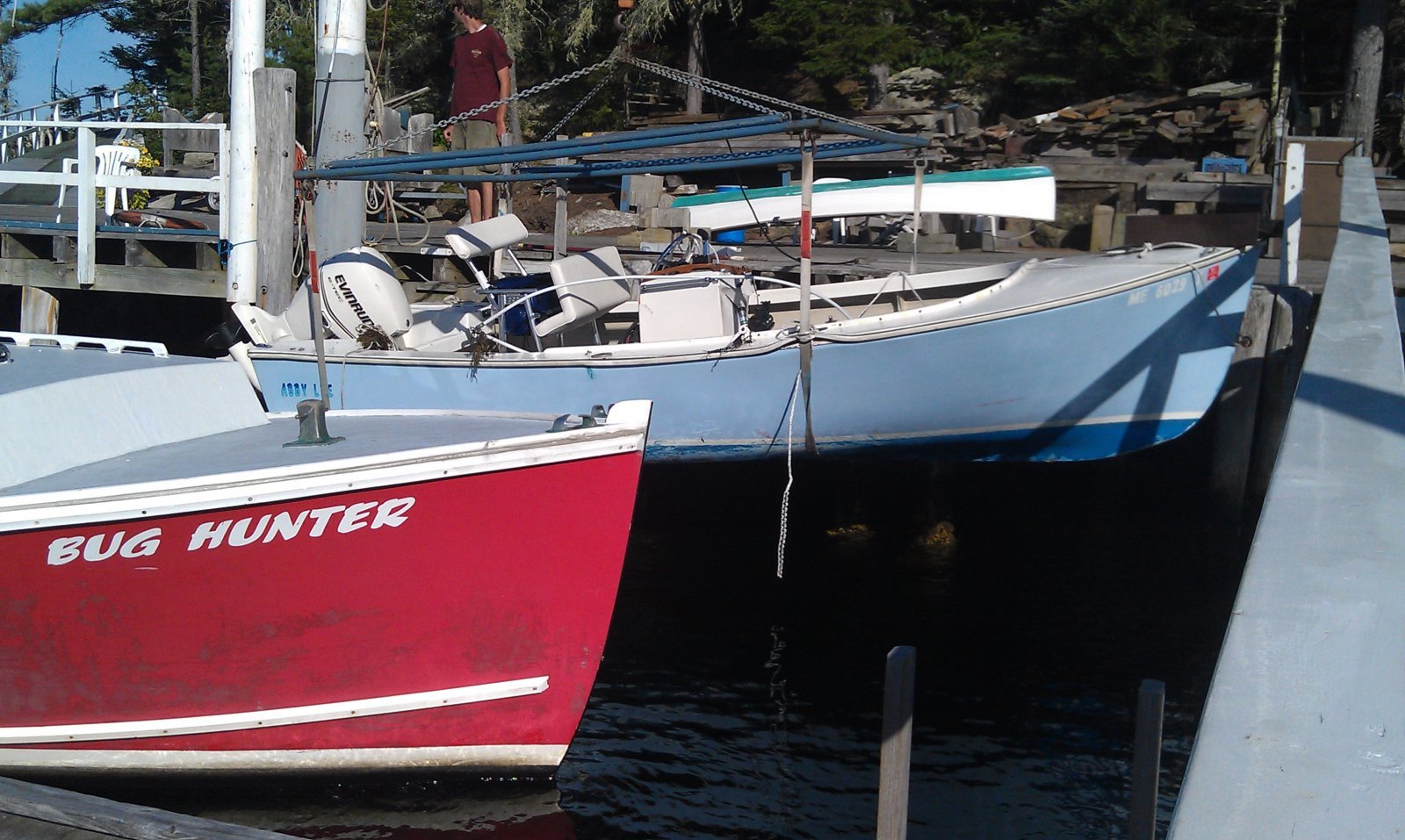