New member here and I guess you can tell from my screen name what kind of Downeaster I have J. Think this is a great site for some very special kind of boats.

We built the boat back in 1989 after purchasing just the bare hull from then Flyepoint Marine. After 23 seasons and over 5000 hours, the boat still runs as good as the day it was first splashed. She has a 6BT 210 HP Cummins with a 2.54-1 gear and a 26 square wheel. Cruise speed is 14 knots and 16 WOT. Not a speed demon but she does everything we want, will go through anything and just canâ€™t beat the almost 2 MPG we get at cruise, especially for a boat as big and heavy as she is. The engine has been great to us and other then the usual maintenance, there have been no issues at all. Thought about repowering with a 315 or 370 but each time I see the price of fuel these days, I begin to realize the extra few knots that I will gain wonâ€™t offset the cost to repower. Maybe someday if the engine ever goes.

We started building the boat in March of 1989 and completed it in October of the same year. Would I ever do it that way againâ€¦â€¦.heck noâ€¦â€¦but we were able to build a boat exactly the way we wanted it and have been enjoying it ever since. Most of the superstructure is glass over plywood, with the exception of the roofs which are Baltek. There are 4 bunks up front along with galley and head. Salon is very roomy and comfortable as well and the crew is usually passed out cold on the rides home. I must say that I have a lot of respect for you guys who build boats for a living, itâ€™s a lot of work. Bruce Grindal was at Flyepoint back then and it was his help and advice that enabled us to complete the boat the way we did and was a sincere pleasure to deal with.

The boat has been through all kinds of weather and it seems the rougher it gets, the better she handles and the boat has saved our buts on many a trip. People who make their living off of the water love this boat and I canâ€™t tell you how many offers we had to sell her. We have always graciously refused and have never had any real desire to part with her because she does what we need. I still get the same thrill when I head out with her as I did the first time I took her out 23 years ago.

Sorry about the picture, itâ€™s from my cell phone and Iâ€™ll post a few better ones in the future.

Iâ€™ll post more details later when I have more time. 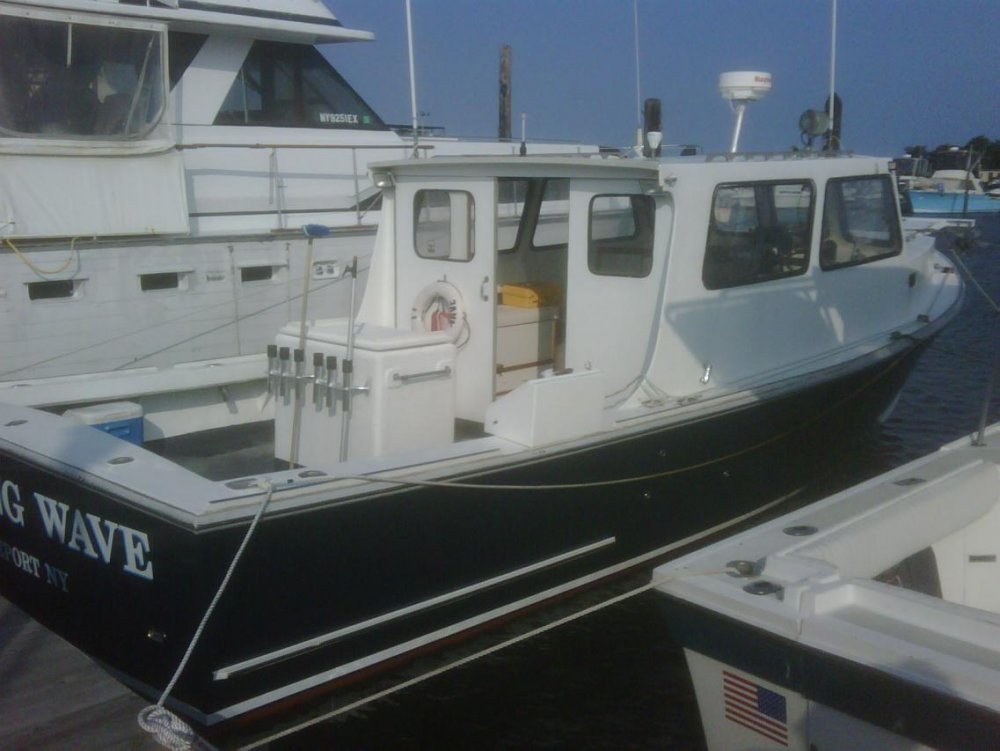 Ed, welcome, very very nice boat!
This is a great DE forum.
ALWAYS something new going on to pass the time, learn etc.
B

Thanks Bill and looking forward to learning some new tricks. 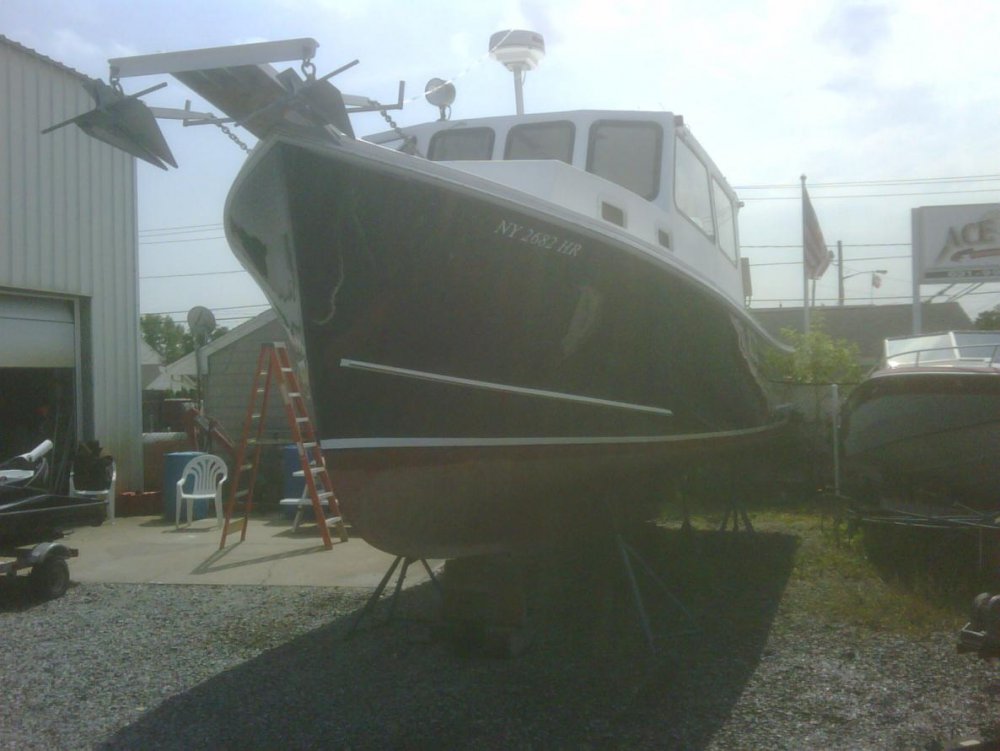 Nice looking boat Ed..i have seen you out around Jones Inlet a few times..Mike F/V Laura S
B

Was down at the boat this afternoon taking some gear out and took a few shots with a new camera I got for xmas. Seats in the main cabin were purchased from a ponton boat manf. in the midwest. Super comfortable, very cheap, very well made and you can get them in many custom colors/sizes. Purchased the one on the port side first and liked it so much I got another for the starboard side the following year. I built the platform they sit on out of 1 x 1's and then made removable panels for the front out of starboard to create a ton of storage below. Worked out great and they are very durable. Seats also flip up and provide a ton of storage inside as well. They are about 34 inches deep but for some reason don't look it in the pictures.

Have a few shots of her running that I need to scan. 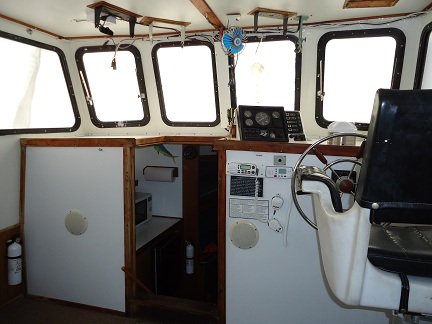 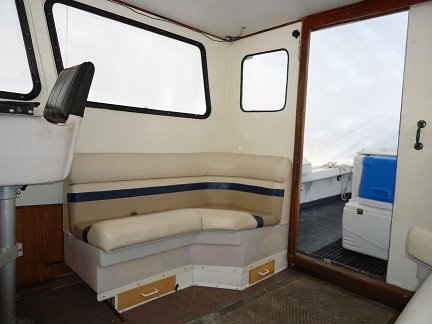 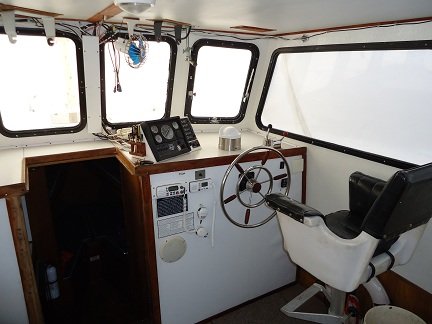 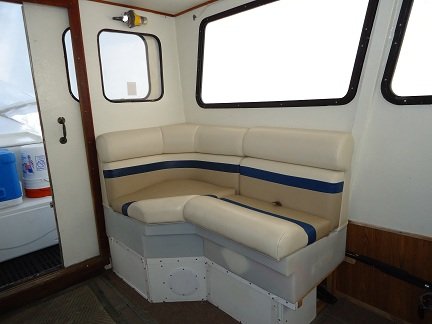 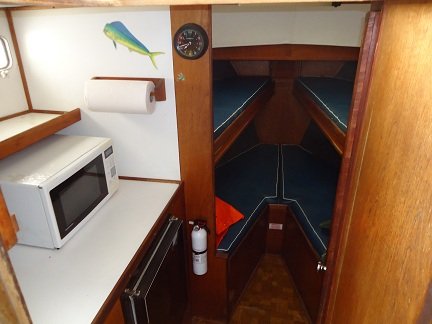 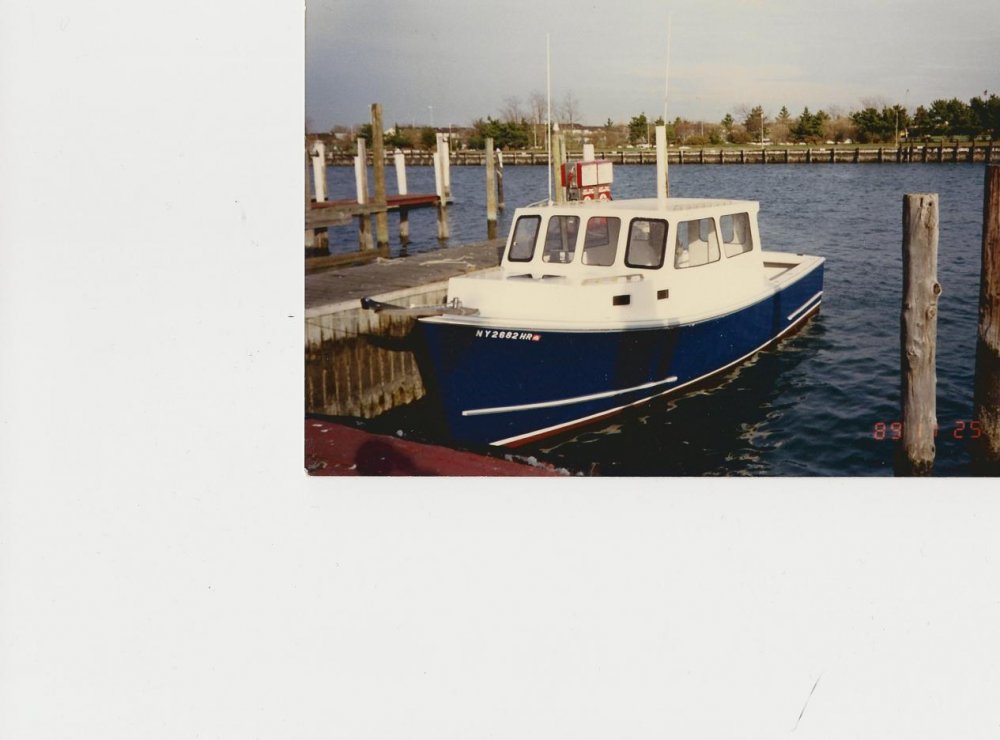 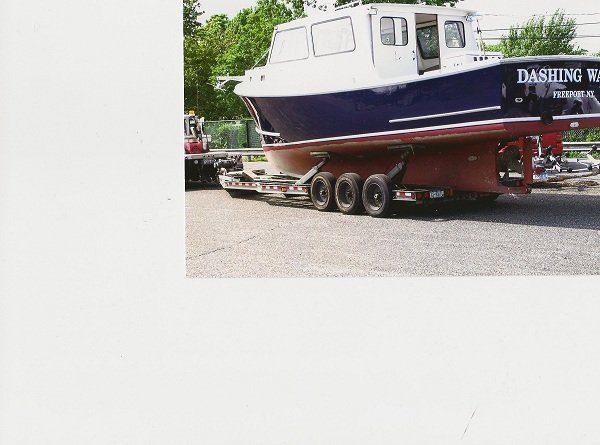 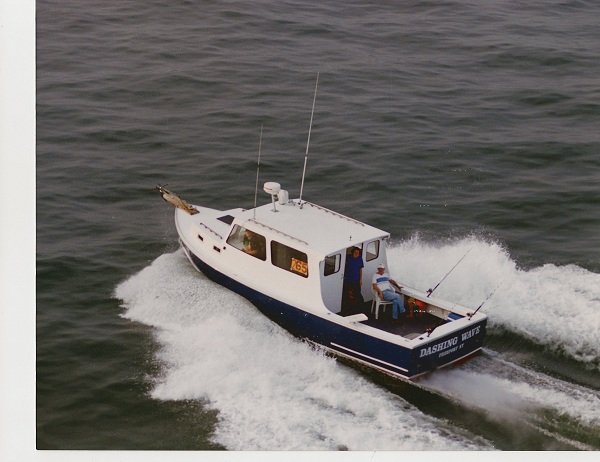 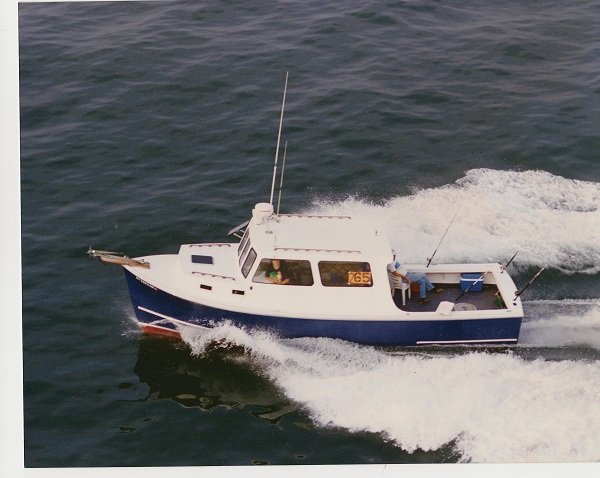 Hey Ed, Looking good. How are you enjoyning the new anchoring system?
Love those helicopter shots - Is that Larry lounging in the back?

Hey Rick â€“ Thanks. That shot was actually taken when the boat was just a few years old coming back for one of the local shark tournaments. Some guy took shots of every boat and then got the contact info from the tournament. Pretty cleaver idea and Iâ€™m sure he made some nice $$. I have those shots in 24 x 24 frame and are hanging in my den at home. No, thatâ€™s not Larry, itâ€™s my Dad actually and one of my brothers is in the doorway.

The other shots are after we had the hull painted 3 years ago. We used Imron and had the work done by Raybo Marine. He did a great job and actually used an Awlgrip primer under the Imron. Itâ€™s not as tough as Awlgrip but the beauty is its very easily touched up and the paint is easy to get at any local auto paint store. After a season of fishing all we do is touch up the dings and scratches and buff out. It's look brand new and it's really nice to be able to do that.

Iâ€™m very happy with the anchoring system and glad I took your advice and went with the blocks rather than the davits. You can really â€œspread emâ€ 180 degrees with the blocks and as you know, that really helps when you have wind against the tide conditions Now the crew complains if I'm more than 10 feet off the number and my only regret is not getting the system 5 years sooner J. That Electra-dyne hauler is amazing and Iâ€™ve had no issues with it after 4 seasons of heavy use and probably over 1000 anchor retrieves. Bill Heath really does great work as well and everything worked out great. I run 7/16 line on mine with a 20 lb anchors and it pulls them up like feathers. I also used Schaefer stacked roller blocks along the side, rather than the blocks Bill sells and they are working out very well.

Heard there was some pretty good codfishing on Hempstead last week. Hope you got in on it.