I know from various posts that many of you utilize PC software programs for plotting, planning, and navigation. I personally think the features provided by PC based programs are far and beyond what one can get in a traditional chartplotter, and are much easier to operate. I have been a fan of the MaxSea and Nobeltec TimeZero driven programs since their debut, and have sold many copies along with NavNet3D systems to provide full integration between the PC and Furuno Radar and Sounders.

For those who do not know, Nobeltec was purchased by MaxSea almost three years ago, and MaxSea's engineers went to work and released Trident TimeZero, which had the same capability of integrating with a NavNet3D system and provide full chartplotting and radar control capabilities. Now, Nobeltec has come out with Catch TimeZero. This software is the equivalent of MaxSea's TimeZero Professional, which is the number one commercial fishing software worldwide, although not available in the United States.

Catch is an all-inclusive program that provides the ability of the user to use the software as a standalone plotting tool with advanced layer management provided their is position input to the PC via NMEA0183 or NMEA2000. It also, has the ability to tap into a NavNet3D ethernet network, which then provides position for plotting, full DRS radar view and control, DFF sounder view and control, and most importantly, the patented Personal Bathymetric Generator. Also, before you leave port, you can use the built-in weather GRIB Update tool to get visual weather data ranging from Ocean Current, Sea Surface Temp, Chlorophyll, rain, snow, sea surface anomalies, etc. You can forecast up to 8 days in advance, and it is a free service included with the software.

The software uses the system's existing sounder module to generate accurate three dimensional renderings of the ocean floor, and will overlay that data on NOAA Raster and Vector charts (Included with the software), or overlaid on top of MapMedia's (MaxSea's Cartography Division) high resolution bathymetric charts which can be downloaded for free. I've personally been able to see the system in action, and I've never been as amazed as when I saw the entrance to Hudson Canyon mapped out in real time and viewed in 3D, as the Captain was busy marking off spots as he was seeing pinnacles and arches that weren't on any chart available. (I have to admit, it was not on a Downeast, but a 35 Henriques Express. Still a very solid boat.)

I couldn't take screen shots as I was busy holding onto the grab rail with both hands and riding out the rollers. The boat actually was rigged with a SC30 Sat Compass, so even though we were in 6 to 10s, the sounder image stayed flat and solid, as the Sat Compass provides Heaving Compensation due to its built in accelerometer. Cool stuff. I've grabbed some real time screen shots from Nobeltec's website to show the difference between looking at a standard chart with depth shading, to a full bathy chart after a PBG mapped out the bottom contours. Links to both the Catch brochure and User guide are at the very bottom of the post, so be sure to check out all the images as you scroll down, and let me know what YOU think. For higher resolution images, simply go right to Nobeltec Navigation - Catch and scroll right to the bottom of the page. Enjoy!

Raster Chart With Depth Shading, No PBG, No Contours.

Take a look at a split screen view, with a basic vector chart on the left side, and the PBG chart on the right. 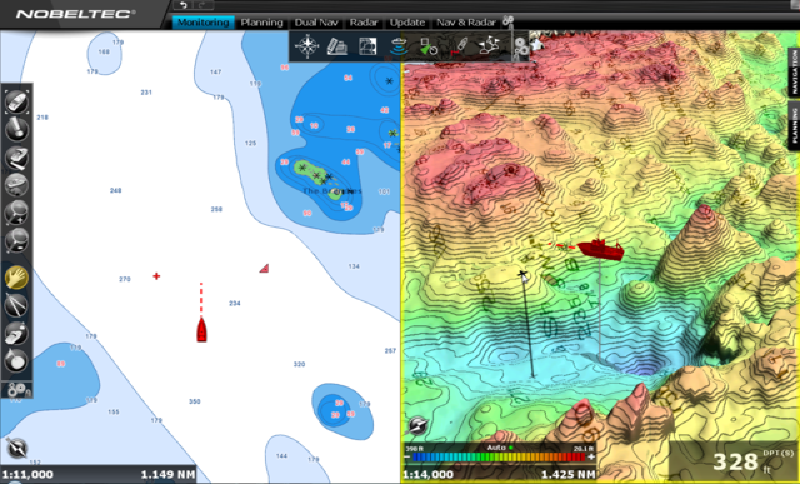 And When it Comes Time to ID certain spots for certain species, wrecks, as well as analyzing on screen what your catch was season to season, month to month, week to week, day to day, HOUR TO HOUR, Catch provides your advanced layer management. This is the most useful tool of the entire software, and even justifies getting the program even if you do not have or plan to add a Furuno MFD, Sounder or Radar. Visit the link below to see a high resolution shot showing the Layer Management display, and you will be impressed.

Here is the link to the Catch site at Nobeltec. Nobeltec Navigation - Catch

Also be sure to check out Trident, which is a scaled down version of Catch that provides the ability to add certain 'Plus Packs", eg the Furuno Radar or Furuno Sounder Plus Pack, which provide the ability to integrate existing Furuno sensors to be viewed and controlled via the PC, as well as the Koden Plus Pack, which enables you to use the Koden RadarPC for someone looking for a complete standalone system.

I hope you all take a look at this software, as I wouldn't be so passionate about something unless it truly blew me away, and this program did just that.

Feel free to ask any questions, be it system requirements (this program requires a solid system, preferably with a dedicated graphics card and with at least 2 GB of RAM.) Post your PC's specs, including processor type, RAM available, if you are unsure. If you don't know that off hand, just right click on the My Computer icon, click on properties, and all the info will be right there. You can also download and install CPUID CPUID - System & hardware benchmark, monitoring, reporting and post what you have. It's always a good thing to know what's "under the hatch" of a PC. Personally, I'm an AMD/ATI guy, but Intel has done well with the new i-series and SandyBridge chipset.

Enough of the Nerd-Speak, I implore you all to check out this software, and if you have any other software program you run, feel free to post certain features it has and how it compares to a program like Catch. I'd like to hear all kinds of feedback. Thanks for reading!
Last edited: Nov 15, 2017
T