Groverbuilt 26. From LINY. Not from a woodie, I think.

Nice to see the old designs get a new life

Nice. They are cool boats!
P

stumpstalker said:
Any idea of location, boat name, or owner? There are legible numbers for a good investigator.

Is it a staged photo? He's not really hauling pots; his punt is alongside.

We know it's in Maine: there's a fog bank in the background.
Click to expand...

the photo had no description ,only the photo as shown

Super story; sad; several lessons there, and thanks.

Peter Brown raises a good point, that I am reminded of every time that someone on this forum asks what hull is more stable “on the drift”. The point being, what is more stable in a moderate chop, drifting, or at anchor chumming for Tuna?

Is it the harder-chined, flatter hull shape, with more “bearing” aft; or the rounder bilged boat?

In those moderate conditions it is the flatter hulled boat.

Conversely, what is more stable in extreme weather (when you couldn’t be fishing anyway) is the exact opposite: Rounder bilges, so as to be less “quick”, side-to-it, and more resistant to being “tossed” as would the hull with greater “bearing”.


The trade-off is that the round bilged boat is more susceptible to shipping water (which is what washed the crewman out of the wheelhouse who was lost on the SEA FEVER), but it is less inclined to capsize.


Still, it was tragic that one man was lost. But the SEA FEVER and her remaining crew survived; and the FAIRWIND, of flatter hull configuration was lost -- pitchpoling, to be exact -- with only one crewman surviving, the rest her crew being lost in the storm.

Before NOAA and weather tech of today, boats (motor boat in particular) where designed to be caught in bad weather. So there was a good reason for their design. Allbiet they are typically slower and more dynamically stable them there modern equivalents. The added benefit i really love is that the lines of older designs just look nicer, smoother, more apealling

That being said, folks get caught in bad weather a fraction of what they used to, so boat designs have become more acceptable to the consumer (better on a drift, more static stability, faster, etc…..)

Nothing wrong with either hull design types, but everyone has to choose between the two. Sort of like arguing about who is prettier, Marilyn Monroe or Audrey Hepburn. Just different types of pretty.

None the less, it always comes down to how you plan to use the boat. If your a Baymaster, slaying fish 5 days a week, nice flat bottom boat is the best. But always paying attention to the weather and bowing to the weather report. You wanna be a “Hurricane Runner” running offshore on your own schedule, round bottom girls are the way to go, lmao

novivin said:
Groverbuilt 26. From LINY. Not from a woodie, I think.
Click to expand...

The New Rochelle, NY Marine Police have a decommissioned Grover sitting in their storage facility.
C

Sorry for the picture of a picture. My buddy gave this to me. He collects and sells old international truck and scout parts and memorabilia. He said this was from an early 1950’s sales brochure. 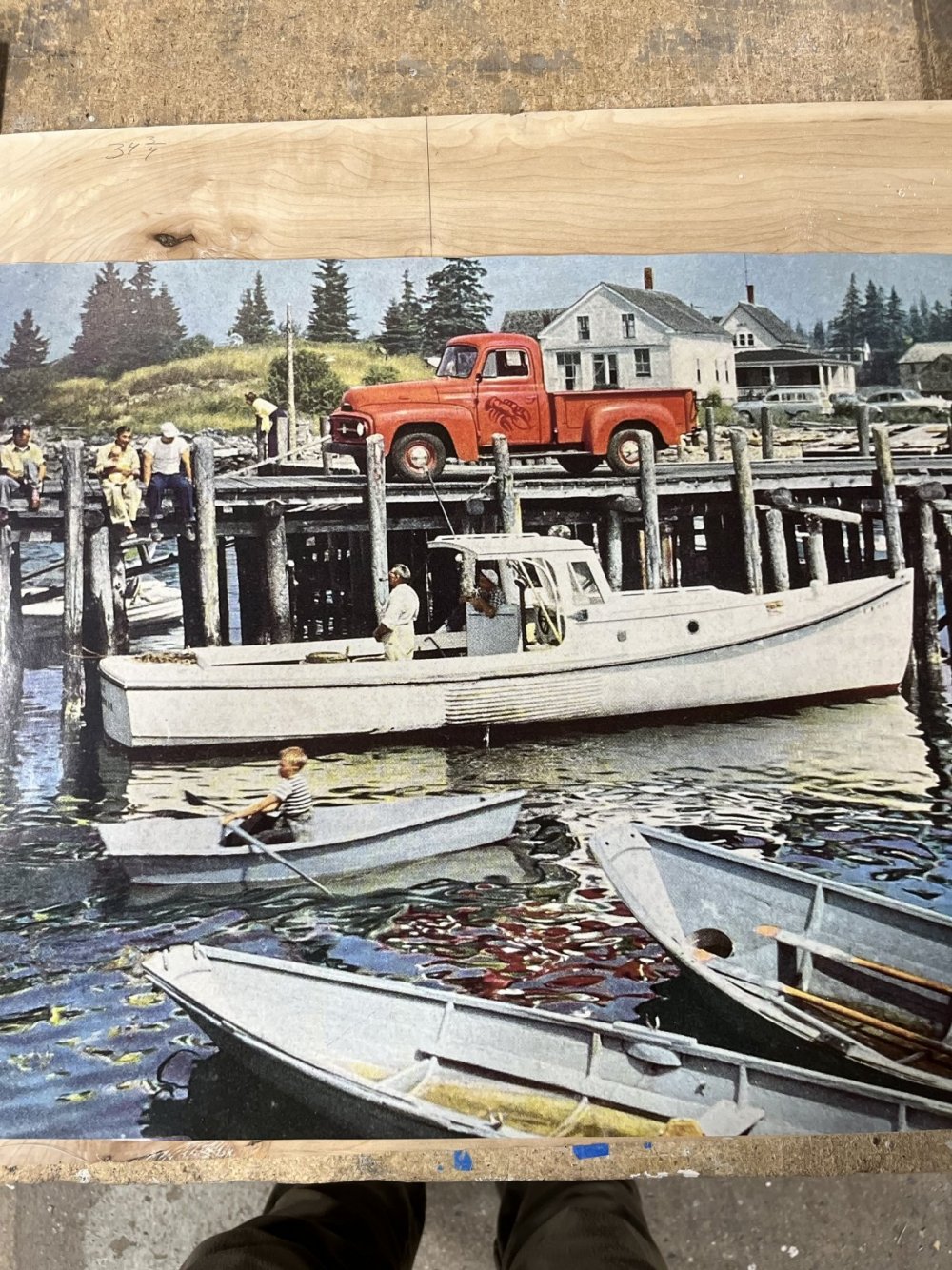 That all depends on how many drinks they've had while sitting at the local gin joint staring out the windows!

I have long held the belief that the evolution from round bilge to flat stern had more to do with speed and certainly carrying capacity. Fisherman increased pot numbers requiring larger aft loads for fewer set trips. If I recall correctly, in Gardner's "Boats to Build And Use" it was as early as 1947 that the vee hull in lobster hulls appeared in Marblehead. I'm not a naval architect but have followed this type of hull development. Since their descendance from sail, the hulls have always continued to evolve. The modified Vee with a flatter rear section and attached keel(as opposed to "built down" allowed an increase in load capacity and hull speed. In addition, the construction was easier as in some cases only the forward sections required stem bent frames. Eldrige McGinnis used this type of construction in his bass boat (being smaller the forward sections were also sawn. As many lobstermen at the time constructed their own craft, the new type allowed them to construct their own. The professional builder could produce more boats for less. Today its almost all flat stern sections allowing higher placed loads that would overturn conventional hulls in a seaway because of the higher center of gravity (Novi hulls are especially prone to this).
As to safety, it is anyone's choice over hull design, certainly, SEA FEVER would roll in that type of storm and I think the skipper guessed correctly that time.
I sincerely hope the owner puts SEA FEVER back to rights...she deserves it. Looking a the plank lining, its all Aege Neilsen, long plank stakes and somewhat narrow certainly cost more in stock but yeilding a very strong hull.
Sorry for being long winded
ED

I believe that you have the historical hull changes and their influence on seaworthiness vis-a-vis utility right. My only question is about the 1947 reference to vee-bottom boats out of Marblehead.

Could you be referring to the innovative design for a large offshore Lobster boat drawn by Ray Hunt, which was used for the PRELUDE, launched more in the vicinity of 1967?

Here is a photo of the SEA FEVER, courtesy of the Penobscot Marine Museum, which looks to me like it was taken at the time of a post-launch sea trial.

That the SEA FEVER is a boat of singular historical import is certain; her fate now evidently is not. The "Honour Brown Storm" of 1980 did not bring about her demise; dereliction as she sits on the shore may do so now. 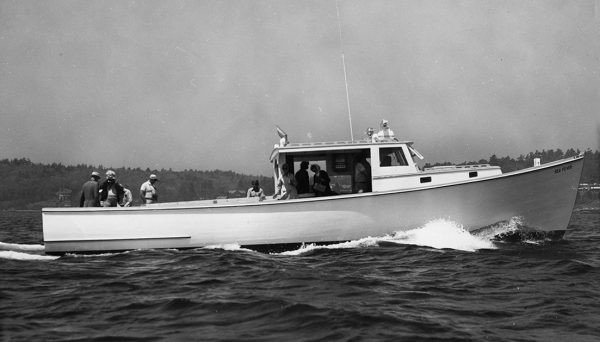 Great photo.... thanks, if she's on the hard, where is she?
Enclosed are the lines of the "M-2" a designation from the U.S. Naval Academy testing lab.
A Frost built type "M-1"(please note these tests were done after the boats were constructed and in use) landed in Gloucester in 1946, and in '48, Justin Hull built one for a fisherman in Beverly. Hull's earliest VEE dates to 1918. I'm beginning to believe that this hull shape was being influenced by such high-speed builders as Hacker (1908) but have no proof. By the 30's with rum-running in full swing the VEE was in full use both legally and in other pursuits.
As you'll note the M-2 has no curved sections but sports a pleasant bow flair with a fine entry.
If the lines for the SEA FEVER are around I'd would like to get a copy and make a half hull
Ray Hunt, certainly a proponent of the VEE, was instrumental, at the date you give, in the straked or stepped bottom, Giving the Bertram 31 its place in history.

You indeed provide references and a drawing of vee-bottom boat designs going back to the early 20th Century, let alone 1947. That’s all good historical evidence.

I have been aware of the existence of some of those from the drawing boards of New England marine architects, such as William Hand and Ray Hunt. Attached below is the 28-foot HuntForm that was our family boat, bought used by my father in 1953. Beached she shows the vee forward, and is flat aft. If she had more than the 115 horse Chrysler Crown that was in her she could have been fast. 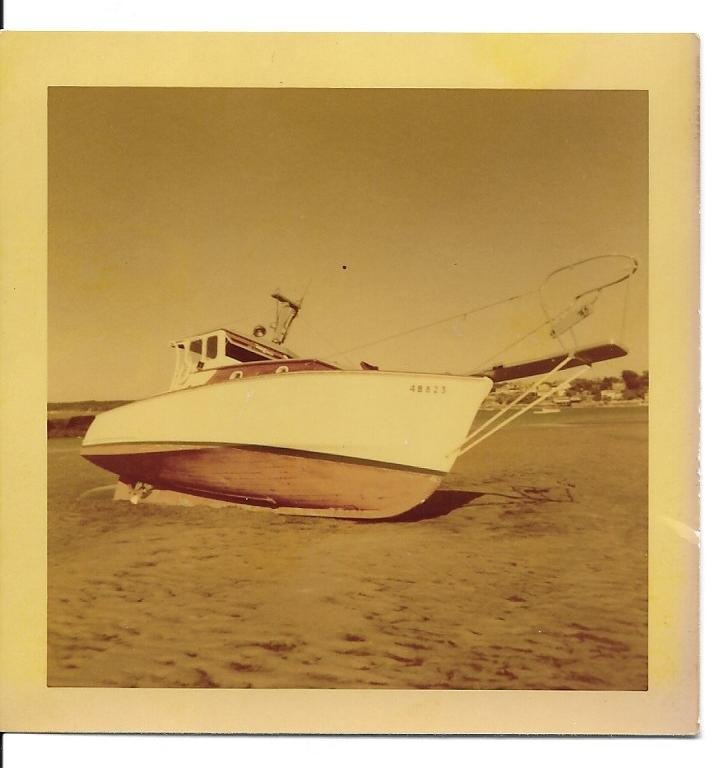 Very interesting design especially that hard chine development and sporting a keel cooler to boot. That hull really shows an attempt at increasing the speed. I think the chevy 230 cu. in. and the 292 truck engine were around then. One can only wonder what they would have produced for speeds. At Green Harbor in Marshfield, there was an Eldridge McGinnis bass boat the "Sassy Lassie" that had a souped-up 6 cylinder Chevy 230, that was very fast.
Thanks for the picture! With your permission, I'd like to copy it

I have no objection if you would like to copy it.

Thanks for your interest.

Re: Firm vs. round bilges conducing to greater or lesser seaworthiness, and old boat photos to illustrate the difference:

This issue reminds me of an article in the MAINE COAST FISHERMAN magazine decades ago about the 60-foot Novi Long-liner model that proliferated with Canadian Loan Board support in the early 1950s. In the title of the article was the phrase, “Safety vs. Economics”.

The model was basically an aggrandizement of the traditional 30-to-40-foot Cape Island Novi launch, which had proven itself inshore over many years Lobstering; line-trawling for groundfish, and in the harpoon Sword-fishery.

The interplay of safety and economic viability will always exist, in boat design, as well as life in general.

The question about the relative safety of these boats arose after three (3) Lockeport, Nova Scotia 60-footers went down in the same gale in 1961. The vulnerability of the forward deckhouse to being smashed by green seas when “going into-it” was cited, and the flatter hull shape below the waterline, compared with the aft-placement of the pilot house with a typical Eldridge-McInnes-designed 60-foot, rounder-bilged, Eastern-rig-style.

Illustrated below is a 60-footer, the JOE BOOK, a very successful groundfish long-liner and Swordfish harpooner, and for comparison an Eastern-rigged vessel, the ADVENTURE, also very successful, designed and built for the same fisheries. (Photos by E. A. Whynot)

The third illustration is of drawings used in the article, and later for a marine calendar. It includes the two hull types in question – dragger vs. longliner -- drawn by Samuel Manning who both illustrated and wrote the referenced article 60 years ago.

Both were proven hull designs in rough water; but are the sea-keeping abilities in extreme conditions equivalent?

In moderate weather, the Long-liner was typically very stable when laying-to at night, with the flatter hull shape, aided by the spanker sail.

The ADVENTURE, in contrast, was notorious as a roller, like a bottle afloat, albeit ballasted, and always righting itself. Reputedly, it was a constant but easy roll.

Draw your own conclusions, and there many factors to consider, some material, others human; but in the same gale that sent the three Lockeport 60-foot long-liners to the bottom, the ADVENTURE survived, with her older-styled, more sailing-vessel shaped hull, without so much as overturning an oil drum lashed on deck. 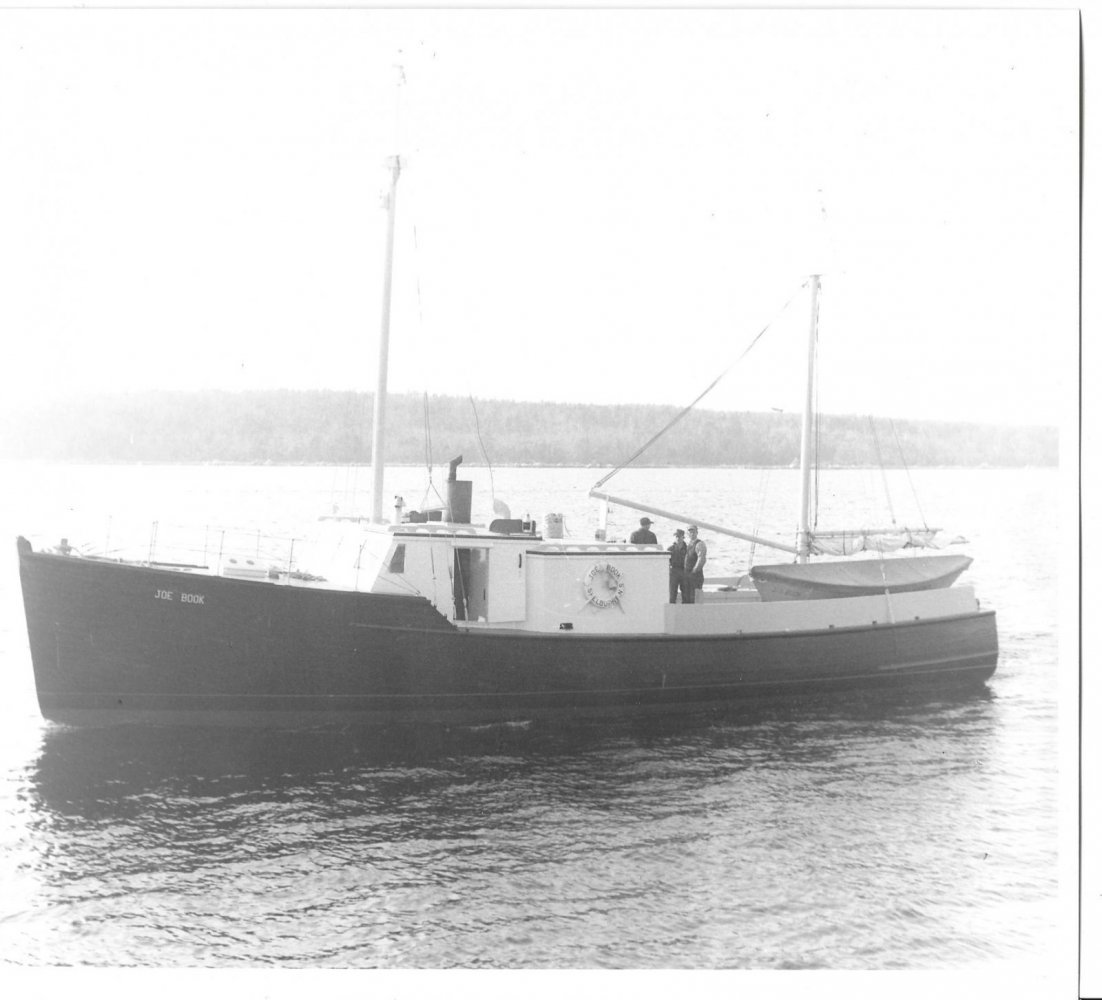 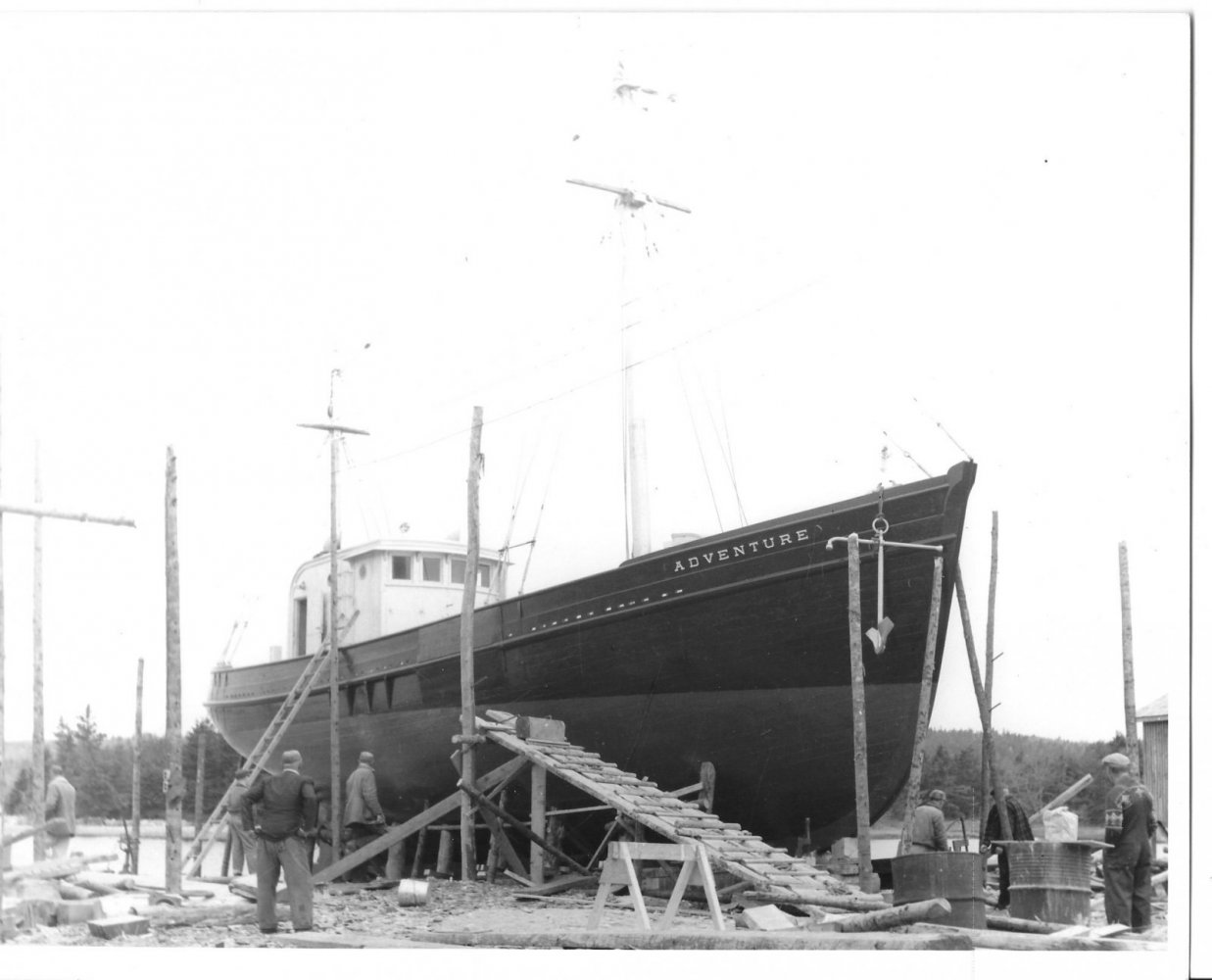 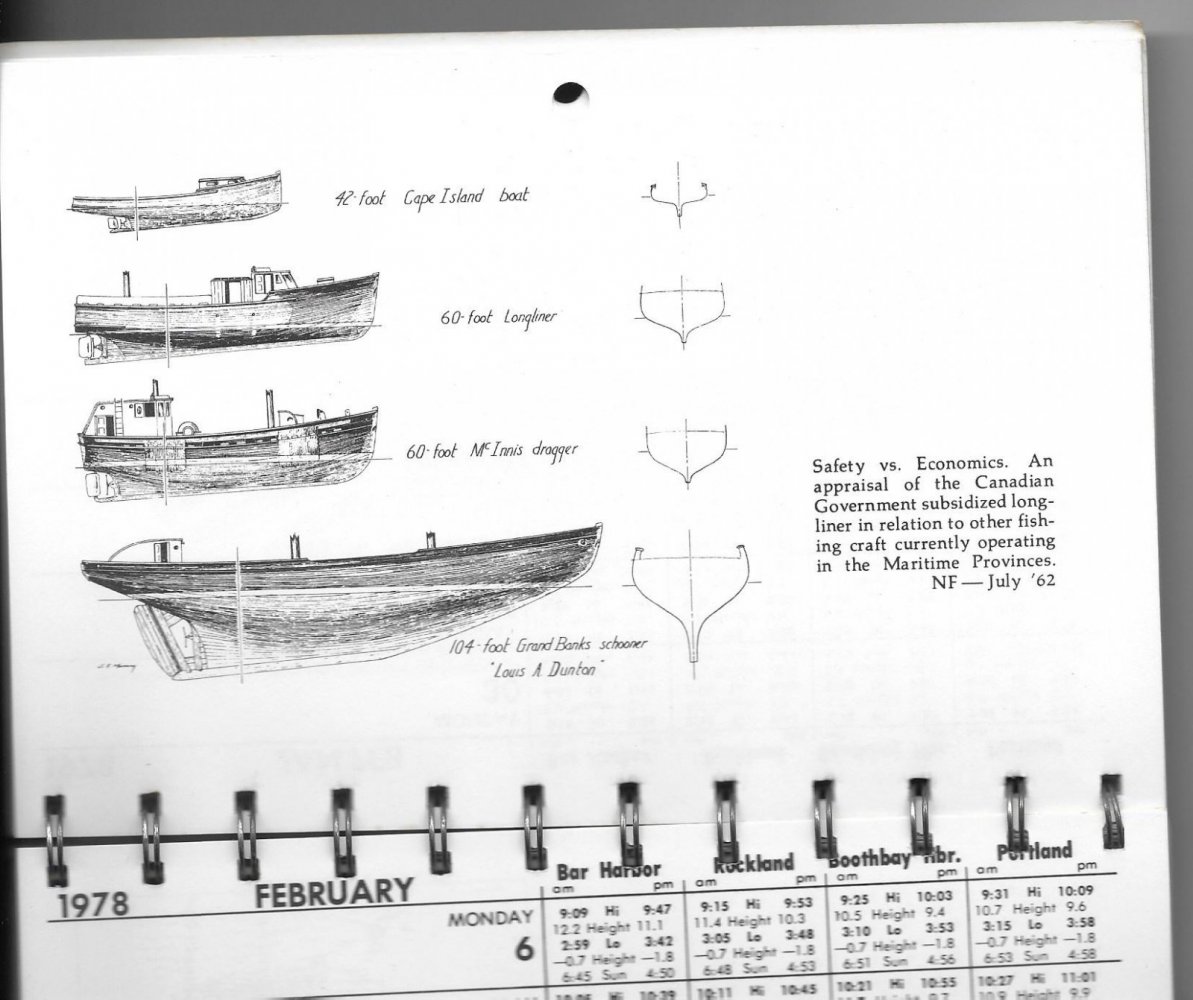 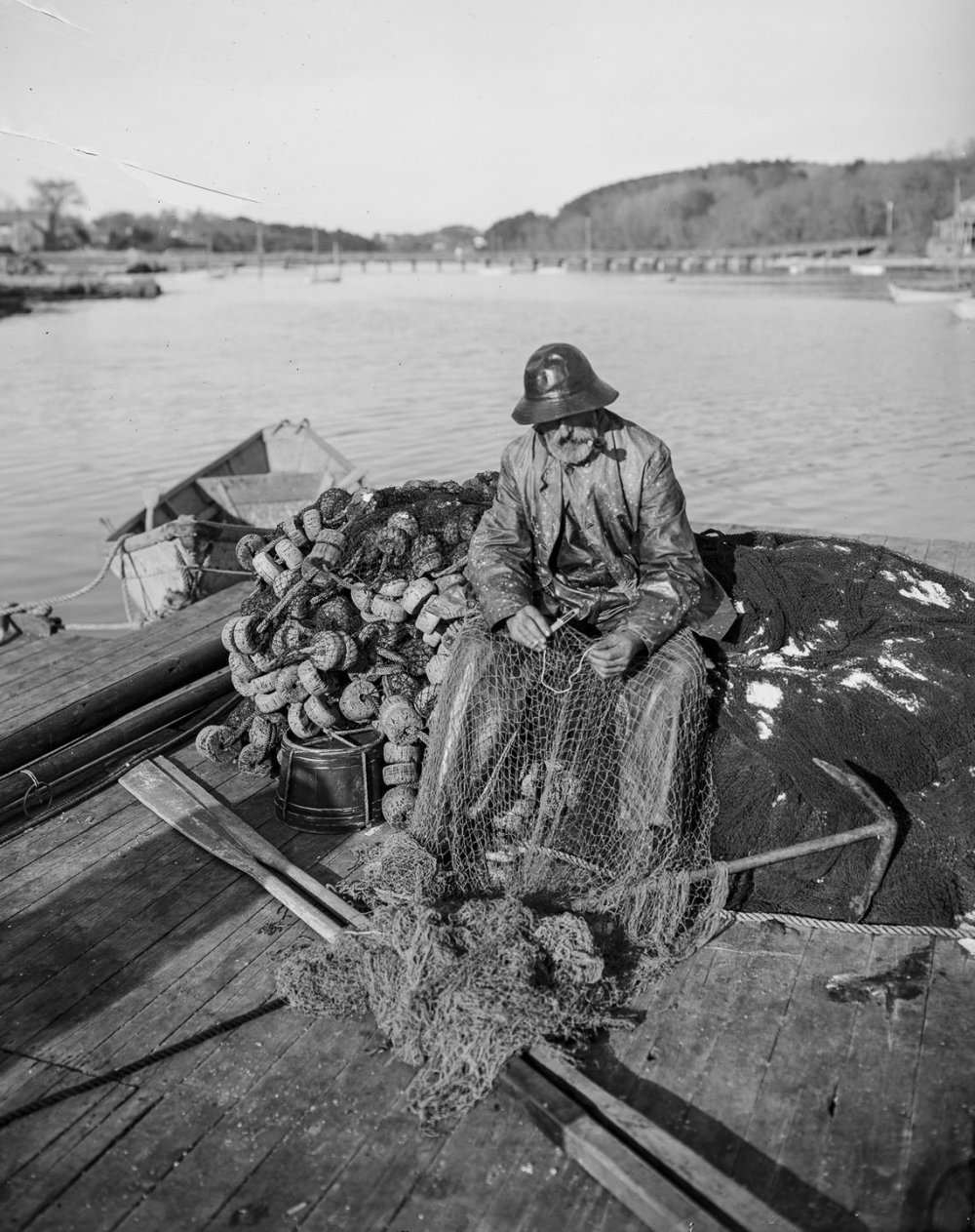