Old school electronics that get the job done

What's the best old school GPS and sounder that you guys recommend .. A few local fishermen swear by the north star 952x., what do you prefer?

and that Northstar
E

I feel that a very good fish finder is most valuable to me. I have a furuno nav net and am happy with it. Not super high tech but it works for me.

Wasnt it a Garmin Chart plotter that Paul on Wicked Tuna was calling a POS last night sorry I couldnt resist.

all old stuff on my rig furuno 292 fishfinder, northstar 952, furuno 7000 gps/sounder combo came with boat, only thing new is the iron mike. 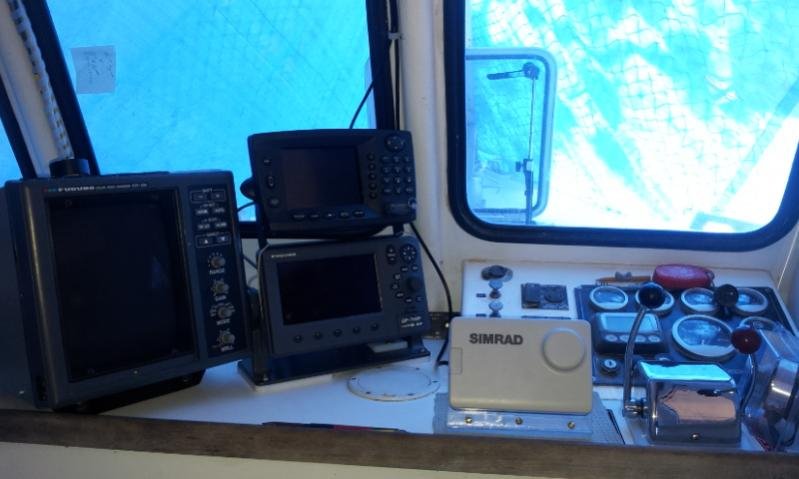 MASTERENEGADE said:
Wasnt it a Garmin Chart plotter that Paul on Wicked Tuna was calling a POS last night sorry I couldnt resist.Yes it was. Too bad that muffinhead ran aground and blames the electronics....that was wicked Pissah!!!
Click to expand...

Yes it was. Too bad that muffinhead ran aground and blames the electronics....that was wicked Pissah!!!

Thanks I bought a 585 Furuno with a 1kw transom mount x ducer from precision marine last year, looks like a flat screen tv on my midland so I may put that on my t Jason and get something smaller for the center console.... I just want SIMPLE
S

Guys, I have mixed feelings about todays high power sounders and chirp technology. For years, i used a furuno 600 watt machine for giant fishing, with good results in shallow water application (under 250'). Two things that I found superior with this machine. It gave me more COVERAGE. The transducer that was paired to this machine was a common 50/200 khz. It had a 45 degree cone width at 50khz and @ 20 degree cone at 200khz. Therefore, my shadow line at 200' was twice what it is today using a 1K MACHINE. I PERSONALLY LIKE KNOWING AS MUCH INFORMATION OF WHAT'S AROUND MY BOAT. It helps especially when chumming in a low to medium current. Granted things like picture quality and sensitivity weren't as good but the Machine Marked Fish. When the target that you' re searching is big, this set up was all you needed for this application. If it wasn't for everyone using high powered machines at these same frequencies, i would still have one. The machine is worthless when you get around a bunch of boats using todays high power machines, the weaker signal is overwhelmed and all you have is noise. Second it was a whole lot cheaper, and Airmar still can't make a transducer for this application that will give you these results in a !k.
E

With all the high tech stuff out there and you can spend a lot of money on boat electronics but if you do not know how to operate them.
For me simple is best.
My north star, you put the numbers in, hit enter and your off.

How about furuno gps 30. loved that unit,go to/enter all day long

This was on my boat when I bought it. No spare paper rolls though so might not be good for you Its about 14" square x 8" 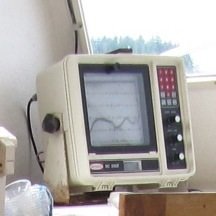 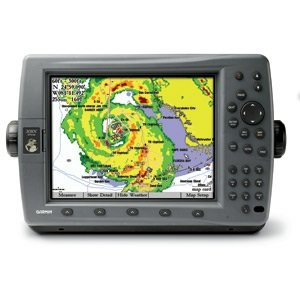 It's been way too long since I've been able to post, between some family stuff and the business, BUT I am back with a vengeance!! That said, this thread is such a classic that it bears more than a few mentions. First off, let me place a disclaimer that I have nowhere NEAR the amount of on the water or even LIFE experience of the vast majority of members here. I can only comment on what I've seen in my short time in this world, and I would love to see some guys chime in on some of the choices, whether to shit on them or perhaps agree; but most of all encourage all other guys on here to put their 2 cents in on their choices.
I'll give a nod to each basic category; plotter, sounder, radar. I'll avoid any 'combo' units as that will open up a whole bag of potatoes. I'll also try to keep the choices to the more economical, more common and popular units rather than the more high end or commercial grade equipment. That's a whole different thread!

So, in no particular order:

Honorable Mentions: Garmin 2x00 and 3x00 series. This was Garmin when they were at their best; incredibly simply, a button for every common function, and unfortunately they decided to get too clever for their own good with their later models.

The first LCD, non CRT sounder that Furuno released with a simpler feel to its operation; compact, knobs for adjusting gain, range, and modes, features that that have become the standard on all of their sounders today. Even at 600W, it still outperforms some of the other sounders made by others, and the best part, they just keep working.

Honorable Mention:
Si-Tex CVS-106 - Bulletproof, great performance, has stood the test of time, and like the model mentioned above, still in use as it was incredibly simple to tune and operate, and I've been personally extremely glad to see Si-Tex regroup and get back to their root recently, putting out some great and affordable machines yet again.

Furuno 1832/1932/1942 CRTs. - I know these weren't as popular as say the 1621 monocrome units or as expansive as the FR models, but these units have been absolute beasts, and up until the end of 2013, Furuno was still selling the 1942MkII variant. Just a real, meat and potatoes radar, very easy to adjust and interpret, bright enough to avoid a hood. Even used these systems still pull some serious dough, and would head to sea in any condition with one of them at the helm; the true test of any equipment.

Honorable Mention: Raytheon (JRC) RXX Radar Series
Nothing spectacular needed to say other than that they worked well (and still do), were made available in enough variations for the small lobster boat to the sportfish, even some smaller sailboats who had some pretty limited choices. All in all, a solid scanner, well supported, and another unit that I've seen take men around the world in some nasty shit!

Oh, and a surprise! One more category!
AUTOPILOT

Robertson AP200DL
In the spirit of the the thread, 'Old School' is the first thing I thought of when I first saw an AP200. The thing looked like an original VHS player (yes, I AM old enough to remember those!) However, the owner let me engage it to try it out, and I was shocked at how well it held a course, and how I was able to even adjust the rudder gain and counter rudder response levels without having to navigate any menu. Since then, I have seen more of these pilots on boats STILL operational than any other pilot model combined. Well, maybe that's a stretch, but you get the idea. So this was in essence, the absolute winner of the 'Old School Get The Job Done' electronics award.

Honorable Mention: Simrad AP35 - Simply the best pilot ever made for an ocean going boat, from tugs to trawlers, the work mode profiles making life so much easier. Also, bulletproof. It wasn't until recently that Simrad was able to come up with a proper replacement, the AP70, which performs to the same standard, not overkill like the AP45 or AP50s, and is incredibly simple to use and is honestly beautiful. Pair it with a satellite compass, and you have the perfect pilot without breaking the bank. (The Sat Compass renaissance is something we will get into another thread, as it is a huge deal now with prices dropping, considering what it provides not only to a pilot's performance, but your radar targeting accuracy and true motion trails, and the heaving compensation for certain sounders),

Hope you all enjoyed this little rant, so until the next time fellas!
- Wharfie :geek:

Think you nailed it with your rant or at least, it's hard to dispute. Every time I read about the new stuff, I get excited and get the "I want it" but common sense kicks in when I just stop, think and realize what I have works and works well doing all that is needed. Still have and use the Garmin 2010C and AP22 lol. knowing the feature's and how to use them is key as mentioned as well as what your needs are. One of the cool things is networking and remote wireless viewing that could make it worth the extra cost to upgrade if you really want to have that feature which with old tech, will cost a lot for another unit or monitors if it can output to one. At some point, repairs will be needed and putting $$ into old stuff will logically force you to update so all you can do is hope it will perform as well and more importantly as LONG!! Thanks Wharf Rat for you opinion from the repair side that we do not see!!
Last edited: Mar 5, 2014

Bill said:
What's the best old school GPS and sounder that you guys recommend .. A few local fishermen swear by the north star 952x., what do you prefer?
Click to expand...

Had that Northstar 952x in my last boat, always worked well but my favorite was the old loran from the eighties that had a sense of humor, if you plugged in a bad lat/lon waypoint and asked for an ETA it would respond on the screen with NEVER.

Tough to beat a Furuno 1650 or 1850 GPS/FF and a standalone Furuno radar. I like bigger screens but these are tried and true units.