Pembroke Skiff Revisited...to console or not; and other deck layout ideas

So I posted this a while back looking for some more info on the builder, etc. I did the transom, replaced the after split bench seat arrangement, fitted spray rails and quarter guards & hung an old Johnson 55 commercial tiller on the transom for now until I figure out what to do with it.

I used the boat last summer for work as a dive and research vessel tender as well as a general cargo hauler, but for occasional island camping trips, etc I've got to get some seats in there.

Some other observations - 55 hp is really overkill or it needs some kind of fins to lift the stern to use all the power. Right now anything over 3/4 throttle is a waste. She's narrow aft and generates very little lift so it tends to ride bow high and pound - which resulted in part of my thinking to put a console in it to move weight forward.

I've thought about an L shaped console for both seating and to help with visibility underway, but keeping this boat simple is also appealing. Bench seats are an obvious choice but really restrict the deck space

Thoughts? Would a couple removable pedestal seats look goofy? Hate to make it look like a freshwater bass boat :shock: 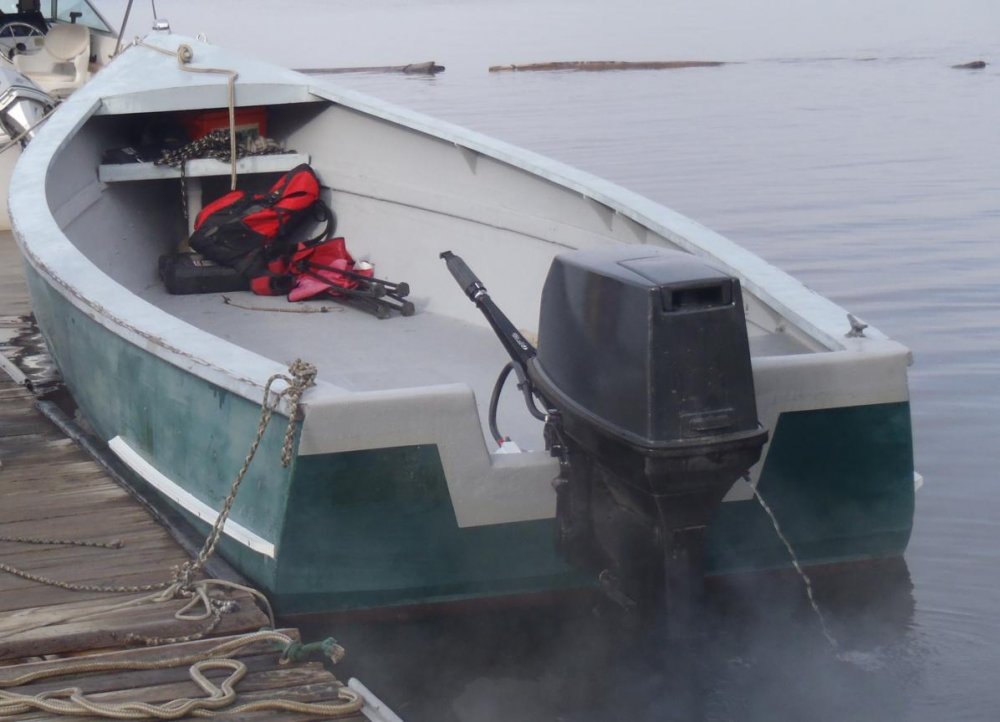 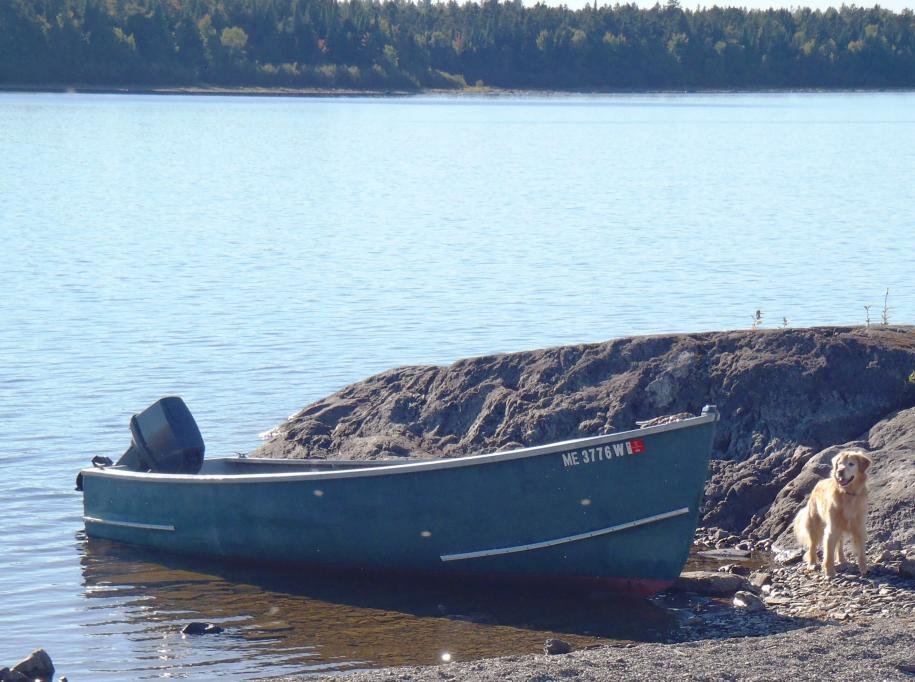 Maybe just a couple beer coolers to sit on

Nice boat...it would be helpful if we had dimensions...and numbers to work from. Got a mechanical drawing of the boat or something we can look at?

What's the beam inside the gun'l at amidships, for starters...?

I REALLY like this boat. Is it self bailing ?

I don't have any dimensions for you as I'm out working on a tug until Wednesday. I'll certainly take some measurements, though.

No drawings or really any information at all is available about the builder. I can say that she's laid up pretty heavy & has a 4" keel that runs the whole length of the boat. This was their "commercial" 19' model.

The sealed deck MIGHT be self bailing depending on the weight of the engine and whatever else (console, etc) might make it's way on board - it currently just has a standard centerline 1" drain plug that sits right at the water line with the 55 Johnson (190lbs), two 6gal fuel tanks under the split benches and nothing else in the boat.

I like the hull so much that I'm seriously considering scrapping the whole workboat idea and turning it into a really nice recreational lobster/fishing skiff. I get comments about this boat everywhere it goes.

Worthy project. I like your boat a lot. Let's see some more pictures. I'm finishing my boat this coming Saturday maybe you can get some ideas off of that. I'll upload the pictures next week.

Bring it back to MMA and let the students whip something up!
J

Maybe you can build up a small wedge to help lift the stern. Lovely boat.

Boat looks perfect the way she is, The boat has character. You go paintin and pimpin' her up with a console and those fancy rod holders, she will just look like every other center console running around Penobscot Bay.

Might as well start wearing Docksiders and white pants now

RKrough said:
Boat looks perfect the way she is, The boat has character. You go paintin and pimpin' her up with a console and those fancy rod holders, she will just look like every other center console running around Penobscot Bay.

I do understand your point - but - The problem becomes when the "rough beat up poorly maintained Maine lobeterman's skiff" look no longer does the things you want. It would save me a lot of money to hose clamp on a 4' PVC pipe to the tiller, stand up hang on to the bow line and have the girlfriend sit on a 5 gallon bucket when we want to go camping, etc. Keeping the boat uncomfortable just for a look is no different than making it all pretty and Bristol finished to impress the summer people from NY at the town dock

I have a bigger boat for some of the other work I do and general cruising around, but thought I could set this up in some way to work as both an inshore recreational boat to explore around and still have utility - that's the reason for the thread.

Do the double knee Carhartt's come in white??

Towboat said:
Do the double knee Carhartt's come in white??
Click to expand...

With the problems you are describing (bow high ride), the weight of a center console with a swing bench seat would help. You can construct one out of plywood and glass it yourself. A bench seat with a cooler underneath will give you some storage and a place to sit comfortably while using the boat. If the boat is not self bailing now at rest, this will not help that problem. You can always raise the sole (floor) and put in scuppers higher. Small boats sometimes need trim tabs to get needed lift at the stern to deal with the bow rise issue. I just bought a pair of stainless steel Smart Tabs for my boat. I haven't installed them yet, but I'm hoping they will help. I've done a lot of research on them and they seem to help a great deal for economical, self leveling trim tabs. They work on nitrogen gas actuators instead of hydraulic or electric. I'll keep you posted on performance when I get it out on the water.

Yeah add a console, ETEC her and put a ton of fuel under the forward bench seat she should balance right out. I got a 40 gallon tank for my 17 Leblanc to offset the 90 Evinrude ETEC. Both are 320 we'll see what happens

I personally like the utility of a tiller steer skiff. I always ran mine with the reverse pin out of the engine frame as I like trolling worms in the rocks for bass at night and the motor has to be able to drag. That and hitting the local sand bar when its just awash to clean the bottom once or twice a year lol

Get an ETEC for some real torque and put some weight on that bow...!
J

I'm a tiller fan too
D

One BIG thing to take into consideration is that if you put a console on the boat, the boat will feel half the size.
P

I just bought a "Novi skiff" and am thinking about the same things as you. The pic at the bottom is my new boat. Not sure if it is an early Pembroke or what. It is solid glass, built in 1964. It has a 25hp ETEC - goes like a dream with with 3 adults (planes easily and moves along at 15 knots) I think a 40 hp ETEC would be ideal? I am very satisfied with the ETEC though, and wouldn't mess with anything else from now on.
The top photo is of a Sailing coach boat I designed the layout for. It's an Alton Wallace 16'. Similar shape hull - little more tender in the chop though. Console is designed to sit at normally, or stand at higher speeds. Off center to create more space for passengers. Bow seat nice and low for a cold sailor to hide out of the wind. Fore and aft thwarts good for stepping on board from the dock, and carrying passengers short distances (not planing) . Only meant to go fast with 3 people.
We have been just using camping chairs for harbor cruising in Rockland. I am leaning against building out the interior at all, and somehow adding removable seats or benches of some sort. I spent all my boating time with my last boat fixing the frozen steering repeatedly, replacing starter and electric cables from battery to starter, taking apart the remote throttle to service it, cleaning Carbs etc. I really love the tiller for the simplicity. I saw that set up all over the developing world while cruising. It keeps the boat doing what it' supposed to be doing; not sitting in my yard waiting to be fixed. Look forward to seeing what you find the ideal HP, seating solutions etc. Also, I come to MMA often for coaching, so I'll keep an eye out. -Pat 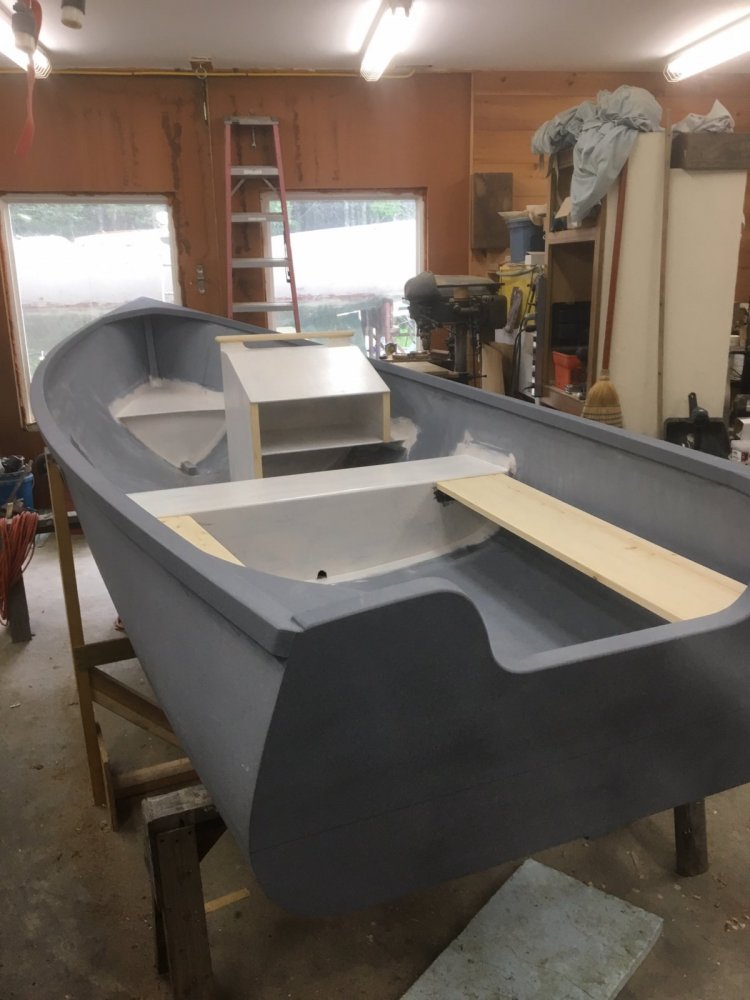 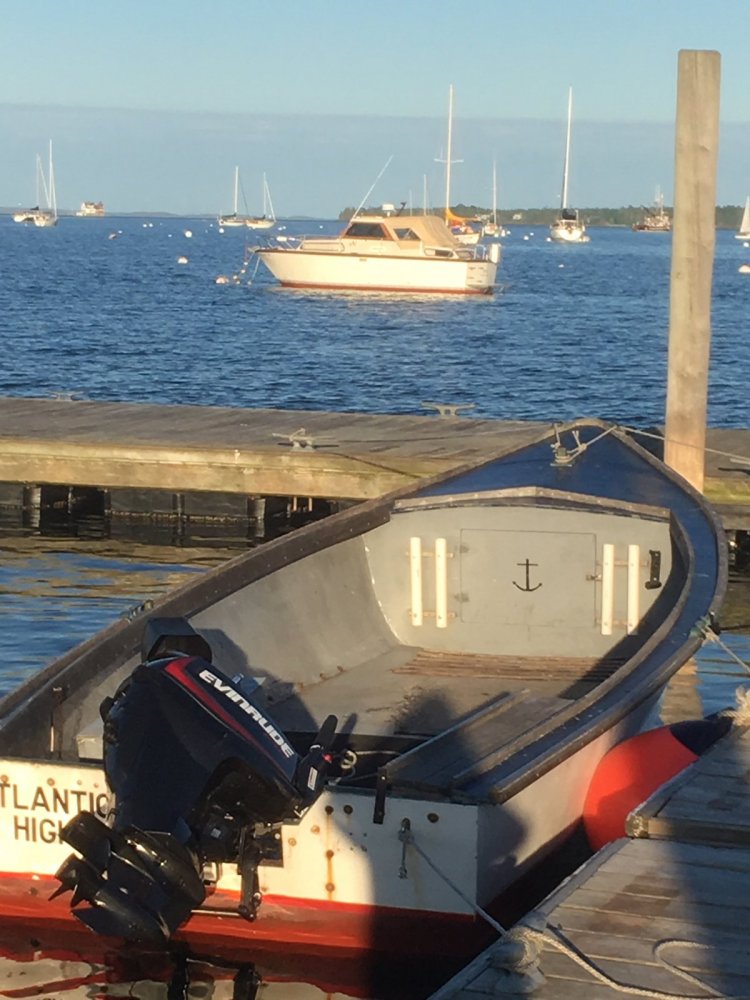