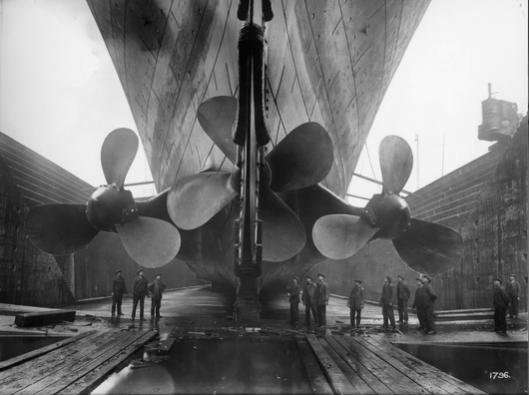 What the difference in cup design??

I know what it is, but how does it effect what is going on with the prop??

Aren't there basic guidlines about what type of cup you can put on and increase or decrese pitch and diameter in relation to the cup??
C

Cup is similar to pitch only it is just on the edge of the blade. Cup is added in numbers from 1-9. A good propeller shop when they recon will usually stamp the wheel such as 22 x 22 #4 meaning a four cup.

Cupping is good to help quiet a wheel down if there is close bottom clearance or if the wheel needs efficiency help to hold the water onto the blade longer.

Cup is not free and it cost you load which slows down RPMs.

Many times in tuning a wheel to get adjusted RPMs cup is added rather than re-pitching the wheel.

The less you re-pitch the better and cupping is a simpler and easier way to adjust RPMs.

If you want to lose RPMs add cup to gain RPMs reduce cup.

A good propeller shop should be able to sell you the wheel you need within the 1 Once done you can tune a little with cupping.

On my JC31 they hit the wheel right on with a 23 X 21 from the factory. Once seatested and loaded I had a slight over turn of about 50 RPMs. Rather that fool with pitch a #3 cup was added and it was spot on.

The photo is my Class I nibral 23 x 21 #3. You can barely see the cup on the edge but it is there. This is what a wheel should look like the start of every season. 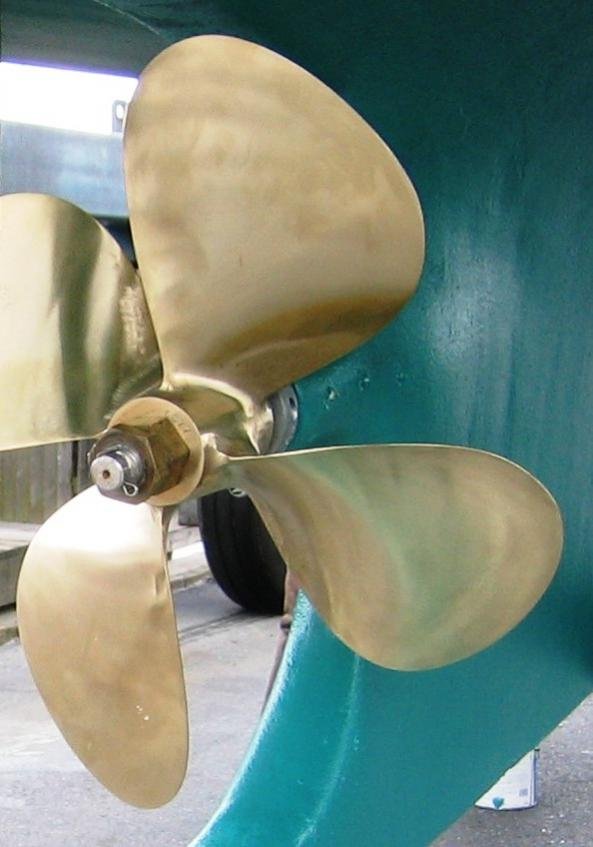 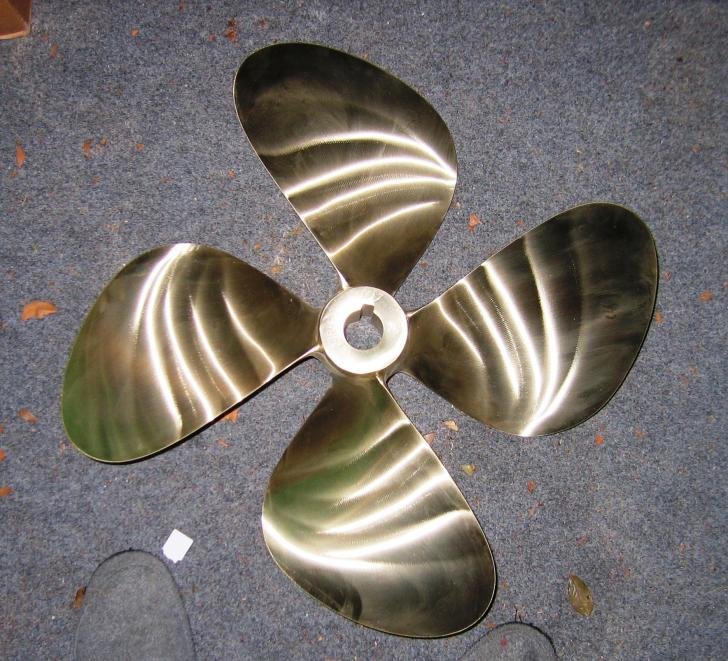 Larry whats your feeling on wether or not you loose speed with cup? Meaning if you add a #4 cup you cold probably add an inch of pitch with the increased pitch would have more foward movement. On my NB the added cup brougt the bow higher out of the water, not sure if that is normal or not but both my 36's acted the same way.
C

Cupping is for a 30 to 50 RPM problem. Pitching is for a load problem in excess of 100 RPMs or more. You do not correct a 100 RPM problem with cup, that is for pitch to do. A 100 RPM or better load factor must be carried by the entire blade and not just the edge with some cup. If you cup to correct 100 RPM the load on that edge will weaken and start to flatten out the cup over time.

Cupping does increase bow raise on N/E boats. The reason being is that without cup the water flying off the boat hits the bottom hard and gives upward thrust which lowers the bow. With cup the water is thrown to the side and it allows the stern to sink into the void caused by the water loss.

Back to your N/B what size wheel & how much cup? A #4 cup is about 1/3 of pitch. Give up your numbers and we will kick this around.

N/B I think is a 28 wheel, pitch is nextwhat is yours?

We added cup to the old boat for lift and added to this one because it worked the first time and I didn't want to redo the prop again.

The difference in the 2 engines is I could have run that 122p from the ocean through ocean beach back into the bay and the rpm would not change the whole time! lol that motor was a beast!
C

Great speeds you are where you want to be.

Would a 3 versus 4 blade prop be the same on an outboard?
T

[email protected] said:
Would a 3 versus 4 blade prop be the same on an outboard?
Click to expand...

3 blade vs 4 blade is definitely not the same on an outboard. You need to drop down in diameter and usually pitch when you go to a 4 blade. A four blade is great if you are pushing a load or want more consistent numbers at cruising speeds.

Tunascapes said:
3 blade vs 4 blade is definitely not the same on an outboard. You need to drop down in diameter and usually pitch when you go to a 4 blade. A four blade is great if you are pushing a load or want more consistent numbers at cruising speeds.
Click to expand...

Thanks for your reply. I have a SISU 22 with a 115 OB and I am turning too many RPM's and having trouble getting the bow down. I am thinking tabs or trying a different pitch propeller.
T

I would tweak the prop and get it right with the same number of blades as you are currently running and then think about switching. Props really can be confusing some times and you need to have one that works right so you know how to change it.

I have always run a seaway boat that is similar to your sisu and tabs are a must. You will be amazed how they help.

Thank again for the insight. You are on a long list of people who told me tabs are a must.

Time for a new prop on my Eastern 31, it is a John Deere 6076 AFM 30 rated at 300 HP with a TD 1.77:1 Max RPM is 2400. Hoping to get a little speed ie: honest 15 knts cruise with full charter. Currently with the deck and foamed in tank out, I believe we will reduce the weight of the cockpit by about 800 LBS. We are going with Fir 2 X 4's as stringers and 3/4" Bluewater Nautical 26 Coosa Board. The fuel tank is out being fabricated now along with the new Wynne windows. Lots of changes and very excited about the upgrades.

I lot going on I see. 800 pounds out? Sounds like a lot of weigh. If that weight is correct she may be a little bow down at rest. New tank placement may need to be researched to make up the trim.
What size propeller are you spinning currently? That will help figure this out.

This should give you about 75% wheel efficiency with the following numbers:

If you drop to a 23 X 21 with reduced pitch you lose a lot. If you keep the pitch & drop the Diameter to a 22 you will lose your 75% efficiency and lose more speed.

This is my best guess without have your current information. Lastly before you start to wheel your boat always photo tach the motor, check the high speed governor with the photo tach at no load & change all fuel filters for maximum fuel flow performance before sizing the wheel.

Larry, I will let you know what we currently have, no choice but to have the fuel tanks where they are with placement. Yes the 800 LBS is a lot but the boat has been changed dramtically over the years with the removal of the Flying Bridge and the Galley changed to a Seatee. Whoever buys this will get a good boat just like yours and still can not believe yours is still there as it is the best 31 out there and the low price is a steal.

Thanks DaveShe is turn key & ready to go. I am selling her in her prime and hope the new owner keeper her in the condition that she is used to.

If you give me your old wheel information and we already have the weight loss I think I can compute your wheel pretty close. I enjoy doing the math with my back yard method. In fact I think I am within 1 already.

I like the idea of the cold tar coating it looks pretty easy. What is the plan for securing the tanks as it seems like foaming is the swan song for metal tanks.

yea hale propeller told me that to mine were on backwards on my 34 wayne beal when i got it to.
C