I am thinking of replacing the engine in my old FL boat (not my Bruno DE so please excuse) I would really like to retain my current prop & gear and use a 4 cyl diesel, non electronic. I have been getting some conflicting information from manufacturers.

My question is this: Can't I select an engine that produces [email protected], limit my rpm's to 2000, and not worry about what the hp is at max rpm's. I have talked with Beta, JD, & Westerbeke and they all have some reason why this won't work and will void the warranty. For the life of me, I don't understand why. I need some common sense knowledge. 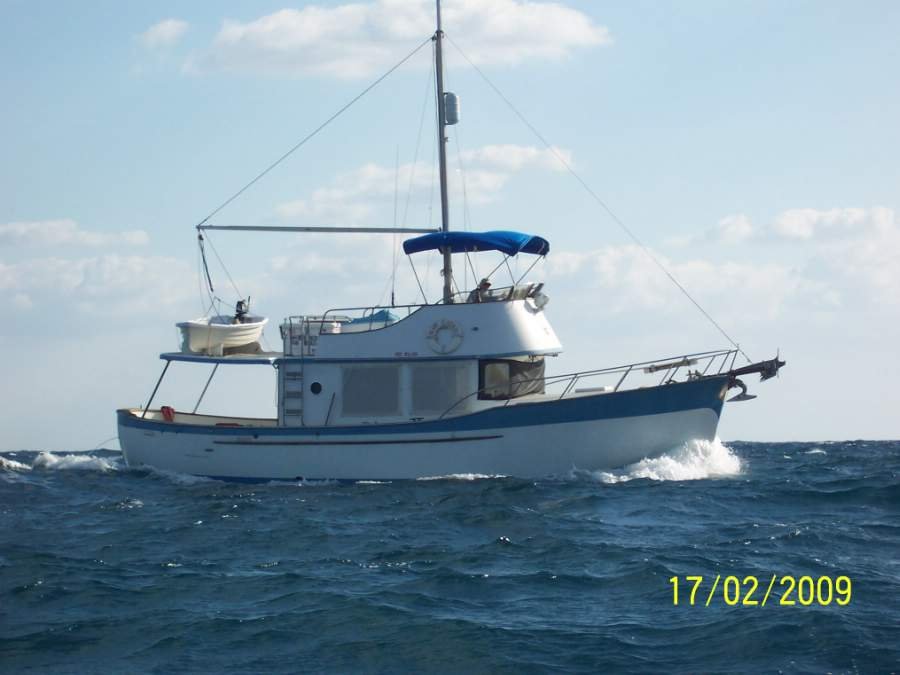 Odd repower question. But interesting. If the motor you select is maybe only 10 HP more or so then I think you can use your current set up. Any new diesel install gets a sign off by the manufacture. The most important part of the sign off is the WOT test part. At WOT the motor must get the maximum rated RPMs at the same time that the governor kicks in.
WOT runs on diesels are important to test many things such as load, temperatures and performance.
If you were to do what you want & only use 50 HP & 2000 RPMs you defeat the above. In addition should you use the WOT mode your motor will pass the governor RPMs & it will not achieve maximum load. Plus the odds of a shaft snapping or your little 2.6 gear failing go way up. Not a good combo.

The Old Fl boat....is that a Willis or Willard??
You have great taste in boats!!!

Captainlarry is absolutely correct. The manufacturer wants to see the engine make rated rpm in gear. Dropping a 75 hp engine in your boat even though it might turn the current transmission/prop to 2,000 rpm, won't make rated rpm.

With the Beta you might get by with their 2.94:1 transmission and cutting down and repitching your existing prop.

All of which will probably be cheaper than the extra cost of horsepower you can't use.

Dr Dude said:
The Old Fl boat....is that a Willis or Willard??
You have great taste in boats!!!
Click to expand...

djmarchand said:
Captainlarry is absolutely correct. The manufacturer wants to see the engine make rated rpm in gear. Dropping a 75 hp engine in your boat even though it might turn the current transmission/prop to 2,000 rpm, won't make rated rpm.

With the Beta you might get by with their 2.94:1 transmission and cutting down and repitching your existing prop.

All of which will probably be cheaper than the extra cost of horsepower you can't use.


Thats basicly what they said, "if it can't turn up to full RPM at WOT then there is no warranty". Narrow minded I think since I am willing to buy a 60-75hp engine detuned to 45 or 50hp.

The extra 25 HP that you don't need will cost you as much as a new tranny and prop. Sounds to me that you are just being stubborn!!!

djmarchand said:
The extra 25 HP that you don't need will cost you as much as a new tranny and prop. Sounds to me that you are just being stubborn!!!


Who me.. stubborn??
You may be right. But I just love my old slow turning engine and don't want to listen to a new screamer. On this boat you can carry on a conversation like sitting in your livingroom and on the bridge you can hear nothing but the rush of water off the bow.
I'll probably replace it with a rebuilt Perkins and switch to a 3:1 transmission. I would just like to understand more.

OK, admitting a problem is the key to a solution ;-).

To get a normally aspirated engine that would work it is going to take a rebuilt older engine. Either the Perkins or the Lehman 6 cylinder would work. But do you really want to put a 40 year old engine design in your boat.

So back to the Beta 50. 95% of the time you say you need no more than 20 hp. That will mean running at about 2,100 rpm which should be a nice leisurely pace for that engine.

I would take a Beta 50 under these circumstances over a rebuilt Perkins or Lehman any day.


Our mooring neighbors had a Willard 39' for many many years until he got too old to pilot her. They went all over the NE on that boat.

By the way, Westerbeke, overnight, just derated their 55 to below 50, it still does exactly the same thing in the rest of the RPM range, it just doesn't rev high enough to make over 49hp. All with the turn of a screw and you still get a warranty. So why can't they do that with a 65 for me?

Then you may a big, heavy iron, normally aspirated engine like the Perkins 6 or Lehman 6. They don't make those engines anymore, well at least not marine engines from a major supplier.

The Lehman and the Perkins are 5+ liter engines. For comparison the Beta 60 is 2.4 liters which is why the manufacturer doesn't want you to overprop it to make 50 hp at 2,000. More displacement means larger bearing surface area that can handle the load.

Actually the Beta 75 might be your best bet to get close to what you want to do with a modern, normally aspirated engine. This is a 3.6 liter engine that produces 75 hp at 2,600 rpm. I didn't realize that this engine makes its maximum hp at such a low rpm, which means that its prop curve will probably come close to 50 hp at 2,000 rpm.

In other words with this engine you can probably use your existing prop with a 3:1 tranny and maybe take out some pitch so it will hit 2,600 to meet the manufacturer's warranty criterion. Then it will probably make 50 hp at 2,000 and 20 hp at something like 1,500 rpm.

All of which are close to meeting your criteria.

David, So, not to belabor the point but just so I understand: The fact that a given engine's power curve shows that 50 hp is available at X RPM and 60hp is available at Y RPM is irrelevent and it must be propellered for full hp & RPM. Why can't the propeller hp curve strike the engine HP curve at any point as long as you don't call for more power beyond that point? Why then do they bother to publish a power curve?

I don't doubt you, I just don't understand.

The engine prop curve, power curve, torque curve thing was explained quite clearly by Tony Athens on boatdiesel some years ago. So let me try now but probably not as clearly.

The power curve is the maximum horsepower that the engine can produce at various rpms. it is measured on a dynamometer with the engine throttle wide open. For a diesel wot means that the injector rack is opened to its max so it is pushing as much diesel as it can through the injectors on each stroke. I agree that the curve is not very useful except at maximum.

The engine's torque curve (at wot) is more relevant as that will tell you how much torque is available to get over the hump. You want a fat curve at that point for best acceleration over the hump.

The propeller curve is meant to represent how much horsepower the prop will absorb at various rpms starting at zero and up to the rated maximum rpm of the engine. At less than maximum rpm, the engine is throttled back to make the hp produced match what the propeller needs. It is always less than the wot hp curve except at maximum where it is the same.

Marine diesel engine manufacturers tend to treat the prop curve as a specification that the boat, gearbox and propeller must meet in order to satisfy their warranty requirements. That is why you can't take a 2-3 liter engine that can produce 50 hp or more at 2,000 rpm and prop it to that point. It will be working well above the prop curve and the manufacturer won't warrant the engine as it will have more load on it that it was designed for.

So since there isn't a realistic engine that produces a maximum of 50 hp at wot at 2,000 rpm you need to select a bigger engine so that you can prop it to the manufacturer's rated maximum. That is 2,600 for the Beta 75. Then at 2,000 rpm where you want it to produce at least 50 hp it will have enough oomph to do that and be at or below its prop curve.

JD makes a NA, 4.5 liter engine that produces 80 hp at 2,500 that you might think will work, but won't. You can see its curves at http://www.deere.com/en_US/docs/engines_and_drivetrain/specsheet/MAR/4045DFM70_A.pdf

If you look at the propeller absorption curve at 2,000 rpm it shows 40 hp which is less than the 50 that you want even though the maximum hp that it can produce is about 75 at 2,000 rpm. You need 50 hp or greater prop hp at 2,000 rpm to meet your criteria and the manufacturer's warranty.

So, something has to give: either live with an older Perkins or Lehman, go with a 100 hp or so turbocharged engine (and I sure wouldn't suggest that) or relax your rpm criteria. There isn't a modern, NA engine from a major marine manufacturer that meets all of the criteria.

David, Thanks for your time

Back to that pretty boat of yours....can we see some more pictures? It's obviously wood, no?

BOSBoatMan said:
Back to that pretty boat of yours....can we see some more pictures? It's obviously wood, no?
Click to expand...

BOSBoatMan said:
Back to that pretty boat of yours....can we see some more pictures? It's obviously wood, no?
Click to expand...


Thanks for compliment. No, not wood, she's glass. Designed by Wm. Garden patterened after his salmon trollers (not trawler). Built b/4 they knew how little FG it took to build a boat. 6500 lbs ballast. Always happy to show her off more pics attached. 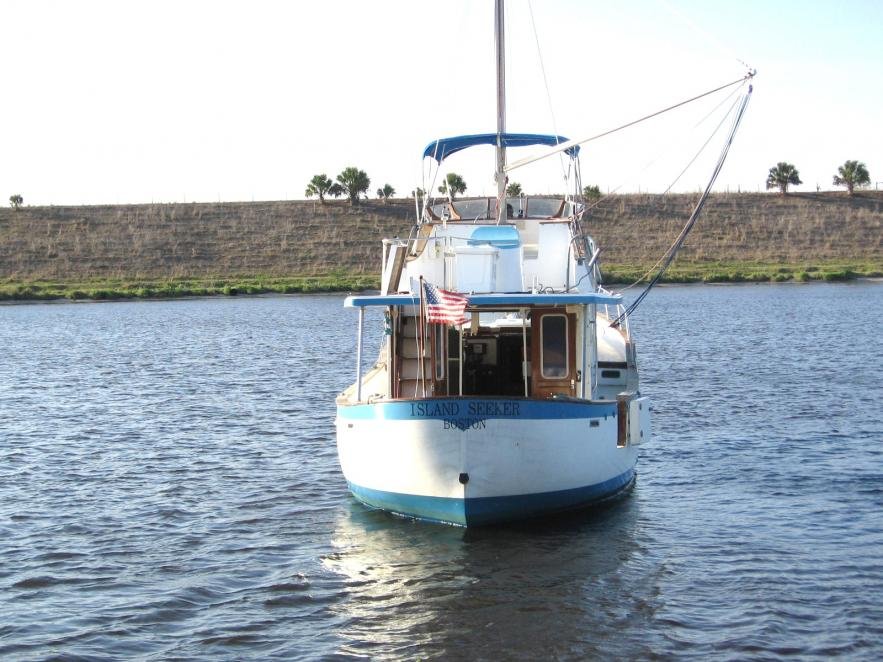 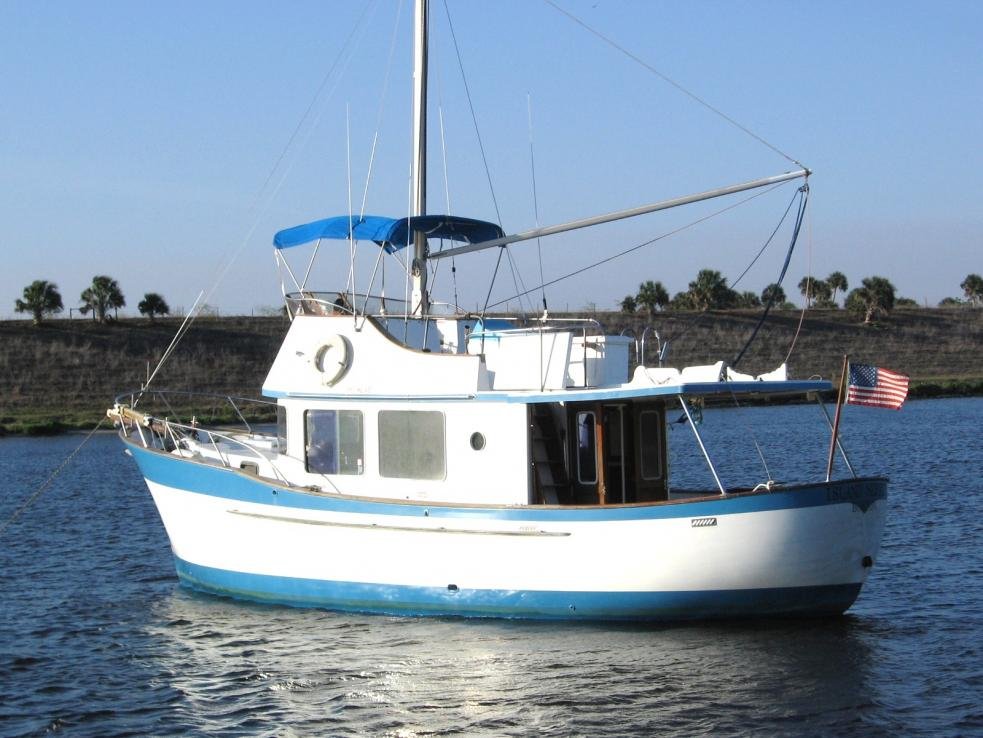 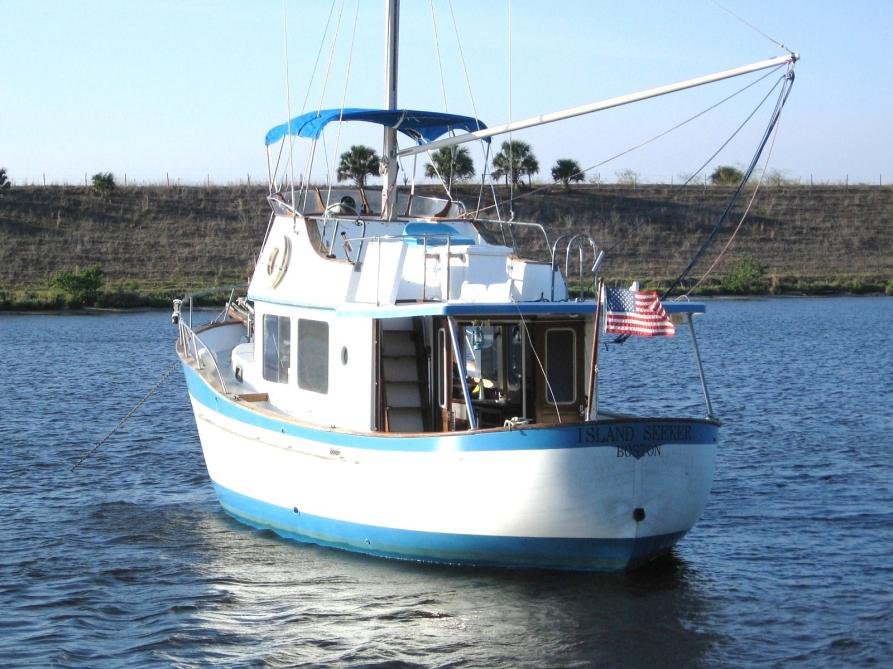 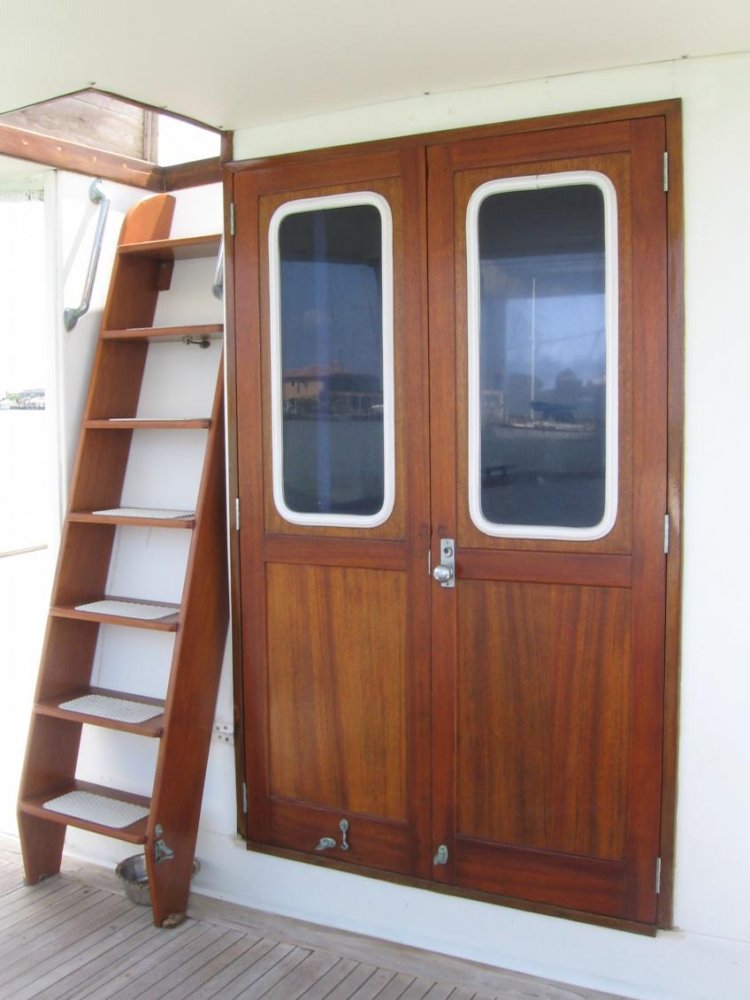 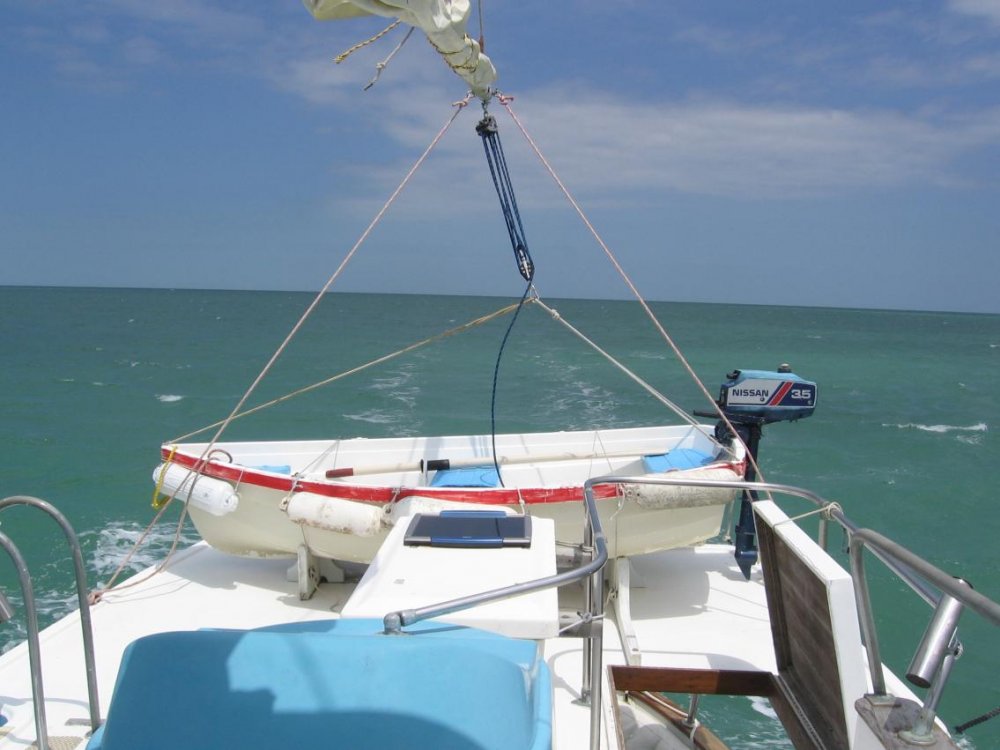 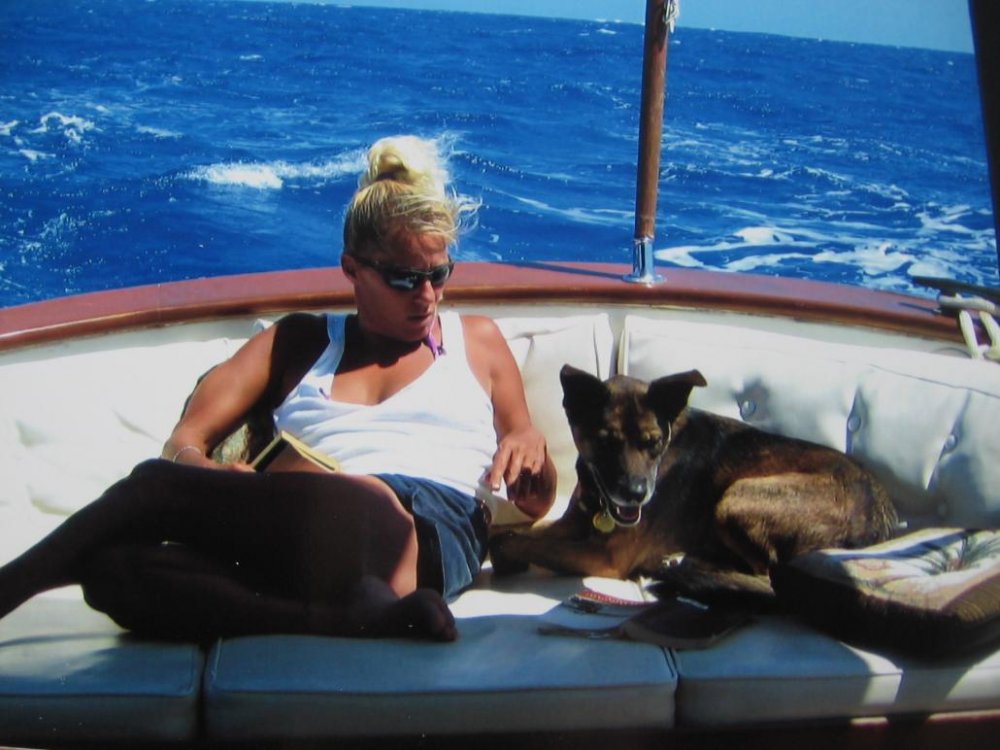 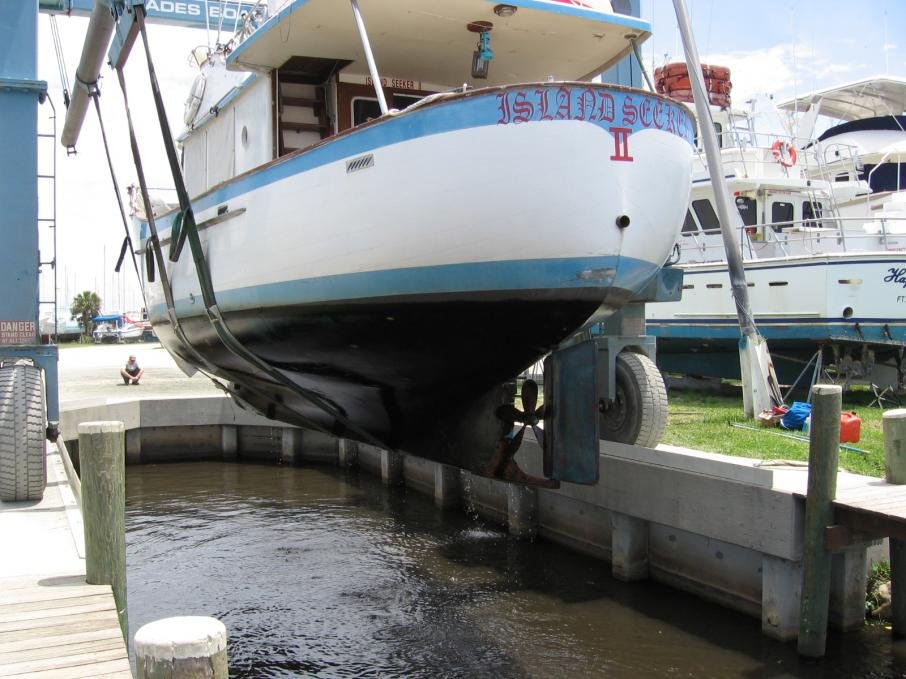 Tuna Pursuit said:
My friend had a 39, it was glass.
Click to expand...