Okay, it is time to put some rod holders on my new to me Duffy 31. I was thinking of at least 2 maybe 3 on port and starboard wash rails and maybe some on the transom wash rail. I am sure what ever I do would "work" but I would really like to hear from folks who have done it a bunch of times and have some practical experience in what works and what works well

One complication is the fact that there are two glassed in seats/lockers off the aft wall of the pilot house on the port and starboard.

One though I had was to place the rod holder in the same area as the seat but it would be a little tough to get at but not bad. Or place them just after the aft edge of the seat. In addition there are "wings" ( there has to be a more nautical term for these, I just don't know it) that extend aft of the pilot house on the inside of the wash rail that would get in the way if they were to close to the pilot house.

There is 5 feet from the transom to the aft edge of the seat. Is this enough distance to mount two rod holders? I have included a picture in an effort to clarify what is going on.

Please note that i will be removing the cleats and installing hawse pipe in the corners. I think I am going to go with triangular ones but any comments would be appreciated.

So what would you all recommend for the starboard and port?
1. 2 or 3 holders. Would you put any on the washboard where the seats are?
2. What angle 30 or 15 degrees
3. Spacing from the transom and distance apart.

By the way I was thinking of using either lee or LD marine holders. 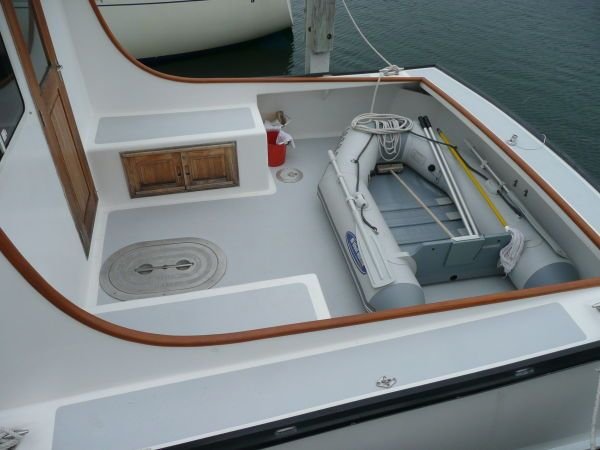 Depends on what or how you are fishing.
Bent butts like 80 or 130 class are going to have long butts and wont fit in the same rod holder as a say your gear to troll for striped bass.
My boat I have 6 Lee 15 degree for the small gear, and 5 LD deep swivel holders, 2 90 degree, the other 3 are 15 degree..
All but 1 are on the wash boards in the cockpit, 1 deep swivel is stb side close to my helm as I have a big big swing up stb side door.

Eborn,I would go with 3 on the sides...as for the boxes witch are neat.....you might have to put a plumbing cap on that one so the box doesn't fill up with water
E

Thanks for the responses. As far a rods go, I don't have any bent butt rods. Mostly stand up tuna gear and lighter trolling gear for stripers, etc.

It sounds like 3 15 degree holders is the way to go on the port and starboard. Any suggestions on optimum spacing? For the washboard across the transom do most folks install rod holders if so would you use 15's as well.

Thanks for your help,
Eric
F