A Maine Coaster and a Willis Beal. I like the WB but not sure if the damage is superficial or structural. For the right guy it seems like a deal if you could get it cheap...

Circle file the rudder and bearing on the Beal, use the rudder as a pattern and have a new one made up. Put in a new dripless composite rudder bearing. Enjoy boating. Simple fix on that part.

that beal doesnt look bad at all. i cant believe the insurance totalled it or that the owner didnt buy it back. it always a mystery house insurance on this works.
B

I would def go look before bidding !!! Lets not forget the force of that storm. Many boats looked good but got tossed around and messed up real good.

If you PM...Hntrss on this site he can answer any questions about the R P it was his old boat......

is he building something new?

That was his last boat .....He has a nice 41 Michael Fitz(inspected)now

Does anyone have any more information on the condition of this boat? Thinking of taking the ride down to have a look. Any information is appreciated.

This one is on there also.

I have seen many nice boats on that site I'm liking those cats one has nice yammahas and might be a good deal. Waiting on northeast marine liquidators to post some new stock. Also know that there is a big salvage yard in Long Island that will be posting some decent boats. Ill post any good boats I find

Bulman711 said:
Does anyone have any more information on the condition of this boat? Thinking of taking the ride down to have a look. Any information is appreciated.

anyone know if the hull is cored?

Holy Crow, the secrets out. I have not owned that boat for over 6 years, but she was good to me while I did. I believe she was #6 or 7 out of the mold. Built in 95, original power was a 6cta cummins 400hp. Repowered in 04 or 05 with a factory reman 430 and sold in 2006 to the latest owner. I believe around 2000 hrs on her now. 15 knots at 2100rpms. 16knts light, 14knots loaded. I spoke to the owner myself to see what happened. There was extensive crushing damage on the port side, enough to break the generator mounted there off the mounts, rudder was ripped out, shaft, prop demolished. I think anyone serious should try to go see the boat for themselves.
I had it built with 300 gallons usable fuel in 2 tanks, but somehow wound up with only 250----(bad math somewhere). Generator was replace around the same time as engine, phasor 5kw. Trouble free. I think you are starting with a good power plant and generator, but I was told the structural damage was significant.
There is a 2 great fishholds on the boat and a 120 gallon livewell. On one of my few canyon trips with her we had 43 35-45lb core yellowfins and a 210lb bigeye all below deck.
I was interested myself, but reallly not anymore, so you all know, I got 10 pms about the boat here, the owner has 2 friends that are bidding on it and I dont think for a minute that the boat will sell anywhere near the opening bid. I really would rather answer questions here than try to deal with everyone individually. She is an absolute beast of a sea boat, and I made my living with her for 11 seasons. Anyone who really fished tuna in the 90's and early 2000's has seen this boat on the grounds. I will try to dig up more photos for you guys and scan em in. Sorry about not being able to answer everyone individually, but if you honestly are gunning for her, I think you should know there is a LOT of eyes on her.

Boat is solid glass. My impression is that it is obviously fixable, but I would want to check stringers, etc.. I thought if I could have got it from the salvage co direct, or the insurance co I would have taken her back, I regret selling her in the first place, but there are too many eyes on her that to the point I wanted to bid , I think she is a lost cause for me personally. i believe that salvage title will follow her for the rest of her days too.
Last edited: Feb 18, 2013

some pictures . I have some build pictures as well. I changed the hatch on the fishhold after these were taken, We made a 3" insulated top with a raised lid to keep deck water out, worked out good, but a bit of a hassle to navigate. Chatham changed everything when it came to need to hold ice longer and water on the deck! Lots of fun trips past Monomoy! 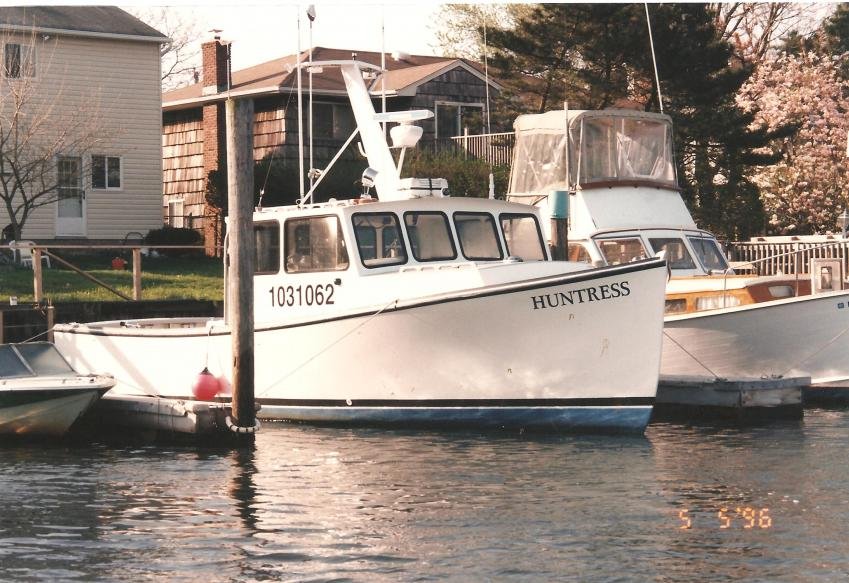 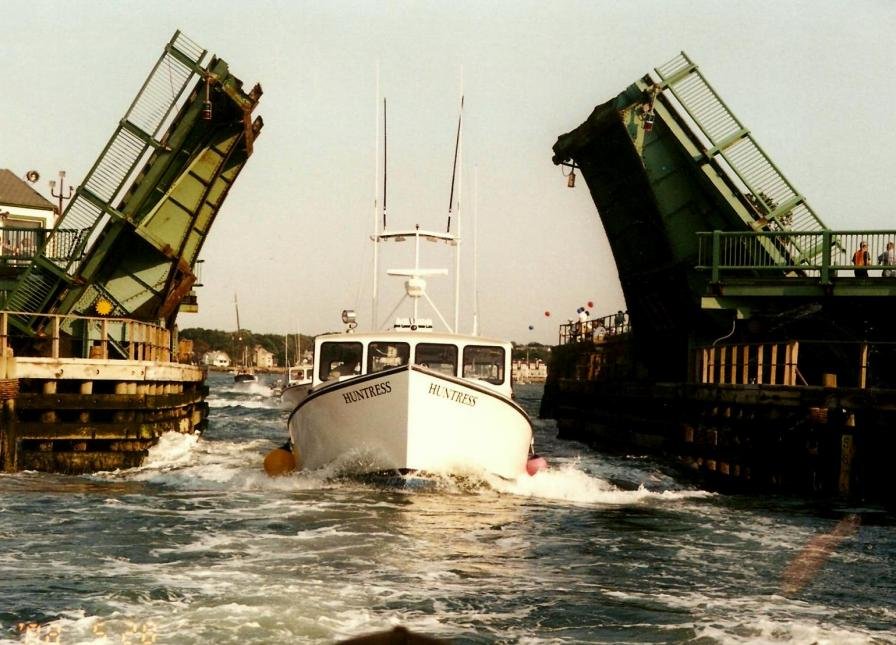 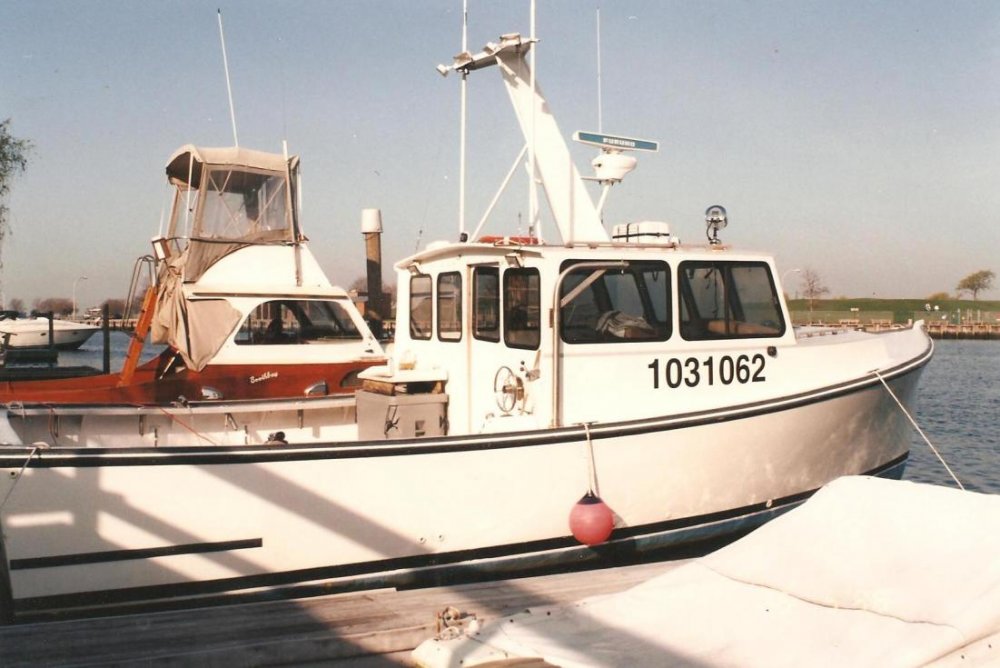 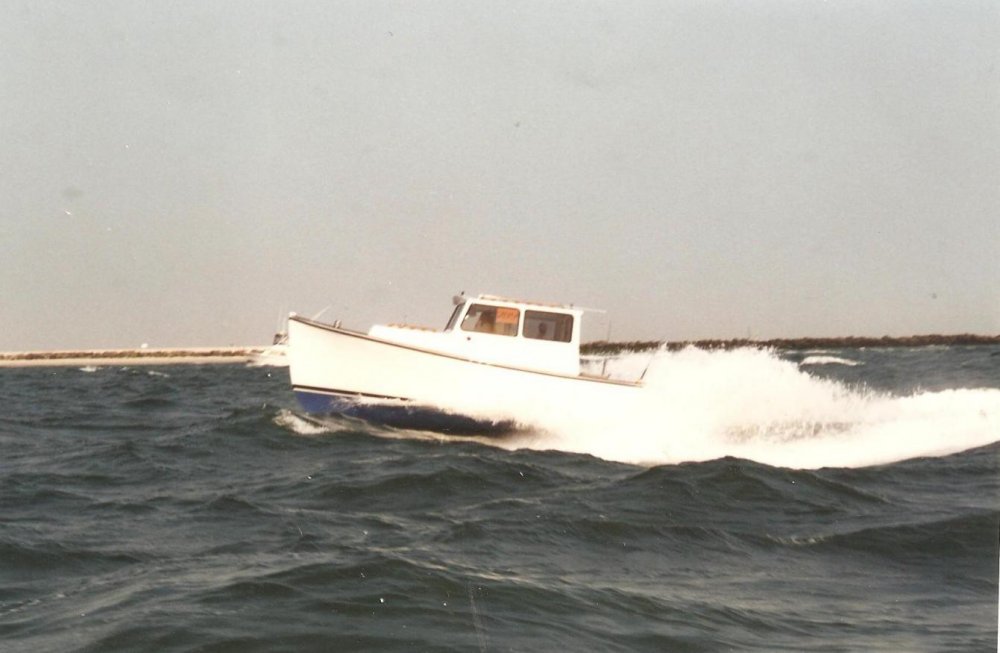 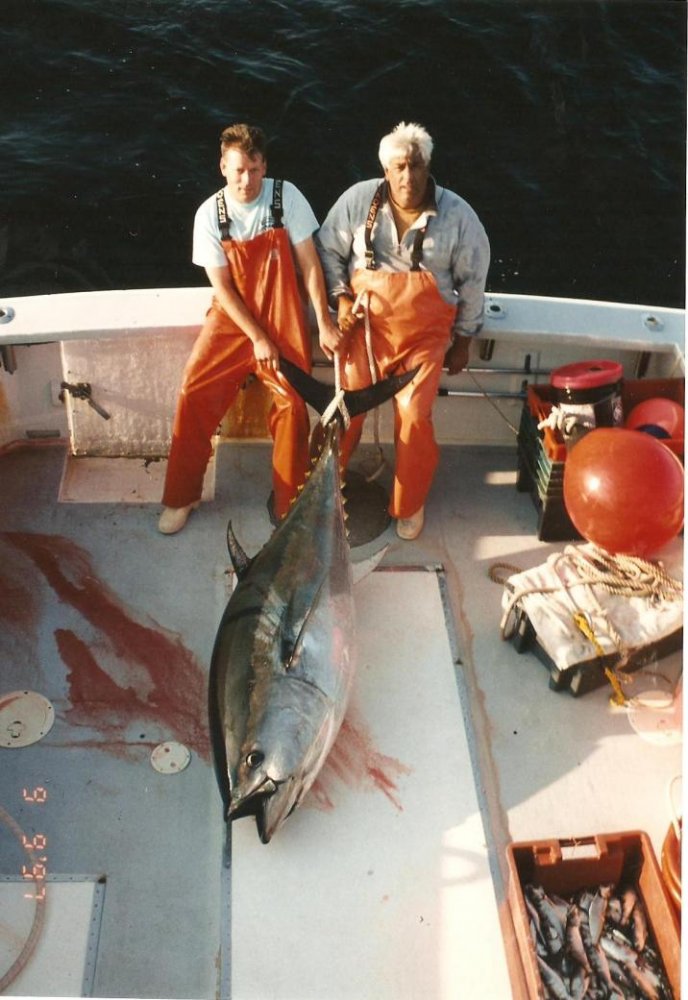 Thanks for all the info!
Still gonna throw a bid in, if it happens it happens.
Great looking boat!
Cpt. Rich

A buddy of mine just called after looking at it. The word is it also had seawater in it.....game over for him.

Huntress is that Tony moustache in that pic?

Yes , thats him with my brother. We lost him 2 years ago. What a great guy. He worked deck for me a couple of seasons. We put a lot of fish to bed together.
Last edited: Feb 19, 2013

Just took a good look at squibis,
Needs a rudder, prop, shaft removed and looked at .
Hole on port side repaired. Signs of stringer damage.(possible deck removal)
Not sure about the fuel tanks.
Bow needs some work.
There was plenty of water in it.
If you have some deep pockets go for it!
I'm out on this one!!!
Rich
You must log in or register to reply here.
Share:
Facebook Twitter Reddit Pinterest Tumblr WhatsApp Email Share Link