I've played with all flavours of sharks for about 30 years including Gw's as bycatch. Down here we do not fish them for sport so much as commercial. I used to fish my Duffy 35 with a 7 mile spool but lately because of regs and a nasty divorce, I downsized to a 3-4 mile reel on my 26' Seaway.
We still have a great Catch per unit effort (cpue) ie; hooks/fish caught. We still catch some bigguns too but mostly turn them loose anymore for several reasons including our age and boat size.
Sorry, but my GW pics and those of my 35 Duffy were left on my home computer and the ex has those. Lost to me forever!
Anyhoo, here's a few recent pics courtesy F/V Sea Dancer TooJo 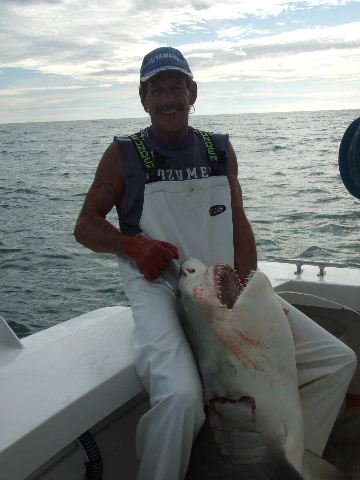 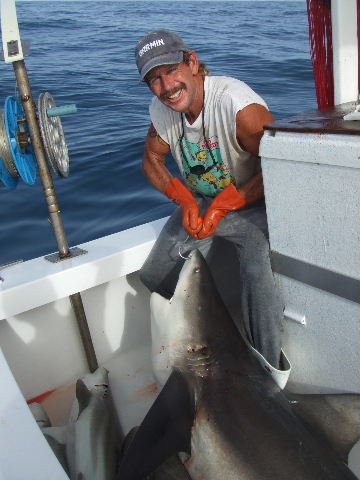 What do have for species there? Good food quality? Thanks for the pics.
S

As far as good food quality....Sandbar, dusky, gr white, cuban night, bignose, blacktip, lemon, spinner, silky, bull, shortfin mako, blacknose, atl. sharpnose, finetooth, bonnethead. We also catch tigers and hammerheads which have good fin value but not so much meat value so normally I turn them loose.
The last 4 are considered "small coastals". The rest are grouped as "large" Coastals" except the mako, a pelagic species.
The GW, dusky, cuban night and bignose are "prohibited" species since 1997. That means if we catch em "dead or alive" we can not bring them in.
Last year we had an open season for "large" coastals from july 15- nov.15 at which time we were allowed 33 fish per trip excluding sandbars and prohibited species.
The "small " coastals were open all year but because of poor prices after the 1st few months, hardly anyone fished for them and the qouta was never filled. There's more to it than that but that's basically the reason. It was also because the "large" coastals were opened for most of the second half of the year and they have a much greater value.
The sandbars are only allowed by "random" selection of "qualified" applicants to a research fishery created for them since 2007. I primarily fished for sandbars for 20 years and now I can not bring them in because of a lack of "random" selection after several apps., although I have a landings history for them which is quite impressive!
Our primary "large" coastal target is blacktips which we fish for pretty close to shore where we also catch large bulls and lemons with fair regularity. The lg head is from a 400+ # bull which we had to cut in half to get aboard.
I hope this answers your question and possibly a few others....Jo
You must log in or register to reply here.
Share:
Facebook Twitter Reddit Pinterest Tumblr WhatsApp Email Share Link