I HAD A SIMILIAR PROBLEM, NOT AS SEVERE . I WENT ON BOATZINCS.COM AND ADDED A PROPELLER NUT "H" WITH ZINC ANODE 2 INCH COMPLETE $105 IT SOLVED MY PROBLEM.

Providerrrick said:
This prop is 2 seasons old! I bought new in 2019 from a Long Island shop as a DQX “style” 26x27 4 blade 2”” bore. I re powered my 31’BHM that year. QSB 440, ZF 85A, 2 1/2:1. Motor reaches 3400 wot. Running at 2800 mostly, 18-19 kts depending on load it’s carrying. I had difficulty with the running gears first. Vibration was an issue but that was resolved but hull turbulence remained and only started at 2500 rpm and up. Had to cut down the front of the prop hub and still no room for a zinc. I installed a shaft brush and think it’s good. I know I need a replacement prop since I have no spare. Tip clearance is 3 3/4” on the hull and 2 3/4” on the skeg. I need ideas on why the pitting and if the prop should be different? It’s not easy to change because of the space we had with the stern bearing housing. Thanks, Rick

Hey , check your rudder post nuts and bolts , top and bottom , i had a similar thing occur and the electrolysis had gotten to them bad !!!

Make sure your shore power is not grounded before it gets to your main AC panel.

I think, and I'm no expert, that there is an electrolysis issue going on here but maybe something else too. The prop nuts and parts of the blade eroding so quickly makes me think either you or your slip neighbor have stray current issues. I posted this a while ago, forget which thread. I repowered my 26 JC from a gas 460 Ford to a 370 B and added a lot of propeller. Marginal shafting, less than recommended tip clearance and the prop 1.75 inches from a straight deadwood keel made me think the pinholes showing up every year were from cavitation. Technically this is a condition caused by oxygen bubbles exploding against metal in a vacuum most seen in engine cylinder replaceable liners which swell and retract during firing cycles and is controlled with diesel coolant additives. I had the prop, a DQX, welded up three times from holes and after 7 seasons it threw a blade. I got Dave Gerr's propeller handbook and I learned that the pinholes weren't from cavitation but from blade over loading. In an 18" wheel you can't get 5 blades but Michigan offers the DQ 486. This brings the blade area % up from .73 to .86 of a circle. Also the prop weight went from 18 to 25 lbs. That's a lot of metal. I also had to take an inch of pitch out of it, it was grabbing so much more water. Clowning around it will submerge the transom in reverse before slipping. 7 seasons now and it looks the same as when i bought it.
I'm afraid from the pictures that your wheel is too far gone to repair. But I'm not a prop expert. I don't spend any money I don't have to, but if it was mine I'd get a marine electrician to check your bonding and talk to your propeller supplier about the 486. 7 seasons and no issues.
Last edited: Apr 11, 2021

Do you have a Galvanic Isolator?

use a prop nut zinc to solve the shaft zinc clearance issue.
A

Blitzen said:
Do you have a Galvanic Isolator?
Click to expand...

tunamojo said:
Hey , check your rudder post nuts and bolts , top and bottom , i had a similar thing occur and the electrolysis had gotten to them bad !!!
Click to expand...

A few ideas: I have always run a propnut zinc and it has worked for me but my shaft is isolated from everything else by a Drivesaver . The typical zinc transom plate uses up most of itself reacting with the bronze it is mounted to. Your transducer ahead of the prop COULD be causing cavitation and some of your problem is definitely cavitation. I would be nervous about your other underwater metals given the length of time this has been going on. Check your bilge pump wiring expecially the float switch which carries 12v+ into your bilge water if leaking. Make sure the switch is in the positive lead. You need another new prop, that one is not repairable.
C

Just thinking out loud: if squeezing the maximum HP out of a motor, back in the day we would port and polish the intake manifolds, and try to get it breathing easier. Even minor improvements in improving the keel area water flow might make a difference. Including keel shaping, even breaking the edges on the cutlass bearing bronze piece. Just to note, years ago I had access to an AEMC 2000 ground meter and we tested an entire yacht club. We did find some boats leaking AC into the water. They could be part of your corrosion issue. There is probably newer equipment now that could help diagnose that issue. There have also been books written on the topic. I once took a two and a half day course on grounding, it can get very technical. The worst I ever saw was an electrician put an electric drill plug prong against the dock conduit and attached the other prong to a piece of copper wire which was put in the creek. The electric drill ran, slow, but was turning. The offending boat was determined and unplugged. It was the guy with a residential wire extension cord going into his boat. Our steel hull trawler never suffered any electrolysis issues over the two decades we owned it but it was carefully wired and we put in an isolation transformer.

Confirm there is not a connection between your shore neutral and ships ground and bonding system at your electrical panel.
If you have a high quality (Fluke) clamp on ammeter, check for current flow in your AC and DC ground(s) with your shore power cord connected and disconnected.

I agree with Brooksie and others that there is certainly cavitation damage on the prop, and by the sound of things you need more prop. You have a boat with a keel not designed for your current HP also, I think. Lots of good advice here. Problem is, you have multiple issues. I would be heeding the warnings given to check your other fasteners below the waterline. I hope you get this licked. Good luck!
T

Has anyone converted from the bolt on cutlass bearing to a internal? What would it take?

joe4852 said:
Has anyone converted from the bolt on cutlass bearing to a internal? What would it take?
Click to expand...

Joe 4852. I think what your asking about would be a shaft tube installed. It would solve a bunch of problems but I looked into doing it and it was and is too big a project at this time.

thanks to everyone for the great advise. I’m thinking I’m going to slide the rear cutlass bearing up inside enough to cut 1 1/2” off the tail of the bearing housing. Then I can put a collar zinc at the front of the prop (1 3/8” wide) and still have glow through the cutlass. I will also grind the 90 degree edges a little where the housing mates up to the keel. I will see if that helps with flow and I’m sure the collar zinc will give me the protection I didn’t have.
As for stray voltage that’s definitely my problem. We are going to test it in the water next week. The marina I was in last year had wiring problems snd an electrician said they had leads laying on the water on my dock.
I need a new prop and have a shop looking for a 25x 27 four blade 2” shaft. We will be adding some cup.
Here’s a pic of the housing I will cut. I’m going to try to do it without pulling the shaft with a sawzall carefully! 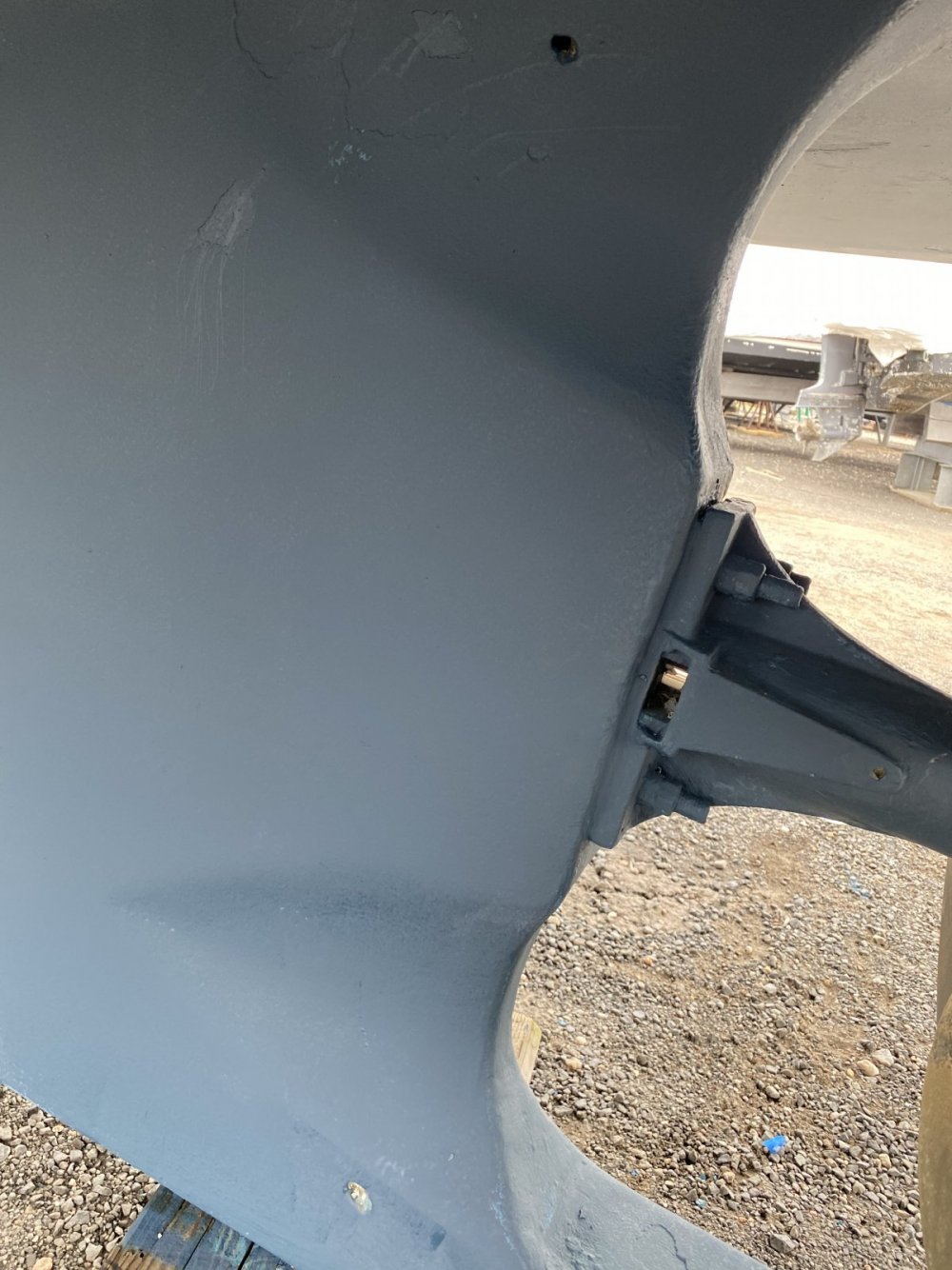 Actually I see now that I won’t slide the bearing forward or I’ll lose any ability for the flow of water through the bearing. I hope the bearing and housing being just 1 1/2” shorter should be ok? I have the same hull size bearing at the front end of the shaft with a PSS shaft seal.

Genius said:
I don't think that is cavitation. It looks to me like it is a stray voltage issue. Most likely AC IMO.

Let me guess...you have a slip and you keep it plugged in to shore power?
Click to expand...