With the weather getting better every day. It was time to start to really begin work on my boat. This is not really a refit in the sense that I do not need to use a Sawzall but it is a bit more than I was hoping to tackle this spring.

The bottom needs to be stripped and repainted I thought I might get one more season out of it. The splash rails were not attached very well and rotting in some areas. And the supports for the hardtop were rotten.

In the fall I removed all the teak around the hardtop for refinishing and the two benched that my captain chairs sit on. My original list was to refinish the teak and touch up the bottom.

After this weekend I need to refinish the Teak plus repaint the top sides and the bottom. I have attached a few photos. I will keep posting photos until I her back in the water.

Luckily my wife is very good at varnishing teak so I am all set in that department but any input on how to redo the topsides would be appreciated. 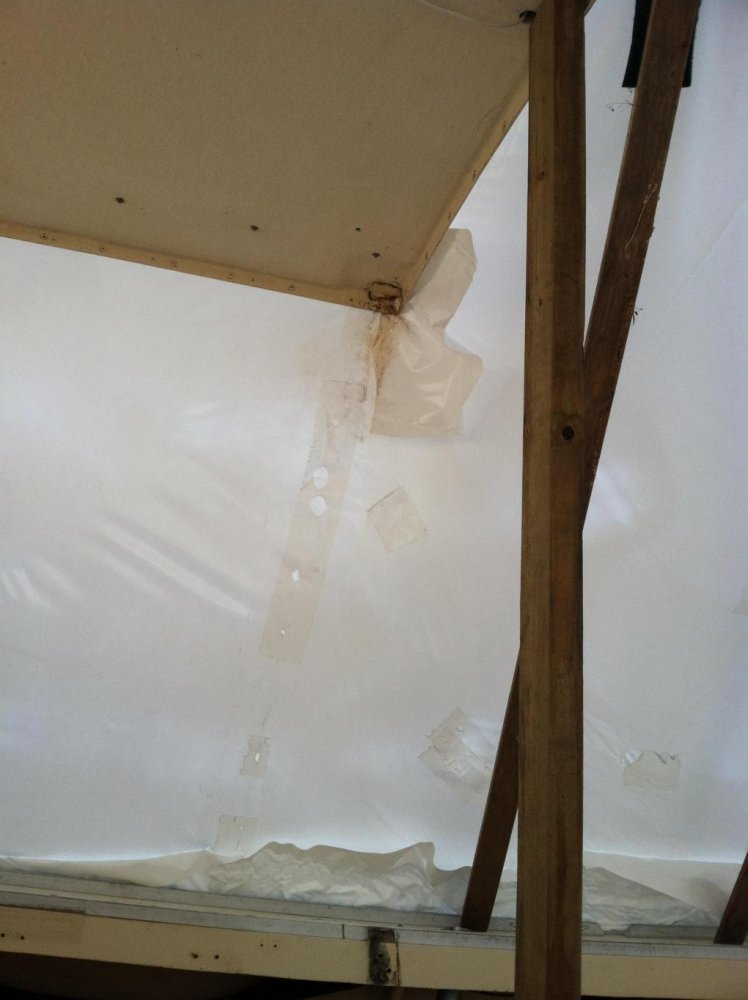 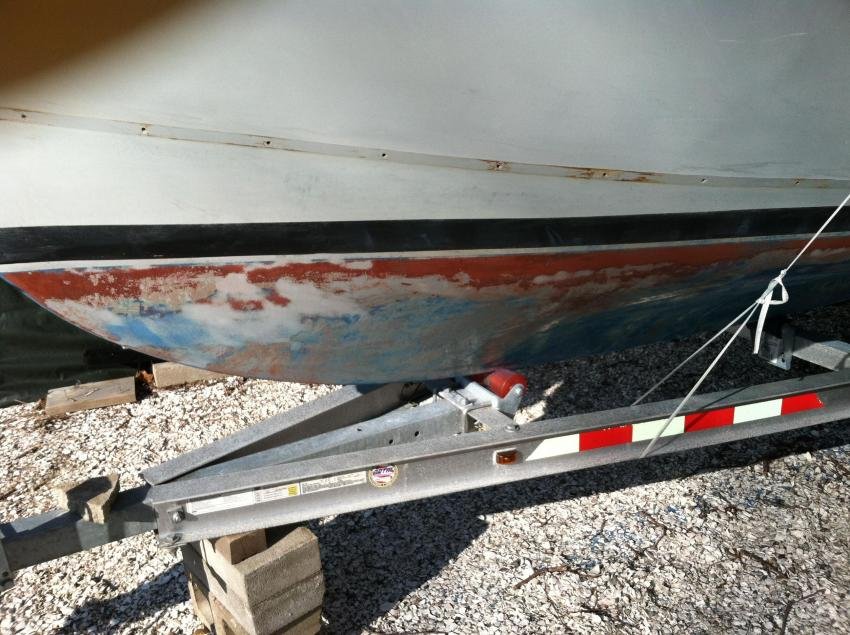 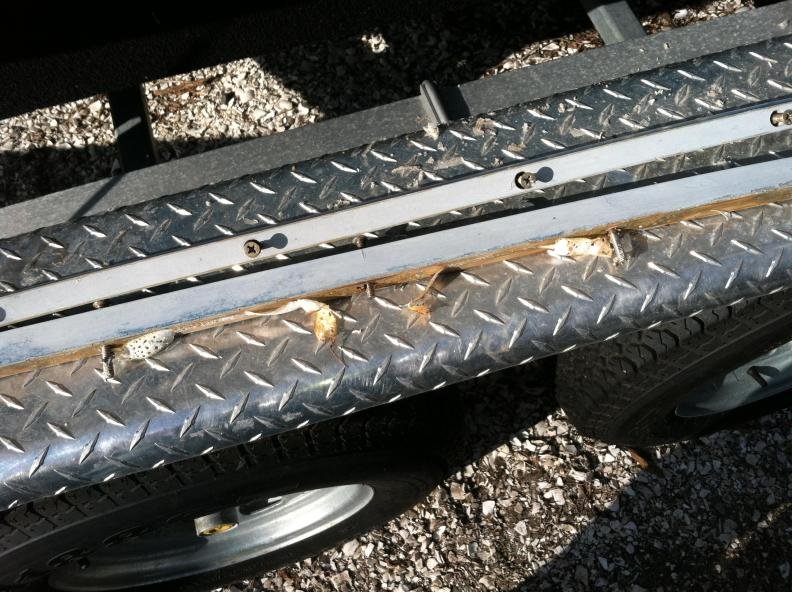 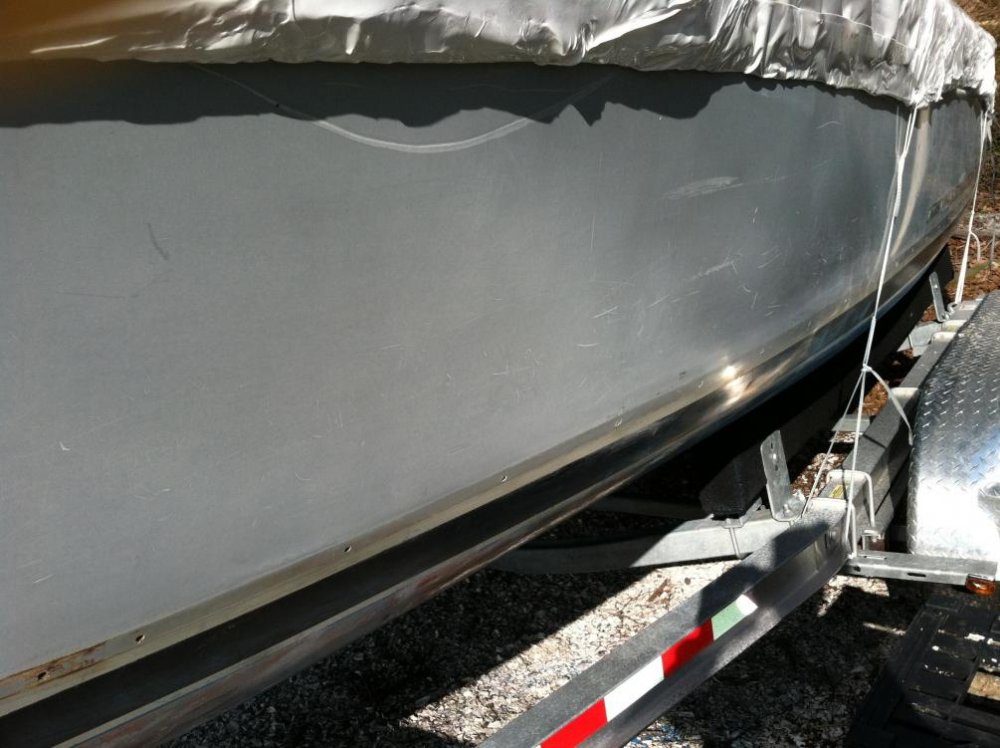 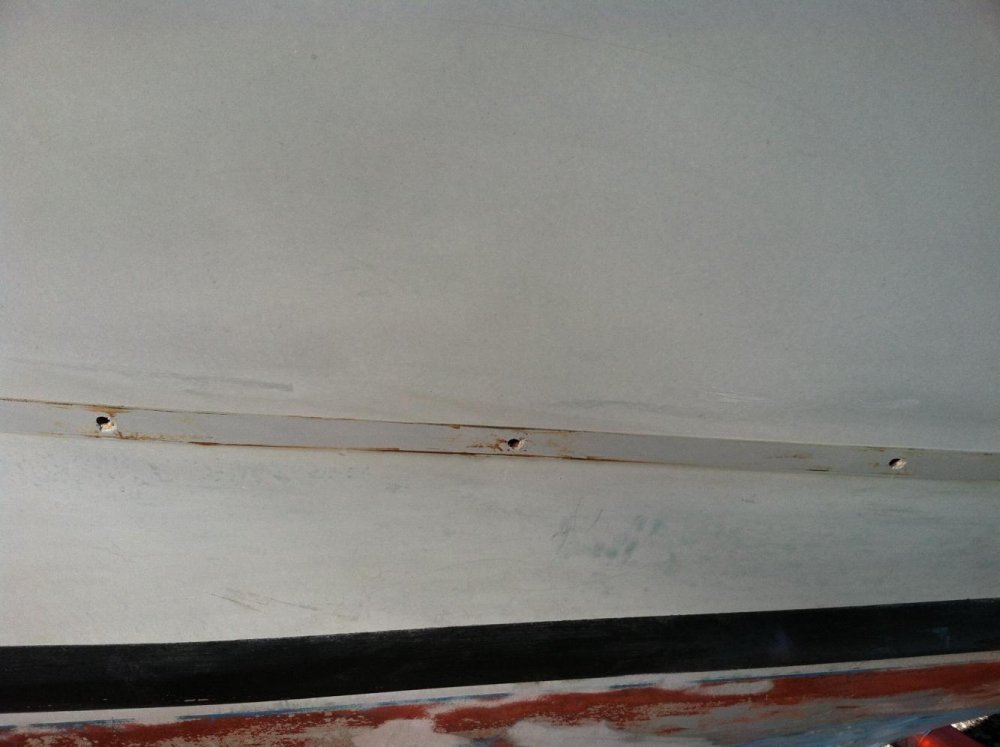 One Step Forward, One Back

I drilled out the holes from the screws and bolts that held the splash rails on the boat this weekend. What I found a a bit concerning. More than half the holes had some degree of moisture or wood rot. I picked out as much of the wet core as possible. I am going to let it dry out for a few days. I can drill bigger holes but I am hoping to avoid going too large.

Does anyone have any suggestions on how to get all of the moisture out and fill the whole. I was going to use West System Six 10. It has also been suggested to me to use 4200 or Marine Tex. Any and all suggestions are welcome.

I would oversize the hole to the point where the rail still hides it and fill it with thickened epoxy, the 6 10 should work but I would personally prefer working with regular epoxy and cabosil.

5200 or 4200 would not be appropriate for filling those holes, and marine tex would be way too expensive.

Is the hull cored in that area?? If so, your decision to how far you want to take it.

The hull is cored in this area. I am also going to paint the topsides once I have all the wholes and dings filled. So I could make the holes as big as needed but I am afraid to start really digging for fear of digging myself into a much much larger project.

[email protected] said:
The hull is cored in this area. I am also going to paint the topsides once I have all the wholes and dings filled. So I could make the holes as big as needed but I am afraid to start really digging for fear of digging myself into a much much larger project.
Click to expand...

"digging myself into a much much larger project".

Never but that's my point. I would like to go boating this summer.

Can you acess from the inside? If so get a 2 inch hole saw and cut it out from in there. Then just fill the hole with hull and deck putty.

I can only get to the inside if I remove the floor. The floor was replaced prior to when I purchased the boat. It is only a few years old and in good condition.

Could cut 2" holes on the outside since I will be repainting the topsides?
E

I would dig out the wet core around the drilled holes, and use a thickened epoxy to pack into the new void. I have used this method, but went with a chopped strand mixture that was easy to pack and kicked quickly. I've seen how a nail tighten into a hand drill and then bent over will clean out a core quickly and efficiently.

Eastporter i also have used a old allen wrench in a drill ....it works good

Thanks these are both good idea I will try it tonight. I am planning on using West Systems Six 10, which is the thickened epoxy in the caulk tube.

i would also be interested to find out how much rotted core you find,because my sisu might have a similar situation .

I will let you know how much core rot I find. Depending one who originally attached your spray rails and how much maintenance has been done over the years. Your boat may or may not have any rot.
E

Did you have any marine caulking behind the spray rail? The balsa core in the Sisu will rot over time if it wasn't treated after drilling (which it doesn't look like it was). I put PVC spray rails on my boat and used 5200 around the holes and under the rail. It protects from water intrusion and provides a secondary bond after the mechanical ss fasteners.

In MHO I have never seen any caulking, not even the famous 5200 not leak under water over time or at times above water if at a flex point. It needs to be over drilled and sealed with epoxy.:???:
E

tunafishhkg said:
In MHO I have never seen any caulking, not even the famous 5200 not leak under water over time or at times above water if at a flex point. It needs to be over drilled and sealed with epoxy.:???:
Click to expand...

The balsa core needs to be removed and thickened epoxy installed as stated earlier in the thread. The caulking provides a watertight bond that will break down over time but will hold up under flexing of the hull.

...why is the hull flexing?

Eastporter, The Spray rails were installed by the previous owner. Looks like the adhesive sealant failed and water got into the screw holes. I am not happy about what I found but I am will to spend the time and money to fix it correctly.

I meant in areas that normally flexes in boats and we know boats do flex or maybe movement is a better word, and its accounted for in design like filets at the bulkhead to hull joints to stop the hinge affect. This is why you need a experienced boat carpenter over a normal carpenter when building things like trim since he understands the forces and allows for the movement or builds for it. Not a lot but I would think a spray rail would under the loads it takes from water pressure and being long, it gets affected by normal hull movement somwhere as well as differential material movement due to heat and cold. Anyhow I just have never seen to often where caulking alone stops water especially under water and I know mine did also when I removed them for harpooning. My hull is foam cored so no collateral damage, but one of the holes was at seam between the core panels that had no bonding putty that I got about a half gallon of water out of the hole from the inside. I knew when I filled the holes with epoxy and then gelcoat, that it could leak and it would have to be fixed after the season. lets just say a joint leaks more often than not, especially in places like rod holders unless well bolted to solid glass so the joint does not move and only the surrounding glass does. Its also hard to seal holes correctly by just filling in with any material due to shrinkage unless you put a patch in and with wood core you need to patch the outside or make sure you seal it if it does since the damage from a leak can be so bad. Remember seeing a boat at WB's shop long ago that had the rails leak into the core and added tons in weight. It was going to take months and a lot of holes drilled to try to fix this hull. Again experienced people know all this and can do it but to explain over the web where you can not see how its working or not working is another thing.:geek: Just trying to make sure people understand the problems and solutions.
Last edited: Mar 21, 2012

I took a quick look last night and the holes have dried out. I poked with a small allen wrench and hit solid core 1/4 in around the holes. I will fill them on Saturday before the rain comes this weekend. Hopefully I will be able to finish sanding the wood on Sunday.
You must log in or register to reply here.
Share:
Facebook Twitter Reddit Pinterest Tumblr WhatsApp Email Share Link