I have no problem admitting I'm totally buffaloed by what does what. But I don't think the 265 goes wide. And not sure why you put up the picture of the 275. That's the one I got. This is the 165T/265LH PM
Furuno 165t/265lh-Pm488 Dff3d Chirp Combo Pocket Mount Transducer
This is the B265LH
Furuno B265lh Bronze Thru-Hull Chirp Transducer - 12-Pin
and this is the B275LHW
Furuno B275lhw Bronze Thru-Hull Chirp Transducer - 12-Pin
Chris (Wharf Rat) could undoubtedly explain and provide (backordered, for awhile, of course). It may be that the limited run of PM compared to using the same shoe and fairing block for several different models is the price difference, but I see 3 wires coming out of the PM and only one out of the bronze shoe units. Or it could be the freq. difference. But I'm a simpleton, so somebody with knowledge should step in.

Yes there is a PM one, thats not the one I want. 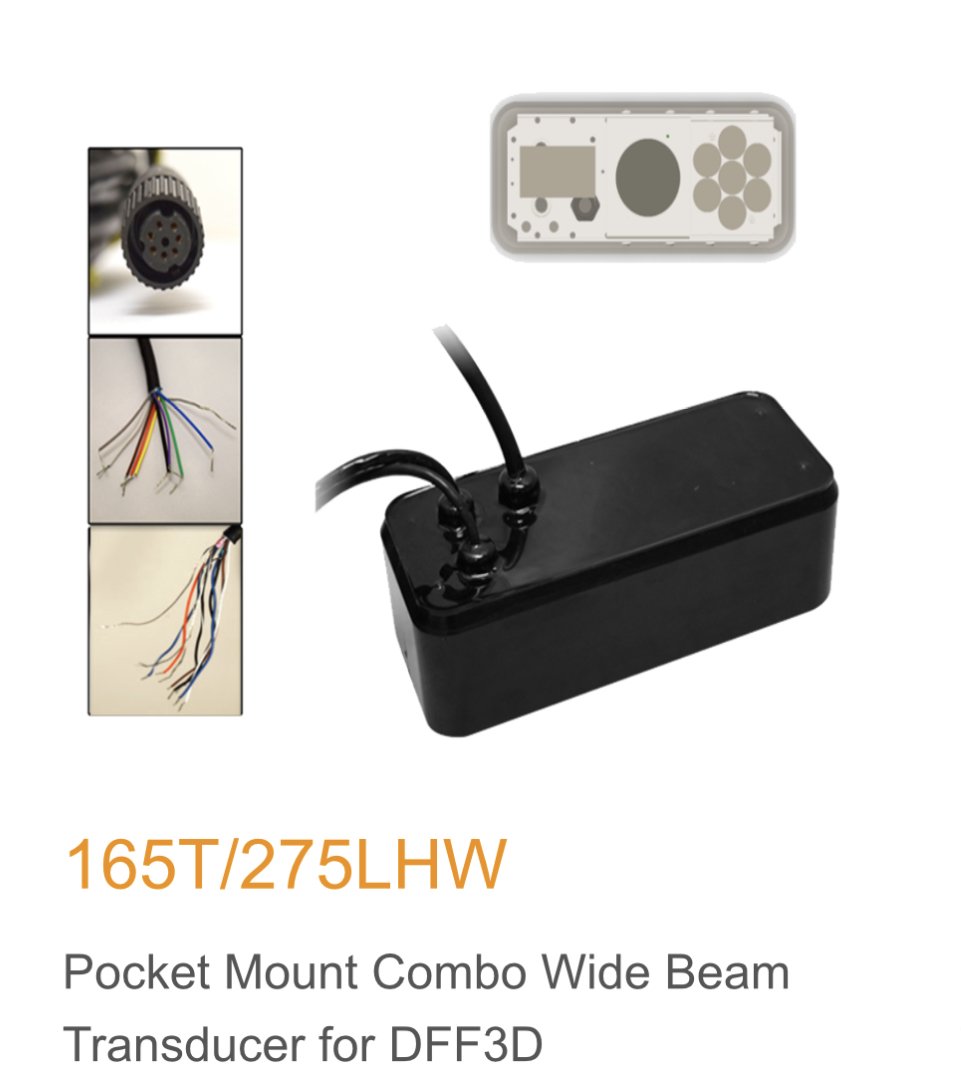 MorningTauk said:
In my new build I’m thinking or going with Two transducers…. B285M for bottom and B275LHW LHW ForTuna, etc. TZT3 19” and 12”. Had many long talks with people and I think that is the best for what I am looking for in 350’ of Water or less. A lot of time to plan but thats what I want if possible.
Click to expand...

I guess it was someone else looking at the 265, but "B" denotes bronze. The LHW MUST be mounted centerline on a keeled boat. If it's going to be built into the hull, you don't necessarily need a box, just some crafty glasswork. Still, why is the bronze shoe in the $1500 range and the PM $2600 if they have the same elements and utility?
T

on my little Shamrock 246 I put a Bronze Airmar 50/200 on a fairing block just about 1/2 way tthe length of the hull and about 1 ft to the starboard of center line. It runs well all the way up to 35 kts WOT without much interference and no cavitation. of course this is a Modified Style Hull with tunnel drive. I am going to add a second sidescan to the transom on the starboard side squzed between the hydraulic trim tabs and prop. it should not get much noise I hope. On a 30 ft Downeast style hull I had with 12"x48" Hydraulic Trim Tables a 3 ft keel that ran 3/4 of the length of the hull I installed a Airmar 50/200 on the Starboard side and another 198 khz transucer on the port side. these were both place in front of the raw water intakes and dynaplate. that boat had a average speed on 18 kts ( Until I dropped in a 680 HP Engine, 2 weeks before a guy made me an offer on the boat I could not turn down. Its on Cape Cod now and he actually ran it out to the Great South Channel on a nice day in January years ago. not me!) That boat Did get noise between the two fishinders at anything over headway speed so I would just turn down the gain on one or both units. seldom did I run at WOT as the fuel consumption was nasty. but at 2-4 kts I could crank up the fishfinders gain and it would penetrate a couple feet tru the Mud of Glouster Harbor. Found a lot of items burried in that mud diving. I have a coulde transducers that I want to sell. will post them in the for sale section.
T

Back when I wourked for Ratheon Maine in Merrimack NH before Raytheon Marine went out of business. a guy who worked there who knew Nothing about boats or electronics put a 100,000 Watt 3 ft long 1 ft wide Transducer on the Raytheon President Picards Boat downon Mathards Vinyard. The Boaty was a 38 ft Wellcraft Scarab with twin 502 inboards. The guy just drilled a couple holes and bolted the transducr on crocked sideways. Picard called up yelling that his boat was turning sideways all by itsel and they sent anouther guy down to take off the Transducker (it was $3,000 by the way wholesale) and install the correct one with a fairing block. the big one ended up on a 150 ft Commercial Trawler in Alaska that only did 4-6 kts. Worked excellent but had a $30,0000. SONAR to power it.

So Morning Tauk, did you get it figured out? I just got "backordered" yet again on a transducer that would work with dff3d (wide). Backordered to DEfrigginCEMBER! (Nov. 30th). My dff3d is useless. No wide transducers out there that I can find, and they do have to designate "W".
You must log in or register to reply here.
Share:
Facebook Twitter Reddit Pinterest Tumblr WhatsApp Email Share Link