Looking at powering my next boat with a Volvo D-13 700hp at 2,300 rpms. The price is real good, but I know it's a newer motor and was wondering who had experience with them. Dealer support would be good where I will be using the boat, but I'm also looking at the Deere 650hp, which is quite a bit more money.

powderpro said:
Looking at powering my next boat with a Volvo D-13 700hp at 2,300 rpms. The price is real good, but I know it's a newer motor and was wondering who had experience with them. Dealer support would be good where I will be using the boat, but I'm also looking at the Deere 650hp, which is quite a bit more money.
Click to expand...

FPTMarineDiesel said:
Why not the FPT C13 825 @ 2400 rpm? We have great success with this product in a vast group of hulls.
Click to expand...

You were smart in using the correct gear reduction, but I am pretty sure this project and your other I had many discussions with David on before I left FPT to come home to Maine. Let's make it happen, I am sure David can get this done for you!

Travis- Do you know anyone running a D13? I was curious about the engine and how happy owners were with their engines. Usually Volvo makes a good product.
S

We installed one in a new BB sternpicker, [email protected] mated to a 24" Traktor jet, should sea trial next month. Will let you know how it goes. The D9 has been well received so far. This will be the first D13 in BB boat that we know of. We also looked at MAN, Scania and CAT, but we felt the Volvo had a lot of good features to offer at a good price.

Scott- Do you own the Bay boat that has the D-13? Is it the one Pat Pitsch is building? If so, I was on that boat in Pat's shop back in November- nice looking engine and boat. My next boat is going to have another 9 liter John Deere, but if I ever go bigger, the D-13 seems like a great engine and the quote I got was less money than the 650hp Deere or Scania. Iveco also has a 13 liter in 750hp, haven't got a quote on the Iveco, but I've heard good things about the big Iveco. Post some pictures of your 32' Bay boat, guys on here would love to see it I'm sure.

Yup, that is my dad's boat. I am just the armchair consulting engineer and crew. After 10 years away from the Bay I am going to crew this year to check out the new boat. I keep searching the web for US commercial installs of the D13, but keep coming up empty. It has some good European reviews and sport boat reviews though.

My dad had an 8.1L JD in his last boat and had great luck with it.

a few weeks back interacted with fpt on a different & contentious tread telling him about my experiences with volvo. it was a great engine until it came to support needing any serious parts. i also mentioned my son was in the market for a repower engine and was considering iveco based upon the fpt salesmanship in this forum. in so many words, he blew me off, but i am not a easy blow-off.

looking into support, since my questions to him, has led me to realize there is none except where he is located. no dealers, no parts, nothing. i even went overseas to australia where they are widely advertised. same thing. sell you an engine and then when it comes time for parts, well, thatâ€™s another story. ftp may be doing the same, all sales pitch with a few guys on his side, so i just walked away and decided to look around a lot more. locally where my son is, and overseas, prices and availabiliy are a even worst nightmare. i sure fell sorry for those guys as i was there about 25 years ago.

i even went to mac boring, i think a respected distributor, because they also tried to work with fpt.. maybe I should post their response? does fpt want me to ? or, maybe what came back to me from overseas? just ask and i am at your command..

anyway, to make a long story short, buy the engine based on after sales support & real history, not how good a deal you can get up front. thats what the red iveco salesman did 20 years ago. made you a deal that was hard to refuse, but later, what happened?

remember, engine manufacturers bases much on their profit on when you need parts years from now, not just the initial cost of the engine. also think about resale value. does anyone want to buy a used iveco? i sure don't.

if volvo has good support, then go volvo. for my son, the choice was simple, cummins, as no matter where you look, support is always there whether it be independent or at distributor level. and, answers to a question on many different forums is always just a few clicks away - never any smoke, never any mirrors.

if my son was where you guys are, maybe iâ€™d give fpt it a maybe. and maybe the motor is ok, but in alaska where a fishing season is measured in days and one glitch loses the entire year? better put real live support and a track record in first place, and put hype last in the outfield. maybe up there a 13 liter green engine is the answer?

Was your dissatisfaction with Volvo due to there local support or the company Volvo themselves? I have owned a bunch of volvo's and have good support around me and have never waited longer then a day or two for parts so have been very happy with them and would not hesitate to buy another. I am also not making a living with the engine so it's a lot different.

Scott- Pat sure builds a nice boat, I saw your dad's boat when the Volvo was up on the boat, but not installed yet. I will have my 38' Wesmac out in Bellingham around May 1st, hoping to sea trial it around June 5th. It has a John Deere 9 liter 500hp. My dad and I finished 2- 32' Wegleys in 2011 and both boats had John Deere 6081 375hp engines. I like Deere a lot, but I know Volvo makes a great product as well. I would really like to see your dad's new boat in the water and see how it performs.

Brian- Will keep an eye out for your boat in Bellingham. We hope to be in the water in 3-4 weeks.

What gear and prop did you go with for your setup?

Sounds like a great setup, big prop. What fishery is the boat for?

We wanted to stay shallow on this boat, so the Traktor seemed like a good plan for the HP. Can't put a big enough prop on a BB boat and stay shallow! Always seemed that the tunnel sucked away a few knots too.

I will be using it in the Cook Inlet drift fishery, but it would also make a nice SE or Area M gillnet boat. I have it listed for sale at Alaska Boats, here is a link to the ad http://www.alaskaboat.com/boat.php?bid=gn417 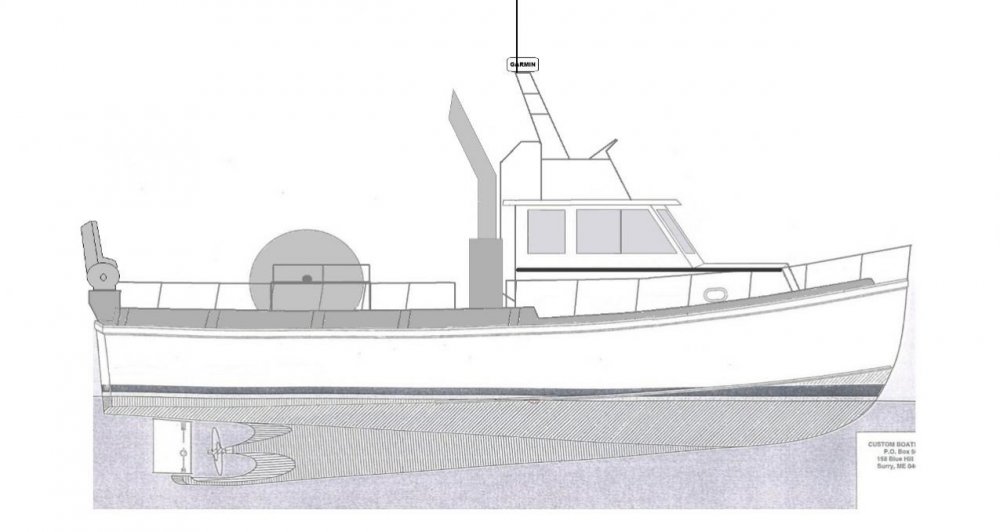 no dissatisfaction withe the volvo engine. it was when it finally wore out, the cost to rebuild was more than the engines cost 10 years earlier. after looking deeper into the fpt product, my conclusion was that would also become a product with dubious rebuildibility prospects & resale value 10-15 years later. volvo has withstood the test of time and if alaska is volvo country, then go green.

Jon- I don't know why you are on an anti-FPT Iveco rant (I thought this was a thread primarily about the Volvo D13), but FPT is going to be supplying Caterpillar with their 9 liter and 13.5 liter engines for marine pleasure use. If CAT is putting faith in the FPT product and selling it as their own, I think it's a product that will likely be around for a while.
S

Wow, awesome boat, I always wondered if more downeast boats would show up as gillnetters. Are you finishing it?

Scotth said:
Wow, awesome boat, I always wondered if more downeast boats would show up as gillnetters. Are you finishing it?
Click to expand...


My dad and I are finishing it, we got the bare hull from Wesmac this past August. There is not a better, higher quality hull available than a Wesmac. I'll fish it in Cook Inlet this season. Last season I finished and fished a new 37' Wegley and sold that right after the season.
You must log in or register to reply here.
Share:
Facebook Twitter Reddit Pinterest Tumblr WhatsApp Email Share Link