By JENNIFER LEVITZ
BOSTONâ€”Commercial fishermen in New England are anxiously awaiting a regulatory vote on Wednesday that could significantly reduce the amount of cod they are allowed to catch, a move designed to preserve and rebuild the stock of the once abundant fish.
Enlarge Image 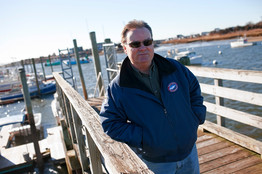 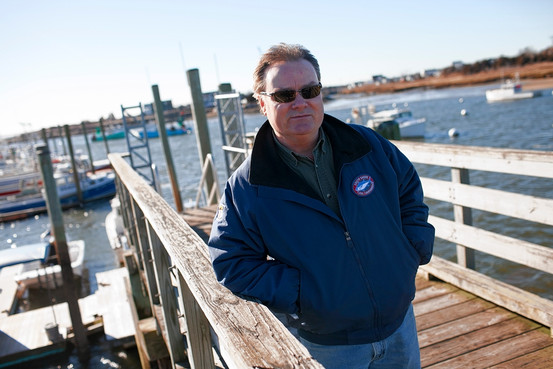 Meanwhile, a separate proposalâ€”aimed at lessening the economic blow of any cuts by opening nearly 5,000 square miles of protected Atlantic Ocean to eligible commercial fishermenâ€”is drawing fire from conservationists and others as potentially undermining the aim of increasing the cod population.
Under the primary proposal by the New England Fishery Management Council, a regional policy-making arm of the National Oceanic and Atmospheric Administration, the fishing industry could see its total allowable catch for certain cod stocks drop 80% from the current level. At the same time, the other proposal to open the areas off the New England coast would give fishermen more places to catch more-plentiful stocks of fish, such as haddock, supporters of the proposal say.
"Restrictions have to strike a balance between the fish and fisherman, and the balance is out of whack," said David Goethel, a New Hampshire commercial fisherman and a voting member of the fishery-management council, which also includes state officials, scientists and other industry representatives.
But conservationists, recreational charter-boat operators and some small-boat fishermen say that allowing commercial trawlers into the protected areas will harm the spawning cod that live there and that swim alongside more-abundant stocks. They call the proposal a short-term strategy that ultimately will set back the recovery of cod.
"These are some of biggest protected areas on whole East Coast, and a lot of it hasn't been fished for more than 15 years; to me, it just seems like a really irresponsible reaction by the fishery management," said Peter Baker, director of the Northeast Fisheries Program for the Pew Environment Group, which is pushing the federal government to do a full environmental review, which would take months. 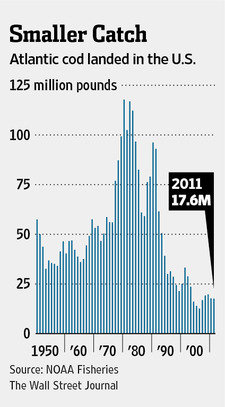 The protected areas that could now be opened were closed in phases starting in the mid 1990s to protect juvenile and spawning ground-fish, including cod. NOAA, which must approve all council votes, has expressed support for controlled access to the closed areas by commercial fishermen but hasn't made a final decision. The quota would take effect for the 2013 fishing season that begins May 1.
Opponents to the opening include charter fishermen, who have been allowed to fish in the protected areas because they use baited lines rather than commercial nets. "It's been the breadbasket for the charter industry for the last two decades," said Steven James, who heads a charter-boat association in Marshfield, Mass. "Now, if they open it, a handful of big steel trawlers are going to move in and get just as many fish as they can possibly pull out of there."
The battle over how to save the cod has become increasingly tense. For more than two decades, the cod population has hovered at dramatically low levels and authorities so far haven't been able to engineer a rebound. And the fish's outlook weighs heavily on the region's economy: Commercial fisherman caught 17.6 million pounds of Atlantic cod in 2011, earning on average around $1.85 a pound.
"This is the most critical time that I'm aware of ever in New England fishery managementâ€”the industry is under a lot of stress," said Rip Cunningham, chairman of the New England Fishery Management Council.
Decades of overfishing were blamed for the near economic collapse of the cod population in the mid-1990s. Assessments then showed that most of the cod were essentially middle-agedâ€”and that there may not have been enough young cod to sustain the stock.
In 2004, NOAA set a 2014 deadline to rebuild Atlantic cod stocks to a level where there are enough spawning fish in the water to reproduce and replace what fishermen take. Fishery officials have imposed regulations on when, where and how people can fish. Strict annual catch limits, or quotas, were instituted in 2007, and fishermen thought they were on pace to meet the target.
But scientists say better technology is allowing them a more accurate, and grim, picture. Recent federal assessments showed that there are only about 32,000 metric tons of spawning stock biomassâ€”the total weight of fish that are old enough to reproduceâ€”off the coast from southern New England north and east to Canadaâ€”less than 20% toward the federal rebuilding goal.
"The bottom line is that we need more fish, and we can't get out of this bind until we have more fish," said NOAA spokeswoman Teri Frady. She said that NOAA is studying whetherâ€”in addition to fishingâ€”changing water temperatures are constraining recovery of cod.
Write to Jennifer Levitz at [email protected]
You must log in or register to reply here.
Share:
Facebook Twitter Reddit Pinterest Tumblr WhatsApp Email Share Link