What kind of bronze for keel shoe & bolts

So I committed to replacing my shoe today after counting the number of holes in it (12 all over) and due to the fact that the rudder bearing I want to use will not be able to bolt to it because it is too short. Just going to be easier and better job to start over. Section is 1/2" C channel 4" x 2". Big fun.

I have heard the correct bronze is referred to as 85-5-5-5 for use in this application but thought I would ask the forums advice.

Also need a good source for silicon bronze carriage/machine bolts. Online or in SW Connecticut if anyone knows one.

You should use a high silicon bronze with little or no zinc. The unified numbering system spec is C65500. This type of bronze holds up the best in marine applications. Your reference to the old school SAE numbering system may or may not be correct. I have found that most companies are using the unified system. Zinc in the bronze can become subject to a dezincafication process, a form of corrosion, which is why you want to avoid it. Phosphor bronze or aluminum bronze would be my second choice. Here is a link to just one of many distributors. Atlas Metal Sales
Last edited: Dec 7, 2013

Not sure if they will have this type of bolt but I just rebuilt a trailer and used BOLTDEPOT.COM (Weymouth Ma.)

Bolts on my boat had their heads corroded out from the inside sort of so all that was left was the threads and sides of the bolt heads but the metal inside was mostly missing on a number of them but enough that I think the smart move is to start over on each. Looked like someone tried to drill out the heads.

Probably a long term bonding issue but want to start with the right stuff so will check out atlas.

Is there a specific spec for bolts?

Jamestown Distributers, they are in Bristol R.I. has a good selection of silicon bronze hardware. Web site and catalog sales too

Robo said:
Jamestown Distributers, they are in Bristol R.I. has a good selection of silicon bronze hardware. Web site and catalog sales too

OK. I will check them out. Just dont want to buy them from some online company and end up with anything less than the best grade silicon bronze for what I am doing..

I too have a 30 ft Sisu. I changed the cutlass about 10 yrs ago. Came out easy. I replaced the set screws and locknuts with silicon bronze from Jamestown. They are still like the day I put them in. To my knowledge, they carry good stuff. Call them and talk. Their store in Bristol has a lot on the shelf if you want to see it first hand

To hijack my own thread. What grade of stainless should a rudder be made of?

Toolate said:
To hijack my own thread. What grade of stainless should a rudder be made of?
Click to expand...

Thats what I thought. Was hoping you would chime in. THanks (again).

So after a bit of searching we are having trouble finding a 1/2" thick, 1 1/2" x 4" C channel. I can find flat bar stock up to 1 1/2" thick easily so may just go with a 1" bar but thought I would see if anyone has a source they know that actually has silicon bronze (c65500) C channel in stock - could go larger on the thickness but the width should stay at 4".

1 1/2" high x 4" wide, and the web is 1/2" thick? How long is it? A lot of those odds and ends were custom cast for the builders. I like the plate idea. But if you need the channel for obtaining a good fit, you can always machine one from a piece of bar stock. Maybe Buck Algonquin might have the cast c channel? As a wise man once said "show us a picture!" (Who could that be?)

Keelboater said:
1 1/2" high x 4" wide, and the web is 1/2" thick? How long is it? A lot of those odds and ends were custom cast for the builders. I like the plate idea. But if you need the channel for obtaining a good fit, you can always machine one from a piece of bar stock. Maybe Buck Algonquin might have the cast c channel? As a wise man once said "show us a picture!" (Who could that be?)
Click to expand... 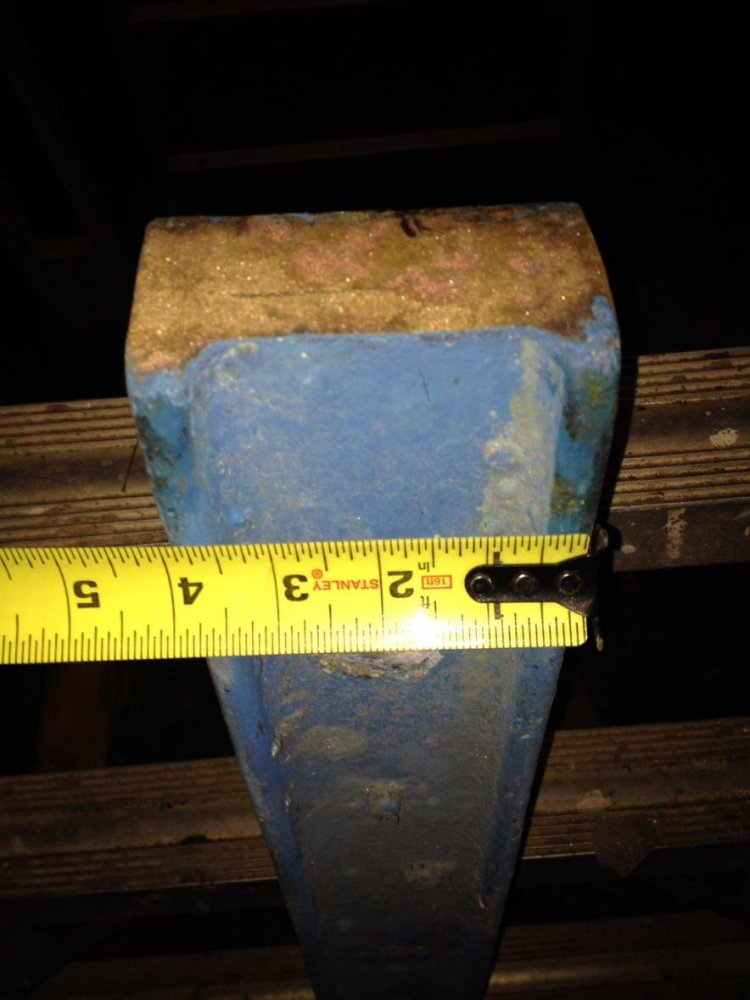 Gurryman said:
What is the problem with the shoe that you removed? An elongated hole can be repaired, will be a hell of a lot cheaper than a new one.
Click to expand...

The real problem is that my old one has a total of 12 odd holes in it and it is a bit too short for the new plan which includes using a bolt on skeg bearing from tides marine. I know I could fill the holes etc. but with all that I have done on this boat, I just feel like I should start fresh. Also, for me to have a welder repair it, the costs will probably come very close to the cost of the new bar.

Side shot. You can see where I cut the bronze away around the old skeg bearing to get the post out (that was before I decided to take it off). Hole was egged out a least 1/2" bigger than rudder post. See how close the post is to the aft end of the the channel? Bolt on skeg bearing is 4" O.D so need another 1 1/2" to get the bolts to be in some good meat and not too close to the edge.

Dont have another pic but the top view on this thing looks like Swiss cheese. Holes were from 3 variations of zinc, prop cage, and who knows what else.

Here is a confession too. I mocked up a 20" prop in the existing opening and the shaft is positioned so that the tip clearance is about 1 3/4 at the top but was going to be like 3/4 at the bottom between the shoe and prop. In the interest of increasing this I am going to pad the bottom of the keel down with some glass to make the shoe angle down slightly so that I gain another inch in the prop opening. Rudder will be new so I can just make it to fill the height when its done.

Plan was to just fiberglass the surface where the shoe meets the keel from nothing at the forward end to about 3/8" at the aft end essentially making a shim. Probably make it big and then grind it smooth to fit the new bar and get the clearance I am after. This will also allow me to relocate the holes in the boat (or at least one) so that I can actually get a bolt in the hole since the aft most hole is pretty much un reachable. It looks like the hull was molded in one piece (not two halves) and the shaft tube and lowest portion of the keel were glassed on later because there is a slight seam/depression visible around the last 6' of the keel and its too perfect to be a repair.

Really not that much more work in the scheme of things and would allow me to fit a 20" prop instead of maybe 18 or 19. Keel shoe would actually sit about 1 1/2" lower at the aft most end compared to the way it was. 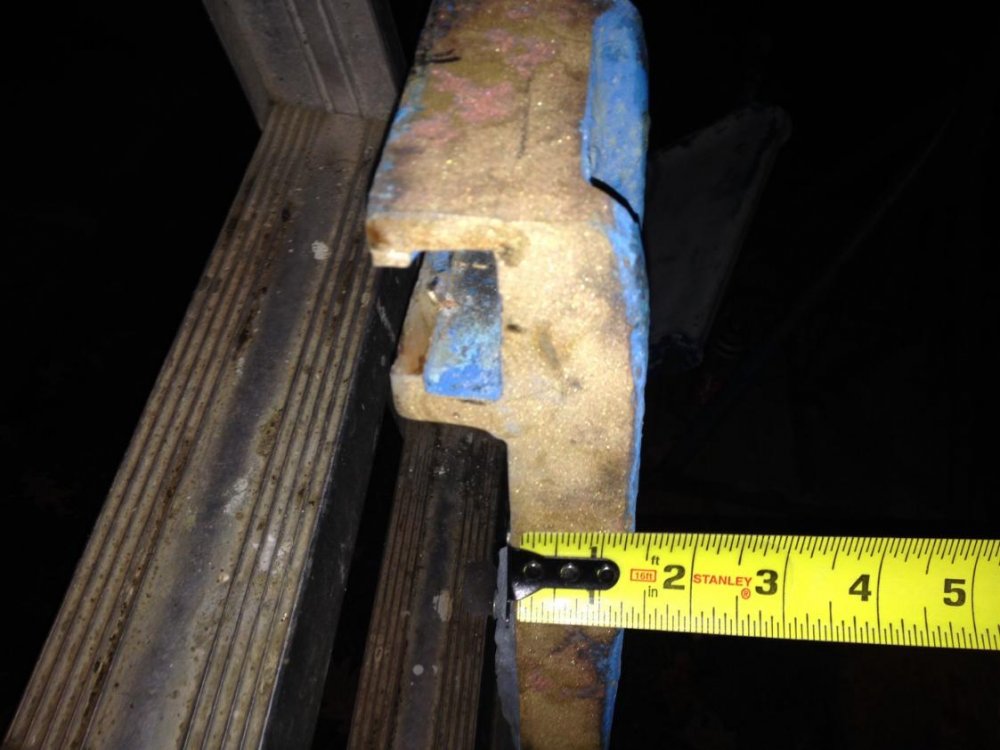 If you can't find a direct replacement. I could make a wood pattern with the modifications that you are suggesting and have it cast at a local foundry in manganese bronze.

Gurryman said:
Great Idea! make the bottom of the rudder post the deepest part of the hull

I have no problem trying to gain efficiency, but you will probably not fully use it once you start pushing that boat at speed. Your throttle arm will retract as your wallet does.
Click to expand...

I agree on the throttle idea but I am only making the aft end of the keel slightly deeper than it was. It was the deepest part of the boat already since it runs slightly downhill going aft (compared to the water line).

South Shore Boatworks said:
If you can't find a direct replacement. I could make a wood pattern with the modifications that you are suggesting and have it cast at a local foundry in manganese bronze.
Click to expand...

Waiting to hear from Buck on the cost but it looks like they carry exactly what I am after. I could make a wood pattern and ship it up to you- any idea what they would charge roughly? I think the bar stock is going to make more sense in terms of cost but who knows.

Thanks for the offer/help!
S

The cost for a new wood pattern is $ 150-200. It is difficult to estimate the cost of the casting as the foundry bases their prices on the weight, as well as the size of the flask that is required for the sand mold. I would need a dimensional drawing or the existing shoe to show the foundry. I wish I could give you a firm cost but for " one off castings" this is how the process works.

Yes- no suprise. I think the 1" x 4" bar stock is going to cost me $600 or so and I cant imagine the casting, not to mention the shipping, would be much more than that.