Which hull has best stability?

Curious as to what you guys think. Which hull in your opinion has the best stability while drifting and on anchor? The least amount of rock n roll?
C

yeah, that's what i was gonna say. maybe one of those louisiana boats.

pugsley said:
yeah, that's what i was gonna say. maybe one of those louisiana boats.
Click to expand...

Is that new "blackfin/northcoast" hull improved over the older ones? They rock like a basatard on the drift. Especially with a tower LOL

Badlatitude said:
Is that new "blackfin/northcoast" hull improved over the older ones? They rock like a basatard on the drift. Especially with a tower LOL
Click to expand...

Hard chine, flat bottom, lots of beam. Start with a barge and work back....
E

The Coast Guard inspector said the Lowell 43' was the most stable boat he inspected in 25 years. That's got to hold some weight on this forum!

not a downeast but most stable boat iv been on was this 44x21or22 leblanc. we ve hauled gear in 30 knots of wind and she sat like a champ. when the captain picked the boat up in bay of fundy the previous owner said they used to long line sword fish for a few months a year and lobster the rest. he said one trip they were out swordfishing and lost power in a storm and had to lay too in 50knots for a 2 days till they got towed in. she didnt roll over in 20 footers! 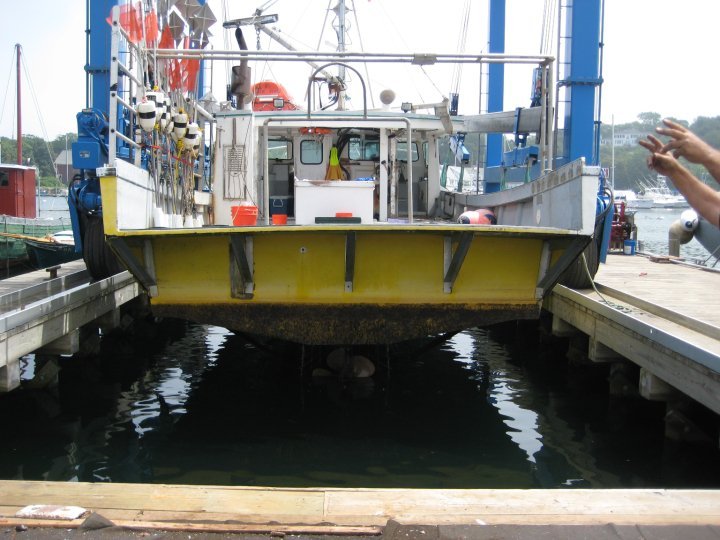 The most "stable" hull is one which returns quickly to an upright position without repeated rolls in the opposite direction after being subjected to a heeling force due to wind, waves or a loading condition. Some hulls are so "stable" that they "snap" upright, making them difficult or impossible to stand on or work in some conditions.

Other hulls may roll to a greater degree, but they roll more slowly and predictably, often making them easier to stand or work on in those same conditions.

In both hulls, the vertical center of gravity is critical in determining the initial degree of roll as well as the speed of the roll and the tendency for repeated oscillations. Two identical hulls with identical layouts and power, but one set up as a lobster boat and one set up with a flying bridge and tower will surely have different roll characteristics. I think it would help if the OP states more specifics. It would produce a more meaningful answer.

In any case, it's a subjective judgement, dependent on the individual's perception of what he's experiencing. A snappy, "stable" hull for one guy may be completely unacceptable to the guy who prefers a little deeper but easier roll.