why did atlantic boat company get rid of bhm molds?

Blitzen said:
You only get one chance in life to make a first impression with people and it can be very difficult to change that impression after the fact, whatever the case may be. The money can come from the least suspecting people.
Click to expand...


Well said, that's business 101. If someone has a product I'm interested in, I'm usually willing to give them a second chance to redeem themselves, but when you detect a bad pattern, it's best to run away. Wesmac earned my business because #1-their product is as good or better than anyones, and #2-Steve treated me like I was going to spend $2 million on a boat, when he knew I was only interested in a white bare hull. The same could be said of Stewart Workman (Calvin Beal boats) and other builders I have encountered.
B

MouseTrap said:
BHM21, thank you for stepping-up and posting on this forum! For the record, one of my favorite looking boats is the Duffy 31. This thread was not the most loving discussion about ABC's perceived customer service practices. Any comment on that perspective?

Not the greatest way to make an introduction, I know. Just interested in hearing from the horses mouth, so to speak.
Click to expand...

In 2009 our business dropped for 4.5m a year to 750K. I was scrambling to keep things going. I went form 45 employees to 3. In 2010 I made the decision to close it down but was looking for someone to buy it to save it. I did not want to say we were not doing business because that starts the rumor mill and its hard to get going after that, but an occasional kit boat is a break even proposition at best for our operation, so I really was trying not take on anything that would add pressure to the cash flow. I had gelcoat guns and resin guns that need to be replaced and couldn't spend the money on, for example, and many other complications Iâ€™m not going to go into here. In Aug of 2010 I made the final decision to close before I would have started hauling our 75 winter storage boats. In September a buyer came forward but it took three months to get the transaction done. So in 2011 we started out putting things back together with a small crew. Our first priority was to get the service business going again but I immediately sold a very custom boat building job that took up the majority of the next 8 months of my time while also trying to get a new owner up to speed, be the salesman, the estimator, the designer and so forth. Winter of 2011 / 2012 for personal reasons I started working from home (as well as doing a fair amount of traveling bidding jobs). Bill Sweetland our long time former salesman was at the yard acting as GM and could talk knowledgeably to any of you guys who stopped by unexpectedly, or if you actually called ahead I would met you there. That was in until March of 2012 when Bill fell out of a boat backwards 12 feet and broke his neck. He as out for six months and is just now 11 months later up to working 20 hours a week. Fortunately around that time we hired a super capable service manager, John Pratt, formally the mechanical boss at Hinckley for 30 years, who has worked out very well, but he is not a Duffy guy, if you stopped in announced I would be there to meet you, if not John would be of limited help. - As to getting a price on a kit - The new owner of Atlantic, Si Hannon is a very savvy, very detail oriented business man. He requires from me very detailed information from me on everything I quote. This has required a complete re-write on the quoting system at Atlantic Boat. Getting a handle on the finished boats has been the first priority, we are there now. I can quote, or at least pretty accurately ball park, everything that is not super custom pretty quickly now form 26 to 56 feet. I have also recently completed a through review of the kit boat stuff so I am more comfortable giving out pricing. We also have been implementing a lot of changes to try to get the pricing down while increasing the quality. - I sorry I have pissed you guys off, I obviously should have handled things better but these last three years have been hell for me, I haven't told you the half of it. - Atlantic is now on stable footing, we are a debt free company. We have a crew that consists of laminators, boat finishers, electricians and mechanics that have all worked for us for over ten years. Since the new ownership we have built two very custom boats that rate in the top ten in quality of the more than 100 complete boat projects I have been involved with, as well as 5 Duffy 26 launches and even a few kit boats. I am at the yard at least one day a week and I always accommodate personal tours any day of the week for people who call ahead.

powderpro said:
Wesmac earned my business because #1-their product is as good or better than anyones, and #2-Steve treated me like I was going to spend $2 million on a boat, when he knew I was only interested in a white bare hull. The same could be said of Stewart Workman (Calvin Beal boats) and other builders I have encountered.
Click to expand...

That is good to hear. It really gives you more confidence in spending your money with them.
Last edited: Feb 4, 2013

All I have to say is... wow, and, thank you. I'm glad to hear that ABC is back on track! Thanks again for joining the discussion.

BHM21- Most all of us can relate to the struggles involved with the 'New normal'.
Congratulations on meeting your various challenges and coming out of the tunnel on this side of the turf professionally and personally.
Good luck with the new configurations in your endeavors.

Solid glass hull, balsa cored top unit. How many do we need lined up to make it feasible to bring that mold out from the back and get it spruced up?
B

Solid glass hull, balsa cored top unit. How many do we need lined up to make it feasible to bring that mold out from the back and get it spruced up?
Click to expand...

Solid white hull, balsa cored workboat top, 8' both sides -$37,500.00ea for one or ten since you guys are so congenial we will congenial the clean up.

Keith built a nice 36' BHM for my brother in law quite a few years back. Not to sound bias but I thought it was the nicest looking one I ever did see. The boat was powered with a CAT 3406 which was rated at 540 HP, had lots of goodies including tower and stand. The boat had a Pacer pump for the slush tank below deck and cruised easily at 18 knots through anything.

The boat was cherry and then sold to another local guy who unfortunately hit a rock and sank it (yup, a ledge at 18 knots) and the ledge won. Hard to believe because the boat was built like a bricj Sh^t H&*Se. I just took some pictures of pictures with my phone so the quality may not be the best.

this is a fairly new bhm from abc.
maybe 6 years old give or take.
looks like a 36? 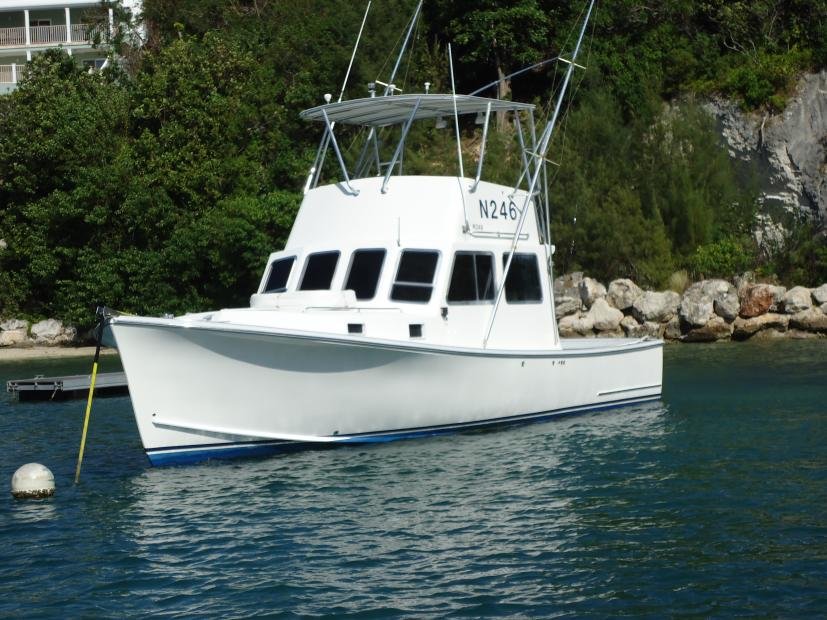 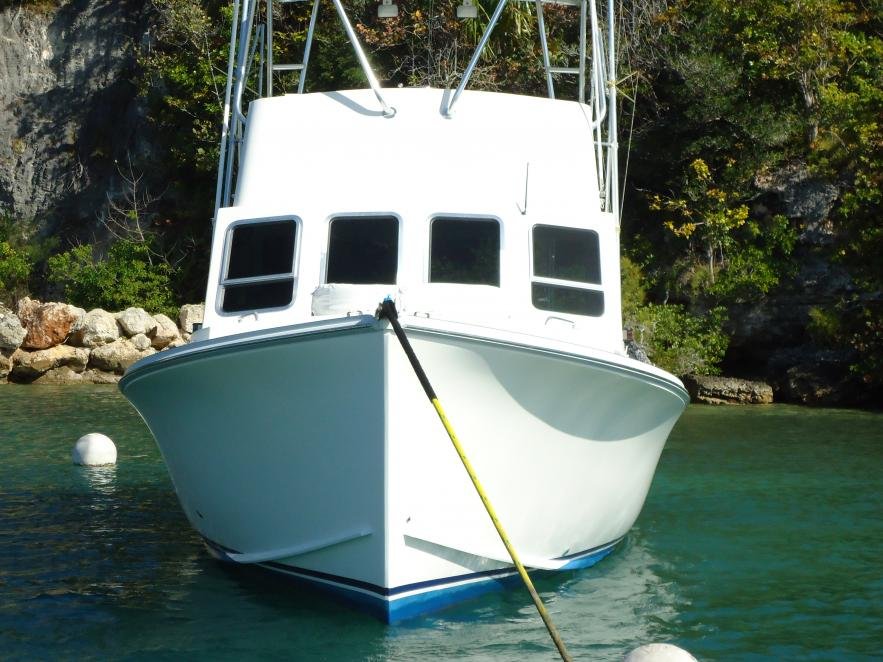 Thanks for jumping in Nate! I could see this discusssion heading off into LaLa land...at your expense.

I'll say it again, I was more than satisfied with the build Atalntic Boat did for us. Jessie-Lin was finished almost a month early, communications with Nate were daily as each and every detail was discussed. I'm a real detail oriented fussy bastard who can't accept anything less than perfect when it comes to mechanical things. Nate and his crew exceeded my expectations and that was during their transition period and an ownership change.

If I was to build another boat Nate would be my first call.

Post- wasn't yours the 31' stretched to 33', blue hull? If so, that was a sweet boat. It would be great if Atlantic can turn things around and start producing the great designs they have.

Jessie-Lin is the 31 stretched to 33...a good example of what those guys at Atlantic Boat can do.

8943post said:
Jessie-Lin is the 31 stretched to 33...a good example of what those guys at Atlantic Boat can do.
Click to expand...


Why the stretch job?

blackdiamond296 said:
Why the stretch job?
Click to expand...


It made a good boat even better, in my opinion. More room, more flotation, more boat.

powderpro said:
It made a good boat even better, in my opinion. More room, more flotation, more boat.
Click to expand...


More speed. large and roomier cockpit. Plus I couldn't afford to build their 35!
S

looking for a Maine down east hull for an inboard diesel, around 25 feet in length...yacht finish...any recommendations on hull, designer, contacts etc
S

mudhake said:
I bought the 25 and 28 bhm moulds from atlantic boats in 1999. they would not sell trhe 31 or the 36 to me. The 31 sat outside under the pine trees and thats where they are. What a shame.I have built 55 of the 28s since and a dozen 25s since then and wish I could of made a deal for the 31. With a little bit of tweaking and a little alterations the 31 would go. ask travis or his father.
Click to expand...

what hull molds do you build from and who was the designer...do you do kits and are you able to show a profile view of the sheer

Just read this old article with interest. My 32BHM is one fine vessel. I've felt safe in all conditions that I've taken her out in. The JD6068T pushes her fine. The Evolution Drive has been flawless. We will keep the memories alive - - -
J

Interesting article, I believe I now own the 36 from Bellingham WA that was spoken of in the course of conversation. Hopefully the molds haven't gone completely to crap and will be used again.