After 2800 hours with zero problems. I have both motors out for rear main seals, oil pan gaskets, and general oil drips.
The yanmar manual recommends liquid gasket called "Three Bond 1207C" for all the required seals. Is this the best liquid gasket to use for this?

Also seeing that they are out, what else should I be focusing on for inspection or maintainence?
I was going to check the valve lash. Replace impellers. Clean out all the water passages. Replace hoses.
Should I disassemble and clean the turbos?
Any other suggestions?
B

If its out I'd crack and service all coolers as well as both water systems. Probably take a good look at both the raw water and circulating pump and maybe pull the starter and solenoid and clean up any corrosion or rust on them.

Basically pull off everything you can while its out and you have easy access.

Oh - if it were me I'd add a Wolverine engine heater pad to the bottom of each oil pan and have smokeless startups and a warm engine room asd a result.
C

Yanmar 240s are not known for pan leaks & rear main seals. Was your boat a repowered? Sometimes on a repower or even new install you have to vary the pan capacity a little. You may be carrying too much oil based on the angle the motor is seating on the mounts. With oil I would rather be down a quart than over a quart.

Replace all sweet & raw water hoses, they are easy to reach with the motor out.
2800 hours I would clean the raw water system with:

Stuff works great with no disassembly. My Yanmar started to temp creep a little. I did the reverse flush & like magic it was done!

Valves you are do for a check.

Also if your transmission oil cooler is original with no zinc pencil I would replace it.

Lastly, I would remove the engine oil drain plug. Tap it and put a high pressure hoes on it. It makes oil changes easier that the dipstick pull.

Antifreeze every other year.
F

The motors are not original to the boat. The boat is a 1984, the motors are 2000. One of the motors I was told siezed and was replaced at some point with a reman.
This is the starboard. Factory new motor. just started leaking this season in the rear-main area. You can see at about 10oclock in this picture running left to right, there is an oil passage/Oring sealed chamber where the oil was leaking out. 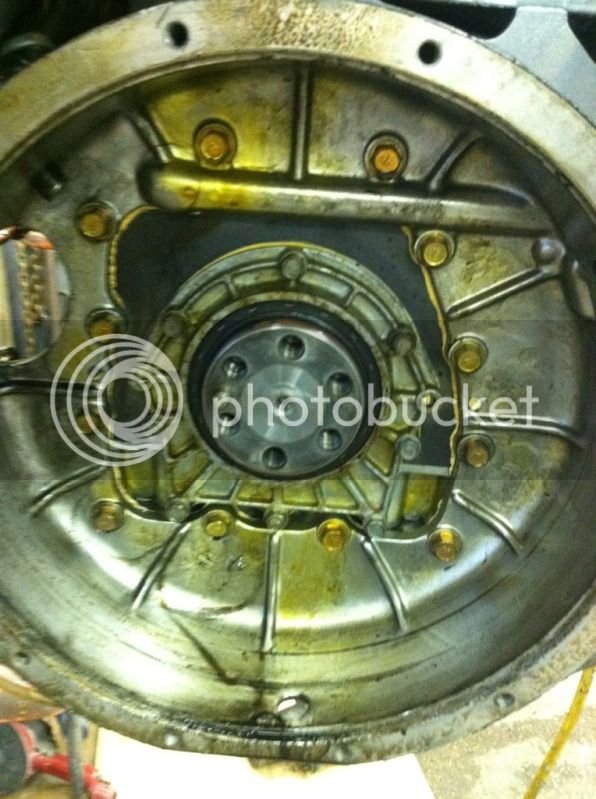 This is the port motor, the reman. Looks like red silicone liquid gasket here. This motor was leaking pretty bad at the rear main area. You can see the oil still pooled up against the block/bell housing

Again the port motor with the red silicone.

There are some small leaks I can see from various hoses that are adding to the mess, but most of the oil is coming from the rear main. I was going to do the oil pans just because ease of access now that they are out.
The specs on the motor call for 10.0 liters( 2.625) gallons.
When I change tho oil I have been just using 3 gallons the filter holds more than a quart so possibly they are overfilled a little over spec. I've never thought about the running angle and oil level, are you suggesting I under fill them and if so how much under capacity?
Last edited: Dec 23, 2012
C

Once completed & re installed I would start to add oil, two gallons for a start. Next check the dipstick. I believe there are two your motor. I would use the short stick on the port side. Keep adding one quart at a time until that stick reads full. If it is not reading full went you get to 2.65 gallons. STOP & mark the stick. 3 gallons is too much. That might be your problem. Remember better a qt. low that high. These Yanmars are very high tech and you could be over filling the pan and building pressure that defeats the seals. What type of boat are these motors in?
F

32' Wellcraft coastal. So that's 2.6 gallons Including the filter?
they are mounted at a pretty good angle and the boat itself runs bow up adding to the angle.

Yes there in lies your problem much too much oil, plus the angle. Mark the stick like I stated. If it reads full at 2.3, 2.4 or what ever STOP! Your are there. Spinning crankshafts at high RPMs with too much oil can even break a crack shaft plus blow the rear main seal. 2.6 is what Yanamr states, however if your stick read full at 2.4 you must STOP. You will not damage the motor at 2.what ever with a full stick reading but you will damage it on an over fill.
F

Ok thanks, will do.
C

Keep us posted & let me know if I steered you in the right direction. The 240 Yanmar is bullet proof and will give you many hours of problem free service. On all repowers we always mark the dip stick and NEVER go by factor spec. Once the stick shows full you are doneâ€¦case closed.
F

Well the short stick is always slightly above the full marks, and the long stick is very hard to get a reading on. It seems like a different level ever time you check it. And always seems low.
I will follow your recommendations for oil level and go from there.
Thanks
E

If I was doing that work, I would use Yanmar seals & sealant. It might be a couple of bucks more but it's worth it. Nothing like OE when it comes to Yanmar engine repairs. Especially with the amount of labor involved on doing it again
C

I agreed OEM all the way!

How bout ya,
That leaks oil because it's not a downeast


Fishbucket said:
32' Wellcraft coastal. So that's 2.6 gallons Including the filter?
they are mounted at a pretty good angle and the boat itself runs bow up adding to the angle.

Hi Capt. Larry
I have a 4LHA-STE 230 in my Fortier 26. I put this engine in the boat in 2001 and have put in 3 gallons of 15-40 Rotella since then.
Aren't these engines the same as the 240?
It lays rather flat and even at top end the boat runs rather flat as compared to the Fishbucket.
So---my main question is--- am I putting in TOOOO MUCH OIL????
I have no leaks and the engine runs extremely well.
Thanks for the very informative info you extend to this site.
Merry Christmas!!!
F

Dr Dude said:
Hi Capt. Larry
I have a 4LHA-STE 230 in my Fortier 26. I put this engine in the boat in 2001 and have put in 3 gallons of 15-40 Rotella since then.
Aren't these engines the same as the 240?
It lays rather flat and even at top end the boat runs rather flat as compared to the Fishbucket.
So---my main question is--- am I putting in TOOOO MUCH OIL????
I have no leaks and the engine runs extremely well.
Thanks for the very informative info you extend to this site.
Merry Christmas!!!
Click to expand...

I've always called them 240's I think everyone else does as well.

Mine also never leaked until I bought them with 1500 hours on them. Slowly they started leaking. Possibly I caused this issue myself overfilling them the prior owner didn't know much about the maintenance o the boat he always had a shop do it.
Last edited: Dec 24, 2012
C

The motor only calls for 2.6 gallons, so yes you are. Over filling the oil pan leaves to much oil in the pan when the crank shaft is spinning, as the crank shafts come in contact with the oil it throws the oil up to lube the underside components of the motor. To much oil puts drag on the spinning crankshaft & additional crank case pressure. As I stated earlier better you run 1 qt low than 1 qt over.
The install in your Fortier is very level and your factory marked dipstick should be pretty close to correct. The best way to properly check you oil capacity is to fill the motor as per the manufactures recommendations. Next run the motor and shut it down. Wait for about 15 minutes to allow the warmed oil to return to the pan. Place your dipstick in. Read the stick and mark it with a file. That is your correct full mark.
C

I've always called them 240's I think everyone else does as well.

Mine also never leaked until I bought them with 1500 hours on them. Slowly they started leaking. Possibly I caused this issue myself overfilling them the prior owner didn't know much about the maintenance o the boat he always had a shop do it.
Click to expand...

captainlarry84 said:
One more thing. On your repower are two mounts on the motor and two on the gear? It is not good having all four mounts on the motor. Install such as this can also lead to tranny & pan leaks.
Click to expand...

Mine are too.
Thanks
F

Here's both dipsticks pulled from a motor sitting flat on the ground
The short stick is overfilled and the long stick is under. Thus adding to the confusion

I have always gone by the long dipstick. Treating the short stick as a quick-check (no catastrophic oil loss check)
Going by the long stick 3 gallons will get it to the full line.
Live and learn I guess